BACK TO ALL NEWS
Currently reading: 2017 Kia Stinger priced from £31,995 in the UK
UP NEXT
Out of character cars: Nissan Nismo GT-R vs Toyota GR Yaris vs Alpine A110

Diesel engine joins two petrol units; top of the pile is a turbocharged 3.3-litre that packs 360bhp and can accelerate to 62mph in 5.1sec
Share
Open gallery
Close
Share story 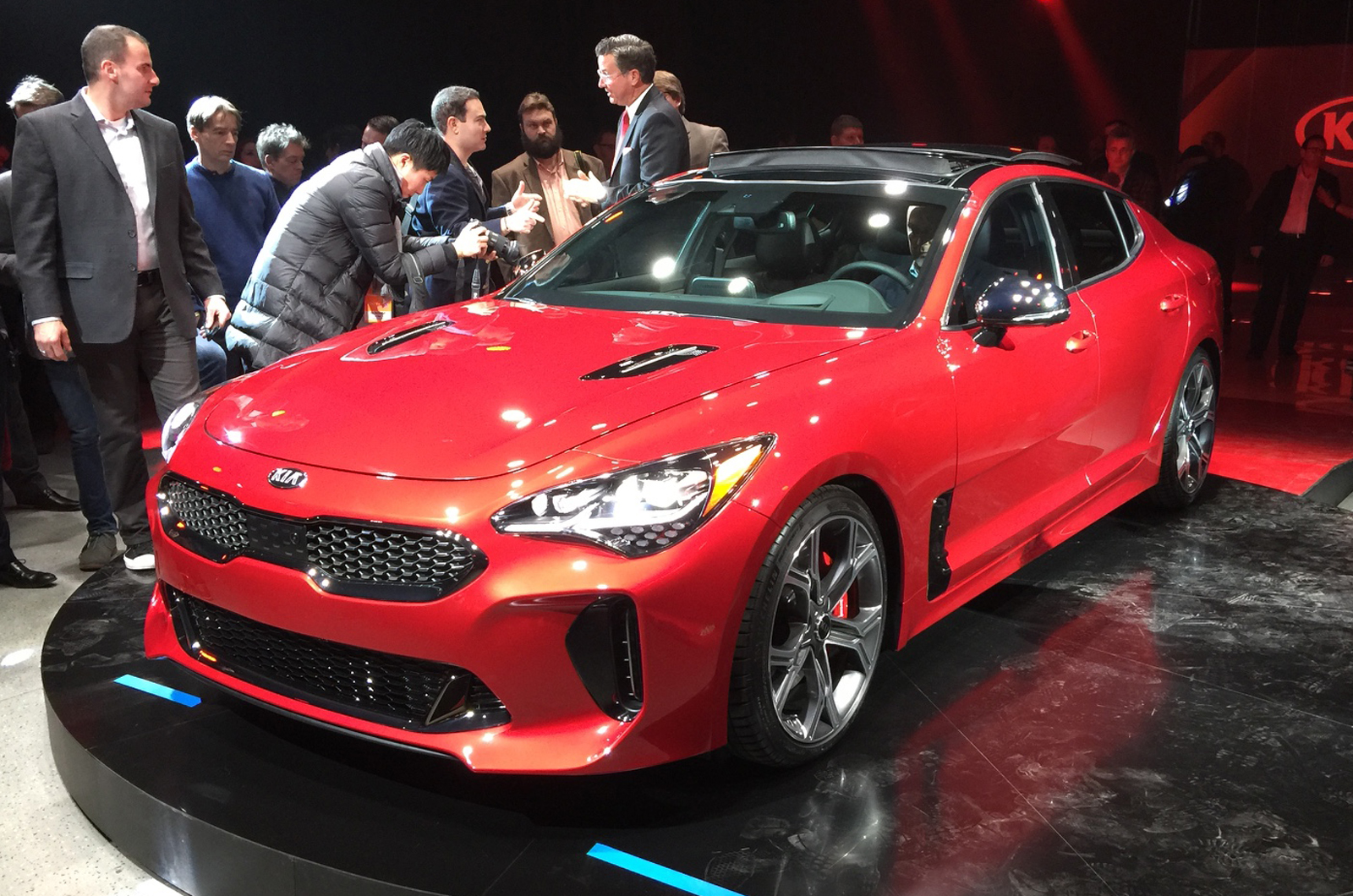 Mid-range cars are expected to be the best-sellers, with a bias towards diesel engines. Overall, there will likely be a 60/40 split in favour of diesels. Sales begin on 1 January 2018, with deliveries beginning at this date too, and monthly prices are to be revealed nearer the on-sale date. Kia plans to sell around 1800 in the car's first year.

Europe's entry engine is a turbocharged 2.2-litre four-cylinder diesel that produces 197bhp and 325lb ft of torque - the latter figure is available from 1750-2750 rpm. It can accelerate the car to 62mph in 8.5sec and onto a top speed of 158mph. 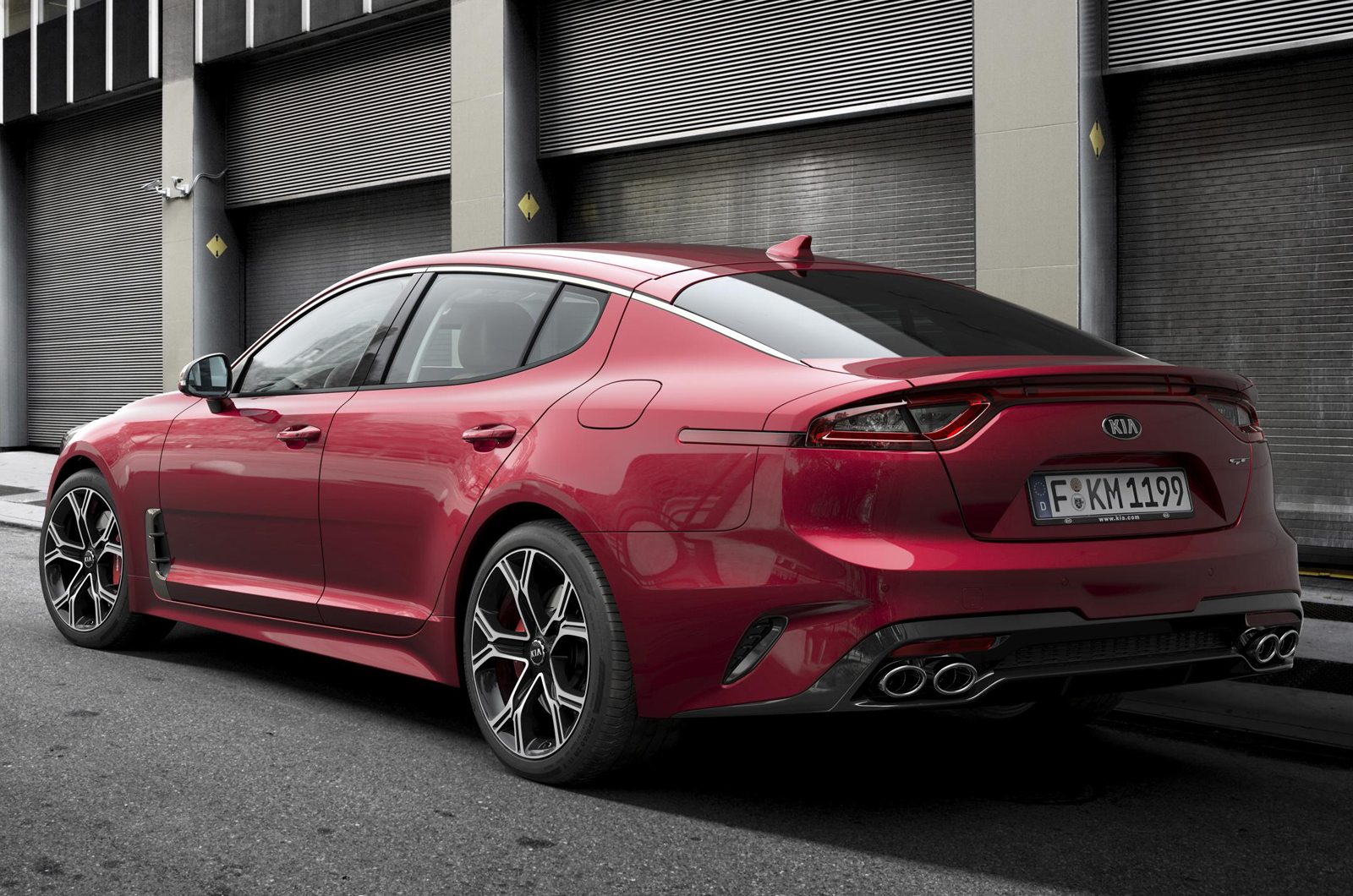 Above this sits the first petrol engine, a turbocharged 2.0-litre four-cylinder that produces 252bhp and 260lb ft of torque. No straight-line performance figures have been released for this unit yet, but it's expected to be slightly quicker than the diesel.

Top of the range is the turbocharged 3.3-litre V6 petrol engine of the Stinger GT. The GT is aimed squarely at more potent versions of the Stinger's rivals, although it sits below the likes of the BMW M3 and Mercedes-AMG C63. Its engine produces 370bhp and 376lb ft of torque and can accelerate the car from 0-62mph in 5.1sec, meaning the GT can outpunch the 349bhp Audi S4. Kia targets a top speed of 168mph for the GT.

Both rear and four-wheel-drive versions of the Stinger are available, and the car has an eight-speed automatic gearbox as standard.

The Stinger has been honed at the Nürburgring under the watch of Albert Biermann, who was poached from BMW’s M division in late 2014. In fact, the BMW 440i has been used as a benchmark. It is closely related to the GT concept of 2011 — a car that Kia says it never lost sight of in the intervening years and always intended to use as inspiration for a production car.

Kia Stinger range to diversify with diesel and electric power

Underpinning the Stinger is a modified Genesis chassis, 55% of which is made from lightweight high-strength steel for what Kia claims is a rigid chassis with reduced levels of noise, vibration and harshness in the “quiet cabin”. The suspension features MacPherson struts at the front and a multi-link system at the rear, and is claimed to have been tuned “to provide optimal feedback to the driver”.

The suspension is adjustable with adaptive damping, a Kia first, through a system called Dynamic Stability Damping Control. Kia has tuned the system to offer agility through the corners as well as high-speed stability. 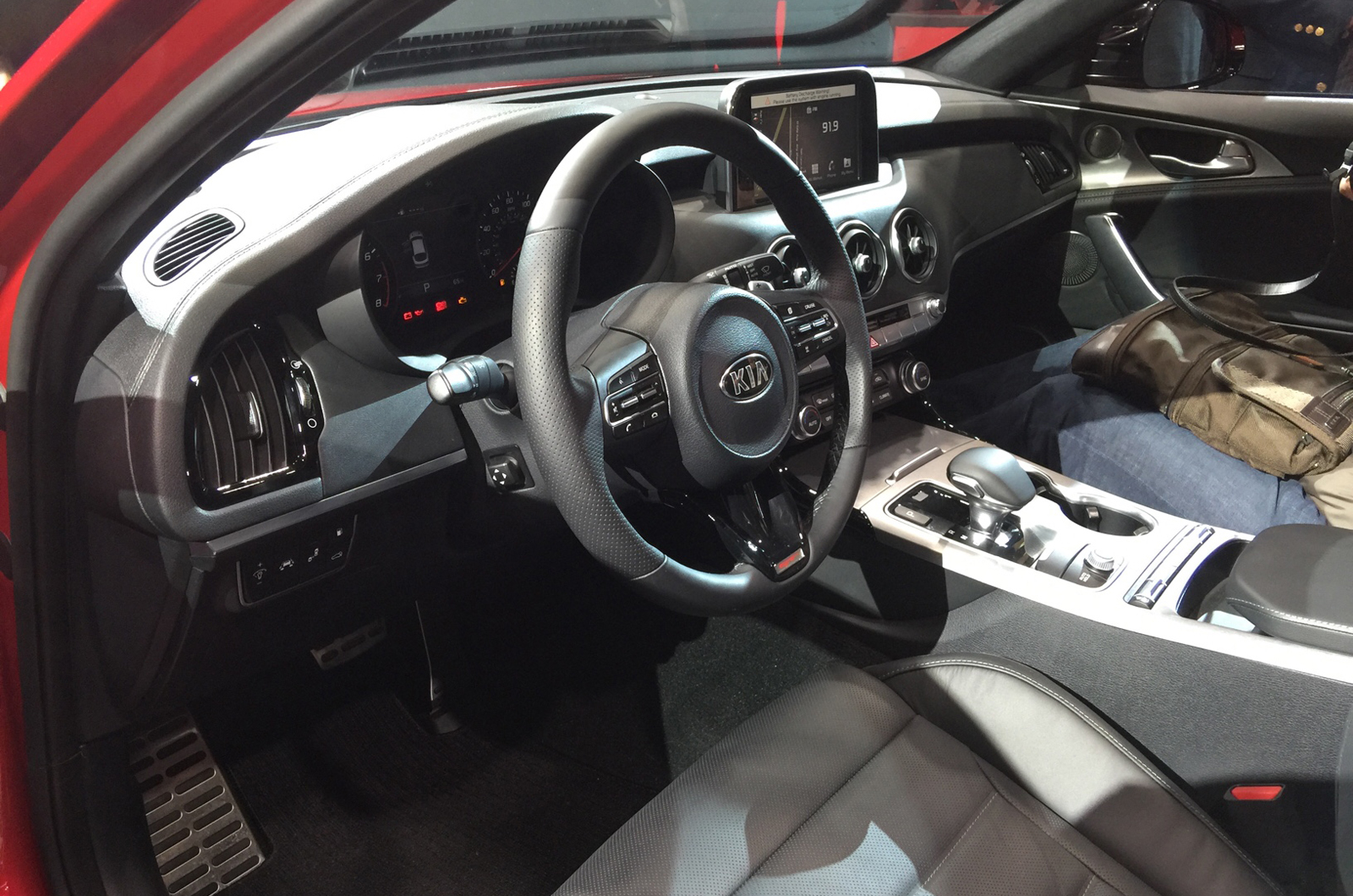 For the first time, Kia will offer switchable driving modes, with five settings on offer. These modes adjust not only the firmness of the suspension but also the responses of the variable-ratio electric steering, which has the motor mounted directly on the steering rack for what Kia claims are improved responses and feedback and reduced vibrations.

Pricing for the V6 Stinger GT has not yet been confirmed, but it is expected to be in line with that of a top-spec Sorento, which costs £49,050.

Describing Kia’s latest creation at its launch earlier this month, Biermann said: “I think for the Kia brand, the Stinger is a special event because no one expects such a car — not just the way it looks, but also the way it drives. It’s a whole different animal.”

Speaking to Autocar in Detroit, Biermann described the car as an excellent all-round gran turismo car rather than an out-and-out track car. "It's a really sporty car but still a good all-rounder. It has a high handling level but is still comfortable and has a spacious interior." Stability was also a key part of the GT's appeal, he added, and the confidence it inspired when you pushed it. Biermann said that he hoped the Stinger GT would have an impact on the handling of the rest of the Kia range. "We're on the way to do that; we already have some good-handling cars and are on the way to doing more." 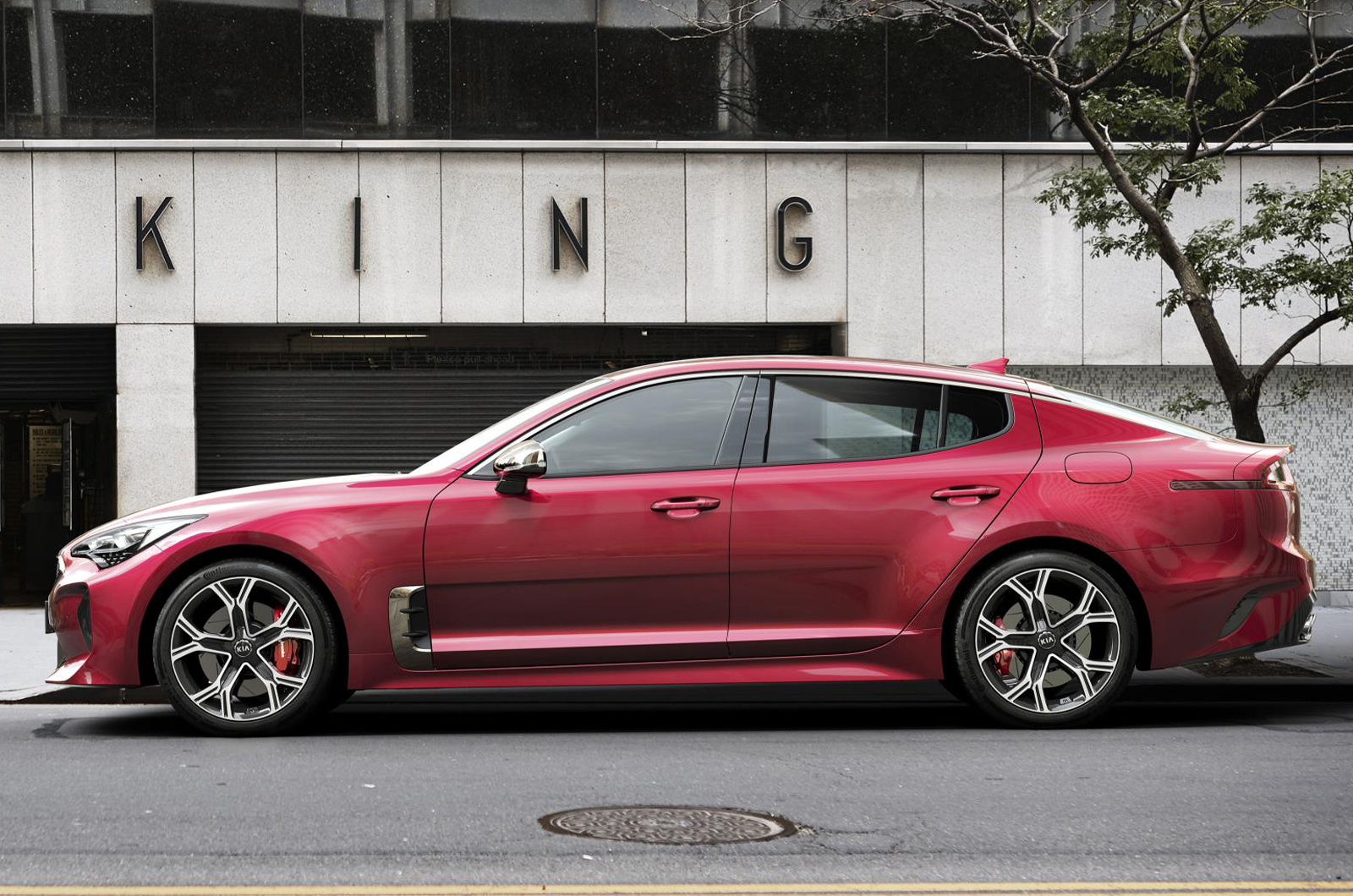 Biermann said the GT had been one of the key reasons he switched to Kia from BMW. "There's this car and a few others. I thought: 'Wow, what an interesting challenge.' I wanted to get them dancing, complete and fun to drive. It was still a concept when I joined, but I guided it. Such a car you never leave alone, you babysit it."

The model was designed at Kia’s European design studio, where it was overseen by Gregory Guillaume. He said: “We were convinced from day one that we would take this concept car [the 2011 GT] from motor show plinth to the road, knowing that we have the freedom within Kia to stretch the brand in many directions. There was no doubt we were going to build it, so it became our halo performance car.”

What can this do for the Kia brand?

"It's a milestone, a strong statement. I think it's a brand shaper. This is a special moment. We're a challenger brand but we have a strong design philosophy. The brand and design already have consistency. This car makes the brand more sporty, more fresh, younger. It shows in that we can compete at a high level with some of the premium brands."

Can it really challenge premium brands?

"The premium brands have a loyal following, but in the US market this is not such a problem. We have a great chance US, which is key for the car."

Did you try and stick closely to the GT concept?

"We had a concept car that got so much positive feedback from media, dealers and customers that we went into looking at it for production and the business case. It got more and more serious. I still remember when we first knew about making it; it was good news for all of us and we had time to really refine the design. Put it next to the concept and you can see it's really close, and in some ways it's even better."

Was it nice to design a rear-wheel-drive car?

"It was a dream to get these kind of proportions, which are possible only with a rear-wheel-drive platform. It's the beginning of a new chapter for Kia; I never want to see an end and we will never be done. We will always go on and open up the doors. This allows us in other segments to make more attractive and sporty architectures and proportions."

Was it design or engineering led?

"It's a design lead project definitely but we can't do it without engineers. We work together with engineering and Albert Biermann. He was so excited when he first came here and has been a big help."

version looks a bit more elegant. Not sure that I would trade to this car with its Audi and Merc interior copycat style. Its probably decent espec the 3.3, plus adaptive ride might be standard and it's is supposed to have a massive boot but I'd get an original. Just no emotion to buying this.

I love the car but what a stupid name. It's a real Stinker

Looks awesome. Hope it'll sell for Kia but the reality will be it'll probably be canned after 2 years. It's too expensive, prices are way too similar to the more established brands. Get one three years old & well over half price.
289 2 October 2017

I saw one at Kia HQ a few months back, it looked really upmarket and had Schreyer's mark all over it.

I felt it mirrored an Audi A7 in look and appeal.

I guess it wont be a big seller....this segment is hardly setting the world alight after all, but it is a halo car and a marker....a marker for how we can expect Kia's to look both externally and internally with Schreyer's expert hand. The future on this basis looks particularly good for Kia!