BACK TO ALL NEWS
Currently reading: Lexus ES revealed as driver-focused £35,150 GS replacement
UP NEXT
Tesla achieves best quarter on record with Q3 performance

Lexus will replace its low-selling GS with the new ES, which costs almost £1000 less than the previous entry-level GS at £35,150.

The ES made its world debut in Beijing before going on sale in Britain from January 2019. Orders open in October for UK customers, although pre-orders are being accepted.

Three specs are available on the new-to-Britain ES - the entry-level, ES-badged car, ES F Sport at £38,150 and range-topping Takumi, priced from £45,650. Takumi gets a power bootlid with kick sensor, 12.3in infotainment screen, premium sound system, heated and reclining rear seats and an around view monitor, while F Sport adds sportier styling, 19in wheels and adaptive sports suspension to the entry-level ES package. Electrically adjustable, heated front seats, 8in infotainment screen and parking sensors are standard from bottom-spec upwards.

While it’s the first to enter Europe, this ES is actually the seventh-generation model, with its forebears having focused on the US market. The new car is tasked with drastically increasing sales in Europe, so it has been designed and engineered to appeal to drivers in this region.

Part of the motivation for this decision will no doubt be the success of European rivals to the ES, such as the BMW 5 Series, which is renowned for its good handling and strong performance. Lexus has therefore engineered the new ES to be significantly more driver-focused than its predecessors. 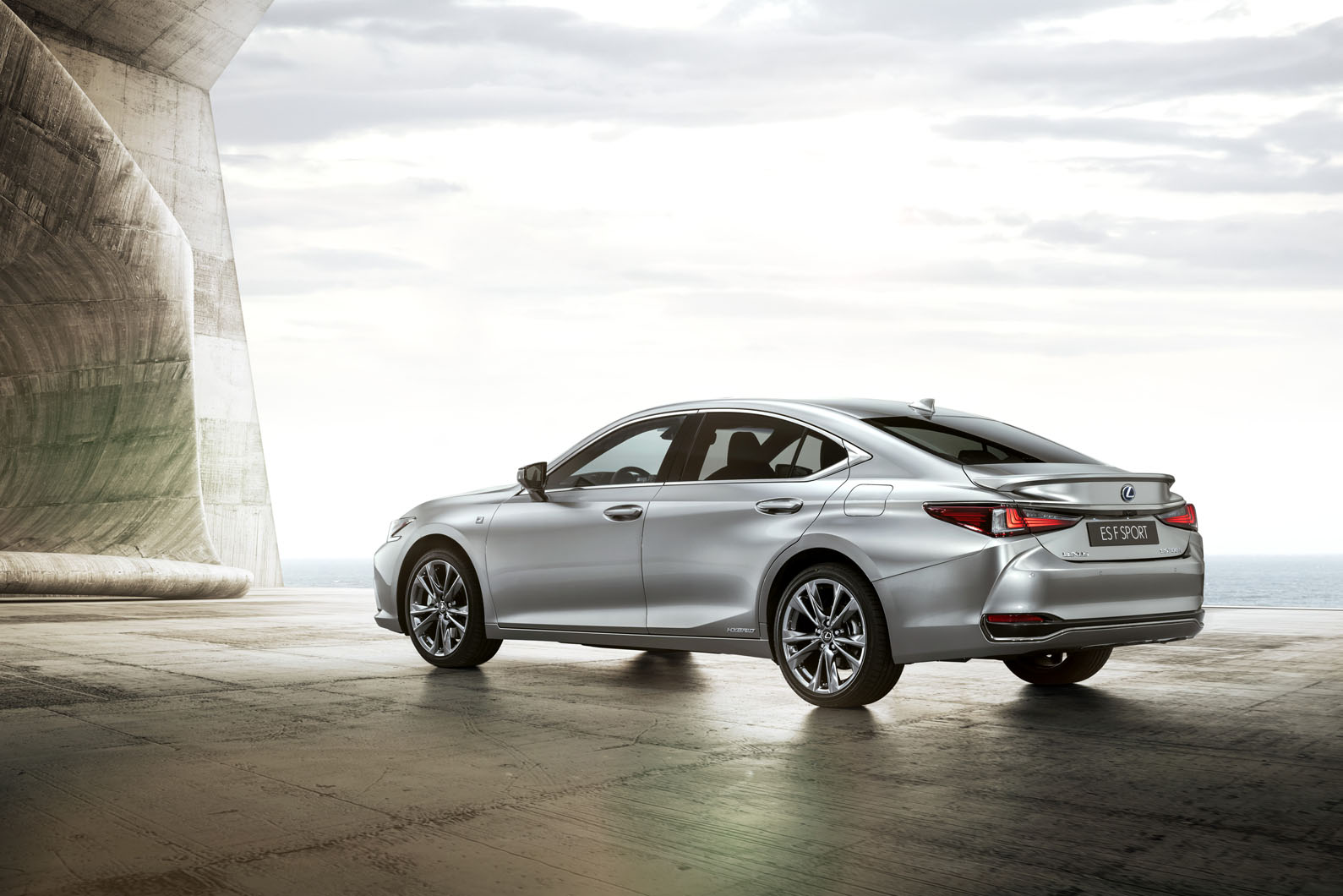 It is built on Lexus’s Global Architecture-K platform, which is a front-wheel drive layout said to offer significant improvements to structural rigidity, as well as more freedom to create a sleeker design. High-tensile steel is used in higher volume than before, helping to save weight, although the car has grown longer and wider compared with its predecessor, while sitting lower.

The new ES features multi-link rear suspension and has a V-brace behind the backseats to enhance handling and precision. ES F Sport models add adaptive damping to this technical layout. It can be manually adjusted through a Drive Mode Select system.

Drive comes from a hybrid powertrain that's based on an all-new 2.5-litre four-cylinder petrol engine. The system is rated to 215bhp and comes with claims of 60.1mpg combined. Lexus said the powertrain is also more natural in its power delivery, thanks to new control software that provides torque in a seamless way.

Pure petrol versions will also be available in ES 200 and ES 250 forms, but these are expected to make up a tiny proportion of sales in Britain, where Lexus customers tend to opt for its electrified models. 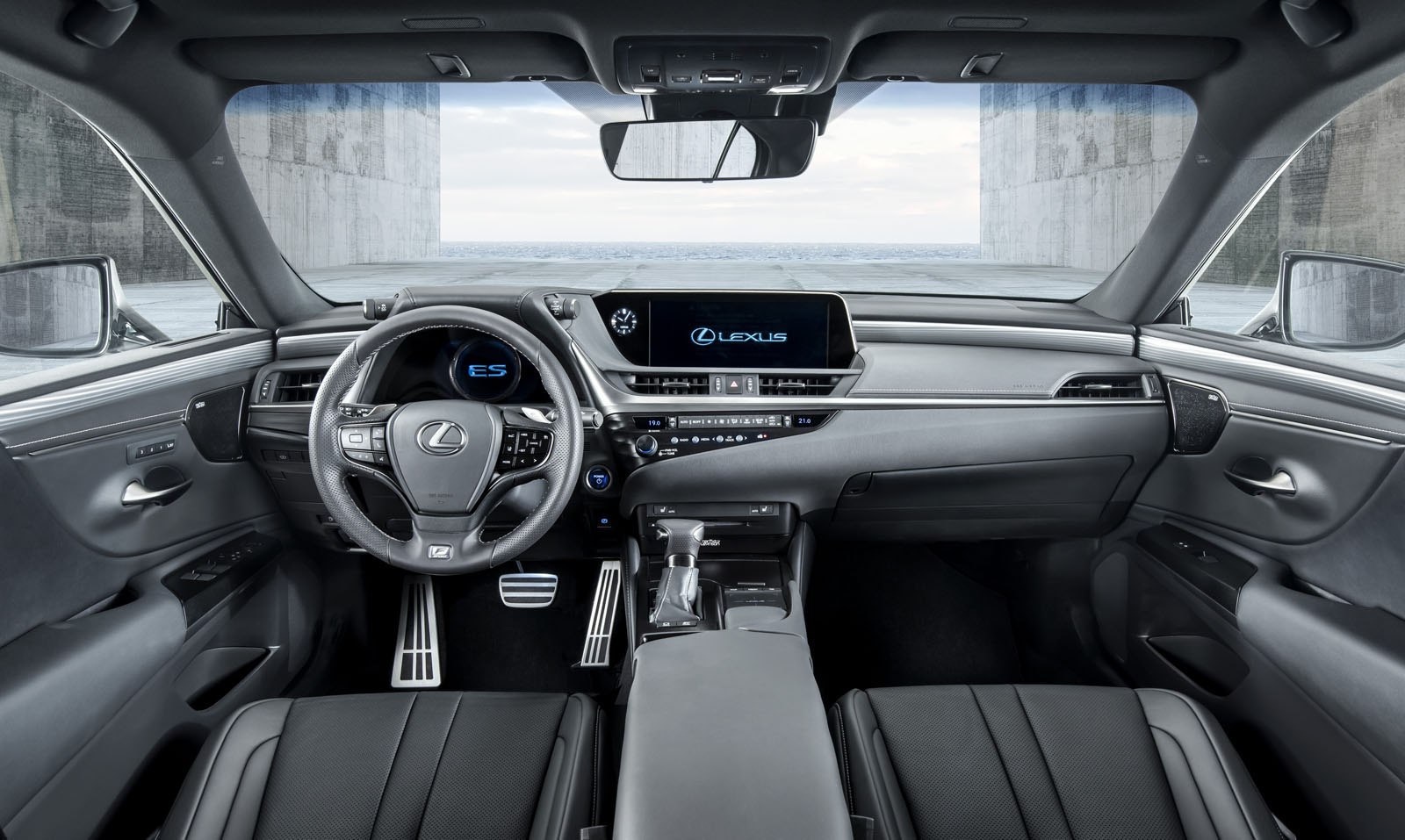 Lexus will equip the new ES with its latest safety technology. Driver assist features include a pre-collision detection system that can spot cyclists and pedestrians, as well as a two-stage high-beam system with 24 LEDs that can automatically switch beams off to avoid dazzling oncoming drivers.

Much of the car’s exterior design takes inspiration from Lexus' LS flagship, although the ES Sport model also has the LC's coupé-like features, such as 19in wheels that share a similar design. The ES’s interior has a new dashboard with a clear driver-centric focus. It comes with a 12.3in infotainment system with a transmission tunnel-located touchpad and smartphone-integrated voice-recognition technology.

The ES replaces the GS, which goes off sale this month. Only 428 GS models were sold in Britain last year, meaning it achieved just 10% of the success of Lexus’s best-selling model here, the NX SUV.

It might arrive wrapped with bold claims from PR Lexus dept. but it will be again, more of the usual crop: product adapted to Europe.Funny though that Toyota never brings out any product to Europe without the attached line "designed and engineered to appeal to drivers in this region".

Those Nice employees must be on some vapour addictions (if not expats from the usual places) because those in-front-of-your-eyes SHREK hears stalks are very bad engineering, ergonomic and design solutions for any rated european standard.

If this ES is to be significantly more driver-focused than its predecessors (last GS) then, Lexus mission got very wrong because the GS when lauched was supposed to shame the E60 5-series. Obviously it failed strongly (428 sold last year).

If the message still drums the same tune; lots of kit for few pennies, designed and engineered to appeal to drivers in this region, second to none lip-service to customers, Toyota is again targeting a thousand sales in the best year.

Drivers in this region for this class want station wagon bodies, plug-in capability, multiple configurations specs and options and to some extent, tow hitch capability or even all wheel drive.

Toyota targets an european niche (people that wish to avoid german cars and hate diesel engines), they end up confined to niche status.

There's always been an ES model in the US Lexus lineup and it's always been Camry based, I'm not really sure how this is going to improve on the sales of the GS, it'll no doubt be comfortable beautifully built and supremely reliable ut there doesn't seem to be anything special about it

There's always been an ES model in the US Lexus lineup and it's always been Camry based, I'm not really sure how this is going to improve on the sales of the GS, it'll no doubt be comfortable beautifully built and supremely reliable ut there doesn't seem to be anything special about it