BACK TO ALL NEWS
Currently reading: Vauxhall-Opel returns to profit under new PSA ownership
UP NEXT
Mystery Ferrari LaFerrari prototype spotted with new bodywork

Vauxhall-Opel has returned to profit for the first time since 1999 after being acquired from General Motors (GM) by France's PSA Group last year.

The results can be partly attributed to PSA CEO Carlos Tavares’ ambitious cost-saving plan for Vauxhall-Opel, which intends to bring the two brands to an operating margin of 2% by 2020. New models, such as the Insignia Grand Sport and Grandland X, have also boosted sales across Europe.

PSA, which already consisted of Peugeot, Citroën and DS brands, bought Vauxhall-Opel alongside GM’s European financial operation for £1.9bn in November 2017. The deal made PSA the second-biggest-selling car group in Europe after the Volkswagen Group, with a 17% share of the market.

Tavares recently told Autocar that Vauxhall-Opel would shake off its long history of loss-making and become “a true European champion” under the group. It will officially end links with GM in 2024, moving every model over to two modular PSA platforms. 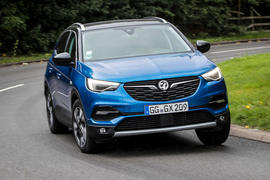 Turn round in <12 months?  Probably already making profits which is one reason why they paid £2bn for the group, GM just moved money around the accounting sheets.

Turn round in <12 months?  Probably already making profits which is one reason why they paid £2bn for the group, GM just moved money around the accounting sheets.

Exactly what I thought when reading this piece:  GM were probably levying hefty licensing / management charges, which no longer apply.  Longer term, there should be economies of scale from adopting common architectures and parts across all PSA models, but that's yet to be fully realised.  That said, it's an encouraging sign for the former GME brands.

It's all a reflection of different internal accounting, and maybe GM writing off internal loans from the group to GM Europe

What it ISN'T is a reflection of the changes made by PSA, as it's too soon for them to have had an effect.

When Opel/Vauxhall was part of GM it had to pay for the powertrain components for the Grandland & GrandDad to PSA.

Now it's part of PSA it doesn't have to pay for these components, hence it started to save money straight away.

You Brits sure do love hating Vauxhall for some reason.

"It's an accounting trick, it's O/V not paying for engines, it's pixie dust..."

No - it's yet another proof that GM mismanaged Opel for 20 years, which shouldn't be a surprise considering GM misnanages itself for the past 40.

You Brits sure do love hating Vauxhall for some reason.

"It's an accounting trick, it's O/V not paying for engines, it's pixie dust..."

No - it's yet another proof that GM mismanaged Opel for 20 years, which shouldn't be a surprise considering GM misnanages itself for the past 40.

Nah mate. It's just the usual cyber warriors trying to run with the other internet nerds who haven't a brain cell between them.

As I asked in the TESLA article,why did Ford and GM fail to develop  the Jaguar and Opel brands when they owned them.One thought is,they didn't understand the European market?

Ive never understood global platform shariong accounting; Vauxhall/Opel developed the Astra and Insignia for example, that then get sold elsewhere as Buicks, Holdens and Chevys. How can GM then say which department makes a profit or loss, are the development costs all lumped onto Opel or are they divided up into every model sold?

Presumably all these costs are now cleared as part of the sale so now easy to make a profit.

As said by others, its far to soon to be down to changes being implemented by PSA, but promising none the less, and will hopefully quieten down the Vauxhall doommongers for a while.

GMEurope developed the platforms, carried out further development and carried all the costs, then they paid GMUSA licensing for the Intellectual Property, that they themselves had developed! GME developed pretty much every successful GM car sold outside America, GMUSA having proved themselves incompetent at the task. Compare the Cruise or Malibu to the Astra or Insignia. Or earlier the Vega to the Ascona. Or the worldwide success of the T car , the Chevette/Kadett/Gemini. GM Holden in Australia based it's most successful models on Opels and so did GMKorea and all the GMs in South America.

It beggars belief that they weren't making money. GM's accounting/accountant's ineptitude will come back to bite them when they have to pay properly for the development of truly worldclass competitive cars to replace their current world small cars. A size of car that has NEVER been understood properly in the USA are cars that are well understood in Europe and can ONLY be developed properly there. Just ask Hyundai or KIA.

'You Brits sure do love hating Vauxhall for some reason.'  Not all Brits, rtwingo, but certainly a very vocal element; to them anything with a griffin on the front is automatically naff and rubbish - I suspect many of them are Ford fan-boys, as these marques have been in direct competition for years in the UK. Sure, Vauxhall have produced the odd lemon (who hasn't?), and few, if any, of their offerings have been class-leading, but I've owned 3 in my time and they've been no better, no worse, than most of the other brands I've had. I find the latest Insignia and Astra to be attractive cars, the Insignia in particular, and the road-test reviews are favourable, but still some people won't be happy until yet another proud old British name is consigned to the history books. As long as PSA continue to build cars in Britain, I for one am happy to see a Vauxhall badge on their radiators.