BACK TO ALL NEWS
Currently reading: The not-so-green truth about current car CO2 legislation
UP NEXT
Exclusive: Aston Martin seeks funds to safeguard its future

CO2 legislation in the motor industry is based on what comes out of the tailpipe, but this is an inaccurate measure of real-world carbon footprints
Open gallery
Close

What is the world’s greenest car?

You could be forgiven for thinking that would be a simple enough question to answer; that there should be a list somewhere. After all, what comes out of the tailpipe is used as a basis for legislation.

Much more important, however, and ignored by legislation, are the cradle-to-grave CO2 emissions generated during a car’s lifetime.

LPG car fuel: could the diesel crisis give it an opportunity for a comeback?

Life cycle assessment (LCA) is performed by most manufacturers, scientific bodies and engineering consultants such as Ricardo. The results can be revealing and sometimes contradict the simplistic yardstick of tailpipe emissions used today.

Ricardo breaks LCA into four main blocks: creation and distribution of fuel; vehicle production; vehicle use; and vehicle disposal. Each one of these categories generates CO2 and yet only the tailpipe emissions of the vehicle use phase are accounted for in legislation. 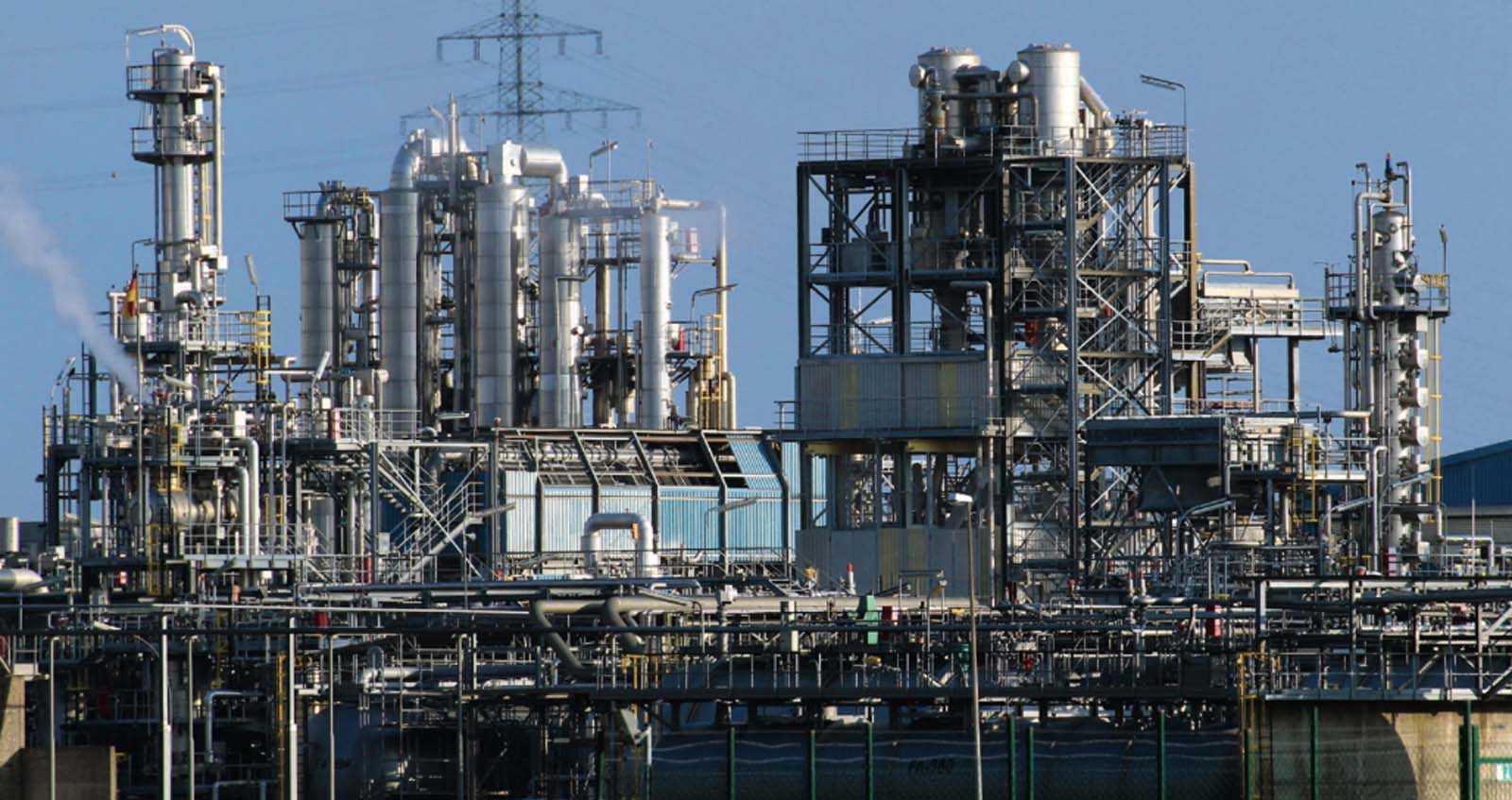 1. Creation and distribution of fuel

The first thing analysts consider is the primary energy source – where the fuel comes from. It’s obvious that petrol and diesel, derived from crude oil, create tailpipe emissions, but factor in the energy used to extract and refine them and the CO2 burden goes even higher. Biofuels still produce CO2 emissions at the tailpipe but it’s compensated for by the absorption of CO2 when the crops used to make it were growing.

Any CO2 liberated during their production and distribution should be included in establishing green credentials. The CO2 emissions from battery EVs during use depends on the sustainability of the electricity used to charge them.

The CO2 burden of any car starts even before the idea has been signed off. The design and development process – testing and movement of thousands of people, together with heat and light for offices – contribute to small amounts of embedded CO2. The production phase is the bigger villain, taking into account the supply chain, from raw materials to finished product. The choice of materials, powertrain, size, weight and the number of components all affect the car’s carbon footprint.

This is where the tailpipe emissions come in but, according to Ricardo, it can represent only 70-80% of the lifetime CO2 burden of a medium-sized petrol car, assuming a lifetime mileage of 93,000. Some 15-20% of a car’s lifetime CO2 can be accounted for by production alone. For a medium-sized battery EV, the production element is even greater, with around 52% of CO2 indirectly from the ‘tailpipe’ depending on the electricity mix used to charge the car, compared with 46% during production.

A medium-sized diesel car will emit less CO2 during use, but more during production, so the cradle-to-grave emissions of equivalent-sized petrol and diesel cars are about the same. Maintenance, including parts and consumables, will also make a small contribution.

The measurement of CO2 in Europe is based on the NEDC test, which was replaced by the more real-world-focused WLTP test in September 2017. It’s widely acknowledged that NEDC figures are optimistic compared with real-world consumption, yet they have long formed the basis for, and skewed, official European CO2 figures, with real-world testing only now beginning to be implemented.

Much as with production, the size and weight of a car, the technology and number of components in it and the materials used all affect what the CO2 impact will be at the end of the car's life. So do the logistics of dismantling it, the people involved, the recycling of material and the waste. If the car is easy to dismantle and has a large quantity of parts that can be remanufactured, then its CO2 impact will be lower. Although ‘end of life’ is mandated by an EU directive, there’s not much information available today about CO2 emissions from some aspects of it, such as processing. 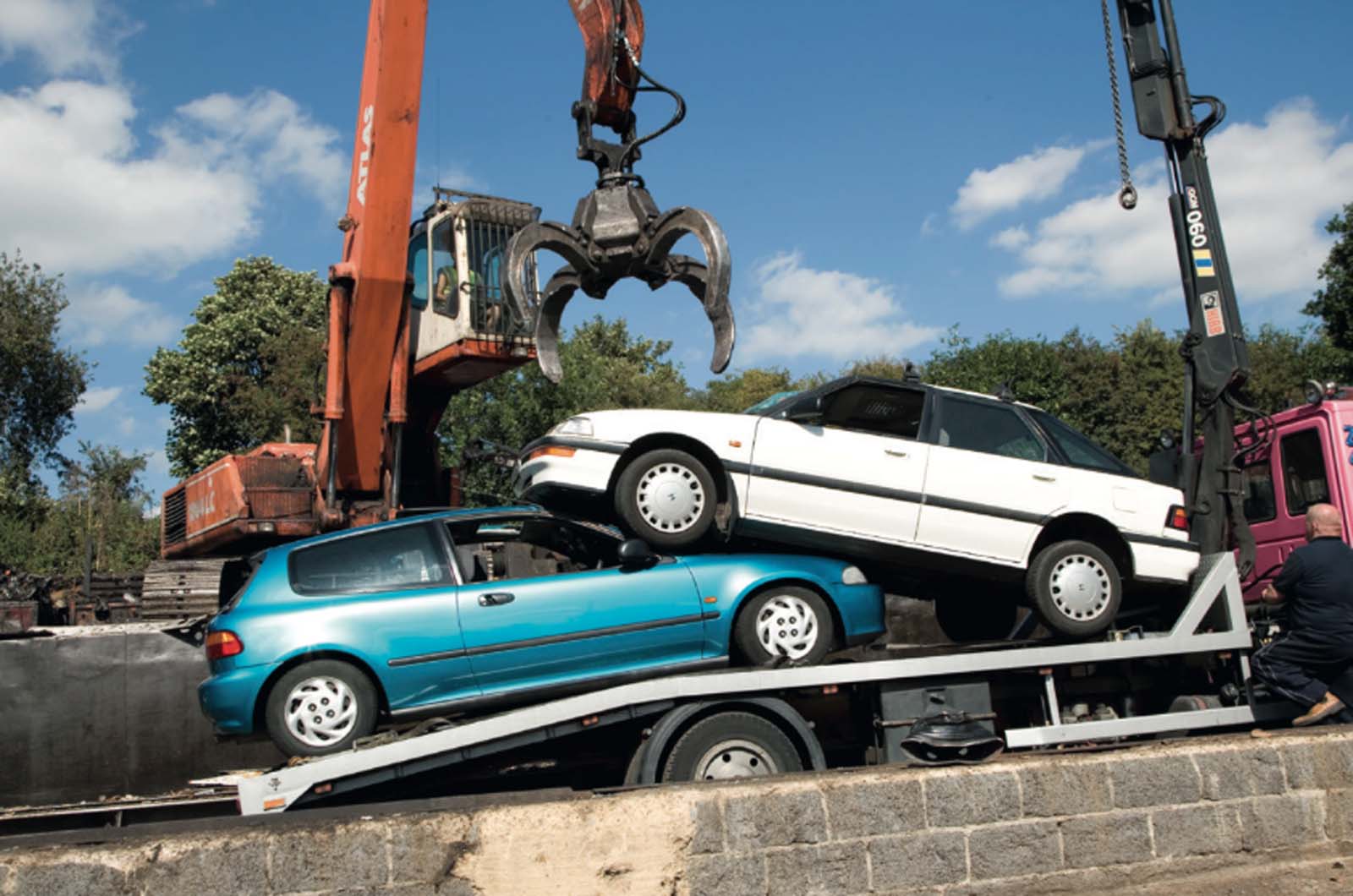 How do conventional cars and electric cars compare?

Battery-electric cars still produce less CO2 during their lifetime than petrol and diesel cars, based on 500g/kWh of CO2 emitted during electricity generation. In fact, the UK National Grid is much cleaner today at around 300g/kWh, making battery EVs even cleaner too.

Nearly half of the total life cycle CO2 of an EV results from production, though, with the battery alone accounting for more than 40% of that. For that reason, in the unlikely event an EV were to need a battery replacement during its lifetime, then its cradle-to-grave CO2 emissions would come close to that of an equivalent-sized petrol car.

The amount of CO2 produced in making an EV’s battery could fall as numbers ramp up in plants such as Tesla’s forthcoming Gigafactory. Optimised production techniques and the use of renewable energy for plants would also help. But one thing is certain: no EV can truly be described as ‘zero emission’. 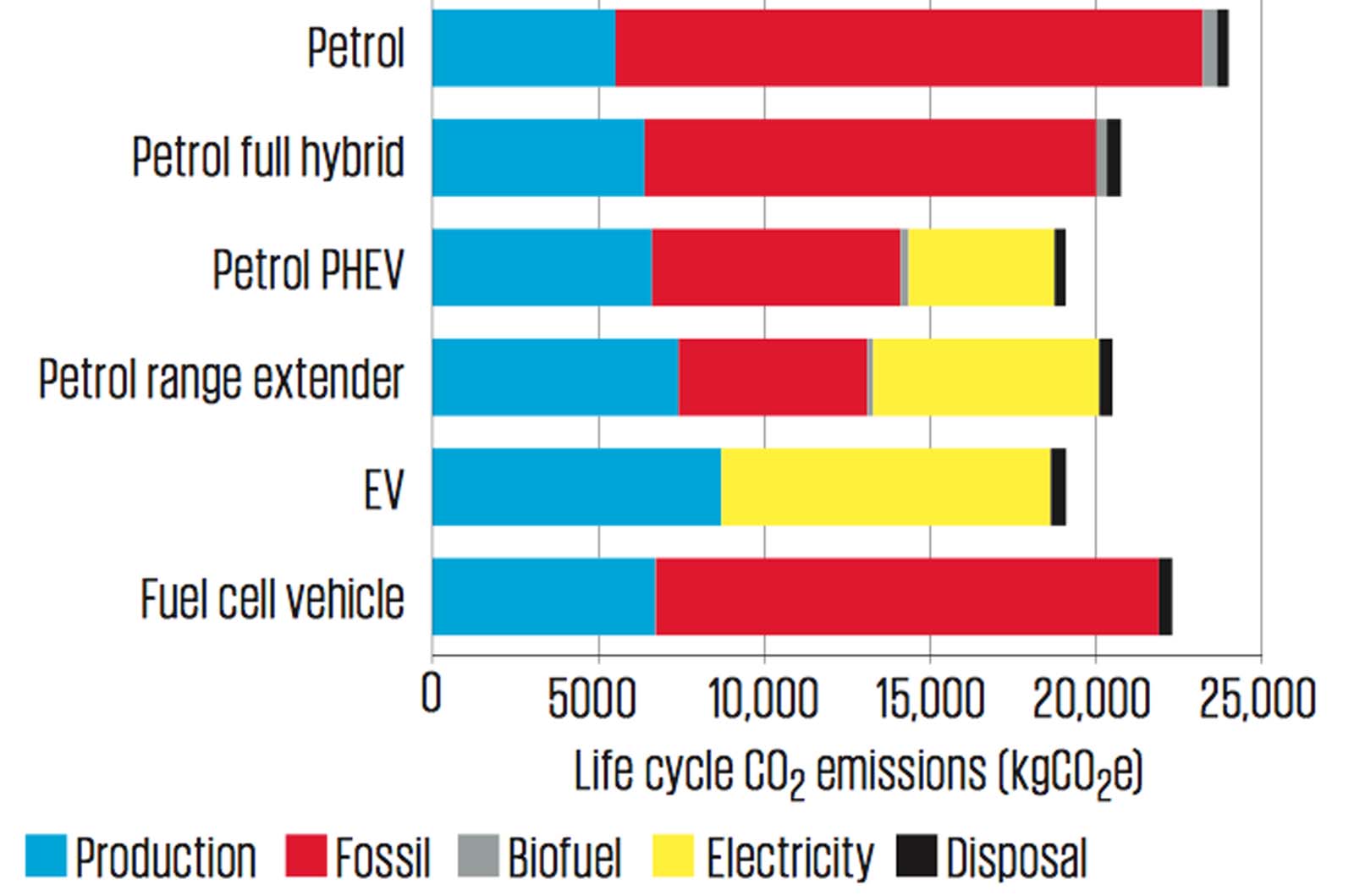 Could measuring a car's CO2 become more accurate in the future?

There are specific regulations in Europe for reducing the impact of a car during the fuel, use and disposal phases, but there are no targets in place for the crucial production phase.

There’s work to be done before LCA could form the basis of regulation and Ricardo recommends the creation of a central database with details of the carbon content of materials and processes, finding out more about the environmental impact of a car coming to the end of its life, a closer look at emissions during use and more.

Overall, there’s increasing evidence to suggest that using LCA instead of the existing system would be a more accurate way of measuring the carbon footprint of cars. More important, it could give a startling new insight into what is truly green and what is not. 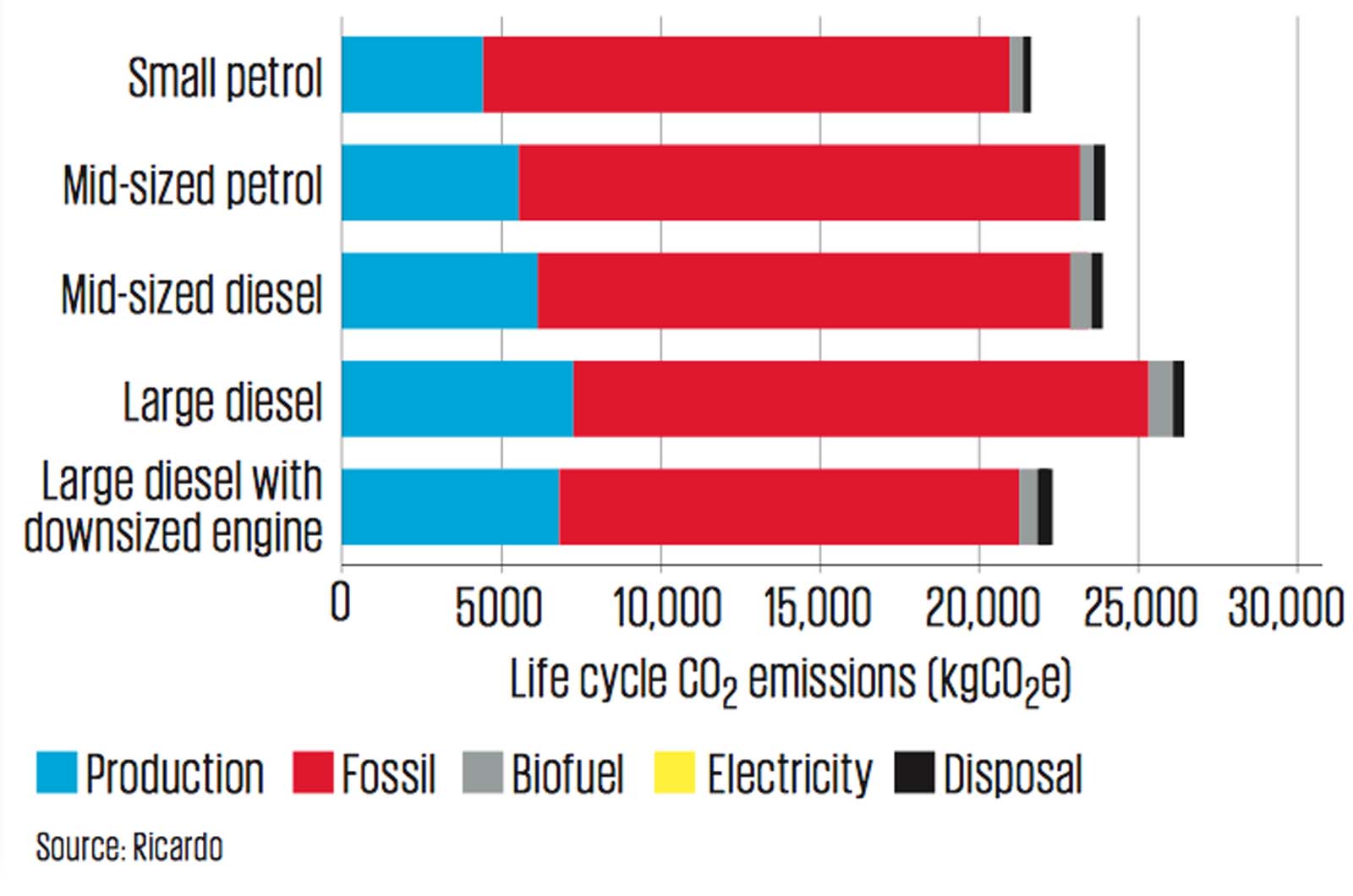 "The CO2 emissions from battery EVs during use depends on the sustainability of the electricity used to charge them."

So we can greatly improve EV CO2 production just by changing the grid supply.  Or adding solar panels to your house.  You cannot ever affect the CO2 performance of the ICE fleet this way by changing upstream supply effects.  It's embedded in the Parc whilst a  BEV is fuel agnostic at the point of generation, it's only the electricity they care about, not how it was generated.

The sooner everyone understands this, the better the future will look and we can get rid of these crazy greenwash arguments being put about by ICE supporters about sustainability of EVs when ICE powered cars are so much more demonstrably worse.   As the Ricardo repot used as the source for this article so clearly demonstrates.  Well worth a read.

based on the mileage you do, the reduced exhaust emissions of the new car, and the production emissions created by the manufacture of a new car; how long do you need to have the new car for it to have only "offset" it's creation, and not actually yet improved the environment? and then, how does that compare to the average age of cars on the roads? has anyone else noticed that when Gordon Murray was talking about this and creating iStream, everyone said he was being silly, but now it's becoming a valid point?

And all this depends on Honesty

It has taken years to get any vaguely plausible real world emissions for tail pipe emissions. It is clear that manufacturers will go to any extent to avoid the truck irrespective of the impact on the planet and human health.

Ash overall cradle to grave assessment is what is required, but the opportunities for manufacturers to cook the books for financial gain are enormous.

I think a good start would be for all involved to be open and honest. Those who served should feel the wrath of consumers, the press and the law. Immoral manufacturers should be recognised as pariahs of society.

We will never resolve such issues as global warming and pollution whilst these organisations are above the law.