BACK TO ALL NEWS
Currently reading: 'Diesel-saving' technology could make it to market in two years
UP NEXT
BMW opens door to M1-inspired electric supercar

NOx emissions from diesel engines could be all but eliminated, thanks to tech developed at Loughborough University
Open gallery
Close

A simple, affordable and apparently foolproof solution to the problem that has led to the current worldwide ‘demonisation’ of diesel engines — emissions of life-limiting NOx — has been discovered by a team of British automotive research specialists at Loughborough University.

The system, called ACCT (ammonia creation and conversion technology), has reached such a promising stage that the creators are being besieged by car manufacturers, component suppliers and even owners of large diesel fleets that have heard about the innovation and are desperate to use it to solve what they see as motoring’s most urgent problem.

The team — led by Graham Hargrave, professor of optical diagnostics, and Jonathan Wilson, research associate — has been working on exhaust missions for many years but achieved its breakthrough in the past two.

From its current state, ACCT should be fairly easy to engineer, the team believes, and could reach production within two years "with the right support”. 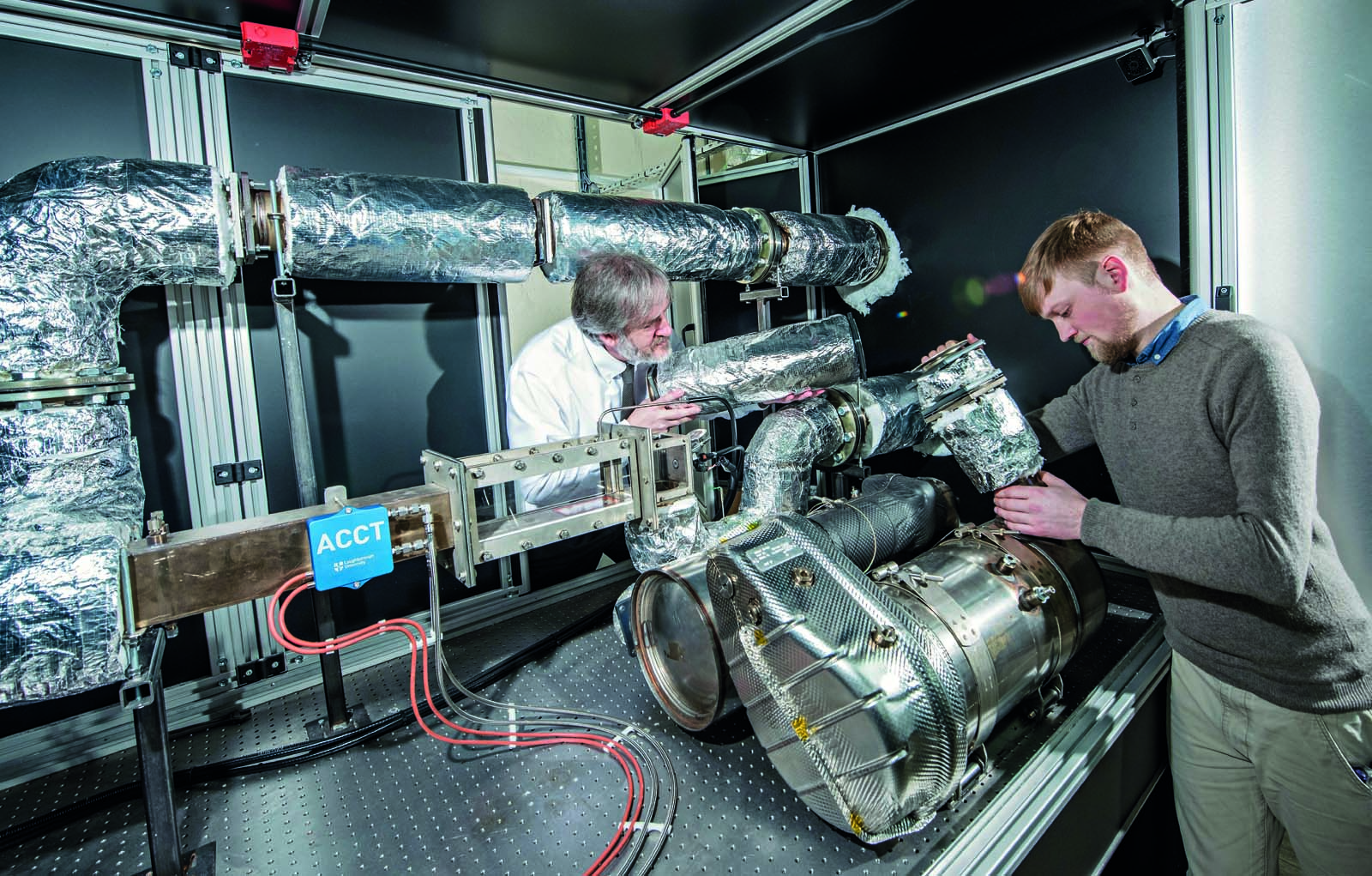 In essence, the system converts AdBlue, the universally available urea-based after-treatment, into a special ammonia-rich ‘ACCT fluid’ under accurately controlled conditions in an exhaust-mounted chamber.

Preliminary tests on a city-based stop-start Skoda taxi indicate that ACCT can capture 98% of exhaust-borne NOx, compared with 60% for the same car running a conventional EU6 system — even before researchers had a chance to ‘tune’ the ACCT system for the best performance.

Experts with knowledge of the development are starting to talk in terms of “virtually zero-emission” diesel engines and citing ACCT as being even more important than the arrival of the common-rail diesel.

In the past decade, NOx has become an infamous problem. It springs from the fact that diesels become more efficient as they run hotter, but this heat increases their NOx output. The effect has led to rapidly rising awareness of NOx’s detrimental effect on health; current European research suggests it shortens 71,000 lives a year.

Since 2014, the practice of injecting diesel exhausts with AdBlue via SCR exhaust catalysts has proved effective in most situations and has dramatically lowered average NOx outputs. But, as the Loughborough researchers point out, gaps in SCR’s effectiveness remain – notably when low exhaust temperatures prevent complete decomposition of AdBlue, such as when a vehicle is idling in traffic, especially in stop-start conditions. NOx outputs rise when SCR doesn’t function well, and that's the root of recent reports that even new-car exhausts sometimes produce multiples of permitted NOx levels.

As Hargrave explained, there’s a deep irony in this. While NOx has hit the headlines, CO2 continues to kill the planet. “NOx is serious,” he said, “but it’s really a point-source problem. It only matters in a tiny minority of locations.

"Solve it and you can get on with reducing CO2, which is important everywhere.”

Because of concerns over NOx, Europe’s diesel market is in near chaos. Sales of oil-burning cars have collapsed by 20%, putting pressure on margins and infrastructure. A swing to more CO2-heavy petrol vehicles means CO2 targets are being missed — at the very moment these targets are about to tighten.

For light commercial vehicles, there’s no realistic prospect of reducing diesel use in the short term. Market experts don’t believe buyers will entertain a rapid change to downsized petrol engines or hybrids. For heavy goods vehicles, the situation is much worse.

Whereas car engines are ‘dialled back’ on NOx and need only light doses of AdBlue, trucks need much more.

In cold-exhaust conditions (winter, for example), the incomplete breakdown of AdBlue leaves damaging and almost immovable exhaust deposits in complex exhaust systems that reduce power and even immobilise trucks completely. Understandably, the market in defeat devices for HGVs is lively.

The Loughborough team says it now needs a heavyweight technology partner to take ACCT to production but is wary of ceding valuable intellectual property rights cheaply.

Negotiations between the university’s IP specialists and prospective partners are in full swing. “Our sense is that we need a major supplier rather than a single manufacturer,” said Hargrave.

Whatever ACCT’s route to market, an increasing number of potential users are desperate to see its progress. It could lead to a whole new lease of life for diesels.

If ACCT changes diesels, as seems likely, it will be because Wilson decided to do a PhD at Loughborough University. Hargrave, his professor, explains: “We’ve known for ages there was an NOx problem with AdBlue and low temperatures. Jonathan had an idea that could solve it but needed the opportunity to develop it, so we went to the university and organised an internal scholarship. He’d worked on a similar topic through his undergraduate years.

"That work made it clear that if anyone was going to solve this problem, it’d be Jonathan. So we said here’s the lab and the money. Just go and make it work. And he did…”

Combine with HVO and preheating for even better economy

12 million diesel drivers can benefit from this research and exisiting solutions like HVO made from waste not food. Huge gains in mpg and lower NOx and other emissions. See Neste in Finland. Pre heat this thermodynamically efficient engine with renewable electricity for warm start up, lower emissions cf  cold temp running  and longer component life. See DEFA Sweden.

The Lupo 3L and Audi A2 1,2 showed the energy saving potential but diesel's advantages were squandered by our #supersizemeSUVconsumercultre. EVs and PHEVs are just repeating error.

Just wondering how much this new system is going to add to the cost of each car? How reliable is it going to be? How much ad blue will it use? Will it be cost affective?
Cobnapint 24 March 2018

I'm sure all the different companies

Queuing at the door will be taking this into account when they bid for the right to develop/buy/use this system.

But without hope nothing would ever get developed!

All other options involve cost, envirnonmental impact and wasteful scrapping of reliable machines.

But without hope nothing would ever get developed!

All other options involve cost, envirnonmental impact and wasteful scrapping of reliable machines.

All turbo combustion engines are getting too complicated.

Honestly it's just another complication to a system that is already too bloody complex. Modern engines with turbos and the layers and layers of electronics are becoming nightmares to maintain and fix. The fall in value when they are outside of warranty is precipitous, especially for anything more complex than a 4 cylinder.

Diesels are horrible. They sound shyte and they emit loads of soot. Particulate filters are so expensive people just disable them when it comes time to replace. The only thing they had was turbo torque and cheap fuel. Would rather have a petrol turbo engine any day.

Given the reliability issues of anything turbo charged (which are all heat related), would rather go for an electric car for my next car. Way simpler, far less moving parts, has the torque of a turbo engine, can fill it at home in my garage, beats conventional engine cars hands down on refinement, potentially upgradable with better batteries, excellent traction in snow and wet. They are just better drivetrains.

Turbos and heat soak issues were solved a long long time ago.