BACK TO ALL NEWS
Currently reading: New tax rules herald EV sales boom
UP NEXT
Tesla to expand select UK Superchargers to other electric vehicles

The electric car revolution is poised to hit the UK this year, but not because of purchase grants, green-shaming or European Union regulations. Instead, the expected sales boom is set to be driven largely by a change to company car tax regulations.

After next week's upcoming changes were announced in July 2019, sales of EVs doubled in the second half of the year compared with the first half, according to figures from the Society of Motor Manufacturers and Traders (SMMT). Business lease firm Alphabet reported a 165% rise in orders for plug-in vehicles.

The UK’s company car market is big business. Up to the end of November last year, 53% of cars sold went to fleets, SMMT figures show. Company cars aren’t free; they're a heavily taxed perk and the government has since 2002 pegged the rate of duty to the car’s official CO2 emission figure. That move forced drivers out of thirsty petrol-engined cars and into more frugal diesels as companies sought to reduce the tax burden on their employees.

This year, however, the focus switches to plug-in cars. From 6 April 2020, people who choose electric cars will pay 0% company car tax: nothing at all.

“The fleet sector has a lot of pent-up demand, and this tax incentive could lead to a big surge in EVs,” said Gerry Keaney, chief executive of the British Vehicle Rental and Leasing Association (BVRLA).

Simultaneously, company car tax will, for the first time, be calculated using the CO2 figures generated by the new, tougher Worldwide Harmonised Light Vehicle Test (WLTP) regime. In short, the government is offering a huge, juicy carrot for drivers choosing electric and plug-in hybrid cars and an extra whack of the stick for staying with conventional diesels or petrols.

How all this is worked out will already be familiar to company car drivers. The tax, known as benefit-in-kind (BIK), is expressed as a percentage of the car’s list price. For example, a Vauxhall Astra 1.2 turbo petrol with CO2 measured at 99g/km currently falls into the 23% tax band. That figure is further modified by the employee’s salary tax band, so those who earn more pay more.

To give an idea of how generous the new tax rates are, the driver of a Nissan Leaf electric car previously would have payed between £871 and £1960 in company car tax, depending on their salary. From 6 April, the Leaf falls into a 0% tax band, meaning they’ll pay nothing. That generosity from the government lasts only a year, but the following tax year the Leaf bill rises to just £54-£122, then £109-£245 the year after that (company car taxes rise annually with the same inevitability as rail fares). 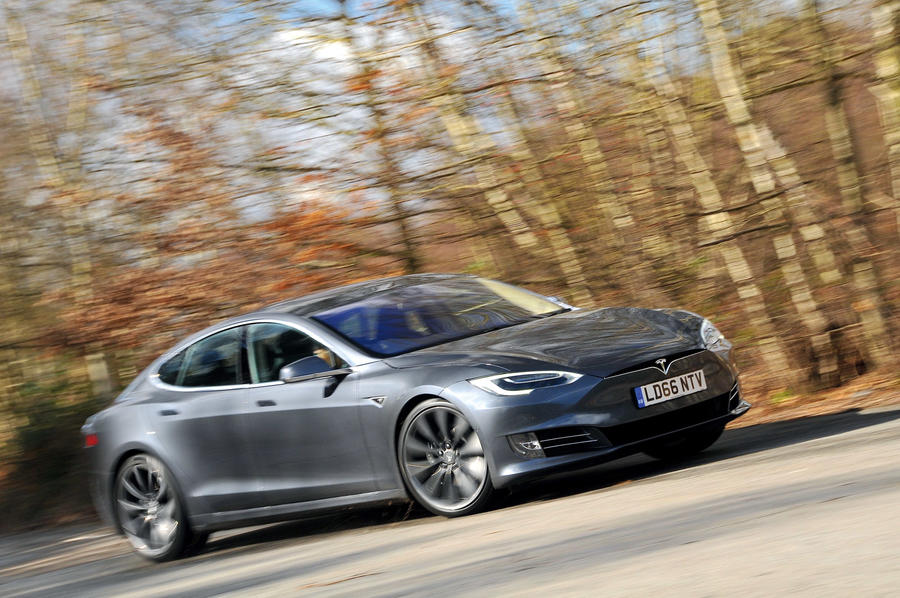 It’s even more striking when you compare the figures for EVs against combustion-engined cars. While a Tesla Model S costing £97,700 attracts a 0% company car tax from 6 April, a slightly cheaper Mercedes-Benz S450L AMG Line costs the driver a whopping £13,116 for the year.

Preparations have been under way for some time. Hyundai, for example, earlier this year, revised its EV range and was making sure cars are available. EVs such as the Kona Electric have been in short supply, but that was expected to have changed by now.

“We expect there to be a surge for our fully electric vehicles and we will be seeing greater availability of those models this year and beyond,” said Ashley Andrew, managing director of Hyundai Motor UK in February. However, the coronavirus pandemic is likely to have a significant impact on vehicle supply.

Businesses are also revising their electric vehicle policies, some radically. Consulting and IT firm Atos, for example, now offers electric cars only to any new employee signing up to its company fleet scheme.

Charge point firm Pod Point, meanwhile, has reported “record” demand for installations at businesses over the past six months. “With the BIK change, we expect to see a massive increase in company car drivers going electric. It’s going to turn the industry on its head,” Pod Point CEO Erik Fairbairn said.

It won’t all go smoothly. The BVRLA’s Keaney points out that a surge in demand can only come if there are enough EVs available on the market. One Atos employee, who wanted to remain anonymous, grumbled that delivery times for new electric cars were so long that the policy had in effect imposed a ban on company cars.

Some companies, however, don’t offer their employees the option of an electric car. Sometimes this is because they have a deal with just one manufacturer, which might not yet sell an EV. For example, Serco and Capita, both service companies, only use Ford, which won’t have an EV available until the pricey Mustang Mach-E arrives late in the year.

Sticking with combustion-engined cars, however, is set to get more costly. Switching to the WLTP method of calculating CO2 for tax bands means that an Astra 1.2 jumps from its 99g/km emission figure to 119g/km. After some pressure, the government adjusted the bands to account for the WLTP jump, but our sample Astra still goes from a 23% band to 26%, costing drivers more.

“The reduction in rates for two years is unlikely to compensate drivers fully for the increase in emissions,” said Caroline Sandall, chairman of fleet industry pressure group ACFO. She also pointed out that because of December’s general election, the changes haven’t yet been made law.

The changes also benefit plug-in hybrids, fleet sales of which have exploded since the July announcement. SMMT figures show that in the second half of last year, three out of four of new PHEVs sold went to fleets. The new tax rules benefit longer-range plug-in hybrids. For example, the new BMW X5 xDrive45e, with an electric range of 54 miles, will fall into the 6% tax band from the 6th of April, rather than the 12% band it would have been in if BMW had stuck with the previous version’s 20-mile range.

Of course, what the government gives it can also take away. After April 2023, it will have the power to create new tax bands. By that time, however, the temptation of cheaper motoring will have persuaded thousands of company car drivers into switching to plug-ins.

Renault confirms Twingo ZE to be launched later this year

The difference between a LEAF and a equivalent Diesel Focus with Auto box capable of hitting 60 in 8.5 is not that great now and fuel savings alone more than make up the difference. Want cheaper go with a Zoe

Shortage of power points and electricity rants is just sour grapes from luddites, Norway has no problem with charging points and 50% of their new cars have a plug attached.  Running a BEV aisn't  a problen for 50%+ of population NOW, and with tech improving another 30%+ will be covered in 5 years time. ICE cars will be around for some time so why all the anti BEV rants?

Effect of tax changes on EV uptake is overstated by Autocar

The reality is that EV sales are increasing anyway, because people are starting to realise that EVs are great fun to drive and much cheaper to run.The biggest brake on their uptake will be traditional manufacturers and the traditional motoring press dragging their feet. As usual, incumbent dinosaurs stand in the way of progress.Get a copy of the old doc 'Who killed the electric car?' for a case in point.

Or research how Chevron bought the patent to NiMH batteries and sued Panasonic to stop them supplying batteries large enough to power EVs in the 1990s, delaying the progress of EVs by 10 years.

I get the reasoning why they

I get the reasoning why they are doing this, to help get more in to zero emission at point of use vehicles. However, I don't see it making massive differences. Yes, quite a few more will be sold, but for the majority of company car drivers,they won't have a PHEV or EV on their company car lists. Mostly down to the extra costs to buying one over a standard car.

I would happily have a PHEV, but I need an estate car. We only go with VW*, which means it would be the GTE spec, at almost £37000 vs a decent spec diesel version for 10k less.

*Corolla hybrid is now on the list, which is what I be going for next