BACK TO ALL NEWS
Currently reading: New Renault Megane facelift: plug-in hybrid variant spotted
UP NEXT
Skoda to launch electric saloons and estates alongside SUVs

Renault will launch a petrol-electric Megane as part of an extensive facelift of the Ford Focus rival, expected to be revealed in September
Open gallery
Close
Share story

Renault will unveil an updated Megane later this year, with a plug-in hybrid variant, due as part of the firm's rapid electrification expansion, spotted for the first time.

The Ford Focus rival first went on sale in 2016, but the competition has moved on since then. A new Ford Focus has since arrived, with the next-generation Volkswagen Golf and Seat Leon due next year. Renault  updated the  Kadjar SUV late last year, recently revealed a tweaked Koleos, and will launch an all-new Clio and Captur later this year.

Like the mechanically-related Kadjar, expect a subtle design evolution for the updated Megane. The front end bears the most disguise, suggesting alterations to the grille, headlights and bumper. At the rear, a reshaped tailgate and LED lighting profile will help to foster the familiar resemblance with the 2019 Clio.

Something else shared with the Clio, and a first for the Megane in any guise, will be a new hybridised variant. Launching in 2020, it will form a crucial part of the Renault-Nissan-Mitsubishi alliance’s Drive the Future plan, which is targeting 20 electrified Renaults to hit the market by 2022. 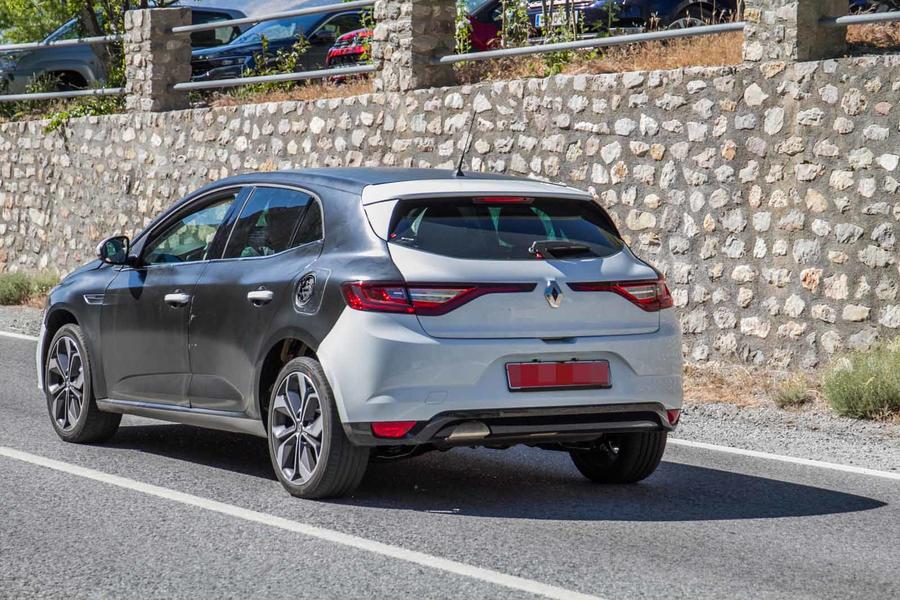 Instead of using the Clio's cheaper, simpler conventional hybrid system, the Megan will make use of a more advanced plug-in powertrain. It will use a turbocharged petrol engine with a new electric motor system, expected to be mated to an innovative clutchless transmission rather than the more typical CVT.

It will be similar to the system launched on the next Captur SUV, and should allow an all-electric range of around 30 miles. We can see that this prototype features a charging plug on the left-hand side of the car, complimenting the fuel filler on the right-hand side.

The hybrid will sit alongside a familiar range of petrol and diesel engines, including the new 1.0 and 1.3-litre turbocharged units found in everything from the new Clio to (in 1.3-litre form) the Mercedes A-Class. A range of diesels will also feature.

Alongside the powertrain additions, expect a slicker interior with higher-grade materials, improved infotainment and new digital dials, alongside an improved suite of driver assist features. Expect to see the new Megane at September’s Frankfurt motor show before it arrives at dealerships in early 2020.

All-new Renault Clio is firm's most advanced supermini yet

STUPID i meant to say and YOU

STUPID i meant to say and YOU instead of your - thats what you get for being shocked at stupid comments and dire spelling - Oops - I will take my pill and try to forget the idiotic comments.

wow we are seeing the results

wow we are seeing the results of the merger between renault and hyundai filling up their fruitbowl very quickly, new megan and i10 developed on the shame shassy and testing on the same road as you can see in the i10 article

looking forward to the i10 nurburgering time should be a peach

wow we are seeing the results of the merger between renault and hyundai filling up their fruitbowl very quickly, new megan and i10 developed on the shame shassy and testing on the same road as you can see in the i10 article

looking forward to the i10 nurburgering time should be a peach

. If you haven’t got the decency to say what you mean, resorting to this doesn’t show you in a good light....whoever you are....

Any Chance you could take the

Any Chance you could take the time to read a dictionary - and learn to spell, because using a name to deride others, and the way your write, shows how stipid you are making yourself look.