BACK TO ALL NEWS
Currently reading: The exciting future of the M-Sport rally team
UP NEXT
Land Rover Defender 130 to make debut on 31 May

The exciting future of the M-Sport rally team

Wilson's M-Sport is already a global success, but it's nothing vision, graft and £19m can't make even better
Open gallery
Close

Malcolm Wilson, rally star turned businessman, stands on a little hill in his native Cumbria and looks out across the vast new quarry site that now abuts the imposing HQ he opened for his rally car team, M-Sport, nearly 20 years ago. Soon this will be a test track.

Into this place, over the next year or so, Wilson will pour a cool £19 million – partly grant funding but mostly his own money – to establish a huge new factory that will more than double the size of his already generous workshop space, plus a 1.5-mile evaluation circuit to test the cars he will build there. Like everyone who sees it, Wilson has a little trouble taking in the size of the project he has started.

“I can’t quite believe this,” he says, with genuine wonder in his voice. “We’ve been trying to launch this project for five years, and while it was a grass field, it seemed okay. It seemed doable. But now I see we’re creating something amazing. The main straight alone will be 800 metres long, and the new factory – over there – will cover 112,000 square feet. That’s very big.”

The master plan, Wilson explains, is to equip M-Sport with what amounts to a competition car manufacturing plant that can run on shifts and employ the regular rules and procedures that any lowvolume car manufacturing business needs – quite different from the huge flexibility needed for the nearby rally car preparation and repair business that’s also M-Sport’s bread and butter. “We ran nine cars in the Finnish rally that’s just finished,” Wilson explains, “and four of them crashed. We’ve got to get those ready for Germany, and it’s only a week away, so the guys will work 14-hour days to get it done. That’s very different from a machinist working regular hours in a factory and sometimes the two things don’t mix.”

With 572bhp, a top speed of 170mph, the GT3-R is a glorious tribute to Bentley's return to racing

The driver of M-Sport’s need for expansion is the success of the Ford Fiesta R5, a four-wheel-drive rally car that, to the naked eye, looks every bit as serious as a World Rally Championship car but is a little slower and quite a lot cheaper to run and repair. It’s part of a very successful global formula, and M-Sport’s win record has created a demand for a new £180,000 R5 every week. It has been doing them for three years and will soon build car number 180.

On top of that, the company maintains its team of WRC Fiestas (new regs for 2017 mean a new car is under development), there’s a deal with Ford US to engineer and build rallycross cars for the team run by international driving megastar Ken Block, and M-Sport produces a steady stream of ‘starter’ front-wheel-drive Fiesta R1s and R2s that provide a staircase for tomorrow’s rally stars.

There’s more. As the result of a deal signed in 2012, M-Sport engineers and runs Bentley’s successful Continental GT3 racing cars around the world. And to top things off, M-Sport now brands a range of dressed-up Ford commercials – Transit Custom, Transit Connect and Ranger – which are showing plenty of sales potential. The M-Sport Custom alone, built in Abergavenny by Van Sport, has sold 600 copies in the past year. The M-Sport Ranger, which draws eyes in any crowd and which today we’re lucky enough to drive, will be on stream next month at prices north of £30,000. 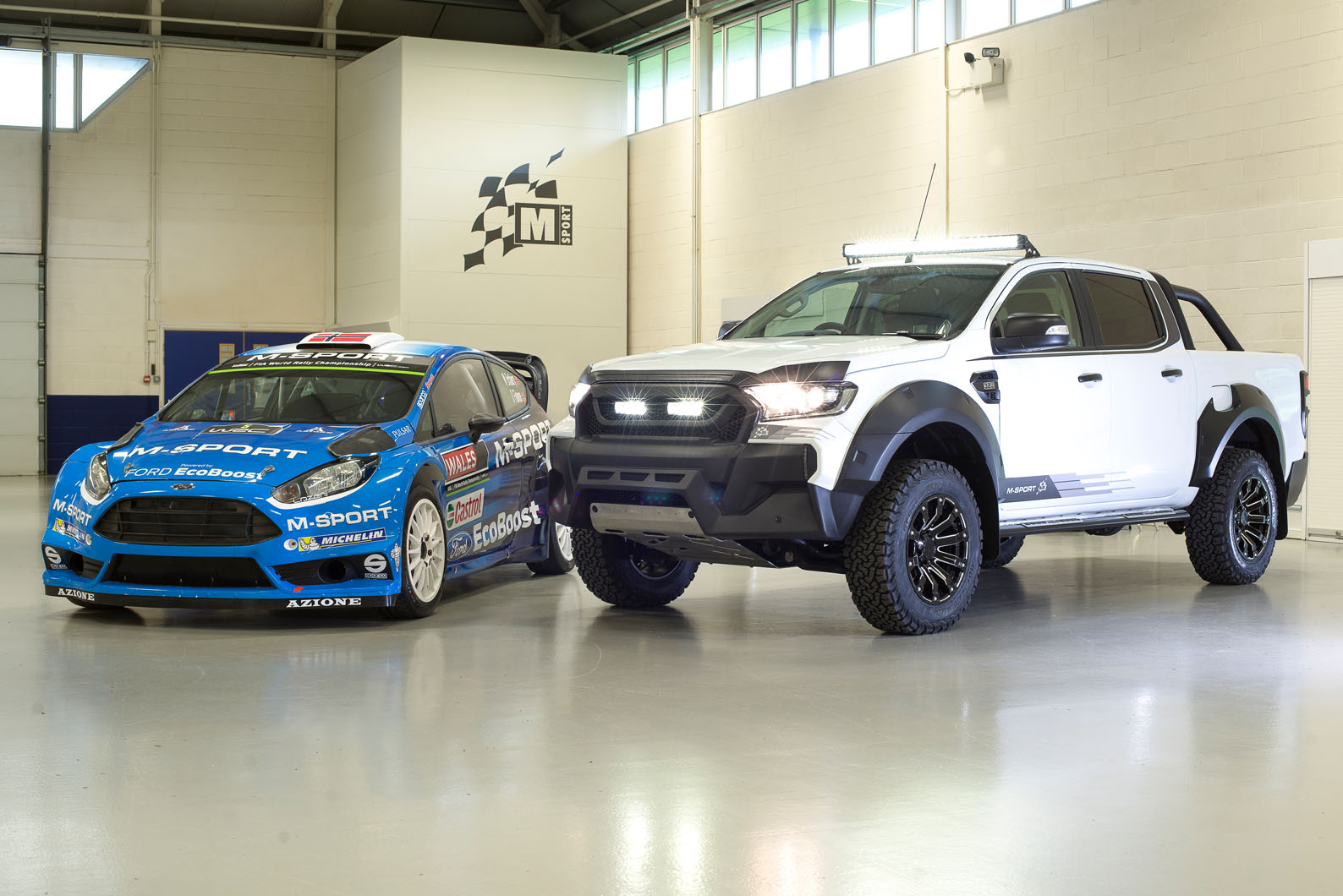 All this growth of volume and complexity throws light on the need for the new test track, cutely labelled ‘evaluation centre’ to acknowledge local planners’ stipulation that it should never be used for competition. Until now, M-Sport has been hiring an airfield 20 minutes away for car testing, with all the inconvenience and cost that implies. But Wilson also sees the client appeal.

“We think it’ll open a new door,” says Wilson. “Now, if a customer wants to come and test his new car in a controlled environment, we can invite him in and look after him while he’s here. Maybe we can also invite other car companies in, perhaps to test prototypes.

“What’s more, the new workshops will give us scope for manufacturing on a scale we haven’t had before. I’m a great believer in having the best technical equipment, because clients can see us as a kind of one-stop shop for test and engineering facilities. That’s part of the plan, anyway.”

Wilson believes M-Sport could even establish a small production line for low-volume vehicles – perhaps 200 a year. At present, he’s thinking about modified versions of existing cars (an M-Sport road-going Bentley drawing on the race car’s styling would be an interesting possibility) but, for the moment, he’s not being so prescriptive.

For good measure, M-Sport is also in the throes of building a smaller outpost in Krakow, Poland, following a realisation (on a tourist trip to the former concentration camp at Auschwitz) that Krakow was ideally placed to draw customers from all over Europe to an engineering centre. It began as a base to build 20 ‘junior’ Fiestas for rallying in just 12 weeks, but soon it’ll be twothirds the size of M-Sport’s current base in Cockermouth, Cumbria, the home town that Wilson has always refused to leave.

Most of this expansion has come in the four years since M-Sport unexpectedly lost a long-standing contract to design and build WRC cars for Ford and run its team. Since it was the Ford deal that brought M-Sport to global prominence in the first place, many presumed its ending would scupper the business.

“It was definitely the worst phone conversation I’ve had in business,” Wilson recalls. “We’d just had our best Rally GB result ever. I think we’d filled six of the first eight places. So when Ford’s chairman, Steve Odell, rang the next day, I thought he was ringing to say well done. But he was ringing to end the programme, and not in a year’s time, as the contract specified, but straight away.

“In fairness, Ford had their own big problems at the time. Their press release linked the end of our contract with the closure of their plant in Genk, Belgium, which was big stuff. But it was still a huge shock.”

Luckily, the Ford ‘starter’ cars were going gangbusters and have continued that way. A new sponsorship link with Qatar allowed the WRC programme to continue.

Then into the fray, just few weeks after the Ford deal collapsed, walked Bentley’s competitions director, Brian Gush, with a plan to involve M-Sport in a new Bentley GT3 racing programme. The deal was done very quickly, and on a handshake, before the protagonists had even discussed schedules or budgets, but it has worked very well. The Bentleys have been fast and reliable from the beginning, if not always lucky. 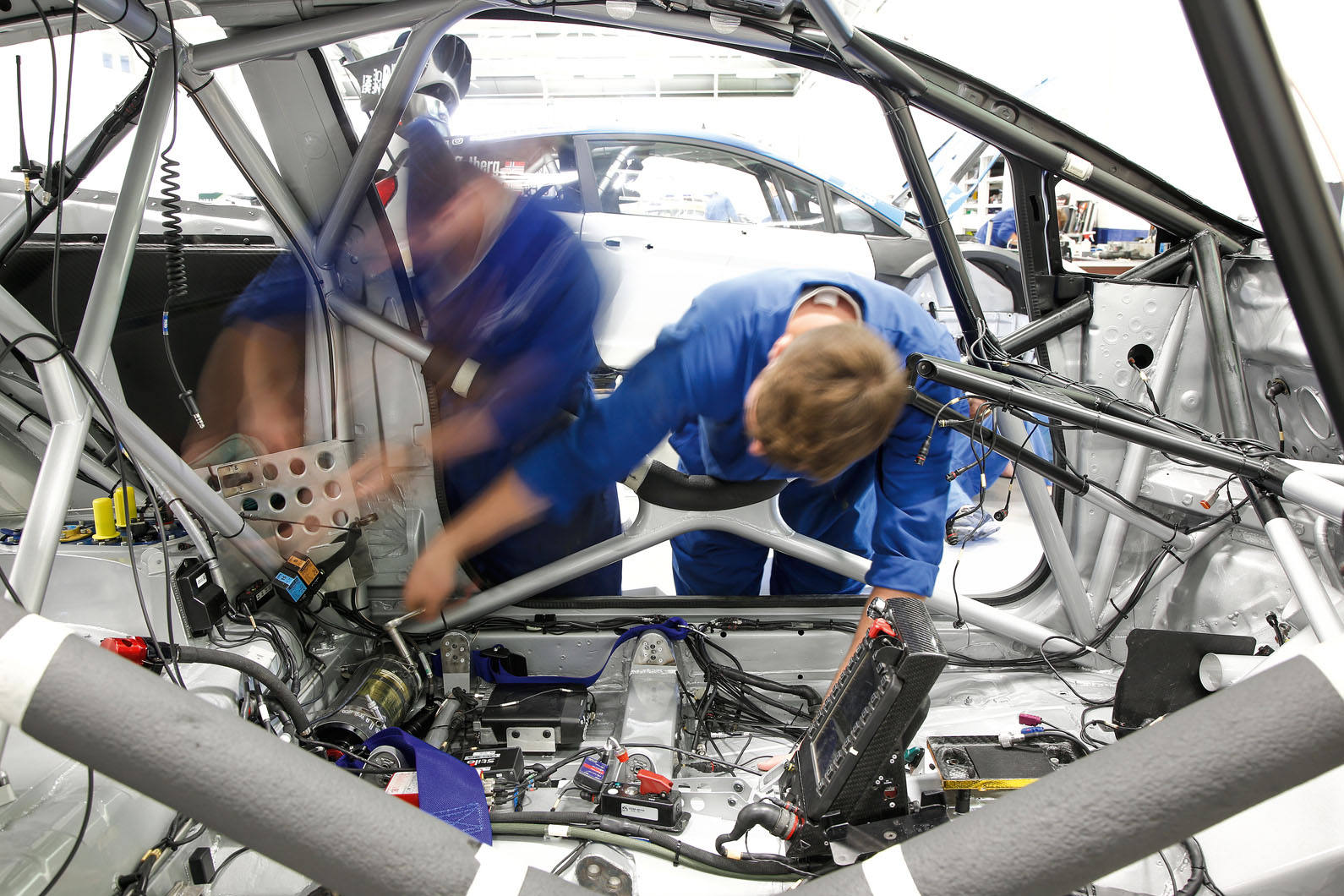 The upshot is that M-Sport is bigger than ever – at 230 employees, the region’s second-biggest local employer – and by the time the new factory is percolating, beyond 2020, there will be another 100 people on the payroll.

In short, M-Sport will soon be the envy of every OEM (original equipment manufacturer) in the country. M-Sport is bound to go on building winning competition cars, but it could also become an important engineering outpost for much bigger car companies, or even a base for low-volume car production.

Nothing is certain, Wilson believes. Even when things look bad, you must stay open to unforeseen opportunities; the Ford and Bentley deals have taught him that. But you can always improve your chances of success by effort. Work hard, grab opportunities when they arise, chase quality and do the right thing by your workforce and success comes closer.

I wonder what these guys

I wonder what these guys could do if they got their hands on a bmw?