BACK TO ALL NEWS
Currently reading: Analysis: do hydrogen-powered cars have a future?
UP NEXT
Ford backs call for European ban on new ICE cars from 2035

Can car makers tap the potential of hydrogen or will battery-electric reign supreme? We investigate
Open gallery
Close

The drumbeat of enthusiasm for hydrogen as a road fuel has grown steadily louder this year, despite a general industry-wide acceptance that EVs will become the mainstream in most cases.

This culminated in Toyota’s huge investment in the recently revealed Mk2 Mirai. A substantial overhaul has transformed an oddity built in small numbers into a stridently confident saloon that will raise Toyota’s global ambitions for hydrogen next year.

The new Mirai will join the Hyundai Nexo SUV on the admittedly short list of commercially available cars powered by zero-emissions fuel cells, but others are in the pipeline. Mercedes could yet import its GLC F-Cell SUV to the UK and Toyota’s fuel-cell partner, BMW, will roll out a hydrogen X5 in 2022. The PSA Group has said it will launch a fuel-cell van by 2021 that’s likely to include a Vauxhall version.

In the UK, meanwhile, Wrightbus, the Northern Irish bus firm responsible for building London’s hybrid ‘Boris bus’, was rescued from bankruptcy earlier in October by a company aiming to switch the UK’s bus fleet to hydrogen. 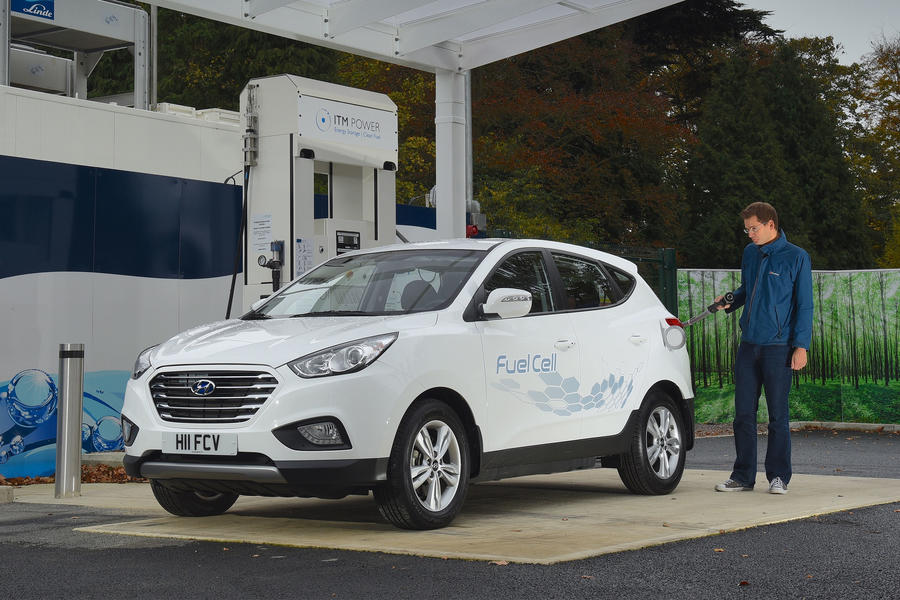 Jaguar Land Rover (JLR) has said the fuel might be more suitable than battery-electric power for its largest SUVs as it works to cut emissions, and is reportedly working on a hydrogen-powered Range Rover with an aim to launch by the end of the decade. “If you’re not careful, you end up with such big batteries [with EVs], you make it so heavy that when you race down the autobahn, the range disappears. So other technologies could come into play, potentially hydrogen,” said Nick Rogers, JLR’s head of engineering.

It’s easy to see the appeal. Hydrogen fuel-cell vehicles emit nothing but water vapour, have a long range (414 miles for the Nexo) and can be filled almost as quickly as a petrol or diesel car. As the scale of the challenge to persuade us out of user-friendly combustionengined cars into EVs becomes clear, might fast-fill hydrogen be a better zero-emissions bet?

Not so fast, warns Carlos Tavares, CEO of the PSA Group. “Now people see EVs are going to be difficult, they are going to say: ‘Oh, what about hydrogen?’ You’re going to see lots of headlines about hydrogen and everyone’s going to have a hydrogen project,” he said at the Frankfurt motor show in September. Despite Tavares’ reluctance to be dictated to by headlines, the PSA Group has its own hydrogen project (the 2021 van), but Tavares warned that it would be “very expensive”. 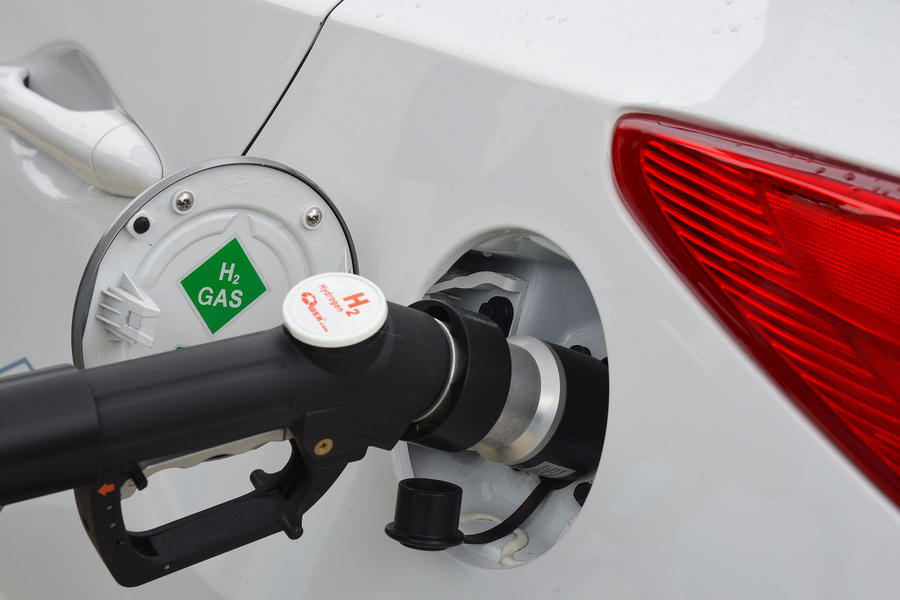 Cost has always been a drag on fuel cells, which currently use around 30g-60g of the precious metal platinum on every stack. BMW has said a fuel-cell powertrain is currently still around 10 times more expensive than an equivalent electric one.

Other hurdles remain. It might be zero emissions at the tailpipe, but splitting water into hydrogen – the most common method of creating it – demands a lot of electricity. “It only makes sense if you’re creating hydrogen with renewable energy,” said Rogers. His predecessor, Wolfgang Ziebart, called fuel cells “complete nonsense” back in 2016 because of their poor ‘wheel-to-well’ carbon emissions.

The refuelling infrastructure is in desperate need of expansion. The UK has just 16 stations in operation, according to

Even if these issues were all suddenly ironed out, hydrogen lost to lithium ion a long time ago as an automotive fuel, argues Andy Leyland, head forecaster at battery materials analyst firm Benchmark Mineral Intelligence. “The amount that has been committed to the lithium ion supply chain, excluding charging infrastructure, is around $600 billion [£470bn]. Hydrogen is maybe $30bn or max $40bn. It’s a completely different scale,” he said. “In many respects, lithium ion is too big to fail over the next 10- to 15-year period.”

In the meantime, hydrogen is expected to fill niches where batteries can’t compete, such as for high-mileage commercial vehicles that are too busy to be idled while charging. “We think it’s good technology mostly for fleets and for cars that come back to the same point every night where you can leverage investment on the H2 refilling unit,” said Tavares.

The enthusiasm for the fuel in South Korea and Japan is expanding into partnerships, with car makers not so willing to start a programme of their own from scratch. Hence, BMW is linked with Toyota and Hyundai with Audi.

And the price will come down. “By the third-generation Mirai, we fully expect fuel-cell costs to be comparable with hybrids,” Toyota Europe head of sales Matt Harrison said. “We believe fuel cell vehicles have a huge potential.”

Both electric and hydrogen cars are crucial for future

Under the skin: Why hydrogen could be an easy cell

I agree with Carlos Tavares

I agree with Carlos Tavares regarding that the strong point,and future, of hydrogen is about commercial fleets that "are too busy to idle when charging" or that can return at the same point like public transportation or ships , for mass private transportation ? not so much : People talk about increase the electricity production and grids with EVs but in reality with hydrogen is much worse, because to run the same distance takes roughly 3x the energy required from an EV. 1Kg of hydrogen carries 40KWh of potential energy, even the most efficient PEM electrolyzer in the world has production efficiency of 70% so it takes at least 50KWh per Kg produced .Ignoring the 10-15% of energy loss to compress the gas, transportation (0-10%) and permeation losses, to fill a tank of a Toyota Mirai, takes 5Kg or 250KWh of energy that allow you to drive up to 312miles , Tesla Model 3 to drive the same distance takes 75KWh of energy. The infrastructure investment it's also much much more costly that EVs take for example "charging stations", a single high efficiency 2Megawatt PEM electrolyzer stack (that produces H enough for 200cars a day what is served by a small gas station) cost around 2+ Million dollars alone and has a costly maintennance (it literally runs on precious metals) Tesla built a supercharger at Las Vegas with 24x 250KW stalls 13x 22KW 88KW solar canopy and a 175 KWH buffer battery that can serve up to 1500EVs a day and they spent 1.066 M of dollars .

There's no cheap and easy way to produce, transport and store Hydrogen!  BP also knows it costs £2 million to build each H station but only a few thousand to install an 'electricity pump' on an existing forecourt, which is what they're currently doing.

Not nay-sayers just realists, if only Toyota, Honda and Hyundai had waited till they could build a practical, efficient car at reasonable cost, much like Nissan did with the LEAF. There's actually a rumour Honda are more likely to pull out of making the Clarity rather than replace it

The problem with electricity is infrastructure scale up. If your average petrol station migrates to 6-8 EV charging spots over time instead of pumps, the , if they are all 150KW superchargers (not now but in a few years) that's potentially over 1MW of power draw. If 100+KwH batteries become commonplace to redyuce range anxiety many people (those with drives anyway) are going to want chargers runing a lot more than the 7kW domestic chargers now available so that they can recharge fully in 8 hours or less.

Does our electricity grid have the capacity to put in lines like that - no, not on the scale needed. Can it be upgraded, yes but at a high cost, far more than the few thousand to put the actual 'electricty pump' at each charging slot.

The cost arguments are more evenly balalnced than they first appear as our electricity grid is in no way adequate for what would be needed even for 20% BEV use, let alone 50%+ and so major spending will be needed for EV as well as Hydrogen

One of the biggest drawbacks to hydrogen is the cost and many nay-sayers always try to use as the reason it will never catch on. But quite recently there was a report that a UK univercity  had established a way to produces it far cheaper than existing methods. The next stage was to scale up to a bigger facility.

The boss of BP says he sees one of the mainstays of the company in the future as being hydrogen fuels and they were working on installing a network of stations around the UK.  So while hydrogen is some years behind battery tech in vehicle applications, there is no doubt that big money and research are being thrown at the tech now.