From £35,550
Intriguing variant of plush SUV is powered by both a hydrogen fuel cell and a conventional rechargeable battery
Open gallery
Close

Like the rest of the GLC range, the intriguing and rather effective plug-in hydrogen fuel cell version has received modest exterior styling tweaks and an overhauled interior benefitting from the latest MBUX infotainment system, digital dials and an attractive new steering wheel.

What hasn’t changed are the rather high-tech underpinnings, which offer a realistic glimpse of what we can expect in the post-petrol future. Nestling under the GLC F-Cell’s bonnet is a hydrogen fuel cell, which Mercedes engineers have managed to neatly install in a largely unmodified engine compartment; it even uses the same mounting points as the internal combustion-engined versions. Not only is this the most compact fuel cell the company has yet made, but it also uses 90% less platinum than that of the original B-Class F-Cell from a decade ago.

Linked to this are a pair of carbonfibre-skinned hydrogen tanks that are concealed under the floor. Holding a combined 4.4kg of hydrogen, they feed the fuel cell, which combines the gas with atmospheric oxygen to produce the electricity that powers the 208bhp electric motor mounted on the rear axle. The best bit of this set-up is that it takes as little as three minutes to replenish the tanks once they run dry.

However, the flaw in the plan is that hydrogen filling stations are currently rather thin on the ground. To counter this, Mercedes has also installed a 13.5kWh battery that can plugged into the mains at any time and gives around 30 miles of range on top of the hydrogen’s 250-or-so-mile limit. The theory here is that for most short-haul journeys (the kind most of us do), the GLC F-Cell can rely on the range-extending battery, with the hydrogen fuel coming into its own on longer trips that can be planned to include stops for gas fills. Simple – sort of.

We've already had the briefest of drives late last year in the pre-facelift model, but this extended test will allow us to discover whether it lives up to that early promise. 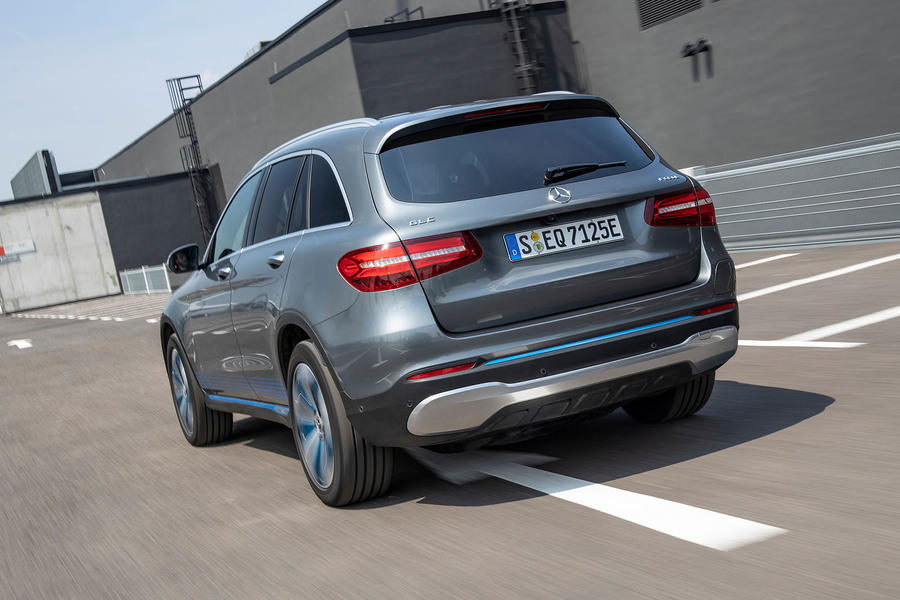 Perhaps the most impressive feature of the GLC F-Cell is that unless you were told, you’d never guess there were such sci-fi shenanigans going on under the skin.

On the move, it feels like a 'traditional' battery electric car, with the same smart step-off and near-silent operation, and apart from the graphic on the new 12.3in infotainment screen, you’d have no clue as to where the motor's power is coming from. Seamless is a word overused to describe the operation of some dual-fuel set-ups, but it’s an unerringly accurate description in the case of the GLC F-Cell.

Performance is brisk rather than, ahem, electrifying (think Volkswagen e-Golf rather than Jaguar I-Pace), but it feels totally in keeping with the car's character and remit.

Selecting Dynamic driving mode sharpens the accelerator response, but with a useful 269lb ft of torque available at all times and just a single gear, there’s always a smooth surge of acceleration all the way to a top speed that’s just shy of 100mph. That might seem low, but the GLC F-Cell gets there quickly enough and easily holds its own even on derestricted sections of autobahn.

Unlike other GLC models, the F-Cell uses a combination of coil springs at the front and air springs at the rear, both controlled by adaptive dampers. With the all the masses mounted low, even in its Comfort setting, the GLC F-Cell corners without excessive roll, while what the steering lacks in feel it makes up for with admirable precision. This isn't a car that you’d drive for fun, but there’s something satisfying about its quiet effortlessness of its point-and-squirt approach.

In reality, it's more at home when cruising, where its decently supple ride and impressive refinement make it relaxing companion - although deeper potholes and sunken drain covers can cause a shudder as the suspension tries to contain the movement of those large 20in alloy wheels. There’s some wind rustle at speed and the tyres can roar a little over coarse surfaces, but the car simply wafts serenely along the rest of the time.

Perhaps what’s most impressive about the GLC F-Cell is how easy it is to live with, lack of refuelling infrastructure aside. By making the fuel cell so compact, Mercedes has made sure that the GLC’s relative spacious interior remains uncompromised, while there’s only a moderate reduction in boot space.

As with the rest of the GLC line-up, the cosmetic changes on the outside are hard to detect, but those on the inside are extremely worthwhile. A highlight is the new MBUX infotainment, which operates via a slick and relatively easy-to-use 12.3in touchscreen. That said, the ‘Hey Mercedes’ voice command that can be used to bring it to life is occasionally set off by other similar-sounding phrases. 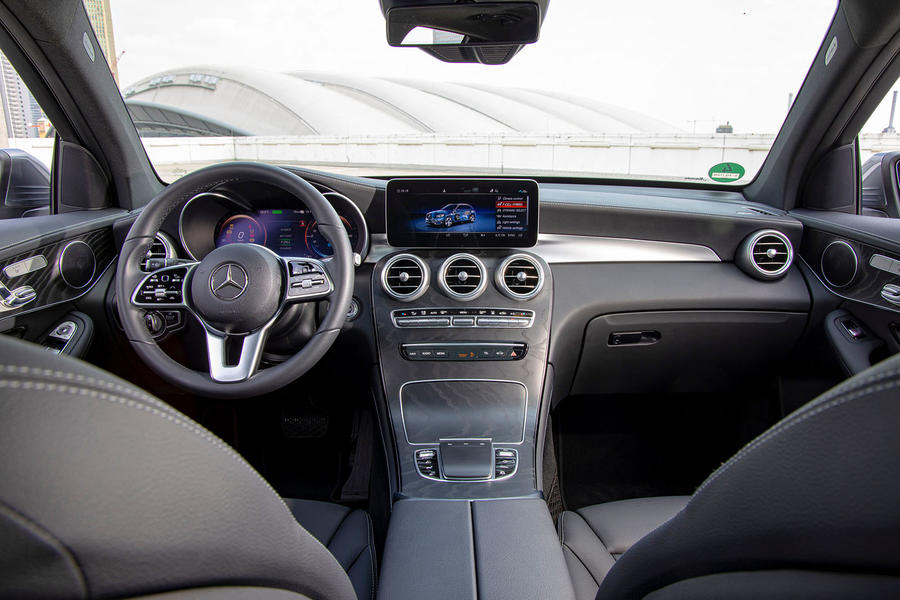 There are currently no plans to bring the F-Cell to the UK. Even in its native Germany it’s available in relatively small numbers and on a lease deal only, allowing Mercedes to keep a tight rein on the model. However, there is a sense of ‘never say never’ when it comes to British sales, especially against a backdrop of Shell’s recent announcement that it plans to roll out more hydrogen filling stations across the country. What's more, the GLC F-Cell has already been engineered in right-hand drive for the hydrogen-keen Japanese market.

Should Mercedes ever change its mind, the F-Cell would be a fine choice, with the mix of hydroge and battery power helping to make the transition from internal combustion a little less stressful for many. What’s more, the electric motor's refinement and effortless everyday performance makes it an excellent fit for the easygoing GLC. 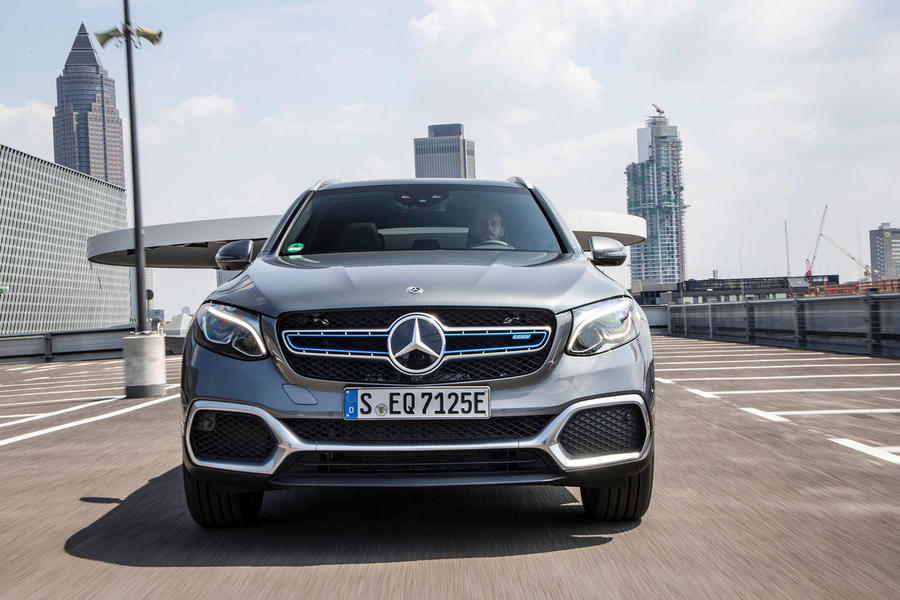 The lease on my Chevy Bolt is up in 9 months.  I've learnt what I need to know about it (I've found it a fantastic car) and will return it then.  I now want to learn about the GLC F-Cell and will commute by bicycle, Uber/Lyft and foot until Mercedes makes it available in California.

Guys you've accidently pictured one of the many H cars biggest problems. Don't do it again otherwise you'll never be allowed to test one again!!!

Is it not a bit weird that

Is it not a bit weird that this is based on the GLC rather than the EQC new electric vehicle? After all, it’s based on the same underpinnings but lower and presumably more aero efficient (and with a more up to date interior too).