BACK TO ALL NEWS
Currently reading: Suzuki iV-4 revealed in Frankfurt
UP NEXT
How the Bugatti Chiron became the first 300mph road car

The Suzuki iV-4 has been revealed at the Frankfurt motor show.

This new small SUV is Suzuki's answer to the Nissan Juke and forms part of Suzuki's plans to expand its model lineup. Heavily scuplted lines lend a modern appearance, and the Suzuki iV-4 retains the clam-shell bonnet and five-bar front grille that have become a hallmark of Suzuki's SUVs.

Other design features include thin side mirrors, roof-top spotlights, large daytime running lights and extra lighting around the front grille.

Suzuki says the production version of the iV-4 will be “an SUV for the present day: light in weight and boasting among the lowest C02 emissions in its class.” The company also notes that four-wheel drive will be available courtesy of its Allgrip system.

The iV-4 measures 4215mm long by 1850mm wide, with a height of 1665mm. An insider said the baby SUV sector is the fastest growing in Europe, and a high level of personalisation options, including a range of roof and dash colours, will be available. Bosses hope the production iV-4 will attract a wider section of buyers. The new car is based on an all-new platform, which is expected to underpin a number of future models.

Suzuki believes the iV-4 is very much part of the company's DNA, carrying on the company's SUV design themes. The baby SUV will be able to bepersonalised by customers through different exterior colour, texture and equipment combinations.

The car will be built in the firm's Hungarian plant and will launch in Europe in 2015 as part of plans to introduce five new models to the Suzuki lineup. The company will also launch a new city car to replace both the Alto and the Splash, a more spacious supermini and a production-version of the G70 concept.

The fifth model in the lineup is the SX4 S-Cross. The Nissan-Qashqai rival will cost from £14,999 when it goes on sale in October. 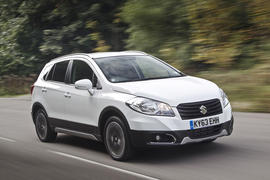 Presume the tiny mirrors are show items or camera holders.

That's a lot of lights to keep clean, although at least you can clean the two on the roof without bending over!