BACK TO ALL NEWS
Currently reading: Vauxhall boss on future plans & being "comfortably British"
UP NEXT
Spending 48 hours touring in a Ferrari Roma

Stephen Norman, the 63-year-old car industry veteran who took charge of Vauxhall in January, is convinced that the “major highlight” of his 43-year career lies ahead.

The task that will bring the glory to Norman and his team is the rapid restoration of Vauxhall to sales success and sustainable profitability, a project that a long line of decent managers, working under Vauxhall’s previous owner, General Motors, have already proved is no pushover.

However, having spent the first few months of his tenure devising a simple but ground-shaking five-point strategy for a Vauxhall turnaround – which I am in the company’s Luton HQ to hear about – and having had his plan rubber-stamped by the big PSA bosses with a speed GM could never have managed, Norman counts his chances of success as very good. Not that odds matter “because I don’t intend to fail”.

Such bullish declarations are unheard of for recent Vauxhall bosses, weighed down by their predecessors’ lack of success, and beholden to a controlling German management itself controlled from a US ivory tower. 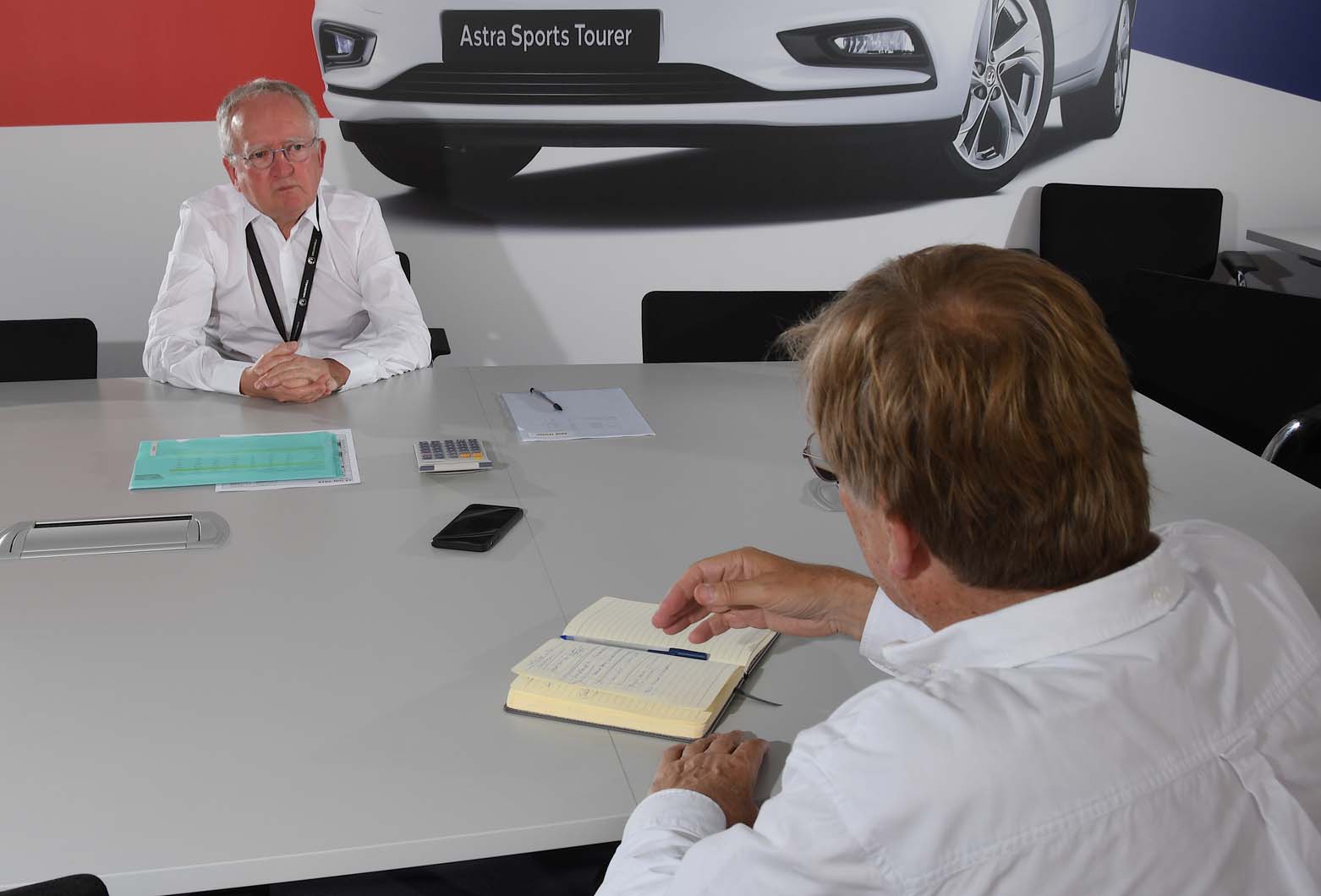 They have been either competent place-holders or haven’t lasted. Vauxhall has plodded on as an ‘always-there’ kind of company, selling cars with a slightly lower brand image than they deserved to a gently declining band of usual suspects.

But decision-making is different now. Norman has a lot of authority because the UK boss’s job has been redefined. But in any case, under Carlos Tavares (with whom Norman has worked for more than a decade) and German-based Opel boss Michael Lohscheller, decisions are “extremely simple and extremely rapid”.

Norman readily acknowledges Vauxhall’s time in the slow lane. He’s nothing if not a realist. But when we move to a boardroom near his office – one wall covered by the simple, graphic ‘True Brit’ Vauxhall Astra ad appearing on hoardings all over the country – he begins with a short UK car market history lesson to demonstrate that Vauxhall is a far better company than many think. “I really take umbrage when people say Vauxhall is a disaster area,” he says. “It can do better, for sure, but it’s not so different now from what it always was.”

Norman produces charts to demonstrate that whereas Vauxhall (current UK market share 7.6%) was doing around 9% in the post-BL days of the early 1980s, Ford has dropped from 30% to not much more than a third of that today. Vauxhall did jump to 16% for a few years when the market suddenly saw the Cavalier as a far better bet than the Ford Sierra but, broadly speaking, Vauxhall’s fortunes have been “less irregular” than almost anyone. Premium manufacturers (whose volume has expanded from 2% to 20% in the period) are the real winners.

Other myths? Norman deeply dislikes the inference that Vauxhall can’t be successful because it depends on company car sales. “We’ve always done it,” he says. “Even back in the 1960s, our Vivas, Victors and Veloxes were company cars. Today, our Corsa sales are mostly retail, but the bigger cars still go to fleets. We sell to user-choosers, and there’s nothing wrong with a company car sale as long as it’s about as profitable as a retail sale. Our business is absolutely not built on sand, but on a different kind of rock.”

In pictures: cars of the Vauxhall heritage collection

Another popular Vauxhall criticism, says Norman, is its tendency to pre-register a large proportion of its cars at the end of each month – up to 21% of total volume against a national average of 15%, he admits with trademark candour – as a way of forcing cars into the market, albeit at lower prices. Exaggerated sales in the last three days of the month and big sales to hire fleets are other criticised volume-boosting measures, but Norman declares “everyone’s on that wagon”, producing figures to show that at Vauxhall both practices are in solid decline. 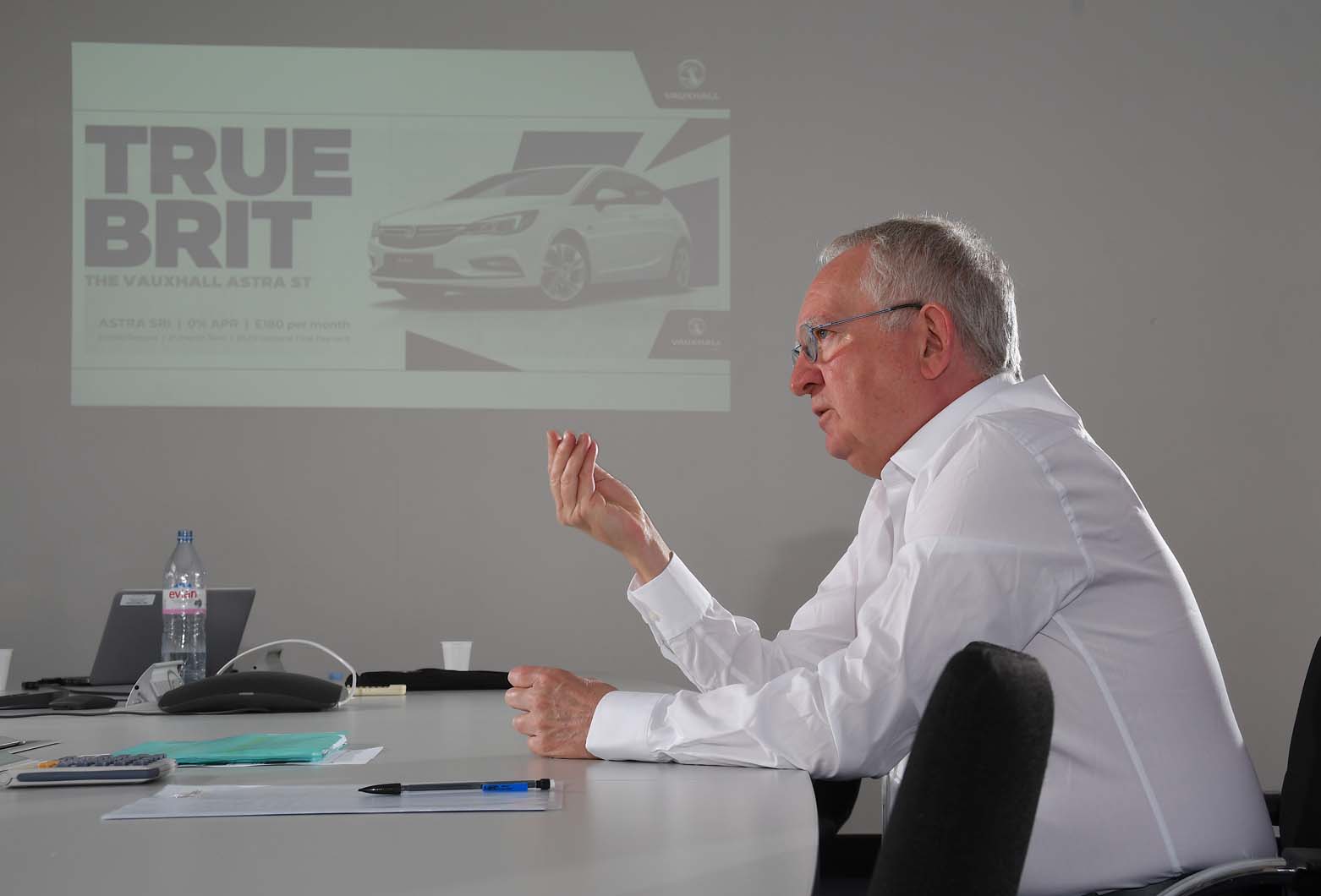 Then, rather like a rabbit from a hat, he produces a killer fact on Vauxhall’s all-important pricing power: by starting to refuse deals that “undersell ourselves”, the company has boosted its average transaction prices to within 4% of Volkswagen, everyone’s role model. This, he believes, made an important contribution to the remarkable Opel-Vauxhall financial turnaround announced last month and will help more to help in future. Norman says he will add efficiency and lower costs by gradually shrinking the Vauxhall line-up to three van and six car lines. The vans “choose themselves”, he says, based on size and the fact that the all-important UK-made Vivaro is coming next year. The car offerings will be a new Vauxhall Corsa, new Mokka, Vauxhall Astra, the Crossland and Grandland SUVs, and the Insignia executive saloon.

“It’ll be a slimmer range than many of our competitors,” says Norman, “but it’s what we need to reach our objectives.”

2019 Corsa to get radical overhaul

Serially unsuccessful since 1999, Opel and Vauxhall recently contributed a near-miraculous £445 million profit to PSA’s half-year bottom line. What is more, the brands did it on the extremely healthy operating margin of 5%, respectably close to PSA’s own stellar 8.5%. Norman professes himself “not very surprised” at the achievement, in the sense that there’s more to be done.

Conditions are right, Norman believes, for a turnaround strategy to be effective. Most of the products already look strong. The UK-made Astra continues to win respect as a Volkswagen Golf competitor, even if sales are resolutely unremarkable. The Mokka, Crossland and Grandland SUVs sit in the market segments that appeal to British buyers. The graceful and capable Insignia executive saloon continues to be highly rated in the premium sector. A new Combo Cargo (Berlingo-Kangoo fighter) is due soon, and after that comes the biggest product news of all, an all-new Vauxhall Corsa supermini. And there will be a new PSA-based Vivaro van next year. 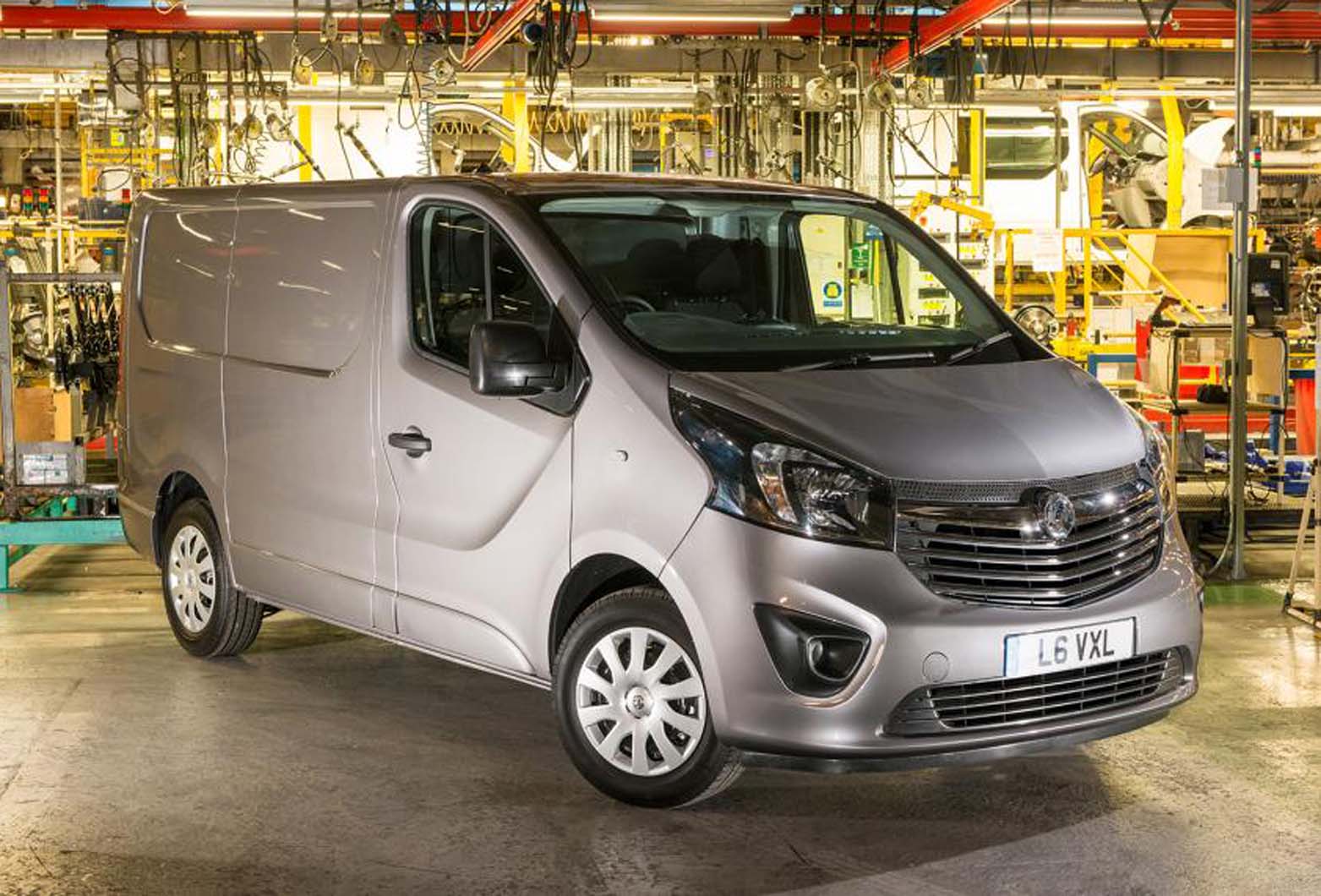 The five-point plan, Norman says, runs for the next three years and is designed to capture close to 10% of the UK’s combined car and light van market, estimated at 2.75 million units per year, of which around 350,000 are vans. Vauxhall isn’t claiming it can beat Ford, the market leader, but wants to be “a solid number two, not a vulnerable number two”. “We’re not presenting Britishness as a reason for purchase,” insists Norman. We say the reasons for purchase are things like value, approachability, ingenuity and progressiveness. The Britishness is a differentiator.

“We aim to position ourselves as a reference brand among mainstreamers. Not a prestige brand and certainly not a ‘me-too’ brand. We want to be the UK reference for what we’re good at. We make great cars for modest customers. Some people in this market are ashamed to put it like that. But we’ve never tried to be something we’re not. We’re confidently British.”

The five-prong plan sounds simple but it’s very bold, especially for the Vauxhall of the old school. In short, it goes like this:

1) Boost sales of light commerical vehicles from the current 9% to 14-15% with the aim of becoming a strong number two to Ford in this market and get closer to the sales performances of the past. Use a slimmed- down three-van range with the new Vivaro as a springboard. Reorganise LCV dealers into between 50 and 75 “van business centres”.

2) Keep backing off pre-registrations, a practice that cuts profit margins and makes sales less valuable. This should be possible as quality of products keeps improving. Reversing the well-known John Lewis slogan, Norman says Vauxhall must stop “underselling ourselves” to a point where the incentives stop working.

3) Refranchise the dealer body, cutting the current 330 dealerships to 250 by 2020, boosting average annual sales per dealer from 290 to 415 units. Norman promises “a radical effect” on dealer viability. This new policy has been under way for several months, and he has been roundly criticised for it. “Leaving things unchanged would do a disservice to dealers themselves,” he says.

4) Reorganise parts distribution, setting up 46 countrywide group parts hubs, selling not just Vauxhall, Peugeot, Citroën and DS parts, but other makes’ components as well. Manufacturers have been losing earnings onparts–this is away of fighting back.

5) Improve Vauxhall’s brand strength, a move already started with the ‘True Brit’ campaign, which will soon give way to a ‘Keep calm and carry on’ SUV theme. There’s another in the pipeline whose message will be: “Don’t do ‘ish’, do British.” The inference is that typically British messages sometimes lack positivity – as in ‘slowish’ or ‘smallish’ – but liking British can be wholly positive.

Vauxhall-Opel design boss on future look of the brand

Opinion: Vauxhall takes charge of its own destiny

I'll Have A Pint of What He's Drinking

A great future for Vauxhall really?, Vauxhall will continue as it has over the past forty years being Opel's with a griffin badge instead of the lighting flash worn by the German parent but using PSA platforms and running gear. Since the last Victor/VX and Viva/Magnum rolled down the line in the seventies the only product badged as a Vauxhall that's not been an are the Monaro(Holden) Monterrey (Mitsubishi), Sintra (GM US) VX220(Lotus) and the VXR8 (Holden again) Now the first vehicle with a Griffon on the front is the Vauxhall Combo which looks awfully like a Berlingo/Rifter with a Vauxhall badge on,not exactly an encouraging sign is it? As there aren't that many Vauxhall sales in Europe compared to Europe and with the departure of the UK from the UK ,I wouldn't be surprised at all if PSA treat this "Great British Brand" like they did with Talbot that didn't last too long did it?

A great future for Vauxhall really?, Vauxhall will continue as it has over the past forty years being Opel's with a griffin badge instead of the lighting flash worn by the German parent but using PSA platforms and running gear. Since the last Victor/VX and Viva/Magnum rolled down the line in the seventies the only product badged as a Vauxhall that's not been an are the Monaro(Holden) Monterrey (Mitsubishi), Sintra (GM US) VX220(Lotus) and the VXR8 (Holden again) Now the first vehicle with a Griffon on the front is the Vauxhall Combo which looks awfully like a Berlingo/Rifter with a Vauxhall badge on,not exactly an encouraging sign is it? As there aren't that many Vauxhall sales in Europe compared to Europe and with the departure of the UK from the UK ,I wouldn't be surprised at all if PSA treat this "Great British Brand" like they did with Talbot that didn't last too long did it?

You have managed to display huge ignorance in just a few words. What brand/model of vehicle did you spend your hard earned on, given those foolhardy words?.