BACK TO ALL NEWS
Currently reading: Ultimate Chelsea tractor: Prodrive Hunter meets central London
UP NEXT
Hidden gems: A peak behind the scenes at Beaulieu

It would seem that they’ve removed the massive rear wing. But as the good people of Prodrive unload their curious new car from a trailer into the depths of central London, I’m not sure that has left it much less conspicuous.

Heads turn. Cyclists stop. Runners take pictures. Questions come. What? How many? How much? How fast? Has Fisher-Price made a 4x4?

First, then, to what. This sand-coloured blob, this “Ferrari of the desert” (as per Prodrive boss David Richards), this 1:1 Tamiya fever dream turned reality is the Prodrive Hunter, and it barely fits onto the trailer it has arrived on.

But it is 2.3 metres wide, which is 100mm wider than an original Hummer, and you will remember how wide that was. Sean Connery couldn’t drive one around San Francisco in The Rock without “hitting every f***in’ thing in sight” and there’s considerably more space there than in Knightsbridge. 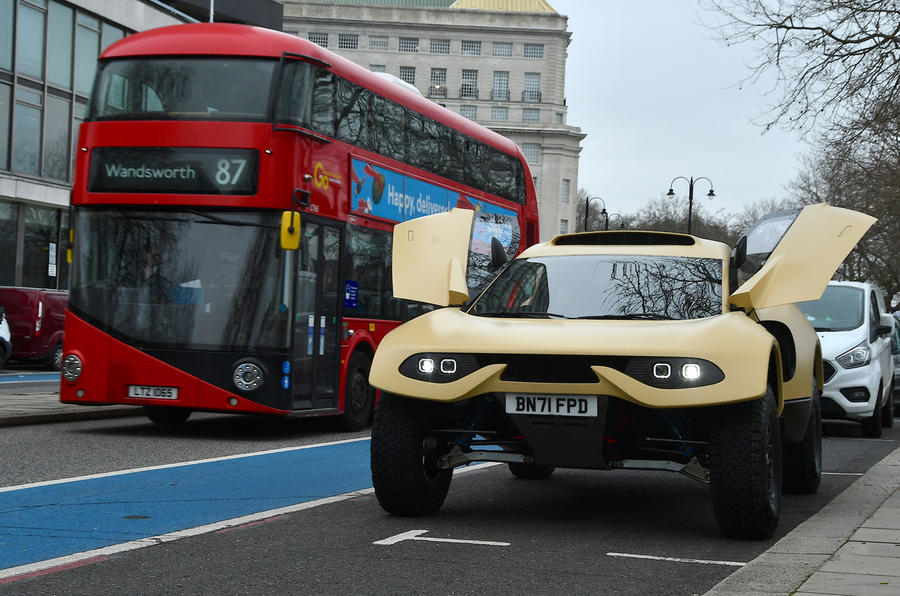 Anyway, the Hunter isn’t much narrower than the biggest trucks that are allowed to conventionally ply Britain’s roads, plus it’s left-hand drive, the tiny door mirrors don’t adjust, the side windows are small and there’s no rear glass.

Nevertheless, it seemed a bright idea to bring it to London, because the capital is occasionally home to ridiculous supercars and the ridiculously wealthy (although fewer of them than usual soon, perhaps), and this would seem just as incongruous.

Wouldn’t it be a giggle, then, to drive this car around some of the most absurd places that it could be driven, it was suggested, by somebody who clearly wouldn’t have to actually do it. Ha, yes, that sounds like fun etc. Then I get in, and it doesn’t any more. I’m quite scared.

Before we set off, I should give you the back story. Prodrive makes good competition cars, as I’m sure you’re aware. GT and rally cars, most notably. Sébastien Loeb took one of the latter to second place in the Dakar Rally in January. And this effectively is a road-going customer version of that car. 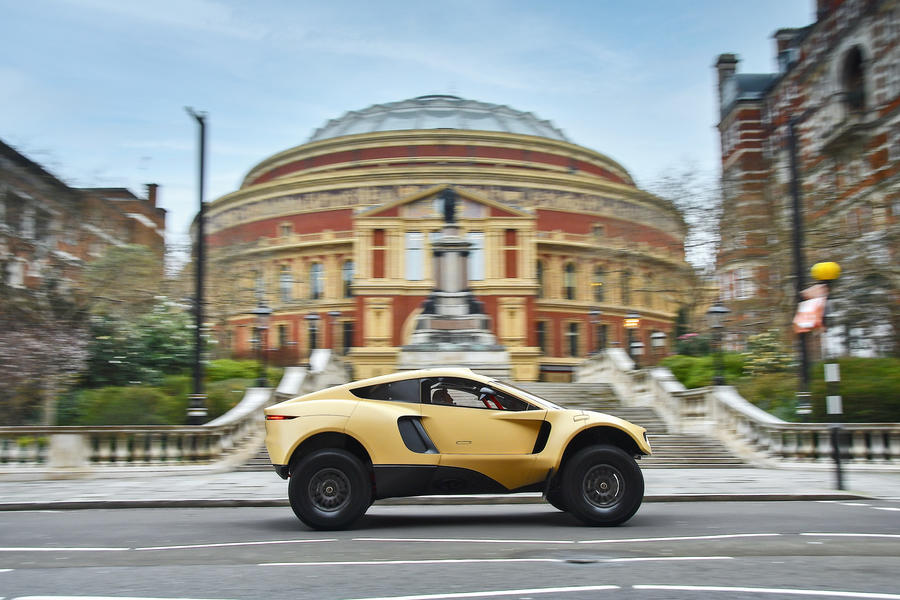 It’s technically a road prototype and registered as one, but it’s also the first customer car of 25, destined for the garage of the Bahraini royal who helped finance and put the race team together. Each Hunter costs £1.5 million (before options and including VAT), and three are accounted for so far.

Cross-country rallying is a brutal form of motorsport, perhaps the most extreme of all (although I can imagine Icelandic hillclimbers might have something to say about that), and the Dakar is its pinnacle event.

It is held in Saudi Arabia these days, its original North African routes being deemed too dangerous to competitors (Saudi Arabia is instead primarily dangerous to minorities and human rights activists), but the rally itself is still incredibly demanding.

Over 13 days, 2500 miles of special stages and 2500 more ‘liaisons’ between stages, it hammers through the desert and, while surely at its hardest for quad or motorbike riders, it requires a special sort of car, too. 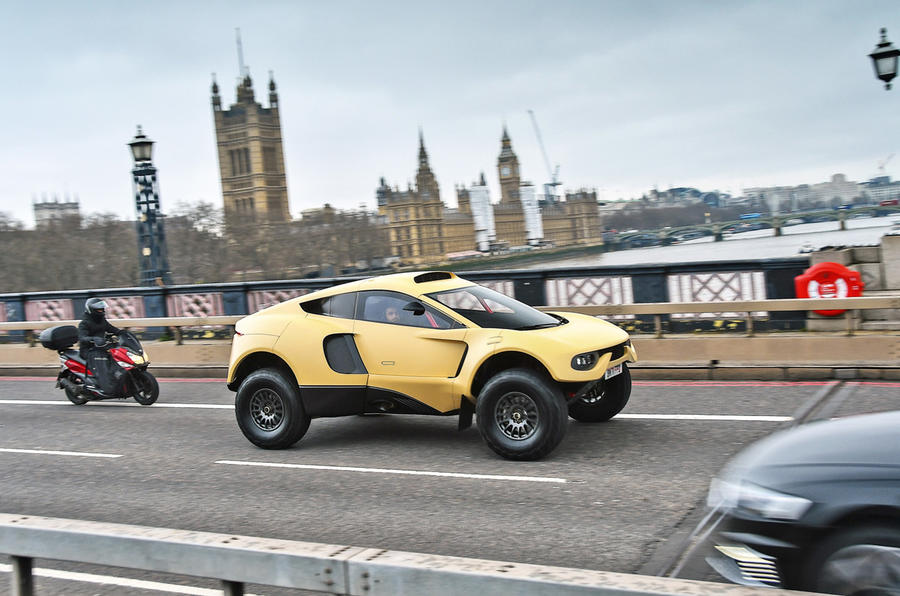 Hence the Hunter, or, as it’s known in its competition specification, the Bahrain Raid Extreme (BRX) Hunter T1+. It has a tubular steel chassis, clad with so much carbonfibre that you would be forgiven for thinking it’s a carbonfibre tub with steel subframes. It isn’t; the tight fit and amount of it ensures that sand is kept out of the cabin.

From the chassis is hung double-wishbone suspension all around, with two springs and dampers at each corner and anti-roll bars front and rear.

Despite appearances, the engine is in the front. Well, of a fashion. Pull the front bodywork clear (it has a satin finish and the biffability of a school chair) and you still won’t see any of the engine, bar the intercooler.

The twin-turbocharged 3.5-litre Ford V6 (of Ford GT and F-150 Raptor fame), making 550bhp, is set so far back that it’s effectively inside the cabin itself, forcing driver and passenger either side of it. 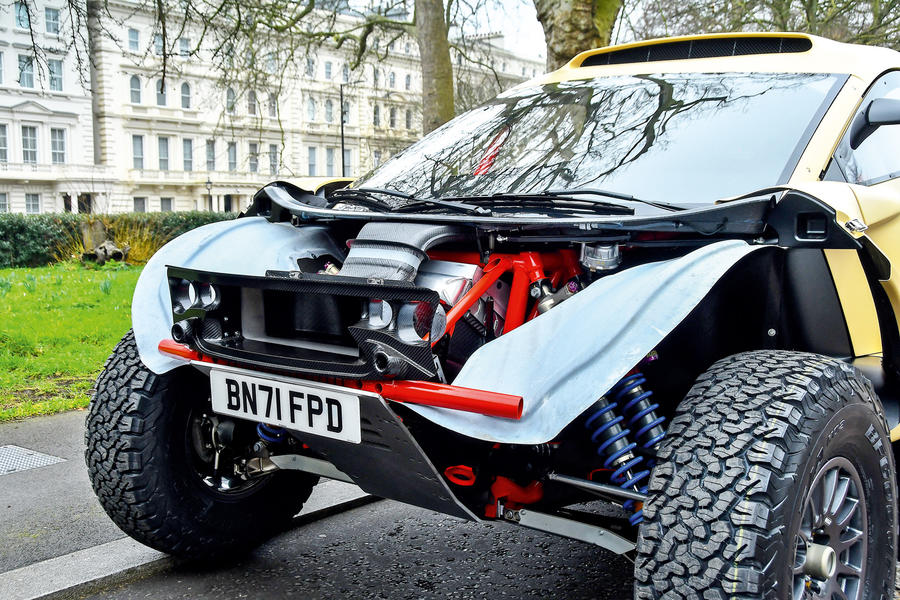 If you want to change the spark plugs, it’s easiest to take out the dashboard. If a team needs to change a belt, it’s a two-hour job. And for bigger work than that, it’s easier to lift up the chassis and drop the engine out beneath. But it’s a well-tried unit; the idea is that for the most part it looks after itself.

The V6 drives through a Sadev six-speed sequential gearbox with hydraulic actuation to all four wheels, with a 50:50 power split and independently lockable front, middle and rear differentials. The transmission is the first of a few differences over the rally car.

Dakar stages are long, so the Hunter carries a lot of fuel: there’s a 500-litre tank located right behind the cabin. There’s space to the sides of it, ahead of the rear wheels, to carry spare wheels – so the ‘vents’ in the bodywork don’t go anywhere.

Prodrive will offer some kind of luggage space here, while today a spare wheel is mounted under the coupé-like body at the very rear. There’s room for two, which is what rally cars carry, because that’s as many as they’re allowed. 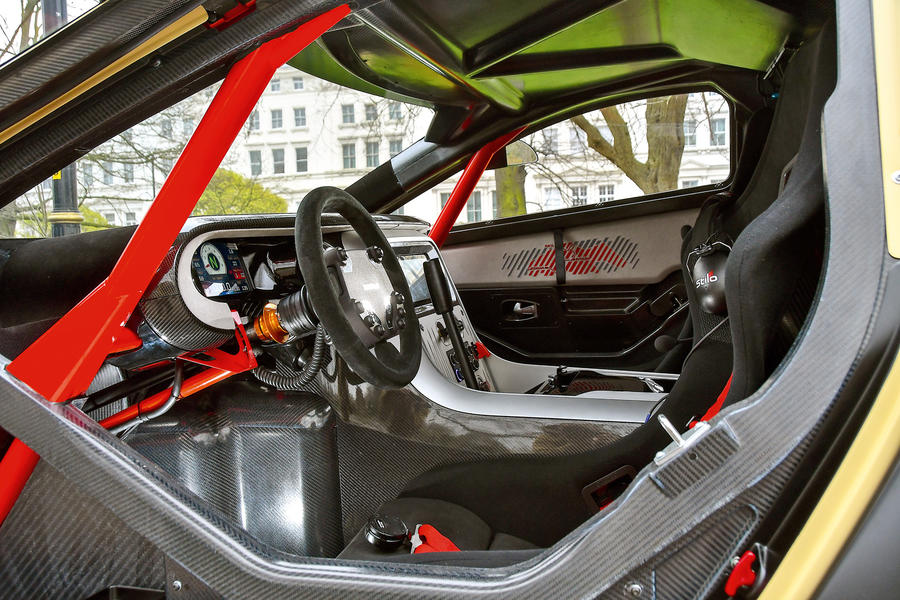 The doors hinge easily upwards on gas struts, light and easy, more like the lid of a garden storage chest than a conventional car. The aperture presents an odd shape and a high one, above the lower body and the side-exit exhaust pipes.

But with no scaffolding covering half of the door like in most competition cars or the Ariel Nomad, entry and egress aren’t so hard. It’s like swinging yourself up into a hammock.

The seats here don’t adjust, although you could specify ones that do. But the driving position is sound. The steering wheel is nicely sized, is round and has some clear buttons, and there’s a competition-spec three-pedal box.

Only the brake is mechanically connected – to a set of six-pot front and rear calipers and ventilated discs, with no ABS.

The throttle is by wire and so is the clutch. So you don’t get any feedback from it, but it’s calibrated to behave like a conventional one. Besides, there’s anti-stall software and the engine is said to be sufficiently torquey that the car will pull off on no throttle anyway. 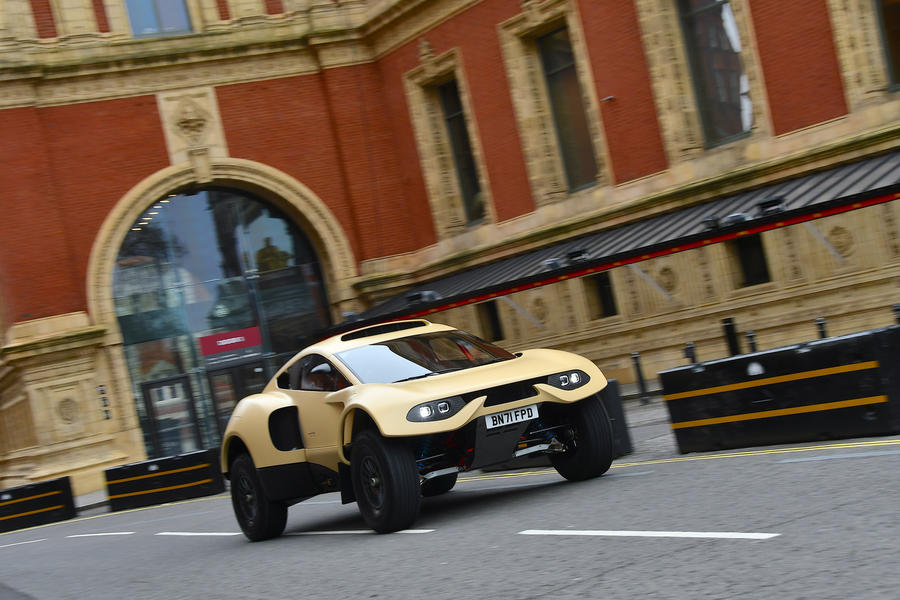 That doesn’t mean a clean getaway is easy. The first sticking point is the paucity of visibility to anything other than straight ahead. Then there’s the racket, partly of the engine itself but more so the clatter and chatter of the straight-cut competition gearbox. Ear defenders are a must.

Add differentials that are so eager to lock that they graunch with any kind of lock applied and that it’s easy to either over-rev or under-rev and you have a supercar that – and I didn’t think this was possible – is perhaps even less suited to London than the gold-wrapped Lamborghini Aventadors that you see parked around Knightsbridge. Which is, for better or worse, where we’re headed.

It is hard to imagine the Hunter turning any more heads even if it were painted in its red rally livery and had Loeb inside it.

The BMW X6 isn’t a coupé-SUV; this is a coupé-SUV. It’s not the most graceful shape ever to sit on a chassis (I think I would make mine a flareside pickup), but it certainly has presence. And even if you don’t see it, you will hear it. It makes an angry noise, a spiteful noise, a powerful noise. Not a sonorous or soulful noise, but one with volume. 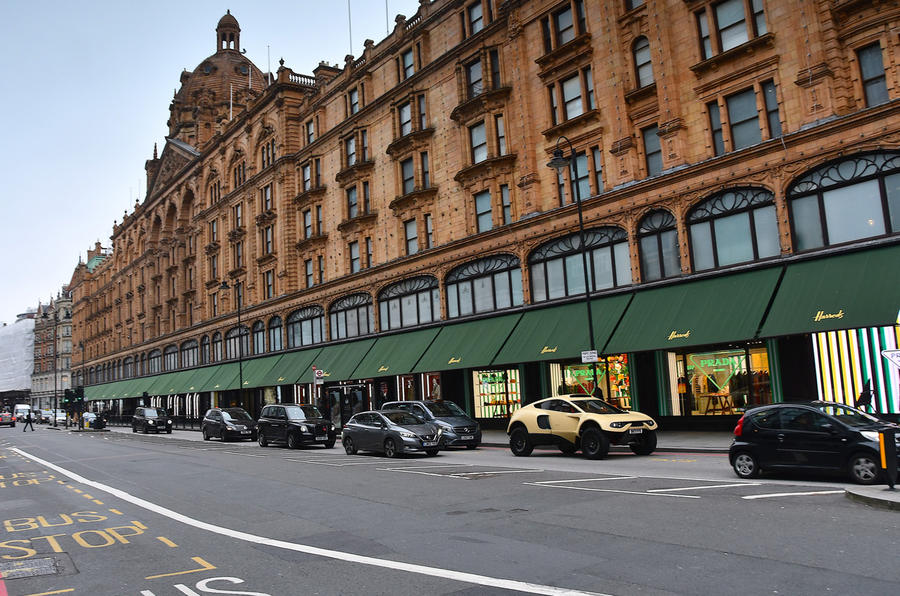 The steering is relatively light, relaxed at these speeds, and once you’re rolling (if, unlike me, you haven’t kangarooed away), the paddle gearshift, whose clutch you can forget on the move, is respectably smooth.

But not as smooth as the ride. There are 37in BF Goodrich tyres on 17in wheels, and with its large turning circle and whining diffs, plus the tremendous width and a weight of 1850kg, the odd kerb strike is as inevitable as it is painless.

It’s tremendous fun for a while, but you’re always aware this car is itching to be somewhere else – more so even than when sitting in a supercar in town. This is like using a jet ski in a garden swimming pool. 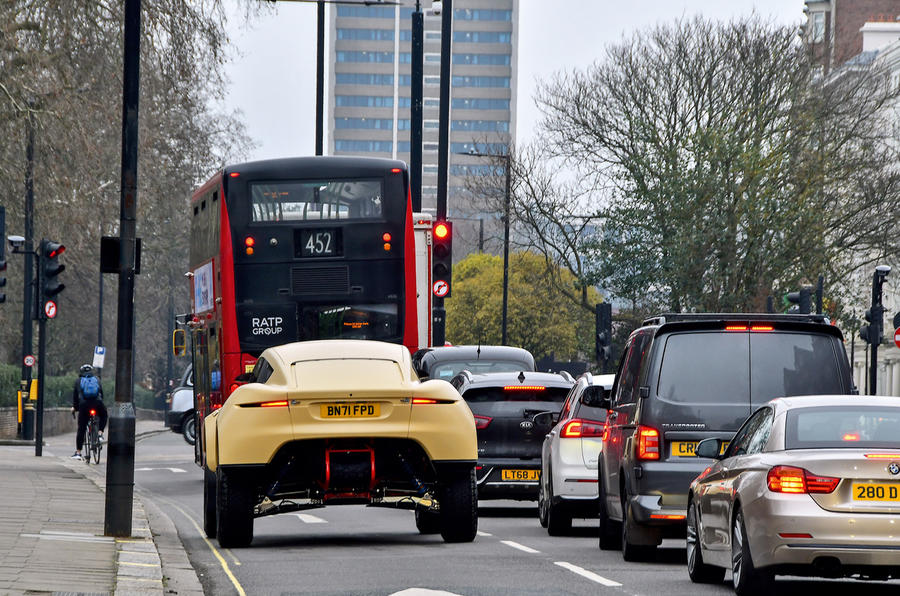 I’ve heard the point made that the best city car isn’t actually a city car at all, because it’s something like a Range Rover.

The Citroën Ami or a Smart aren’t narrow enough to get their own lane and parking spaces are mostly the same size anyway, so if you’re going to be sitting in traffic, you might as well be cocooned in leather-lined luxury. Well, the Hunter isn’t that kind of 4x4. It’s purposeful without compromise.

Let’s just say I’ve never been so relieved to hand a car back without incident – but also never been more keen to drive one where it belongs. 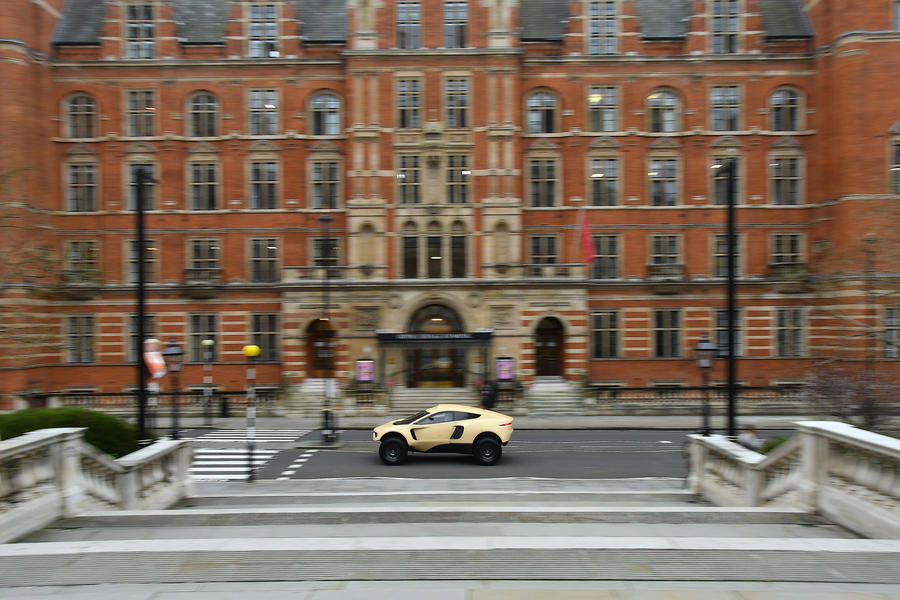 There are a few technical differences, besides a rather friendlier interior, between the road-going Hunter and the T1+ rally car. FIA rally-raid cars can’t have paddle shifts so get a big gearstick instead.

The second major change is that the 400mm suspension travel of the road car is superior to the rally car’s. Then there’s the power: turbocharged competition cars are boost-limited so make around 400bhp, but in this form, it’s more like 550bhp.

The FIA-FIM World Rally-Raid Championship begins with its flagship event, the Dakar Rally, traditionally held every January. I think it’s fair to say that the championship gets more coverage overseas than it does in the UK.

Did you know that, as you read this, the second round (the Abu Dhabi Desert Challenge) has just finished?

In April, the competitors will head to Kazakhstan, in June to Spain and then in October to Morocco. Cars, trucks, quads and bikes compete. The teams include BRX (with Sébastien Loeb as driver), X-Raid Mini JCW, Toyota, Red Bull Off-Road and PH Sport (running a Peugeot).

Log in or register to post comments
michael knight 21 March 2022
Surely Aston-Martin have something to say about that rear-end...
Rich boy spanners 20 March 2022

I read this after a Car and Driver article, from the sublime to the poitless.Any chance of just writing about the car without all of the waffing and 6th form poitics?

About £800 to fill the tank at current prices.

But with that suspension articulation it would be ideal for driving through a modern city with all the stupid bumps councils put in.