BACK TO ALL NEWS
Currently reading: Toy story: The wonderful world of model cars
UP NEXT
Dealers report huge drop in luxury used car prices in 2020

Simon gets it. Greg gets it. I get it, but I’m not sure Max, the photographer, gets it. Too young, I reckon. I’m talking about that feeling of nostalgia triggered by the sight of old die-cast model cars by Corgi, Dinky and Matchbox.

I’m surrounded by them here in the Collectors Old Toy Shop in Halifax, owned by Simon Haley, 54. He’s joined by Greg Brooke, 62, a customer and collector who has been coming to the shop for 27 years. 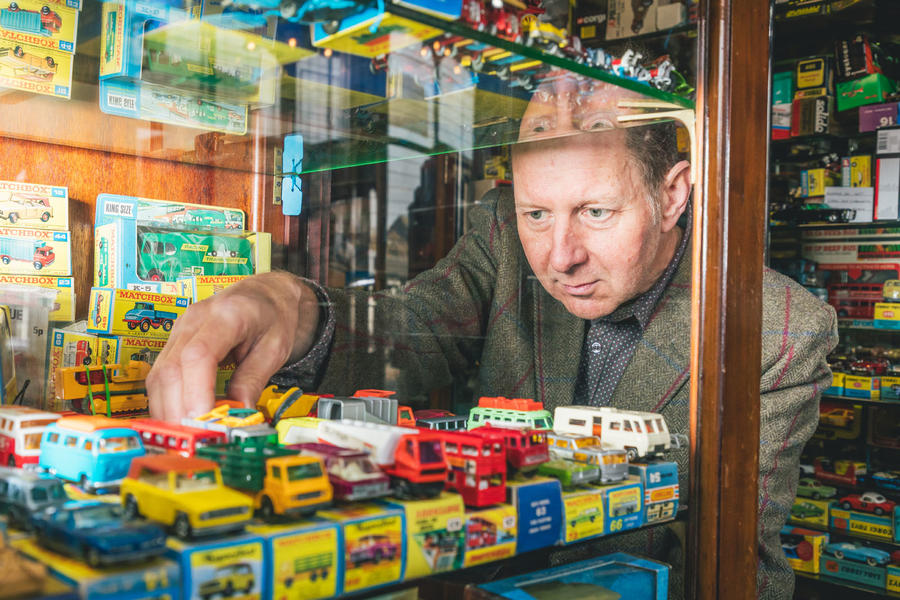 Every visitor of a certain age says it, apparently. Some turn up just to ogle the models and be transported back to a time when their idea of fun was pushing their own along the carpet. And then overnight they outgrew their Minis, Zephyr Zodiacs and fire engines, and up to the loft or, more likely, to the jumble sale the little cars went, never to be played with again.

Haley stocks a few hundred of these battered old relics from childhood. Priced from £1 each, they spill out of baskets at the back of the shop, where they’re popular not only with young visitors but also with collectors harvesting spare parts.

At the other end of the shop’s price spectrum is Haley’s Corgi No.267 Batmobile. It appears to be in mint condition and together with its original box is priced at £500. However, there are Batmobiles and there are Batmobiles… Haley’s is the so-called Black First Issue of 1966. His price is competitive considering that Collect-a-Toy, which publishes a price guide for popular collectors’ models, suggests that one in A+ condition with its box is worth £538. 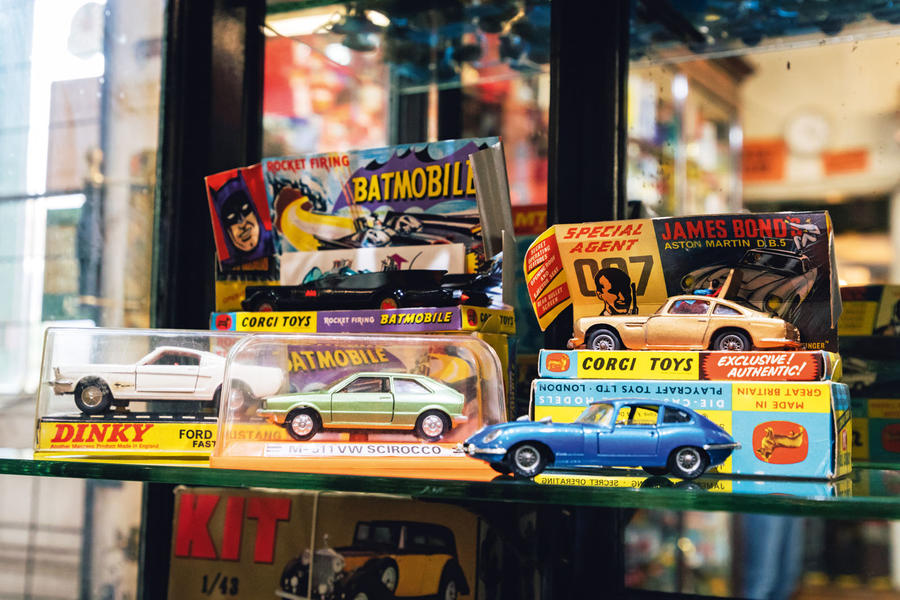 The guide also lists six other Batmobiles, the most expensive being what it describes as ‘Red Wheels in early box’ of 1973 with a guide price of £948, and the cheapest the Batmobile Black of 1974 at £245.

Incidentally, the first Batmobile wasn’t actually the Black First Issue but the Satin Black First Issue. It was quickly withdrawn because Corgi thought its finish too dull and changed it for a gloss one. Haley says a good one, if you can find it, is worth £1000.

Collect-a-Toy’s price guide also provides a neat little graphic showing how each Batmobile’s price has moved in recent years. Taking that Black First Issue as an example, the guide price for one in A+ condition started from a low of around £450 in 2008 before rising to £1000 in 2013 and falling to its present value of £538 in 2019. 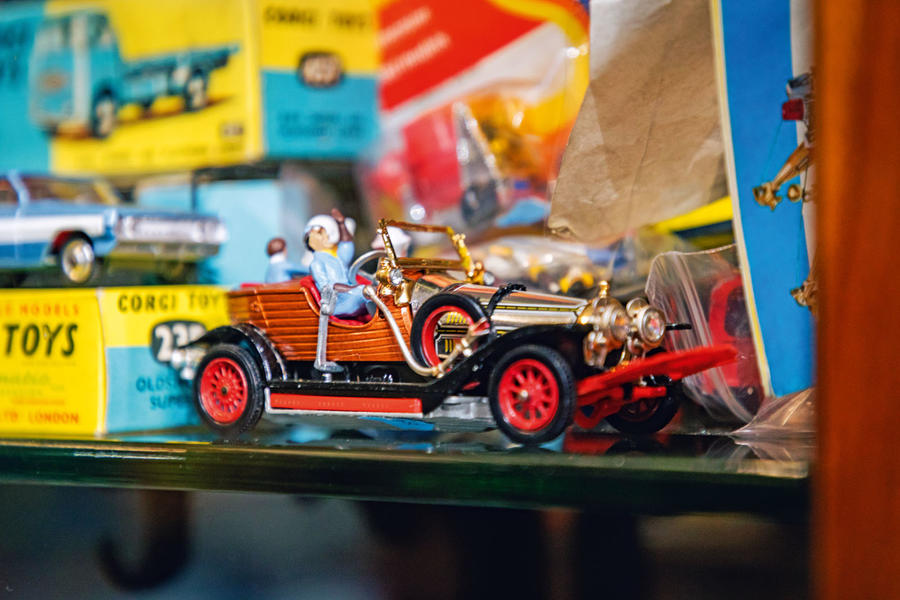 In between Haley’s cheapest motors and his most expensive is an example of that icon of childhood, the Corgi No.261 James Bond Aston Martin DB5. Launched in 1965 to coincide with the release of Goldfinger, the third Bond film, and fitted with machine guns, a bulletproof shield and, most exciting of all, a pop-up roof that allowed the ejector seat to fire its occupant skywards, the model was a smash hit with children. Today, boxed examples in good condition are highly prized.

Haley wants £250 for his almost mint example complete with box, instruction leaflet, two figures and, crucially, the unused 007 transfer. This compares favourably with a guide price of £502. The model has never scaled the heights of the Batmobile, peaking at around £575, but this may be due to its massive sales success, which means good examples are always coming to market. “The 1960s was the golden age of model cars,” says Haley. “The real cars they were based on were more exciting, film and TV tie-ups boosted their appeal and people had more money to spend.”

Competition was intense between Matchbox, Dinky and Corgi. Today, each brand has its followers but I’m attracted to the Corgi models by their superior finish and detailing. Collector Brooke agrees.

“It’s my favourite brand,” he says. “The cars are better proportioned and their colours are brighter. They were the first to have windows, too. In fact, Corgi’s slogan was ‘The ones with windows!’”

Brooke has more than 1000 cars in his collection, but says that while many have increased in value, collecting them has never been about making money. “It’s all about nostalgia – my memories of childhood and my own cars,” he says. “The first model I bought was a Matchbox No.5 red bus. It cost 10 pence in a flea market. My most prized is a Dinky Rolls-Royce Silver Wraith of 1959.” 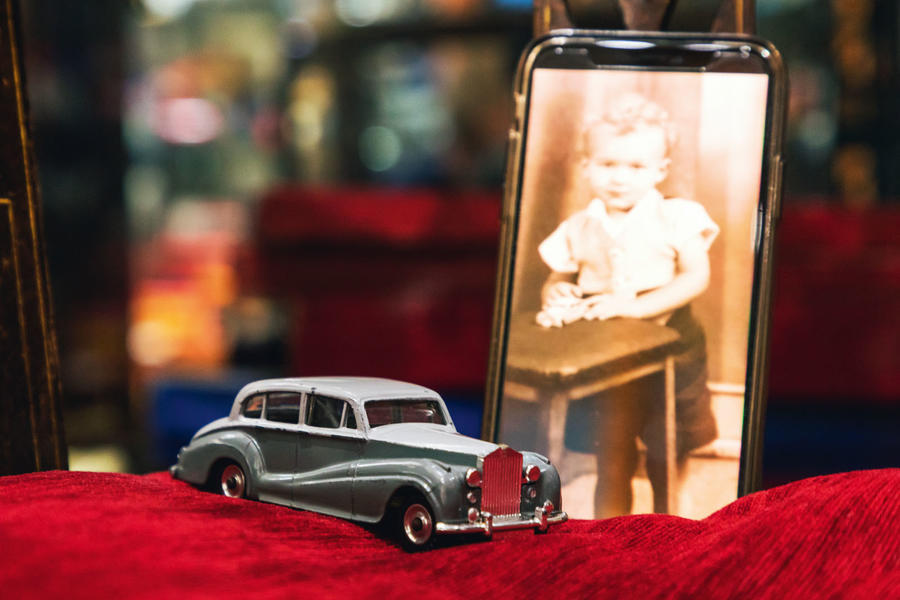 Where do all these collectable models, many still with their boxes, come from and, more important, what sort of child would keep their cars this way?

“I buy my stock from people who visit the shop, from markets and from auctions,” says Haley. “Private sellers who occasionally offer me their old cars boxed and in unplayed condition are often retired professionals who were careful with their things from day one.” Occasionally, he says, a load of unsold stock covered in dust is discovered. It could be anywhere in the world. Haley has his eye on Iran as a future source of top-quality models. The problem is that when big finds come to market, they upset prices, which is why Haley is loath to talk about model cars as investments.

“Just collect what you like and not with an eye on future values,” he says. “Cars still with their boxes command the highest prices, although the car itself must be in top condition.”

Something else that can affect prices is collectors’ advancing years. Richard Beale, valuer at Warwick & Warwick, an auction house that holds regular sales of model cars, says that the prices of cars that pre-date the 1950s are softening because the number of collectors who remember that period is declining. “On the other hand,” he says, “the market for 1960s cars and later is still buoyant.” 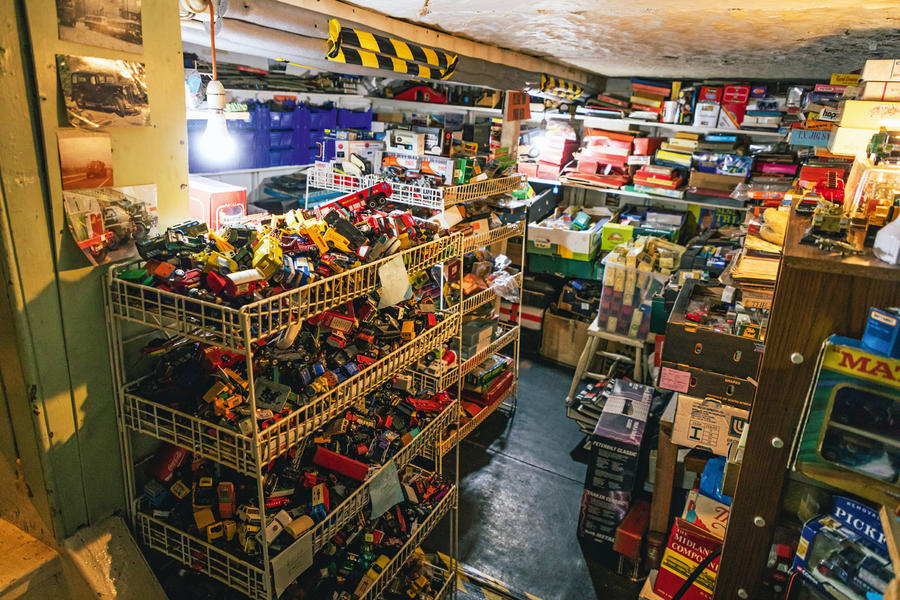 I like the look of Haley’s DB5, released when I was five and one of which I had before it got too damaged to be played with any longer. Haley shows me how its roof sits properly.

“Most have damaged roofs caused when the child pushed it down to relocate the ejector seat,” he says. “To avoid damaging the mechanism, they should have pushed the seat down first, then pressed down the roof. A collector will look for this.”

Maybe so but I’m more interested in seeing how far it fires the baddie in the passenger seat. Not very, it turns out, and worse, right in the path of the speeding Aston. I don’t remember that happening in the film.

I have a reasonable

I have a reasonable collection of model cars, mainly Corgi and Matchbox, but also a few larger scale Polistil models from the 80's. Many of them are in very good condition, but I did go through a stage of slightly modifying and repainting some with Humbrol paint, which won't have helped their value, but it was part of me. I also have a little collectors 'suitcase' which holds all my matchbox models in little crates. I don't think I'll ever part with them, unless its to pay for my care home.

I have a reasonable collection of model cars, mainly Corgi and Matchbox, but also a few larger scale Polistil models from the 80's. Many of them are in very good condition, but I did go through a stage of slightly modifying and repainting some with Humbrol paint, which won't have helped their value, but it was part of me. I also have a little collectors 'suitcase' which holds all my matchbox models in little crates. I don't think I'll ever part with them, unless its to pay for my care home.

Customed models, unless done perfectly will have a value of a pound or two, i have seen some awful ones, where they ask triple a mint and boxed original, and they wonder why they dont sell... LOL... MBX, again, if they are not in their boxes/Blister packs, and are not 100% mint also have a very limited value, my collection in December tipped 14,000 models, all mint and boxed, with the exception of about 900 that are loose, the majority are mint and in special plastic clear matchbox sized boxes, my collection has been valued at, well, Mercedes-AMG GT4 63s 4 Door with options money, and some, and that wont be enough to pay for a care home lunch let alone care... LOL

.. a 60's brand often overlooked in these discussions. A a car-mad child of that era I would agree that in terms of desirability, my choice was generally Corgi, Dinky, Matchbox, in that order - what I got depended on the health of my parents' purses at any given time (Matchbox being smaller and the cheapest for when times were hardest). However I also had amongst my large collection, the odd Spot-On model, and was particularly fond of them, mainly becuse of their 'rolling characteristics'. At junior school we would take our vehicles in to compete against each other in playground 'races' ie shoving the cars as hard as possible and seeing who's achieved the greatest distance: my Spot-On Humber Super Snipe estate would trounce all-comers: it seemed heavier and more 'free-wheeling' than the other makes, and remained champion for a whole term, until finally being de-throned by a Coles Crane, of all things (make unknown). Still rankles ..

Why was the original db5 gold

Why was the original db5 gold instead of silver or were the gold ones special editions? It's much the same with the original blue thunderbird 2 models. Odd.
Peter Cavellini 8 December 2019

Yes but the car in the film was silver

Yes but the car in the film was silver

I only remember the silver Corgi one, which I sadly, never got around to buying.