BACK TO ALL NEWS
Currently reading: Mini Cooper S at the Monte Carlo rally - picture special
UP NEXT
New 2021 Porsche 911 GT3: First ride in 503bhp flagship

This year marks the 50th anniversary of the Mini Cooper S taking its first victory in the Monte Carlo rally. The triumph went on to give the humble Mini and its driver, Paddy Hopkirk, a firm place in the history of international motorsport.

The classic Mini made its debut in 1959, powered by an 850cc A-series engine developing just 34bhp. It was John Cooper who first spotted that the Mini’s excellent handling characteristics gave it real racing potential; the only thing lacking was power.

In 1963, the Cooper S was launched, gaining a substantial boost of power from early Cooper models. It used the BMC A-Series engine; however its capacity was increased to 1071cc, meaning 70bhp and a top speed of 90mph. The modifications meant it finally had the grunt to win.

The pairing of legendary rally driver Paddy Hopkirk and the Cooper S remains to this day one of the best partnerships in motorsport history.

The Mini's small dimensions, low weight and sharp handling meant that what it lacked in sheer straight-line power, it made up for in the corners. The Cooper S was piloted to victory in the Monte Carlo rally twice more, first in 1965 with Timo Mäkinen at the wheel and again in 1967, driven by Rauno Aaltonen.

The first stage to Saint-Claude of the 64 Monte Carlo rally, set the scene for a true David versus Goliath story with a thrilling battle between Bo Ljungfeldt in a V8 powered Ford Falcon and Paddy Hopkirk in the Cooper. The handicap formula at the time was formulated to even out the vast differences in power and weight of competing cars.

This meant despite Hopkirk finishing 17 seconds behind Bo Ljungfeldt, Hopkirk led the overall standings. On the 1,607-metre Col de Turini, section Bo Ljungfeldt posted the fasted time, however the Minis legendary handling, coupled with Hopkirks ability to drive at epic speeds on the snowy downhill sections was something the bigger cars simply could not match.

The Cooper S defended its lead through the streets of Monte Carlo and overall victory was secured for the Cooper S. Team mates, Timo Mäkinen finished fourth and Rauno Aaltonen seventh overall.

In 1965, this time driven by Tim Mäkinen, the Cooper S raced to victory again in some of the worst conditions ever witnessed on the Monte. The Cooper S added grunt from its now-enlarged 1275cc engine gave it adequate grunt for the uphill stages. The Finnish driver and co-driver Paul Easter won five of the six special stages on the final leg of the rally, and remained penalty free of any penalty points for the entire race.

The “three Musketeers”, (Hopkirk, Mäkinen, Aaltonen ) as they were affectionately known were initially placed first, second and third in the 1966 rally,but were later disqualified by the French judges as the four additional headlights mounted on the radiator grille of the Mini Coopers were found to fail with French homologation rules.

Citroen driver Pauli Toivonen reluctantly accepted the hollow victory but vowed to never drive for Citroen again. The mini was back on fighting form in 67 and won its third and final Monte-Carlo rally piloted by Rauno Aaltonen. 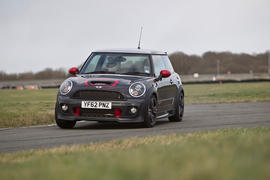