BACK TO ALL NEWS
Currently reading: The rebirth of Italdesign: £1.5m Zerouno hypercar driven
UP NEXT
2021 Kia Sportage: reinvented SUV priced from £26,745

Italdesign has revived ambition a half-century on from its birth. We drive its extravagantly-priced hypercar to discover what it means for the company's future
Open gallery
Close
Share story

This is a scene that has played out many times over the past 70 years. An other-worldly wheeled machine, as low as a dining table and much the same size, ricochets yelping bullets of sound through the scenery as it darts along a thread of road.

Often bright-coloured and gashed with odd-shaped apertures, it frequently leaves a wake of the open-mouthed and curious behind it. They may not know who its creators are, but they’ll know that it’s outrageously fast, outrageously expensive and outrageous to behold. 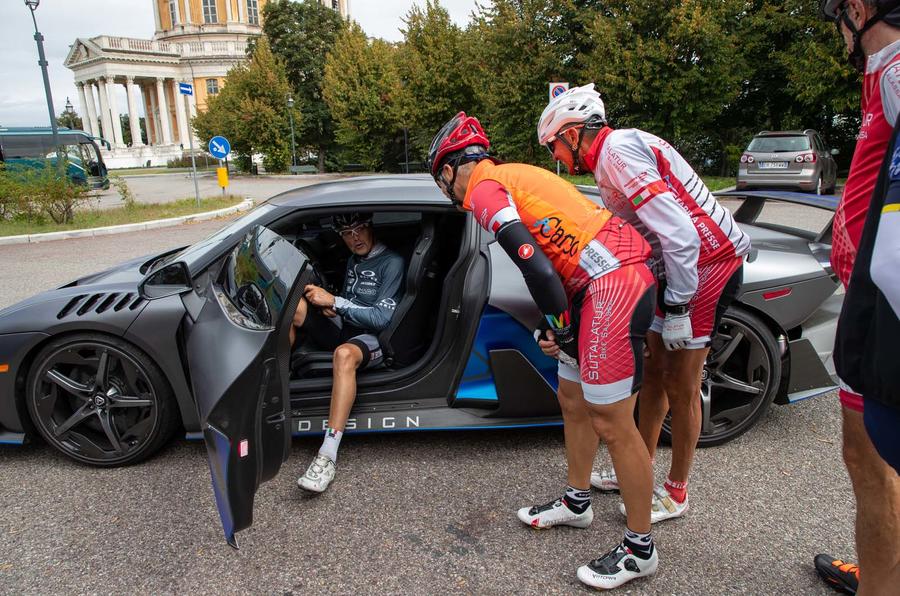 That scene has just repeated among the vine-ribbed hills around Alba, Asti and Cuneo in Italy, the Italdesign Zerouno gathering clusters of cyclists, smartphone-wielding truckers and gawping hikers as it bounds between villages.

The Zerouno is the latest supercar born out of the Italdesign studios in Moncalieri on the edge of Turin, one of literally dozens of extreme sports cars to have emerged from this temple of creation over the past 50 years. What’s different about the Zerouno, apart from it being extreme enough of construction, speed and price to be classified as a hypercar, is the nature of its industrial-sized mission. All five of these €1.5 million machines (yes, you read that right, and that’s without taxes) are already sold, as are two of the final five of the targa-roofed Zerouno Duertas.

That mission is to be a high-speed calling card for Italdesign, whose remit has changed. You may recall that this achievement-rich Italian vehicle design and engineering business, founded in 1968 by designer Giorgetto Giugiaro and engineer Aldo Mantovani, was in 2010 bought by the Volkswagen Group, thus ending its independence while also ensuring that it benefited from a regular supply of work. 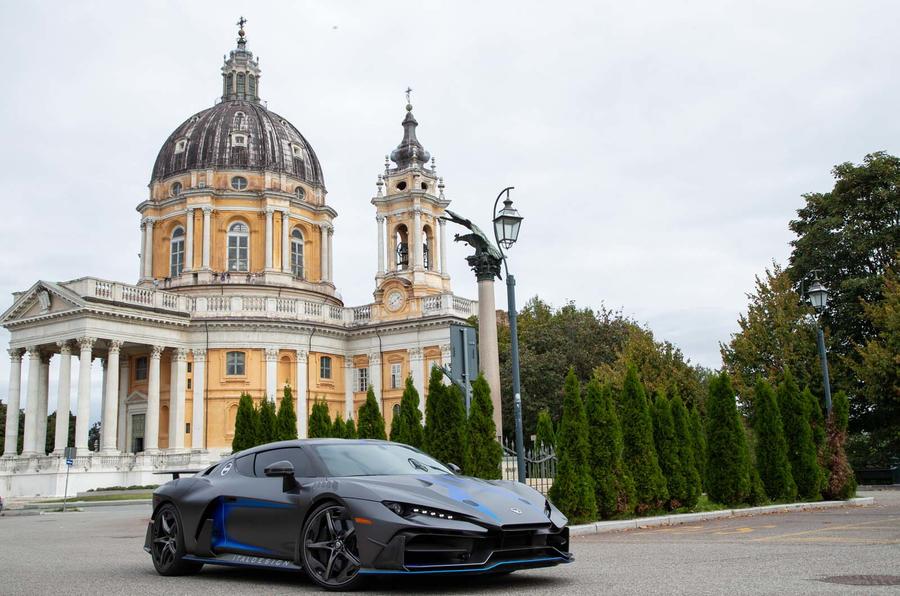 True, it was Italdesign that created, in the original Golf, the car that saved VW, but this prolific company has also produced any number of landmark Fiats including the Panda, Uno and Punto, as well as beautiful Alfa Romeos, Maseratis, the BMW M1, the Lotus Esprit and countless concept cars, many of them highly influential. So the harnessing of Italdesign to one car-making group was in some ways a sad outcome, even if the future of vehicle carrozzeria has turned precarious over the past two decades, the climate threatening Pininfarina and snuffing out Bertone.

Happily, Italdesign’s fresh remit is to chase for business not only with the VW Group but also every other car maker, just as it used to. The reason for that change of direction is rather unexpectedly linked to a scandal, namely the 2015 revelation of VW’s diesel emission misdemeanour(s), the aftermath of which saw a decline in Italdesign’s orders. At the end of the same year, it started looking for work beyond the VW Group. “In 2015, only 1% of our business was for external clients,” says CEO Jörg Astalosch. “Now it’s 25%, and the aim is to get to 50%.” 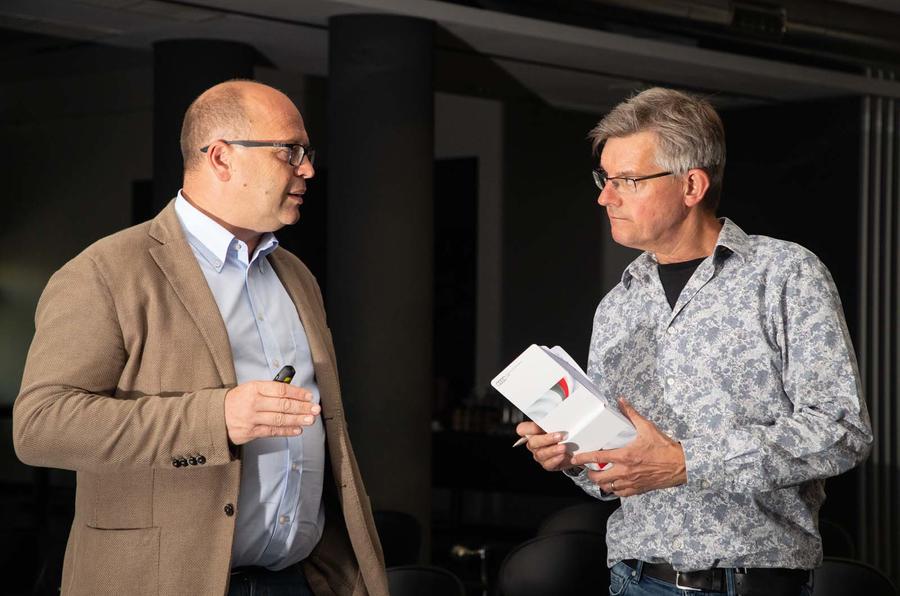 You might wonder why a car maker would entrust a rival with developing its secret project but, as Astalosch explains, “every customer is kept separate and secret. They can audit us at any time, and confidentiality can be contractually guaranteed. We stay fit, because they can visit at any time. Even our chairman, Volkswagen’s head of purchasing Bernd Martens, doesn’t know who we work for. That’s only revealed if the client wants to buy VW Group parts.”

Operating Chinese walls like this is how independent consultancies must work regardless of owner, and work it apparently does for Italdesign. Astalosch mentions Vietnamese start-up Vinfast, for which the company is developing an SUV, a saloon and a city car, and China’s First Automobile Works as customers, as well as automotive clients in America, northern Europe, Japan and Korea. 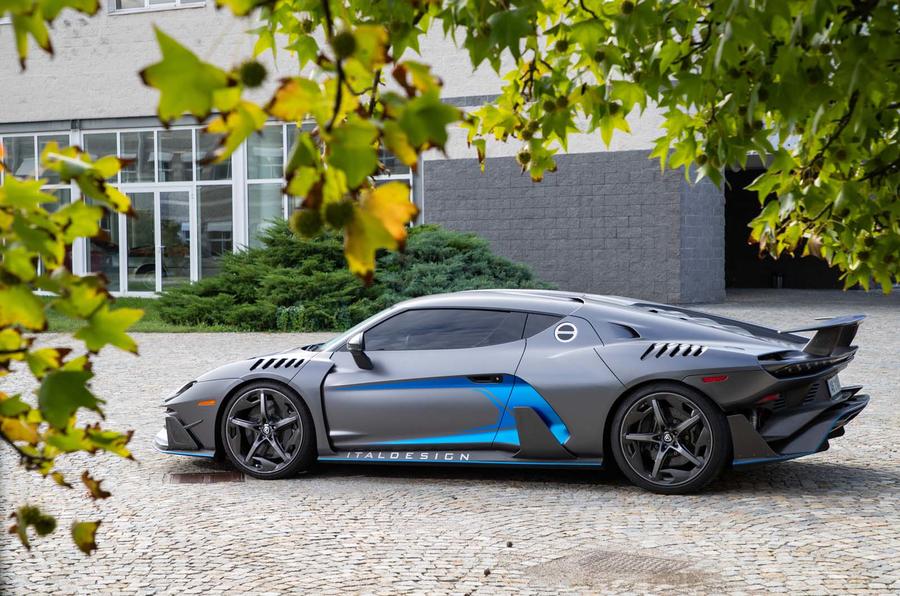 “Italdesign is doing work for only one of the VW brands currently,” says Astalosch, “and it isn’t Audi,” the group brand with direct responsibility for the company. Another automotive customer Astalosch can talk about is Nissan, which is very much not a part of VW. But the sharing of a 50-year anniversary between Italdesign and Nissan’s famous GT-R, and the creation of the skill-flaunting Zerouno, has led to a collaboration between the pair through the Japanese maker’s Bob Laishley, who is programme director for the GT-R.

Another trigger, says Astalosch, “was Italdesign employee Andrea Porta, who speaks Japanese and is a GT-R nut. We did a show car together and we’re hoping to get approval. Nissan will decide.” The show car is the 710bhp GT-R50 by Italdesign, the credit in the name suggested by Laishley, Astalosch tells us with pride. If it gets the go-ahead, there will be “a small series of 50 cars at €900,000 (plus taxes), although we’re not getting rich on it”. 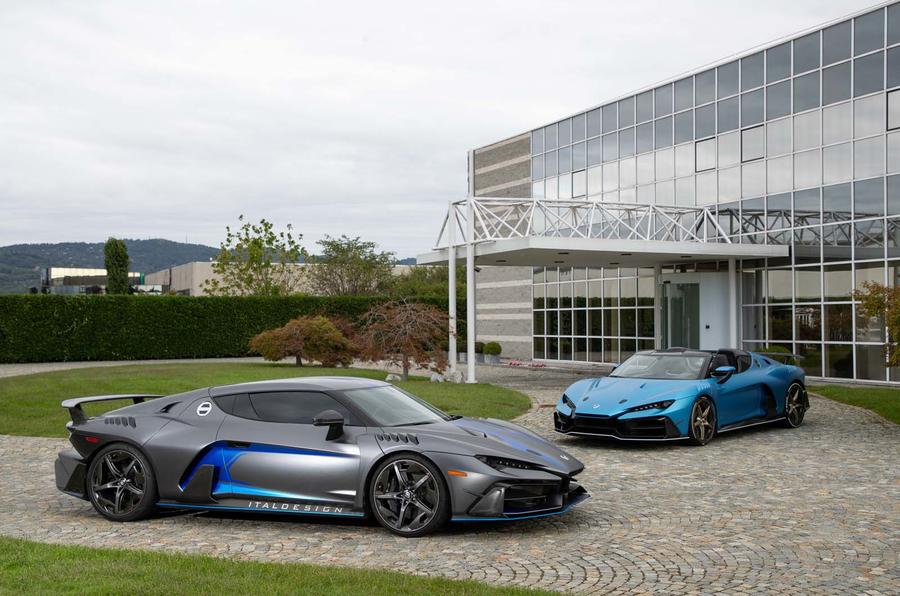 Nor is Italdesign getting rich on the Zerouno, adds Astalosch, despite the price of the five cars customers have paid to contribute to the project, which is about demonstrating three key company services. These include: “turnkey vehicle development in every form, ultra low volume series production (like the Zerouno and the GT-R50, if it happens) and the development of mobility systems”. Indeed, Italdesign is working on a Turin subway project as well as the extraordinary Pop.Up Next concept with Airbus and Audi, a vehicle whose detachable passenger pod can be lifted and carried by a four-rotor drone on demand.

That’s a long way from Giugiaro’s 1980 Fiat Panda, which Astalosch also considers to be a form of mobility system – his enthusiasm for the design prompting him to show your reporter low-mileage 4x4 versions for sale online, a purchase he’s considering. On the subject of total mobility systems, Astalosch reckons the car industry “has to look at this, otherwise there won’t be cars in the future”.

Drive the Zerouno, and you’re forcefully reminded what an experiential human loss this could be. It’s eruptively fast, of course, dramatically noisy, unhesitatingly responsive and rich with physical communication. It also feels terrifically well developed – its handling, ride, grip, drivability and aura of rigidity confirming the results of extensive testing that included the necessary homologation with the super-strict German TUV.

The car we’re driving is a prototype that obviously predates the five customer cars, but despite some unfinished areas including a crudely rigged gear selector and a prototype’s electrical cut-out, it feels confidently all of a piece. The finish of the Zerouno Duerta prototype, incidentally, is as accurate and robust as you’d hope of a design and engineering company demonstrating the talents of its 1000-odd employees. 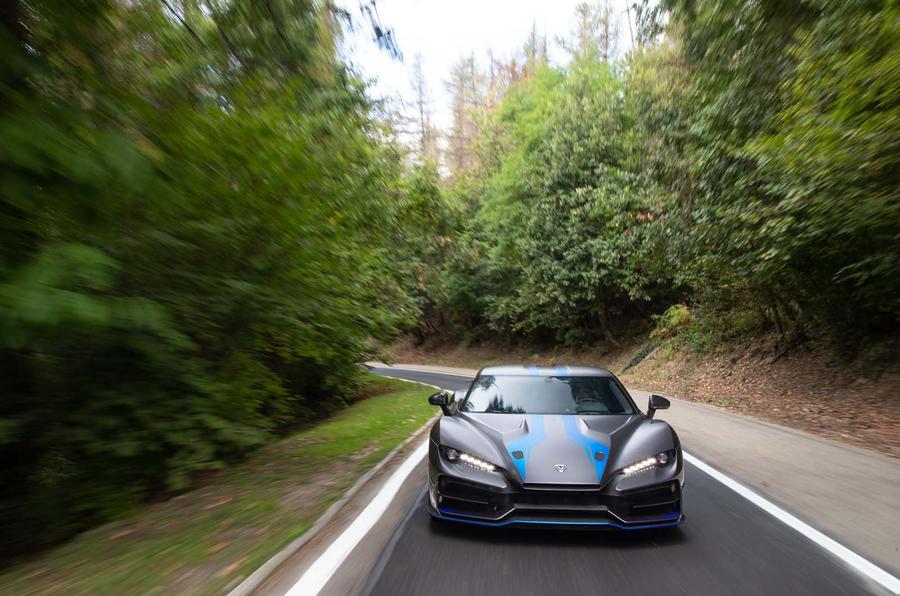 Given Audi’s ownership of Italdesign, it won’t surprise you to hear that there are major elements of R8 in its make-up. Which doesn’t much diminish the achievement of taking only 14 months to turn a June 2016 design sketch into a running car, thus demonstrating the speed of Italdesign’s development process.

The Zerouno is based around the aluminium core of Audi’s supercar, it’s propelled by an Audi Sport V10 engine and uses Audi’s quattro all-wheel-drive hardware. But it’s very much a vehicle in its own right, and one of considerably stronger flavour than an R8. The brief, says chief designer Filippo Perini, “was to design a car not overlapping with anybody else’s, with a look that was sexy and mean”.

The ‘sexy’ element from his statement stems from a roof 50mm lower than an R8’s, “with a sensuous upper section. The lower part is driven by aerodynamics.” As can be seen in the massive double-decker venturi system at the rear, the sill extensions and the bold ventilation slats in the wing tops, which exhaust air from the brakes. These elements constitute what Perini alludes to as ‘mean’, as does the part-exposure of the massive 305/30 ZR20 Pirellis at the rear. 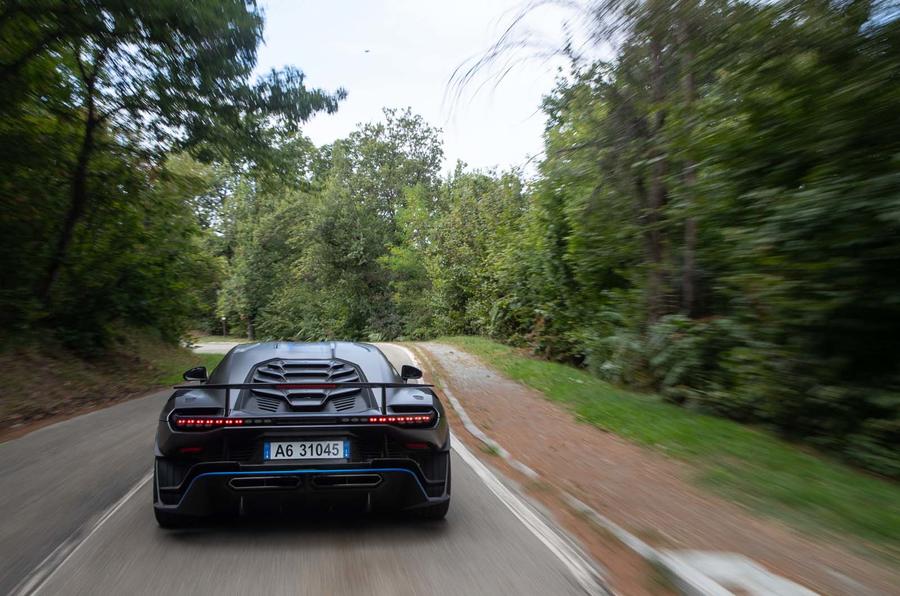 The front end presents a racer’s thrusting extended floor, above it a more subtle air intake deliberately redolent of single-seater race cars of the 1960s – the cooling air jetting from this slot via a pair of openings further up the bonnet. This Y-shaped channelling presses the Zerouno into the ground at speed, as do the titanium diffuser and carbon sill extensions.

You can feel the results on the road too, the car feeling wonderfully secure at speed, and not without delicacy either. This manifests itself in the ride, which while firm remains supple enough to provide satisfying feedback over rougher roads, and ensures decent comfort too.

Consider this aspect, plus the Zerouno’s pleasingly precise steering and the memorable impulsion delivered by 602bhp and 413lb ft of torque that bestows the car with amazing point-to-point speeds: the result is a whole heap of addictive entertainment. 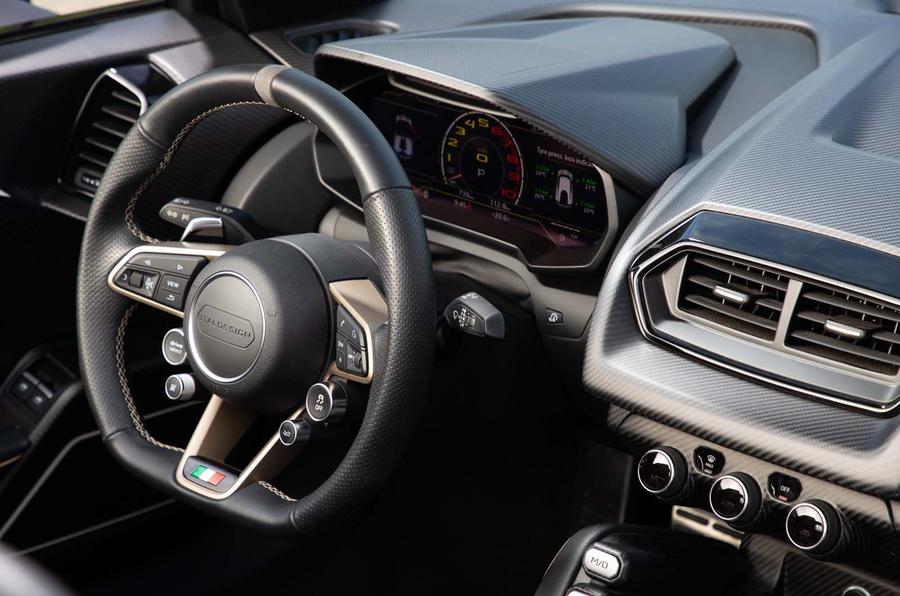 Its 5.2-litre V10 is normally aspirated, allowing precision reactions to the accelerator and some useful engine braking when you throttle off. Carbon-fibre body panels, a carbon section of an R8 spaceframe modified to lower the roof and various other weight-saving choices chop away around 100kg, to produce a 3.2sec sprint to 62mph and a 205mph top speed.

Despite such potency, this is a surprisingly easy car to drive – and to drive hard too. Its terrific grip, superb ceramic brakes, the excellent seven-speed paddleshift transmission and a great view out (forwards, if not behind) provide the Zerouno with an agility that belies its rather excessive footprint. It might be low but it’s also rather long and, like the R8 on which it’s based, too wide as well.

Still, this criticism pales against the seemingly crazy price, until you remind yourself that the Zerouno has sold out. Still more vitally for Italdesign is that this car is helping with its business-winning quest, not only through Nissan but with other non-VW manufacturers, perhaps never to be disclosed. It’s great to see Italdesign once again providing inspiration to the wider car industry.

Slideshow: the genius of Italdesign

The designer should have been fired.

There's nothing sensuous about this car, it's plain ugly.

The designer should have been fired

Why? they've all sold

Too concentrated on detail design than overall styling.

Not much better than the

Not much better than the Morris Marina Ital

which they didn't design..