BACK TO ALL NEWS
Currently reading: First drive: Nissan GT-R50 by Italdesign concept
UP NEXT
Ford backs call for European ban on new ICE cars from 2035

Celebrating 50 years of Datsun and Nissan performance cars, along with the 50th anniversary of famed design house Italdesign, the GT-R50 by Italdesign concept hints at a possible bespoke limited-run model, with 50 examples set to be produced at $1.3 million (£1m) each.

Driving a one-off concept is always a special experience and our first drive of the GT-R50 is no exception. The first thing that jumps out at you on approach to the car is the striking dual-colour scheme. Nissan calls it Liquid Kinetic Gray with Energetic Sigma Gold accents.

The design was a collaboration between Nissan’s in-house design teams in Europe and the US, with the engineering and final build handled by Italdesign. It is a fully road-legal car, a proof-of-production concept. The design starts with a 2018 Nissan GT-R Nismo that made its way from Japan to Turin, Italy, where it went from initial conception at the 2017 Geneva motor show to the hill climb at Goodwood in June this year. 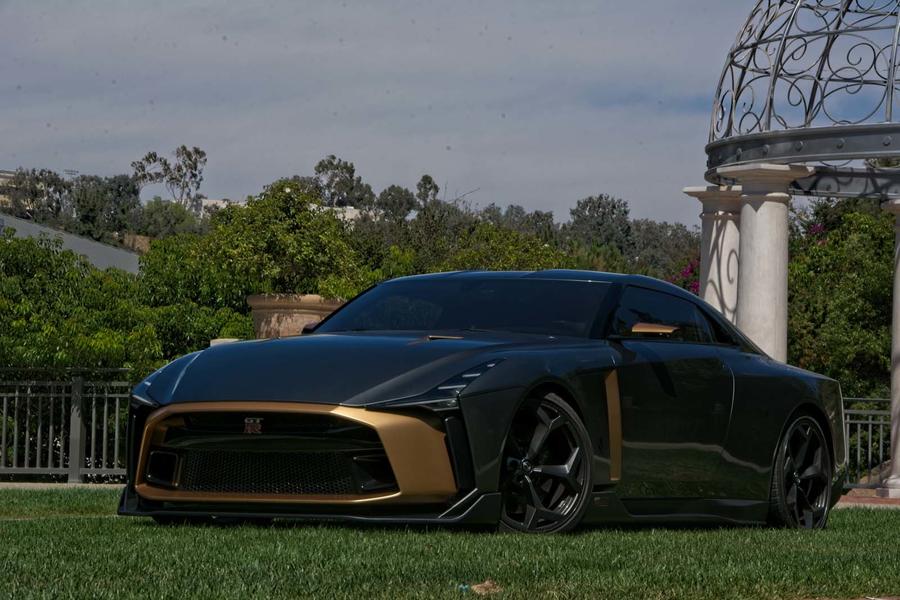 Following its appearance at Goodwood, the GT-R50 made a cameo appearance at Spa in Belgium before it was shipped to the US to be displayed during Monterey Car Week to gauge interest for a production version. Global product communications manager Neil Reeve says if Nissan finds 50 “hand-raisers" among the world’s elite car collectors, he’s optimistic that it can reach production in 2019. Next, the GT-R50 is headed to Japan, where potential buyers in Asia will be canvassed.

The exterior of the current GT-R is dominated by its front fascia. That gets toned down a bit in this version, but it is fashion-forward with its Energetic Sigma Gold accents. Looking at the car’s side profile view, something appears a bit different. That’s because the roof has been treated to a subtle 2.1in height drop. The car also features the most unique centre third brake light we've ever seen — a translucent fin on top of the roof that is hard to miss when the brakes are applied.

The rear quarters are dominated by the deck painted in Energetic Sigma Gold, while a new pop-up spoiler has been installed. We asked the representatives from Italdesign to raise the bonnet — something that's a two-person job. 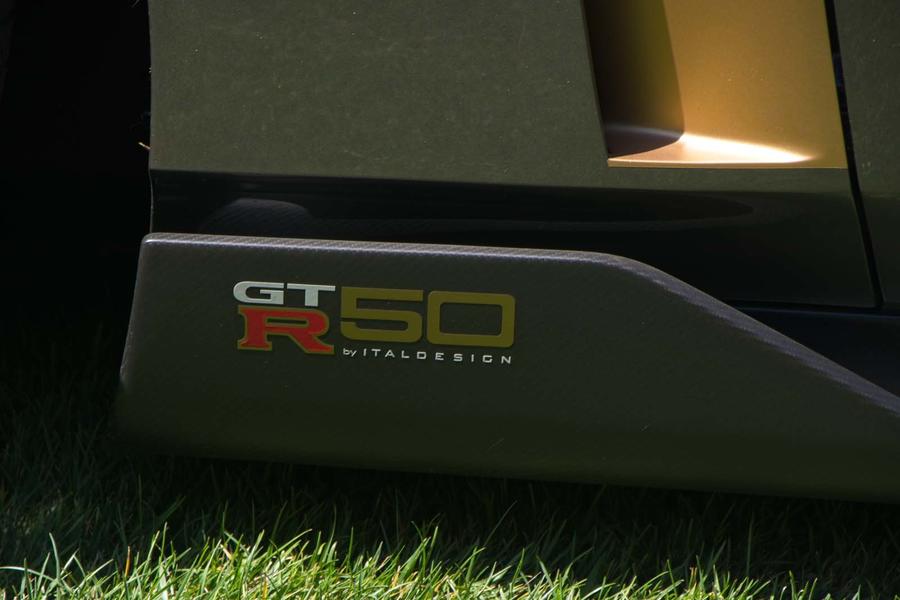 Speaking of the engine, output has been taken a bit beyond the production car’s 592bhp. Massaged by Nissan's performance tuning department, Nismo, the twin-turbo 3.8-litre V6 now boasts 700bhp and 575lb ft of torque.The upgrades include enlarged competition-spec turbochargers and intercoolers, a heavy-duty crankshaft and new pistons. The transmission remains a dual-clutch sequential six-speed, but with upgraded front and rear differentials.

The interior has been tweaked as well, but not to the same degree as the exterior. Higher-quality materials dominate, while the exterior’s gold accents are carried through. The biggest change? The car discards the GT-R’s instrument cluster, replacing it with a digital panel that would look at home in a racing car.

The racing-style bucket seats are sumptuously trimmed in leather and Alcantara, with carbonfibre almost everywhere you look. And unless you’re sitting inside the car, you would not know that the GT-R50 retains the production car’s plus-two occasional rear seats. The GT-R is hardly a run-of-the-mill place to sit, but this feels truly special.

It's scary, driving an essentially priceless concept car on public roads. And we found that out immediately, crawling out of the hotel driveway and hitting the front spoiler with a resounding crunch. Neil thankfully tells us we’re not the first ones to do that as we head out onto the streets around Agoura Hills, California.

The car drives with the heavy feel typical of its production counterpart. Visibility is understandably challenged due to the roof chop, but it’s not significantly worse than the GT-R you can buy from your local Nissan dealer. We won’t feel out of place saying that the car feels big; almost like a modern American muscle car, at just a fraction under 4.7 metres long. 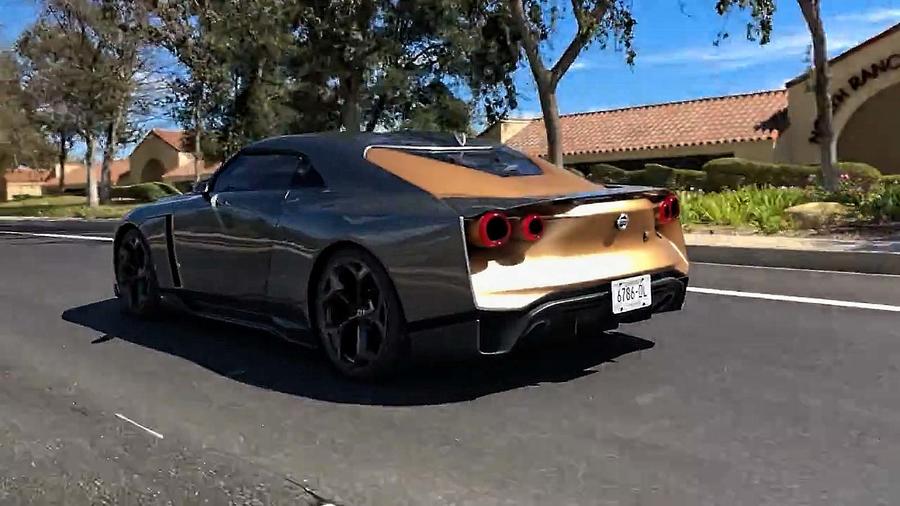 While we were driving, Neil explained how the car came about. Representatives of Italdesign spoke with Nissan at the 2017 Geneva motor show, then the decision was made to move forward with the idea of a dual celebration of the GT-R nameplate and Italdesign’s founding with the 1968 Bizzarrini Manta.

The GT-R50’s all-wheel drive gives it a sure-footedness that is the envy of almost any car currently in production. This is the signature component of the GT-R driving experience, alongside the astonishing straight-line performance and physics-defying handling. It’s tactile and, in a way, it’s communicated to the driver through this concept’s new instrument panel and upscale materials throughout the cabin. Does this justify the potential seven-figure price tag? Possibly not, but then this car will be so rare that it doesn’t need justifying.

For Nissan to make this work to satisfy the number crunchers, the GT-R50 simply must be priced at this level. In this regard, it’s like Aston Martin’s DB4 GT. When you build just 50 of something, with all the new tooling and fabrication involved, spread over so few a number of vehicles, it’s amazing that the GT-R50 is even being considered for production at all.

So, even with the nosebleed-level pricing, we suspect that the GT-R50, if the programme does get a green light, won’t be a profit churner by any stretch. Our short drive tells us that those fortunate 50 who could get one of these won’t get a significantly better car than the standard GT-R, but they will get something that’s the envy of any well-heeled collector around the globe.

First, this Car is not pretty, there’s too much detail, the Gold accents do it no favours in fact I go as far to say that Nissan UK dropped the Ball here by letting Uncle Buck have a say in how it looked, may sell them in the US even in the Emirates,but ho estly anyone with taste wouldn’t buy this, and the price..£1.3 million? Really!!!?, the other thing is if your into GTR’s you’ll buy one and take it to a guy with a Laptop and depends how big you man vegetables are you might have to change the internals but if not..a couple of hours later you’ve gotta Car with wa more power and torque for no where near the quoted price for this Medallion man Car...!

lovely combo of colours / finishes, front end looks great, but that elongated / droopy back end? or is it just the camera angles?