BACK TO ALL NEWS
Currently reading: Michelin announces airless tyre deal with General Motors
UP NEXT
Dear Tobias: How the new CEO can fix Aston Martin

An electric autonomous vehicle from General Motors (GM) is set to serve as the first production application of a revolutionary airless tyre that was unveiled this week by Michelin.

The Uptis – an acronym of Unique Puncture-proof Tyre System – is similar in concept but different in its composition to the airless Tweel, which was first shown in 2005 and subsequently made production on skid-steer loaders and lawnmowers. It was revealed at Michelin’s Movin’On sustainability conference in Montréal, Canada.

The tyre consists of a flexible spoke structure made from rubber and a patented new resin-infused fibreglass reinforcement. The flexible ring is wrapped in a conventional tyre tread that could eventually be ‘recharged’ from worn using 3D printing. Just like with a pneumatic tyre, the properties of both the tread and the structure can be tuned for different types of vehicles. 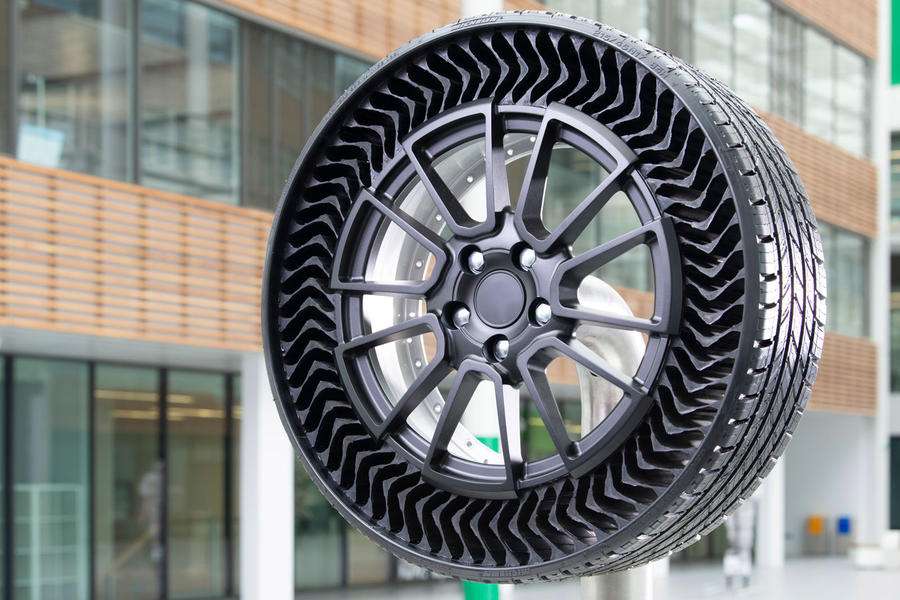 Michelin is working with multiple car makers to bring the Uptis prototype to full production. Engineers say there’s no reason why it couldn’t be fitted to anything from a light truck to a performance car, electric or combustion-engine powered.

The only partnership that’s been made public so far is with GM, which will fit the Uptis to a fleet of Chevrolet Bolt EVs for real-world testing. GM is eyeing the peace of mind provided by Uptis for future CASE (connected, autonomous, shared and electric) vehicles.

“It may fit exceptionally well into the fleet autonomous vehicles that we’re conceptualising right now,” Steven Kiefer, GM’s senior vice president of global purchasing and supply chain, told Autocar. “The Bolt EV provides the framework for our Bolt AV (autonomous vehicle), and we see a great opportunity to be relatively maintenance-free on fleets of autonomous vehicles.” 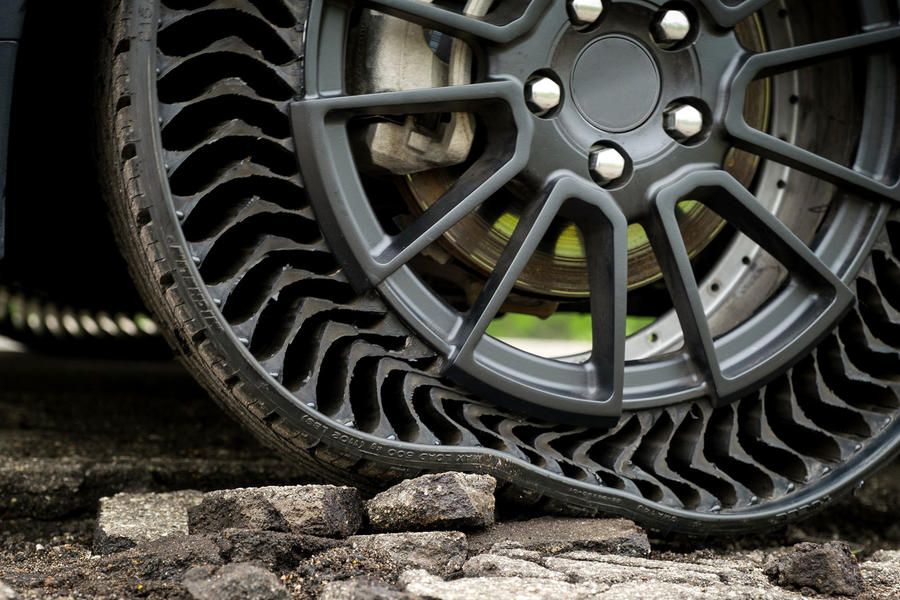 When the Uptis does reach production, expected to be in 2024, it will mark the first step towards Michelin achieving the goal of a fully sustainable tyre that was embodied in the Vision concept revealed two years ago. The French firm estimates that each year, some 200 million tyres worldwide are prematurely scrapped as a result of punctures, damage from road hazards or improper inflation that causes uneven wear.

Winter tyres: should I buy them?​

The future of motoring - what will cars be like in 25 years?

And curious whether you can leave a car for a month or so in the garage to go on vacation.

Saw something like this on YouTube a few years ago, at that time it was aimed at fork lifts and vehicles of that ilk, it looks good on a car Wheel, will it do away with Runflats? and of course what will they cost, I’d assume more than a Runflat for instance...?

May have an advantage in Hybrids which have space constraints and don't allow spare wheels but having said that I hope it fails as it'll give manufacturers the oppotunity to remove spare wheels altogether.

May have an advantage in Hybrids which have space constraints and don't allow spare wheels but having said that I hope it fails as it'll give manufacturers the oppotunity to remove spare wheels altogether.

How much heavier is this than a standard tire? I haven't read the statistic, but without the need for steel reinforcement and thick steel beads, it might not be that great. Nevertheless.. Unsprung mass and "feedback" (???) possibly aren't high priorities in electric vehicles. Or 4WDs. Or trucks. Or buses... Furthermore, the vehicle no longer needs to carry a spare or puncture kit, so that's a weight saving in itself.

How they perform in Winter is a question, will they not just fill with Snow and Ice?

I've a feeling this layout is to demonstrate the structure. Judging by the extreme deformation over rough terrain I'd worry about rocks and the odd hedgehog getting lodged in there!

Contrary to what you might believe, while they may be the most stylized of all truck and Jeep parts, wheels aren't all about adding glitz and shine. In fact, choosing wheels deserves lengthy consideration, as the right set of wheels can provide additional performance benefits that make buying them not just a stylistic decision, but a smart one as well. Try location 4x4 Canada and Thanks for sharing!