BACK TO ALL NEWS
Currently reading: Britain's most controversial car dealer: Tom Hartley on selling supercars
UP NEXT
GSR2: The new rules making cars safer but more expensive

Two days ago, a text arrived from Tom Hartley’s personal assistant, Hannah, asking what filling I’d like in my sandwiches. Attention to detail: that’s Hartley. It has been a while.

Eighteen years back, I took Hartley, probably the world’s most famous peddler of supercars, to the Geneva motor show. If your memory is better than mine, you might recall the resulting feature. Hartley brought his son Carl, who was 13 then and is now a full partner in the business. But more about the family later.

We’re at Hartley’s establishment in Overseal, near Swadlincote, Derbyshire, for a couple of reasons. First, Hartley wants to show off his recently completed new showroom. Second, he wants to talk about his new autobiography, The Dealmaker.

Establishment isn’t the official description; Hartley refers to the place as The Hartley Estate. Quite a place it is, too. Visits are strictly by appointment only, and if you did think about turning up at two in the morning to help yourself to the McLaren P1 that’s currently in the front of the showroom (alongside a huge selection of other exotica), you will have to crack a formidable security system. 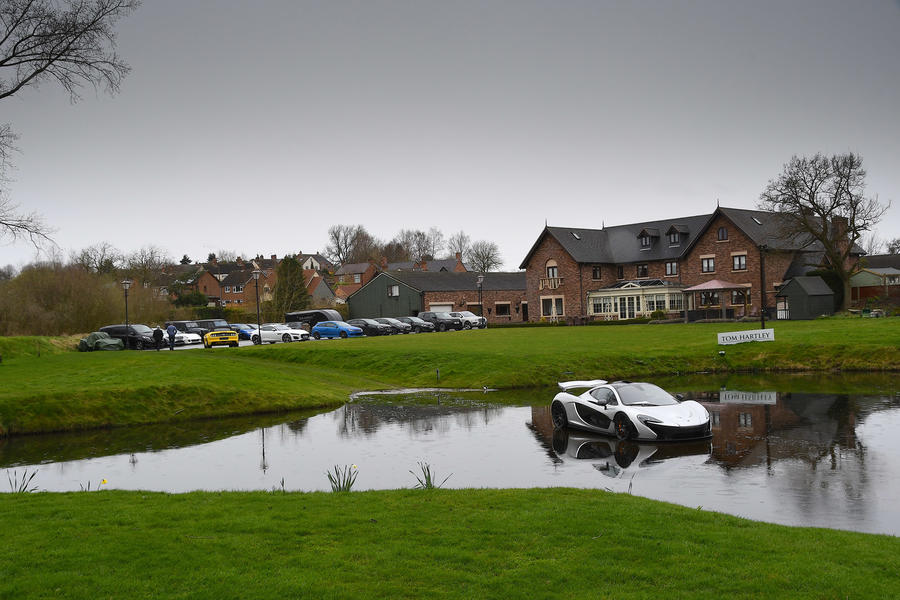 Your other problem is that Hartley not only lives on the estate – in a very grand gaff in the middle of it – but also doesn’t sleep much, so you’re likely to be caught red-handed. While you and I are in the land of Nod, the hyperactive 59-year-old Glaswegian will most likely be cutting a deal. Deals deals deals.

If you read his book, you’ll be up to your neck in deals. And celebrities. And money. The book was ghost-written by fellow hack and ex-Sun motoring scribe Ken Gibson. In parts it’s an excellent manual for the budding entrepreneur, with plenty of advice and inspiration, in others a masterclass in self-obsession. It’s interesting to discover that among Hartley’s business heroes are Philip Green and Mike Ashley (of BHS and Sports Direct respectively) and that he considers Donald Trump a genius.

In the book, Hartley notes that he likes characters rather than bland people, citing fellow car dealers Nick Lancaster and Ron Stratton as falling into the first group. He’s right about Lancaster: I have about a hundred hilarious anecdotes involving him, so it’s a bit of a shame that Hartley, who has known him for longer than I have, didn’t commit a few to paper.

While Hartley might not come across as your cup of char in this book, he’s very dynamic and likeable in the flesh. And if you’re into cars, and particularly very fast ones, he’s absolutely fascinating. I doubt there’s anyone in the world who has a better knowledge of this market or, more importantly, a more comprehensive address book containing the names of those who play in it. But before we question the oracle on such pressing subjects as the sales potential of the Lotus Evija, let’s take a tour around and kick some tyres. 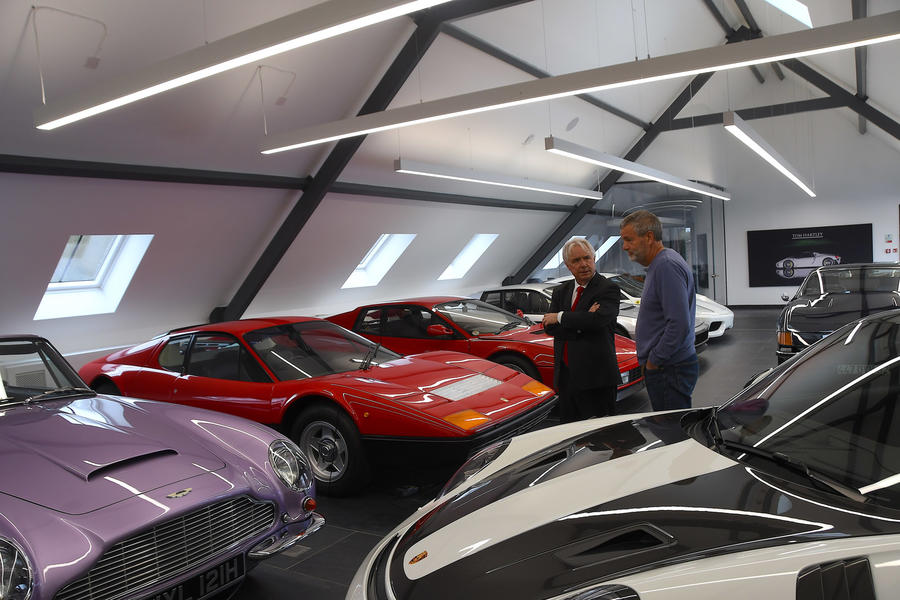 Hartley is rightly proud of his new showroom. The old one still exists; it’s where his original office is and from where he still works. Carl has an office in the new place with plenty of computer screens and tech on show, while Dad’s is an old-school leather-topped desk with a phone on it. For doing deals. In case you’ve never read anything about Hartley in the media, he’s had his office walls covered in old articles and features concerning him, including the one that I wrote.

The new showroom is stunning. It’s across three floors, all of which are serviced by a car lift. The top one has a balcony so that cars can be out in the open. The ground floor contains Carl and chief salesman James’s office. There’s a big glass panel on the floor so you can, if you want to, go down to the basement and survey the underbelly of your prospective purchase. The glass had been occupied by a nearly new Porsche 911 Targa, but that has just been collected by its new owner: the wife of a successful East End builder who last week made the trip north to collect his own Lamborghini Aventador SV. Hartley did 500 deals last year, mostly with private buyers but also some within the trade.

Now the sheet of glass is covered by the P1. There’s a Bugatti Veyron next to it, several more Lamborghinis and, on the other side of the showroom, a Porsche 918 Spyder and Carrera GT.

I love Lamborghinis and the straight-forward people who tend to buy them. Like that most famous of Lambo owners, Rod Stewart.

“I know what you mean,” says Hartley. “I’ve sold Stewart several cars. He used to live in Epping Forest but now he’s up near Harlow. One time, I had to drop off a car at Elton John’s house in Berkshire and then go on to Rod’s to collect one.” Some address book.

As well as the P1, there’s a McLaren 720S and a new McLaren GT. “I’ll never drive a McLaren again,” says Hartley with some feeling. “I suffer from claustrophobia and once got stuck in one because the central locking failed. I nearly had to bash my way out of the thing but fortunately was rescued. They’re not at all well made, and then there’s the depreciation. That 720S was about £240,000, but you could take it away now with fewer than 5000 miles on the clock for £150,000.” 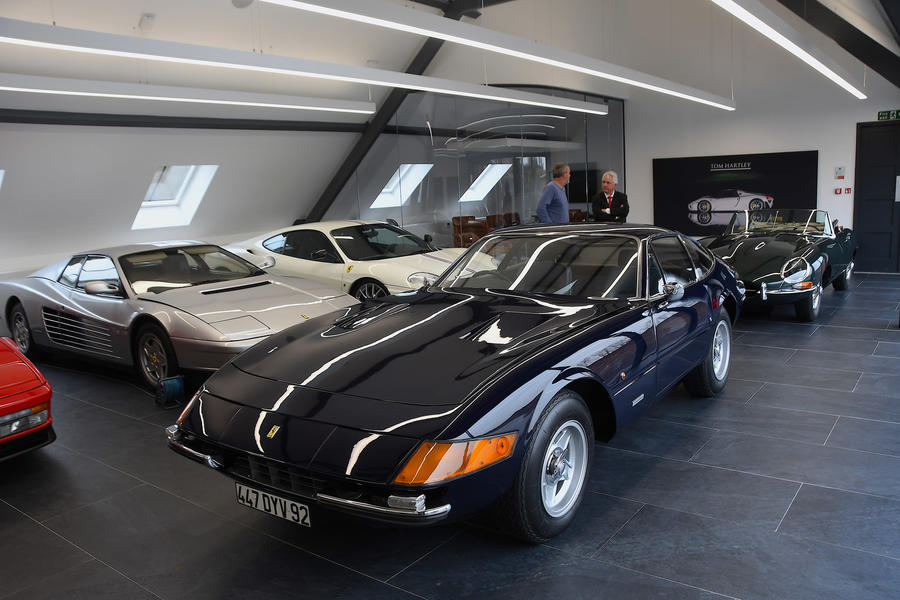 The Evija was mentioned earlier. I remember from when we trod the boards at Geneva that Hartley didn’t hold Lotus in especially high regard.

“The problem,” he explains, “is that, as a brand, it simply isn’t on the same level as Porsche or Ferrari. Selling a million-pound-plus Lotus isn’t going to be an easy job.”

So what does the man who has the most amazing key box in the world drive? “I’ve got a diesel Volkswagen Golf,” is the answer. “It’s a great little car. I do of course drive lots of supercars, but the reason I drive the Golf is that I don’t want to lose the special feeling that you get when you drive a supercar. I don’t want to become blasé about them. I need to feel what the customers feels.”

By his own admission, Hartley isn’t a petrolhead, even though his knowledge is certainly prodigious. For a chat with a proper enthusiast, you need to buttonhole Carl.

The boy has turned out well. As covered in his book, Hartley, who left school at 11 himself, home-schooled both his sons and both his daughters. When I met Carl in 2002, I found the experience rather unnerving. A young version of Dad, in a sharp suit, very earnest and very controlled. I couldn’t imagine that he would grow up to be a normal person. He has – and we can bond over cars, too. 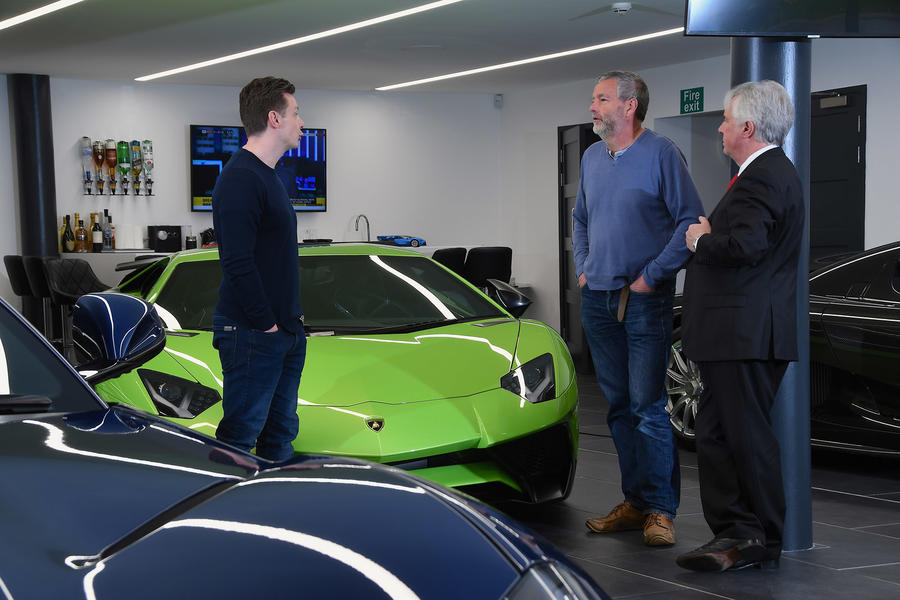 “What about electric supercars?” I ask. “Not for me,” is the emphatic reply. “That’s as far as I’ll go,” he says, pointing at the hybrid P1. “Not pure EV, because the engine is the soul.”

Carl’s brother, Tom Junior, worked with the old man until 2014, when he left to start his own eponymous business, which tends to specialise in classic cars. Top-end ones, of course. There are a few old-timers knocking around Hartley Senior’s premises, too: a Lamborghini Jalpa hiding in a corner, plus a Ferrari Daytona and a flat-floor Jaguar E-Type on the top level. Both are immaculate, but the Daytona is just sensational in dark blue. It’s my pick of the stock.

A rather more affordable Ferrari is a mint-condition 458 Spider. “These are interesting,” notes Hartley, “because they’re worth more than the 488, as people prefer the naturally aspirated engine.”

This is what makes him so interesting: his deep knowledge and, because his business isn’t a franchise, his willingness to speak his mind. Witness his views on McLaren. He’s not shy about Ferrari, either.

“They’ve started taking the piss out of customers,” he rails, “with cars like the 488 Pista, which it charges a fortune for but which isn’t really that different [from the regular 488 GTB].

“Also the way that you have to buy several ‘ordinary’ models like the 812 Superfast and Ferrari Portofino to get yourself on the list for the more exclusive stuff. Eventually, they’ll come unstuck doing this.”

Hartley tends to own all his stock; there are no big loans with the bank. Everything you see has been hard-earned and paid for. This is going to put Hartley in a better position post-pandemic than many of his rivals.

“I’ve been through several recessions,” he notes, “so I know what to expect. I know I’m going to lose a seven-figure sum on this stock, but I’m well placed to deal with it.”

I don’t doubt it. Hartley’s combination of self-belief, experience and sound business acumen should get him through even this steadily tumultuous economic storm.

Lamborghini posts best ever sales for 2019

And that he sees no appeal in very fast electric cars.

You guys crack me up

Ever heard of Twitter?
An ideal platform to air personal opinions...
Deputy 27 April 2020

Anyone who mentions Green, Ashley and Trump as their heroes (just look at the dodgy dealings they have all done) will not be getting my money when I want to cash in my pension pot and get a retirement toy.  I used to quite like the Tom Hartley website and approach until I read this article!!