BACK TO ALL NEWS
Currently reading: The supercar graveyard: where Ferraris and Lamborghinis go to die
UP NEXT
Why now is the time to buy a proper high-mileage hero

It’s sad when exotic cars end up in a breakers’ yard, but we meet a man who gives them a life after death
Open gallery
Close

Worth to earth, crashes to ashes, lust to dust… With apologies to the Order for the Burial of the Dead, I ponder the skeletal remains of a Lamborghini Jalpa perched on top of a large metal container at car breaker Eurospares in Essex.

It’s a moving sight awaiting anyone who wanders around the back of the firm’s nerve centre, located in a bustling industrial estate just outside Halstead, near Colchester. However, there’s worse – much worse – inside one of Eurospares’ seven vast storage buildings.

On racks, and looking just like a child’s toy car collection, are the shells of six gorgeous Italian sports cars – three Ferrari 308 GT4s, a 348, a 458 and one Lamborghini. On the floor below, and to the side, is a Ferrari 599 GTB minus its wheels, windows, interior and most of its bodywork. A few mountings are all that remain of its V12. 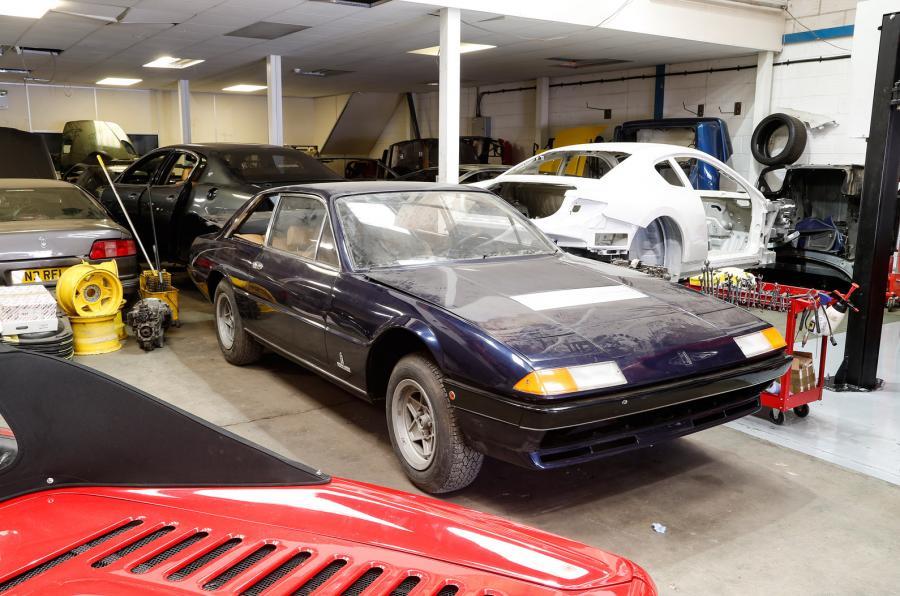 Nearby stands a deformed Ferrari 612 Scaglietti with half a side missing, a brace of Maserati GTs – although owing to huge impact damage, barely recognisable as such – and a 458 reduced to its roof.

I need a stiff drink. James Pumo, owner of Eurospares, offers me an espresso, before telling me his story.

“My dad was a hairdresser,” he says. I scan the room for bits of Mazda MX-5. “He had a couple of salons in Manchester and used to go back to Italy to buy his hairdryers. One day a Ferrari dealer asked him if he’d pick up some spares from the factory on his next trip. Dad quickly realised that, with his Italian contacts, he could make a business supplying parts for Ferrari and Lamborghinis, which is how we started.”

Although Eurospares salvages lots of parts from the sports cars that it breaks (in the past 10 years, hundreds of Ferraris but only 15 Lamborghinis), many are new items bought from bankrupt dealers and garages – following the 2008 economic crash, the Middle East was a rich source – as well as remanufactured components from a web of global suppliers.

Faster, more agile and perhaps more authentically ‘Ferrari’, but like its predecessor, the Portofino lacks the dynamic sophistication of a great GT car 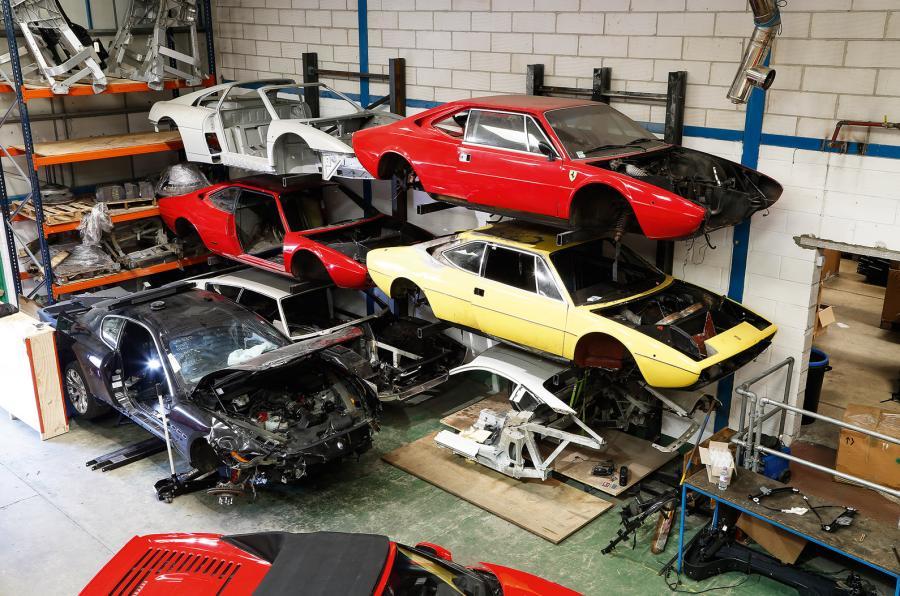 “If a part is no longer available, and there is sufficient demand, we’ll have it made,” says Pumo. “For example, I’m stuck for Ferrari F40 steering wheels at the moment, so I said to Momo: ‘Let’s make 100 of them’.”

I want to talk about his stripped-out 599. “It was flooded in a car park along the coast in Brightlingsea,” he says. “The water came right up to the windows. The engine was wrecked. We took it out, put a glass top on it and put it in reception.”

In another of Eurospares’ huge storage buildings is a rack of salvaged and reconditioned engines, including three Ferrari Testarossa flat 12s (worth around £14,000 each) and a V8 from an F40 (£114,000). There are also Ferrari engines from 360s, Mondials, a 456 GT and an F430. On the floor is a small cluster of Lamborghini engines, including one from a Murciélago (£27,600).

“People want them for parts or occasionally we may sell them whole,” says Pumo. “A whole engine is often the last thing they need, though. Crash repairs and restoration is where the market is. Engines tend to be looked after.”

Wheels, windscreens and panels are Eurospares’ biggest movers, as well as anything for the front end, where most crash damage occurs. For example, the deformed 612 Scaglietti has donated its wings and front panel to a crashed car. 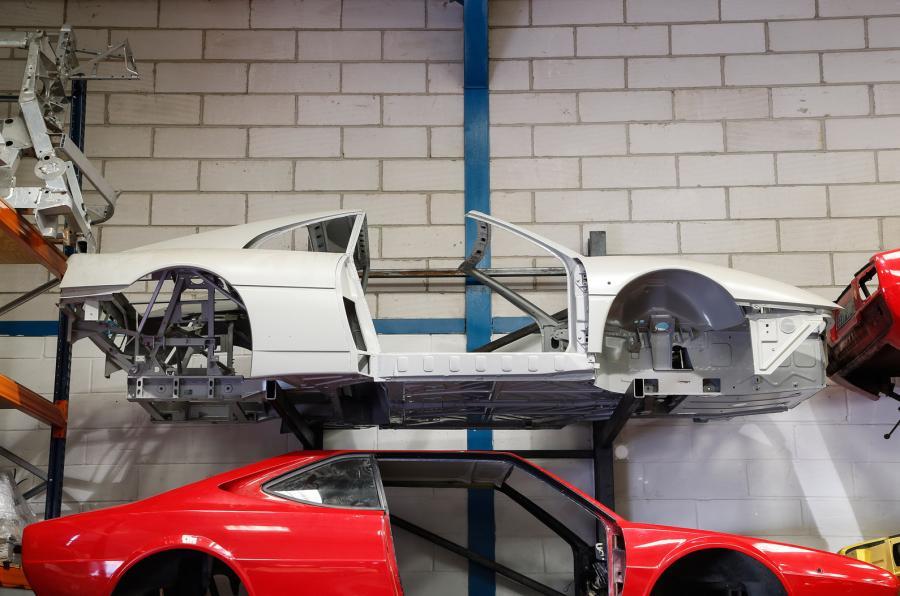 Pumo claims his used parts are about half the price of their new equivalents. You’ll still need deep pockets, though. He points to the front end of a Ferrari Daytona perched on a shelf high above us: “That’s £8000,” he says, simply. A flimsy strip of aluminium on the back of the 458’s shell that is a little longer than a 12in ruler and about as wide is worth £1000.

“There’s often little relationship between the appearance of a part and its value,” he says. “We’d lose a lot of money if we didn’t know what every bit of this stuff is worth.”

The Eurospares team studies car and parts prices daily to see where the market is. It’s not unusual for people to buy parts from the company at a low price and hoard them in the hope their value will rise, just like the cars they were made for.

“Everything is being restored these days,” says Pumo. “Not only are the prices of the cars going up; the prices of their parts are, too, and we have to watch them closely or we’ll lose out.”

Of course, Eurospares is not the only player in the game. For example, Ferrari itself provides parts for cars up to 10 years old through its dealer network. Beyond that age, supply is managed by Maranello Classic Parts in Egham, Surrey, which also has the right to remanufacture parts. Ferrari’s own Classiche department can make parts for seriously old cars that it is restoring for customers. 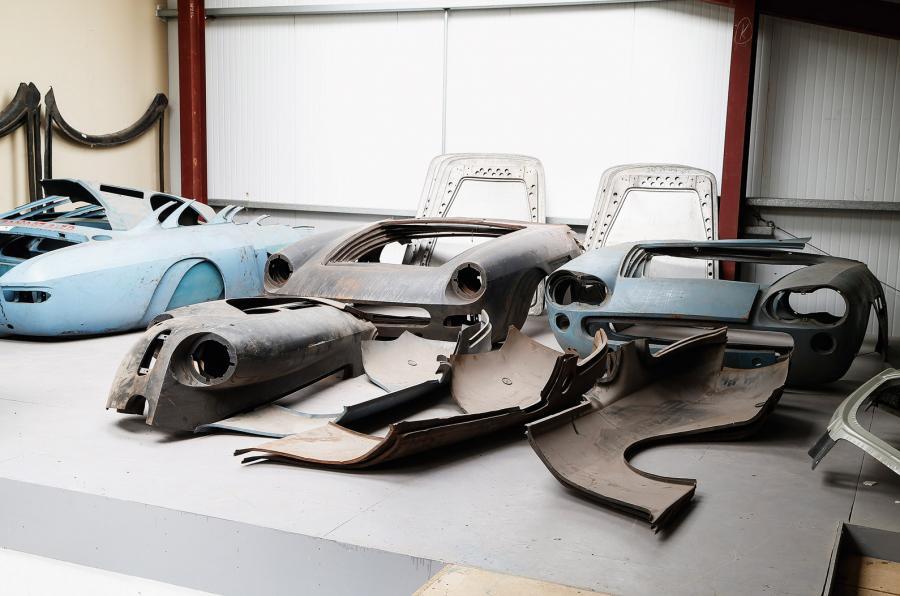 Although he drives a Ferrari F12 Berlinetta, Pumo is unsentimental about the cars he strips. Occasionally, he’ll take a call from someone who is upset about a Ferrari he’s advertising that looks roadworthy but is being broken for spares.

“I’ve seen too many people go mad restoring these things to get that attached to them,” he says. “One old chap had spent three years rebuilding a 308. He wired the alternator the wrong way and when he started it, it went up in flames. When he rang me to take it away, he was suicidal.”

Not that Pumo is entirely without a heart. He regrets breaking the Maserati Ghibli SS that he bought for £10,000 from a gent in Cornwall in 2002, and the right-hand-drive Lamborghini Countach 5000 QV that he broke in 2003. “They could have been my pension,” he says, between sips of espresso.

Apart from the vehicle store, pretty much every square inch of space in Eurospares’ remaining six buildings is given over to rack upon rack of parts, almost all of them neatly labelled with a unique code. Pumo admits that he suffers OCD.

“I couldn’t run this place without it,” he says. “That, and nerves of steel. It’s the long game. All this stuff in here is worth millions and we’ll be sitting on it for years before it all sells.”

He leaves me to wander among the racks. I pass rows of beautifully enscribed Dino wheelcaps, boxes of switches, new and unvarnished wooden fascia panels still in their greased paper wrapping, boxes of old black cartridge players from a time before even cassettes were invented, bonnet releases, dusty temperature sliders, bright chrome bumper corners…

To the untutored eye, they’re just a jumble of odd bits and pieces, but to Pumo and his team they’re worth money – and if they get it right, lots of it.

Drive before you die: revisiting the Ferrari F40

It's all in the detail: Autocar's favourite car parts​

I thought this was a good

I thought this was a good article,I watch a lot of these US car remod shows on TV and there are lots of them.Even in Canada there are amazing little shops where you would least expect them, dealing with all sorts of mods and restorations, UK is of course the same, but NONE of them reveal HOW EXPENSIVE it is.Nostalgic it may be, but nothing will compare to the newest model you can buy, such is the huge progress in even 10 years [thinking of my own cars, not even my children's']

What an interesting place, makes you wonder why you'd pay Garage prices if you can get a salvaged part.

What an interesting place, makes you wonder why you'd pay Garage prices if you can get a salvaged part.

Perhaps the same reason in general that you wouldn't put part worn tyres on your wheels...would you do that also?.

What an interesting place, makes you wonder why you'd pay Garage prices if you can get a salvaged part. Of course you wouldn't use part worn Tyres, but, these parts should be puka.

Perhaps the same reason in general that you wouldn't put part worn tyres on your wheels...would you do that also?.

Why wouldn't I? I even applied the same principle when getting married :) :)

Why wouldn't I? I even applied the same principle when getting married :) :)

Indeed you would, not wholly surprising to those who have consumed your posts with such unbridled pleasure...another quality that you possess in spades...loyalty, still whoever the unlucky chap is, he has made the ultimate sacrifice, by marrying you, he has ensured that you don't make anyone elses life something of a trial.