The Classic Works headquarters in Coventry is dedicated to restoring, maintaining and selling the firm's older vehicles
Open gallery
Close

Jaguar Land Rover has opened a new £7million Classic Works headquarters in Coventry, which it describes as “the heart and soul” of its fast-growing global business restoring, maintaining and selling older vehicles.

The opening marks the 60th anniversary of a history-making domination by the Jaguar D-type of the classic Le Mans 24-hour race, which scored first, second, third, fourth and sixth places in the 1957 running of the classic. In all, Jaguar has won Le Mans seven times, the first victory in 1951.

The new Classic Works facility, the largest of its type in the world at 150,000 sq ft, is situated close to JLR’s recently opened SVO base, which upgrades latest models to customers’ requirements. Classic Works will be supported later this summer by the opening of another new classic cars facility in Essen, Germany.

JLR launched its classic cars business a little over a year ago, initially using facilities inside the old Browns Lane factory, from which it has already produced a limited run of “continuation” Lightweight E-Types. It is now beginning a similar run of nine XKSS models. 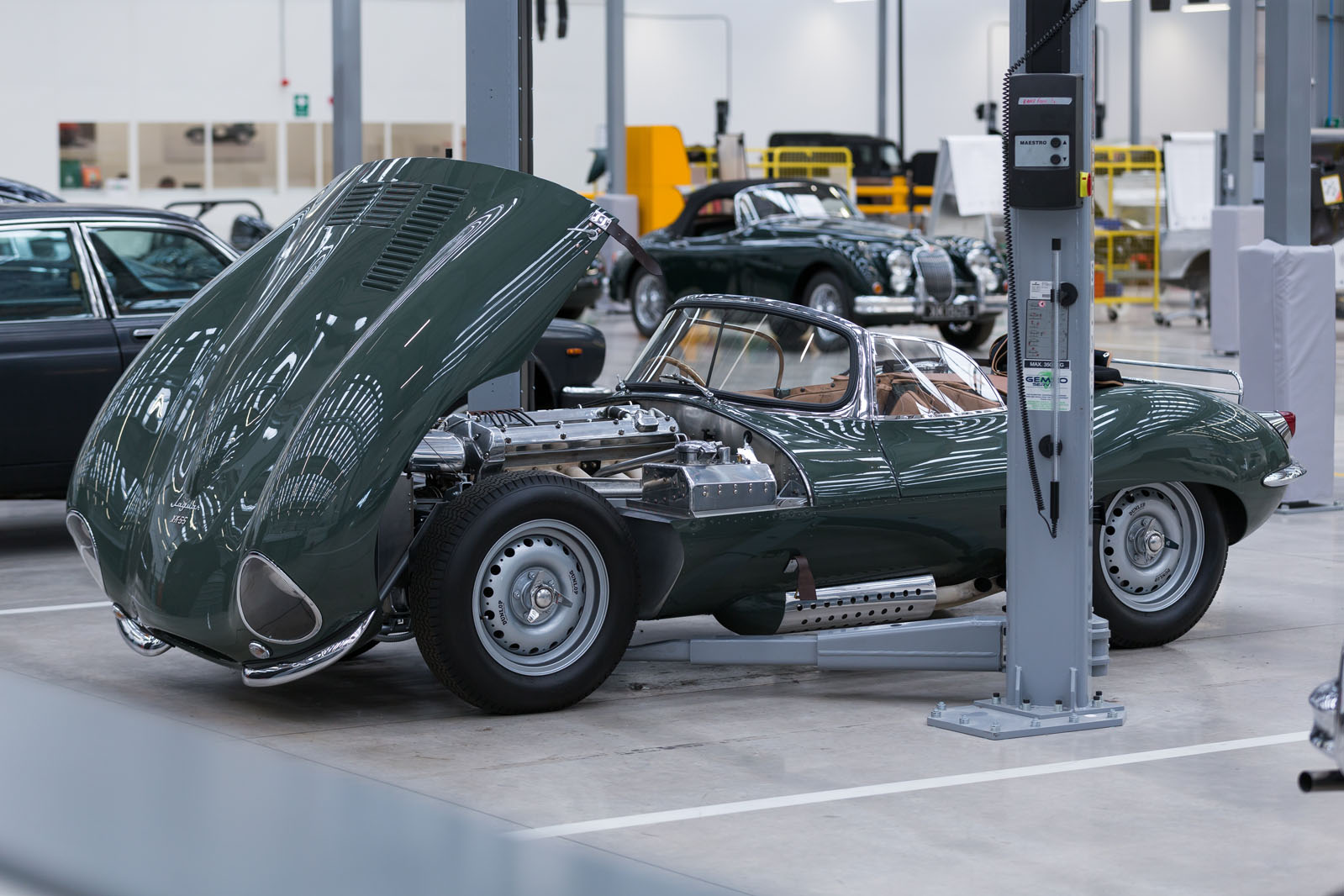 Director Tim Hannig describes Classic Works’ core mission as being to improve, restore and support older Jaguars and Land Rovers, and to find and restore vehicles it subsequently sells to new owners under a Reborn Legends programme. Last year Hannig announced a plan to rebuild Land Rover Series 1 and two-door Range Rover models for sale, and expanded his offering this year to embrace an initial batch of 10 Series 1 E-type Jaguars.

Classic Works also accepts commissions for improving or completely restoring cars, and supports these activities by offering a range of spares (more than 30,000 items so far) and services. It also offers repair and maintenance of models out of production for 10 years or longer; any car that arrives at Classic Works for the first time gets a 121-point plan. Guided tours of the new Coventry workshops will be offered from September.

“Classic Works is hugely important to Jaguar Land Rover,” says Special Operations MD John Edwards. “It’s much more than a building. It is the heart and soul of Jaguar Land Rover Classic for our clients worldwide.

Far more common, but far more capable than the Series I, the II and IIA maintain and even enhance the vintage looks of the original. But they suffered badly from chassis rot, so it’s hard to find an unmolested example.

Based on the Range Rover of the '80s, the Disco combined relative modernity with unparalleled comfort and visibility, and classic styling. Often seen as better and more desirable than the Series 2, and getting rarer, especially 3dr models

Fair to say this bargain-priced RR won’t attract Classic Works just yet, not least because of complexity and a reputation for unreliability. But good examples offer great comfort and value, and problem fixes are now available. Its day will come.

The cheapest secondhand V12 car in history is already rising in value as classic car lovers focus on its enduring value for money. Looks don’t please everyone, but the refinement and performance are still surprising. Ignore the fuel consumption!

Another top value option, plentiful and fast but not greatly valued at present. Looks, inside and out, improve with age and modern-era mechanicals mean the car copes with modern roads and conditions very well. Another sleeper.

Le Mans winner Andy Wallace, leader of the three-man team that took XJR-9 to Jaguar’s sixth Le Mans win in 1988, is joining Classic Works as chief test driver, tasked with signing off every one of Classic Works’ Legends Reborn and Legends Continued cars before they’re delivered to their new owners. He will also offer expert driving tuition to the new owners.

Wallace has had a close relationship with Jaguar since he, Johnny Dumfries and Jan Lammers stood on the top step at Le Mans 29 years ago, in particular playing an important part of the XJ220 supercar, a model in which Classic Works will specialize.

Later this month, Wallace will feature in a convoy of five D-types (including several 1957 race cars) that will run from Classic Works’ new Coventry HQ to Hampton Court Palace, site of this year’s Concourse of Elegance, taking in the Silverstone HQ of the Panasonic Jaguar Racing Formula E team.

Comment: Should Jaguar create new legends instead of restoring old ones?

I want to visit this

I want to visit this headquarters, and I'll be doing that soon. I am just confused as to whether I should play online pokies or not. If you don't know what that is, see here and learn more about it. I would appreciate that a lot, my friend.

I'm sorry but this reminds me of photos you see of some Chinese factories - full of shiny brand new equipment but no parts/work in progress. Repairing classic cars is a messy dirty business and this looks too dressed?
Muhammad 15 June 2017

This really is a fantastic effort by JLR. I would like to see Ford come up with something like this.
View all comments (4)