Where we're going, we don't need roads; these ten 4x4s are capable on just about any surface
Close
by Autocar
Follow @@autocar

Creating a definitive list of the ‘best’ off-roaders is something of a fool’s errand (although, as you can see, that hasn’t stopped us from trying). Even if you pin down the basic parameters for comparison – breakover angles, wheel travel, wading depth, cost and so on – the problem becomes one of environment.

Some of these vehicles are designed to crawl up boulder-strewn slopes where one crimped brake line will bring an abrupt halt to activities. Others are designed to bomb across loose surfaces at heroic speed, and in a manner entirely at odds with the cars whose incredible traction will haul them across impossibly slippery terrain at no more than walking pace.

Jeep doesn’t revitalise the Wrangler very often, but the latest generation is more useable than ever on the road as well as more capable off it. That Jeep has carefully preserved the much-loved design – whose circular headlights, slatted grille and strict geometry are recognisable still from the original Willys MB jeeps first deployed in World War II – is only part of the appeal. The interior is now more spacious and less cheaply- and sparsely finished, which goes hand-in-hand with the improved efficiency of the car’s downsized engines and better road manners (everything is relative, mind).

Of course, the Wrangler is still spectacular off the beaten track, especially in three-door Rubicon trim with its locking differentials, knobbly tyres, specialised axles, underbody bracing, and outstanding approach and departure angle statistics. For expeditions in true wilderness, the Jeep should top your hit-list. 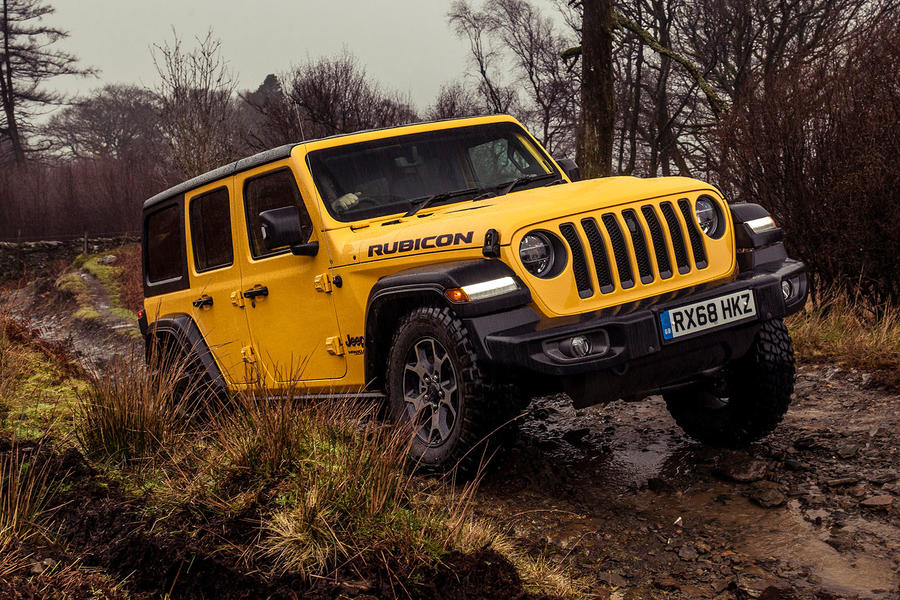 Save money with new Wrangler deals from What Car?

Another icon – one that has historically been the workhorse of choice in the Australian Outback, a place where breaking down simply won’t do. This is an old-school off-roader with a body-on-frame construction and big numbers in all departments. For towing, wading and low-ratio, grind-it-out driving across truly inhospitable ground, the Land Cruiser scores very highly, and basic-spec Utility versions, identifiable by their steel wheels, are genuinely affordable.

But while you can choose the 2.8-litre turbodiesel Toyota with air suspension and leather seats, don’t expect it to ride and handle like a monocoque SUV from Audi or Mercedes-Benz. It’s a different beast; less sophisticated on the M40 but in another league in places where you might actually need a car like this, with a reputation for mechanical dependability so jealously regarded by every one of its competitors. 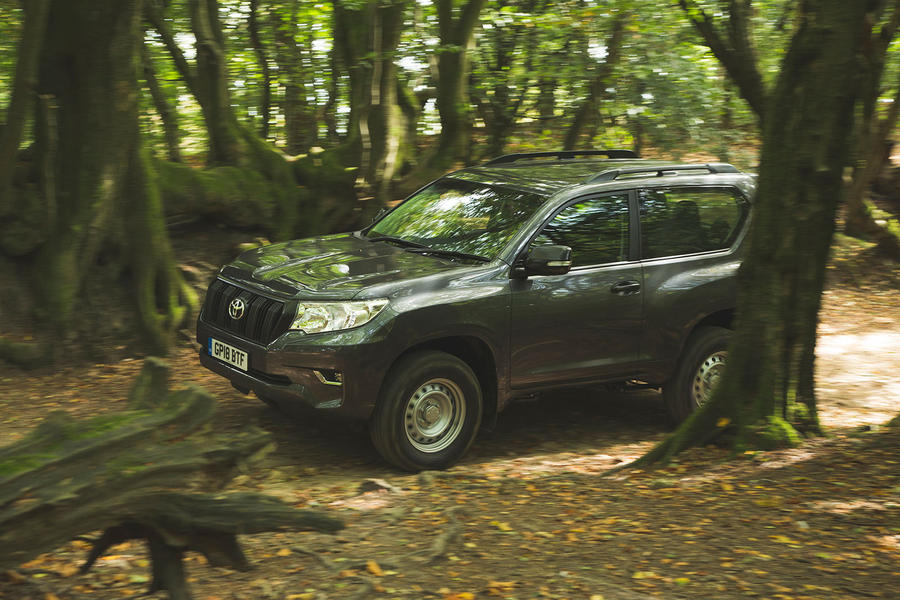 Save money with new Land Cruiser deals from What Car?

The best off-roaders tend to stick around. Both the Wrangler and the Land Cruiser have been with us for decades, and it’s the same with the G-Wagen (technically now the G-Class, but you’ll forgive us the nostalgia).

This Mercedes – the only one without an official ‘end of production’ date – recently received the only truly substantial redesign in its 40-year history. Underneath, you’ll still find a ladder-frame chassis, although the front suspension is now fully independent and the whole set-up was part-developed by AMG. The result is car with locking differentials, improved ground clearance and same immense off-road abilities as before, but now also one that handles predictably and, at times, even quite enjoyably on the road too. A move to rack-and-pinion steering has made the biggest difference.

Our pick the is the creamy straight-six diesel in the G350d, although it’s possible to get a full AMG G63 with a twin-turbocharged petrol V8 making almost 600bhp. 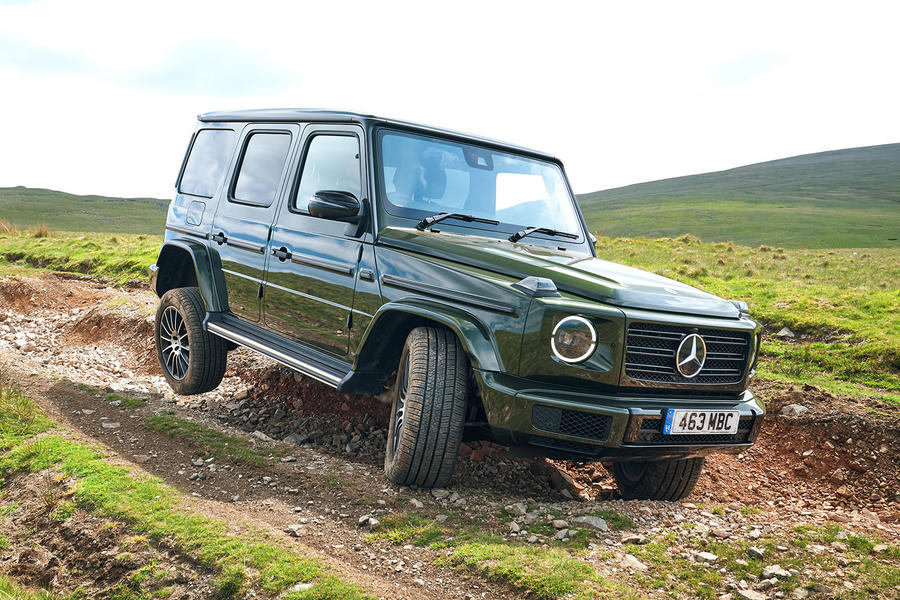 Save money with new G-Class deals from What Car?

Park, for a moment, any sensible considerations you might have, because the Ranger Raptor is a Baja-inspired pick-up truck that aims, quite simply, to please. It’s a little larger than the standard Ranger, but the real magic lurks beneath the body, where widely re-engineered axles, uprated springs and Fox motorsport dampers take the place of leaf springs at the front and the old Watt's linkage previously found at the rear. The set-up has been tuned to work best with no additional load and at speed, and ground clearance is up 30%. We’ve previously described this car as a ‘rough-track sports car’.

Weaknesses? You get nothing more than a 2.0-litre four-cylinder turbodiesel under the bonnet, and at just under £50,000, it’s quite expensive. As a working commercial vehicle, its capacities are limited; but as a method of covering very rough terrain at outrageous speed, it’s almost without equal. 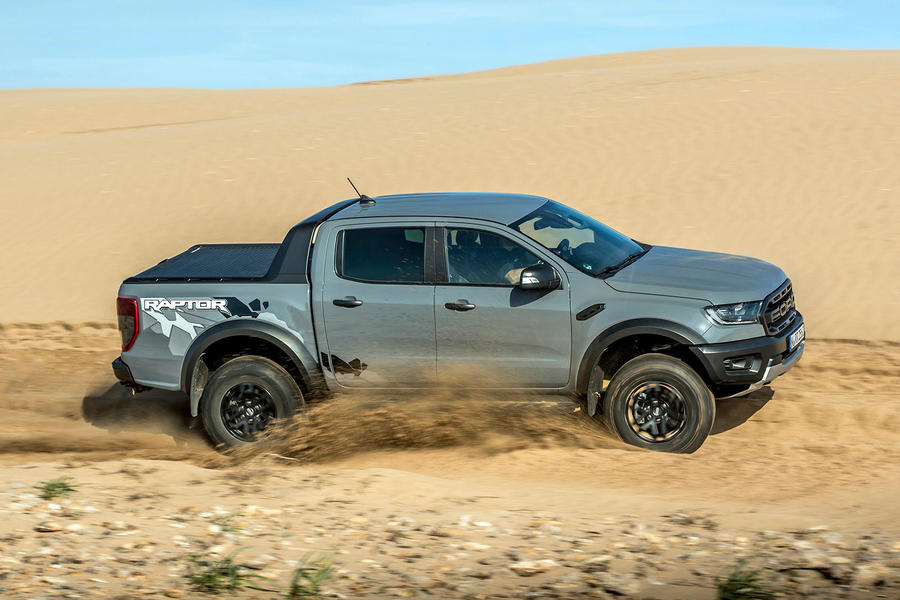 Save money with new Ranger deals from What Car?

You might wonder why the fifth-generation Land Rover Discovery doesn’t sit higher up this list, even given the calibre of the cars above. It is, in the grand scheme, terrifically competent off-road but matches that with wonderful road manners for an all-round package that none of the others can quite compete with. Everywhere the Discovery goes, it does so with a calm assurance.

It isn't, however, as capable as many car on this list when the going gets tough, and for a product with at least one eye on luxury, the interior technology needs revitalising and the powertrains should be more efficient. Hugely likeable, mind. 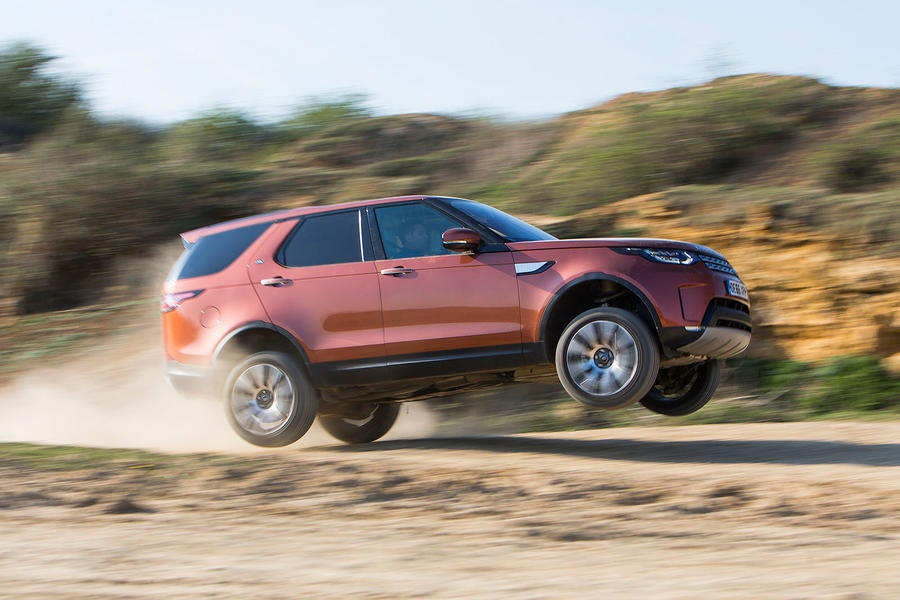 Save money with new Discovery deals from What Car?

If you want the world to know how serious you are about your weekend mud-plugging, what better way to show it than by buying a car that looks a bit like the world’s most iconic offroader – but that is actually a highly specialised customer rally raid car underneath? That’s precisely what you get with the Bowler Bulldog; an offroader built on the niche Derbyshire-based motorsport outfit’s latest ‘cross sector’ platform, and engineered well enough to convince Land Rover itself to acquire the whole company not-so-long ago.

The Bulldog is built on a bespoke monocoque chassis and uses long-travel suspension adapted from what you’ll find on a Discovery and Range Rover Sport, with heavy-duty springs and dampers there to take real punishment.  Both supercharged petrol and diesel engines are available, with an enormous fuel tank delivering the desert-crossing range that many rally raid addicts require in the latter case. Opt for a petrol instead – and there’s a hell-raising 5.0-litre V8 with 567bhp, should you want it – and your fuel economy and range drops… well, quite a lot. There’s plenty of room in the flatbed for jerry cans, mind you.

The Bulldog’s performance ranges from hot-hatchback- to sports car-quick depending on engine choice, while its ride and handling is amazingly precise and controlled on the road, yet also indefatigably rugged and huge fun over ruts, gravel, mud and sand. 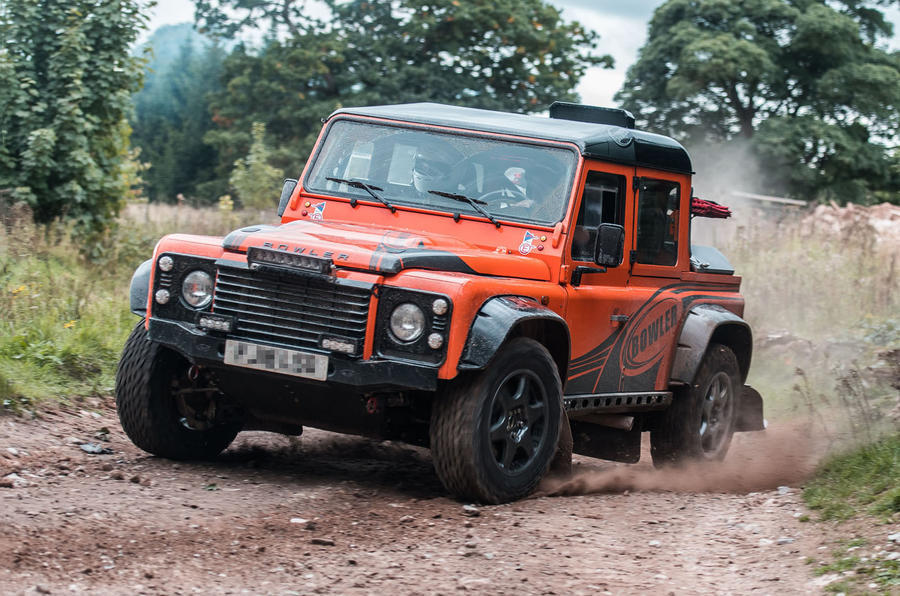 Suzuki markets the Jimny as the world’s only lightweight proper off-roader, which is all very true, refreshingly. The car weighs just over 1100kg but uses a ladder-frame chassis with rigid-axle suspension at each end and a low-ratio four-wheel-drive gearbox. There are, alas, no locking differentials, but with price starting below £16,000, nor would you expect there to be, and this thing really works off-road, as we’ve demonstrated with a twin-test against a Land Cruiser. Indeed, with tiny overhangs, its approach, breakover and departure angles are all superior to those of the Wrangler, which is quite something.

You will also, we guarantee, fall for the Jimny’s kei car looks, which is just as well, because its naturally aspirated 1.5-litre petrol engine isn’t particularly economical, its boot is tiny and its road manners are only a notch or two above dismal. 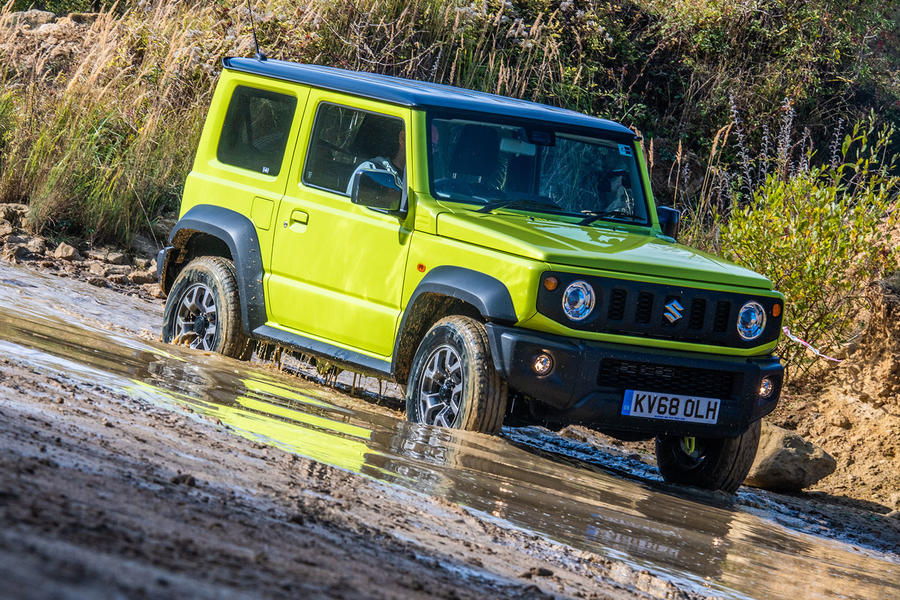 Save money with new Jimny deals from What Car?

The ‘AT’ stands for Arctic Trucks – the Icelandic expedition specialists who will modify your off-roader to go almost anywhere on earth, including the North Pole. The Isuzu D-Max is already among the more ruggedly robust and capable pick-up trucks, and Arctic Trucks' dedicated off-road tyres, 125mm increase in ride height and upgraded suspension (with increased travel) unearth its true potential.

Bear in mind, however, that this is very a much a specialised off-roader. It may be cheap to run, but it certainly isn’t cheap to buy, and you pay for the phenomenal ability with ride quality. Note that Artic Trucks will also turn its attention to the Nissan Navara and Toyota Hilux, both of which are marginally more hospitable in normal driving. 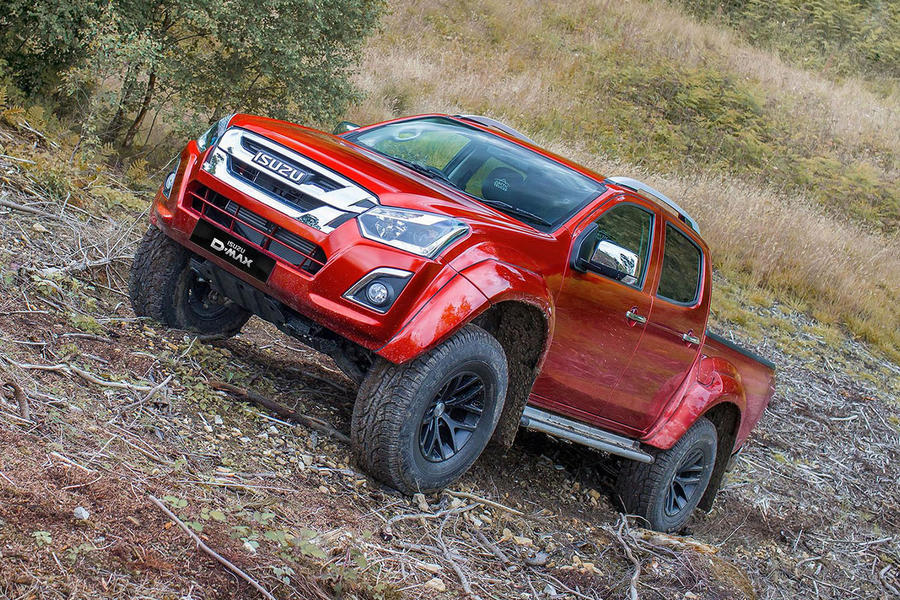 Save money with new D-Max deals from What Car?

Dampers built to World Rally Championship specification in a mid-engined device touting 350bhp per tonne? That would be the Nomad – Somerset-based Ariel’s second car after the devastatingly quick and responsive Atom. Here you get knobbly tyres, double-wishbone suspension strengthened over that of the Atom and those incredible dampers from Öhlins (sadly, only at extra cost – but worth every penny). They come with dual-rate springs to give the car pliancy and control at varying degrees of travel. Meanwhile, the steering is unassisted and the brake bias can be altered, so although the Nomad will cover rough terrain as supersonic speeds, it remains, at its core, a fabulous driver’s car.

It is, of course, frighteningly impractical and pure flight of fancy; is only rear-wheel drive; and has little practical use in the world inhabited by most dedicated off-roaders, and so it does no better than eighth on this list. We do, however, adore the Nomad for even existing. 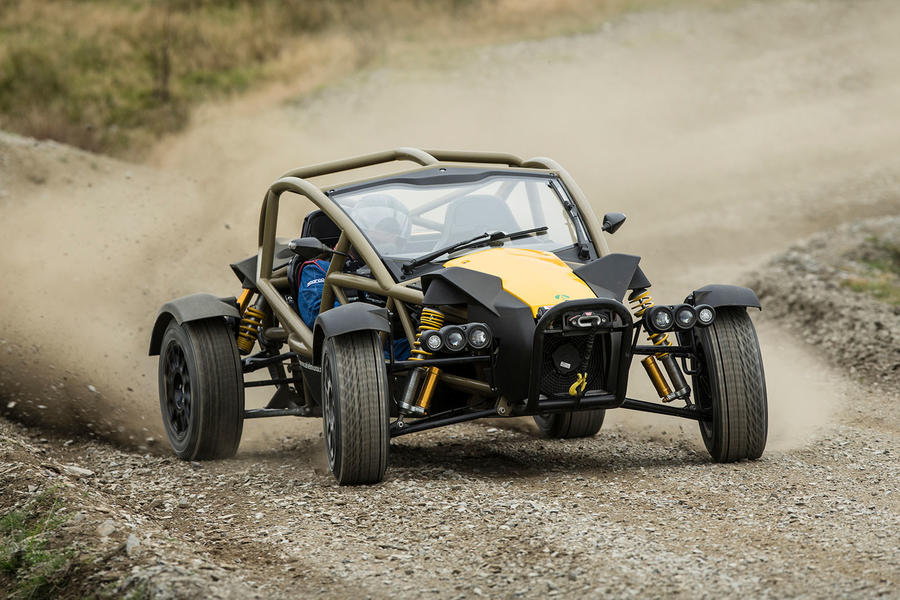 Hailing from South Korea, the Rexton isn’t pretty, but it is a rugged, honest workhorse and remarkably good value. Its interior is decently appointed, it has four-wheel drive with a low-range gearbox for crawling and heavy towing, and it’s straight-up tough in an old-fashioned way, with a ladder-frame chassis and box-section reinforcements.

It will also tow up to 3.5 tonnes and has almost 2000 litres of luggage capacity with the second row of seats folded flat. Manage your expectations, dropping any hopes that it will perform or handle like the BMW X5 or ride like the Audi Q7, and the Rexton presents surprisingly well. Few passenger cars would go further offroad with as much onboard practicality for less outlay. 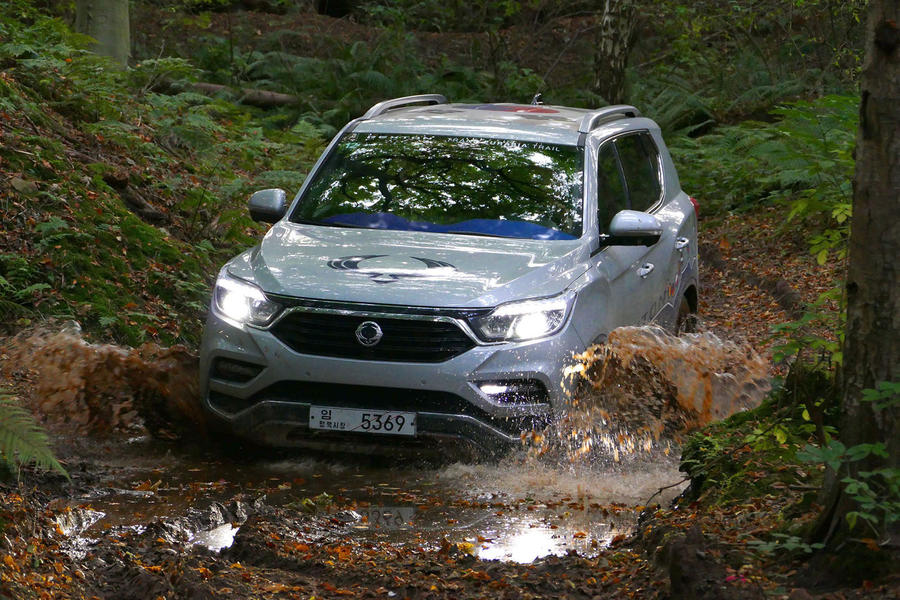 Save money with new Rexton deals from What Car?

A great list of off road vehicles but my favorite is Toyota Land Cruiser.