Coventry-based manufacturer Triumph had more lives than a box of kittens during its tumultuous 95-year existence, with seemingly endless buy-outs and rebrandings before the factory doors closed for good in 1984.

However, the thought of Triumph models remains an evocative one, invoking memories of sports cars and sexy roadsters. Autocar’s review of the TR7 Drophead in 1980 embraced the car’s sex appeal with a tongue-in-cheek spread featuring a young lady whose dress code matched that of the topless TR7. It was a risqué reference that would have been at home in one of the Carry On films of the time.

The reference was more than innuendo, though, as was realised early on in the review. “Much more than just a convertible version of the Triumph TR7, the new Drophead presents a changed and greatly improved concept for BL’s sporting two-seater,” our tester wrote.

The Drophead introduced a five-speed manual gearbox with a lower final drive ratio than before, while some otherwise welcome structural strengthening had unavoidably added weight.

A ban on the sale of convertibles in the US at the time had led to Jaguar and Triumph only developing hard-top cars. However, once the ban was lifted, it took Triumph five years to transform the coupé into a convertible. “But now it is here, we can say from the outset that the transformation to an open-top has been achieved with the highest competence,” we reported.

On its looks, we felt there was “universal acclaim” for the attractive lines of the TR7 Drophead. “It achieves a degree of simplicity of styling in spite of heavy bumpers,” our tester wrote. “The wedge shape and raked screen give an impression of speed.”

Fortunately, there was substance to back up the style. “Those shapely lines and the swept-back windscreen would look rather silly if the TR7 did not have the performance they imply,” said our man, who found that the TR7 possessed ample acceleration for swift overtaking or tackling hills. We also thought there was “good spacing of the gear ratios” and the engine had “a wide range of useful revs”, pulling strongly and very smoothly as it did from about 1500rpm right through to 5500rpm.

Our tester thought that the gearlever was well positioned and easy to use, too. “It’s ideally placed for the driver’s left hand to fall naturally from the wheel straight on to it, and the gearchange is very light and smooth in action,” we said.

We also found that the TR7 understeered. “Cornering behaviour is consistent and reassuring until the car is pushed hard through corners,” continued our tester. “The general feel of the handling remains easily manageable, though, and the driver has confidence to corner hard without feeling that the car will respond unexpectedly and catch him out. Even when cornering very fast there is a minimum of body roll, helped by having an anti-roll bar at each end.”

We felt that the steering, meanwhile, was impeccable: precise and responsive to the smallest steering input.

“The driving position,” our tester said, “is exceptionally comfortable, with the chubby little steering wheel set at ideal arm’s length for most drivers, and with generous leg room and a range of seat adjustments.”

Elsewhere inside, we observed that the minor controls “are well arranged” and “the instruments clearly marked”. 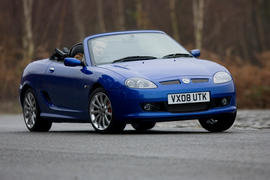 The MG TF is undeniably flawed, but it is an appealing driver’s car nonetheless

Our verdict of the TR7 surmised the positivity: “It is in its all-round behaviour that the TR7 appeals, and although some of its competitors may match it for ultimate handling or offer a little more performance, it certainly achieves a very good blend of sporting handling with comfort, performance with economy, and interior space with external compactness. Though not cheap, it is also reasonably competitive on price.”

In the beginning,Triumph created the TR1.. and by the 7th they should have taken a rest!
Flyingscud 19 May 2016

I first saw one of these as a fixed head in gloss black with a tan interior, when it was new. The local BL rep rocked up in one to sell my boss an Ambassador 'landcrab'. We were blown away, thinking it a pretty smart bit of kit then. Sadly the cynicism of the age against all things BL crept in (not helped by boss's 'landcrab' front suspension collapsing because of the overtightened bolts sheering in the engine block) and my colleagues gravitated towards Lancia Beta Coupé Sportbacks and Audi 100 coupés.
Beastie_Boy 19 May 2016

Never been a fan of classic British Cars

(Sunbeam Alpine being the only exception) but I think time has been kind and the TR7 has aged quite well (from a design point of view, I have had a Fiat X1-9 and a Porsche 914, both cool but very flawed, too)... I think the same now of the Jaguar XJ-S. Jaguar is another brand I have little interest in but I think the XJ-S has become quite a cool looking car.
View all comments (7)