BACK TO ALL NEWS
Currently reading: Figuring the MG Metro 6R4 rally car, 2 April 1986 - Throwback Thursday
UP NEXT
Grand touring: 1000 miles across Europe in the new Alpina B3

The chance to fit Autocar’s Correvit timing equipment to a Group B rally car wasn’t one that technical editor Graham Jones was going to pass up.

With top rally driver David Llewellin at the wheel and Jones as the second tester in the co-driver’s seat, the British-built competition car recorded times that were unparalleled by the standards of the day and remain stunning in 2016.

Jones wrote: “The Metro’s 2991cc V6 proved quite capable of accelerating without the slightest hint of baulkiness from 20mph – an incredible feat for a full-blown competition engine producing in excess of 400bhp – and powered the 6R4 to a series of mind-boggling incremental times, the most impressive being the 2.8sec required to climb from 70 to 90mph, while the slowest – 20 to 40mph – was still only 4.2sec… and this was fifth gear.”

Autocar’s man could barely hide his incredulity at how fast the mid-engined, four-wheel-drive hatchback was. “Part of the raison d’être of the MG is its lag-free throttle behaviour and tremendous mid-range,” he explained. “Power delivery could be likened to being on the crest of a virtually permanent horsepower wave available with just a touch on the throttle pedal.

“In fourth, for instance, there is but 1.0sec difference between the quickest and slowest 20mph intervals spanning the 20-90mph acceleration. The quickest interval was an amazing 1.3sec between 30 and 50mph in second gear.”

The Computervision-sponsored Metro 6R4 was the quickest machine Autocar had ever figured and, but for a quill shaft failure in the differentials as Llewellin and Jones launched into the first standing-start run, the figures could have been even more impressive.

“The shaft was a development item and its failure, plus signs of fatigue in the shaft subsequently fitted so we could complete our runs, suggested it wasn’t quite up to handling the forces imparted by the V6 engine,” wrote Jones.

“With the replacement shaft fitted by the Austin Rover mechanics, Llewellin drove slowly back to the horizontal straights and proceeded to reel off half a dozen runs, the last pair of which produced the mean test results.

“At 1.2sec to 30mph, 3.2sec to 60mph and 8.2sec to 100mph, it is the fastest-accelerating wheel-driven car ever tested by Autocar. Furthermore, the 11.5sec required to cover the standing quarter mile (terminal speed, 117mph) means the 6R4’s performance would put many purpose-built dragsters to shame.”

Maximum speed in a competition car is something of a moot point since it is affected by variables such as tyre choice and gearing, which are altered to fine-tune a vehicle for a specific event. But for the record, Llewellin’s self-imposed 9000rpm rev limit equated to a 119mph maximum in fifth, a speed the car reached soon after the quarter-mile post.

With Group B rules scrapped at the end of 1986, the 6R4’s first full season of WRC competition, Austin Rover’s beast barely got a chance to achieve the kind of results of which it looked capable. It did, however, achieve a multitude of wins at national level and in rallycross, as well as earning a place in rally fans’ affections. 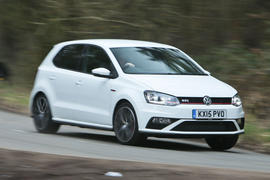 18 February 2016
I remember when I just started at Internatinal Automotive Design in the 1980's when IAD made all the body panels (that were unique to 6R4) for this British Group B.
We even had a Forest stage set up car on the IAD UK Fleet which could bee seen running around Worthing occasionally, quite a sight and sound.
Never quite as cool as the Peugeot, Lancia or Audi but still great.

18 February 2016
IAD was the Polly Peck of the motor industry. First a meteoric rise, then it looked too good to be true, and then it was.

IAD was the Polly Peck of the motor industry. First a meteoric rise, then it looked too good to be true, and then it was.

This comment is perhaps a little unfair. When it is noted how 'antiautomotive' UK government,industry and society has been and including the disastrous effects of the UK staying out of the Euro,( with the eventual collapse of all British industry from cutlery to aircraft, bicycles to trucks and cars to electric motors), the net effect of which at least made the UK a good assembly plant for Asian owners and technology,(from Nissan to Tata), the fact that IAD survived as long as it did is a miracle.
What has been lost with their demise can be seen in the product of just one of their alumni, Marcus Hotblack's work on the Ford Territory.