BACK TO ALL OPINION BLOGS
Currently reading: Matt Prior: Modern cars are too effective for their own good
UP NEXT
Buying a £1000 Saab from a hidden car collection

Matt Prior: Modern cars are too effective for their own good

Yes, our man would like cars to get a bit worse - a bit lighter, narrower and therefore more fun to drive
Share
Open gallery
Close
Share story

I want cars to become more dangerous. Well, obviously I don’t, but that’s the uncomfortable natural conclusion of the argument I’m about to make.

Modern sports cars are too fast for the road. Nothing particularly controversial there, I don’t think. “A Porsche 911 Turbo’s limits are only attainable under conditions of total brain fade on the road,” we once said.

Was that recently? About one of those big ones whose power output starts with a six? Hmm. Much as I would like to think that ‘during my lifetime’ counts as recently, it was in December 1978 – when the 911 Turbo’s engine had recently been uprated to a whopping 300bhp.

Today, a maker of hot hatchbacks will barely bother getting out of bed to produce one with 300bhp. The Hyundai i30 N has a little less than that, which in some quarters makes it deficient. Yet recently I drove one on an autobahn at an indicated 170mph.

In that same magazine in 1978, former race driver, special builder and long-time Autocar contributor John Bolster wrote that “one of the first priorities for sporting motoring was a narrow car”. And if you’ve ever threaded a modern family car that claims to be a bit sporty down a British B-road in an attempt to unlock some of that performance potential, I’d be surprised if you disagree. I would rather drive a BMW M4 than an M5. I’d rather drive an M2 than an M4. And I’d rather drive a Caterham Seven than any of them.

The tremendous thing about little, light cars like Caterhams is that they feel good at any speed. But even so, it would be nice to be able to drive them closer to their immense limits, to feel like you’re getting more out of them: challenging them as well as yourself. 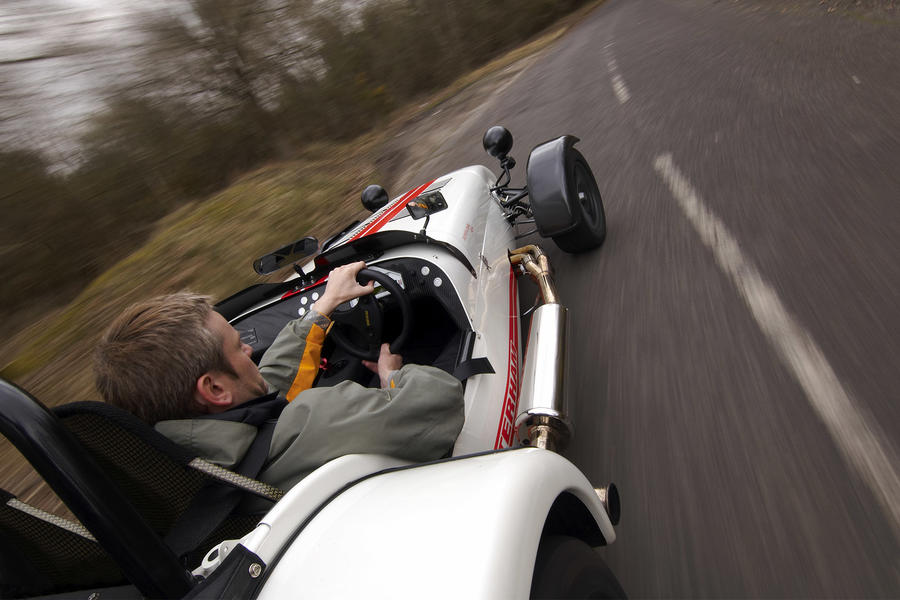 You can try it if you like. Take a modern car, even a family saloon, and push on a bit to reach its performance limits. But if you do, you will be going faster than other traffic on the road typically by a factor, I reckon, of two. I can barely think of a car today whose performance isn’t limited by power, grip or brakes; it’s by visibility. They can go faster than you can safely see.

This, in the greater scheme of things, is probably a good thing. New cars are safer than ever. I’m still astonished by how four tiny tyre contact patches can let a car go, grip and stop. Tyre technology brings Le Mans rubber compounds to road cars within a couple of years to allow this. It shortens stopping distances and makes them better at avoiding crashes. And if you do crash, new cars look after you better than ever, too.

But in getting more capable all the time, cars’ limits push ever further away. And wouldn’t it be nice, from time to time, to experience them? To have something tiny and light, with really skinny tyres and dynamics you can feel and appreciate at a sensible speed? Put a Lamborghini Aventador SVJ and an Austin Seven special next to any road bar an autobahn and I’d choose the keys to the Seven.

Which uncomfortably means that, yes, ultimately, I’d like cars to get a bit worse. To get a bit lighter, narrower and therefore worse to crash in, and also to become less grippy, so brake less well and therefore probably be more likely to crash. I inadvertently want, although I don’t actually want, a car that’s more dangerous. They’re not going to give us one, are they?

Matt Prior: Why executive AMGs go the distance

Can you pack a Caterham for a two week driving holiday?, got kids?, what about the Weather?, a Caterham , great though it maybe for narrow twisty up n down roads, it's really a second car, a toy for the weekend or whenever, it does nothing else, you can't do a weekly shop in it, your exposed to the elements good or bad, and in an accident I imagine you not much more protection than a Cyclist, no, I'll have four doors a decent sized boot, a roof over my head, and the appropriate safety systems thanks.

With only 80hp and half a ton on 155 tyres can't help thinking the Caterham 160 might well be the ultimate UK driver's car on sale today.

I agree wholeheartedly with almost all the sentiments here. Most of the premium and sportcar makers for the last 30 years have only spent their time and money trying to leapfrog the opposition in BHP terms with every revision.

All the time, an extra 15hp here or another 20hp there . In real world this means nothing at all. I will happily bet a few quid that an original M3 will not be beaten by a new one  across country in normal real world driving conditions. Unfortunately the press fall head over heels for this ridculous past time.