It was only there for a fleeting moment, but I saw it. It was a shy, somewhat coy, slightly surreptitious move. It was even preceded by a quick look to the left and right to make sure the coast was clear. But then, and unmistakeably, the little white Volkswagen winked at me.

And silly slice of concept car theatre though it was, in that blink-of-an-eye gesture (pun entirely intended), a whole new world opened up to me. A world where cars were no longer passive machines there to be operated only by those within, but quasi-sentient beings capable also of interacting with those without. Capable of mild flirtation, even.

If VW has its way, by 2025 this I.D concept will have spawned an entire family of autonomous-capable cars amounting to one in every six cars it sells, which means one million per year in total from the VW brand alone.

There will, of course, be Audis, Skodas and Seat models too. Up to 30 across the Volkswagen Group's portfolio, in fact. And they won’t just be able to drive you home from the pub, they’ll make people like you, too, slowing to let pedestrians cross the road and indicating to them with multi-function headlights that it is safe to do so. Pursue this to a not illogical conclusion, and one day, if it spots someone it knows you’ll fancy and is registered to the same app, it might even swipe right for you.

But, however, diverting the idea of getting your car to make the first move, for now there are more pressing issues to hand. Like digging VW's reputation out of the Mariana Trench-sized hole it has dug for itself of late. Perhaps this is why when VW talks about the I.D, it's not afraid to talk big. Big enough to compare its prospects to those of the Beetle and Golf, the former being the best-selling single car design there has ever been, the latter more successful still, albeit over seven distinct generations.

Indeed, VW is so keen to leave the past behind and focus on the future that it's happy to let loose a hack like me in the world’s one and only example, despite the fact that compared to the production car to come in three years time, it barely functions. 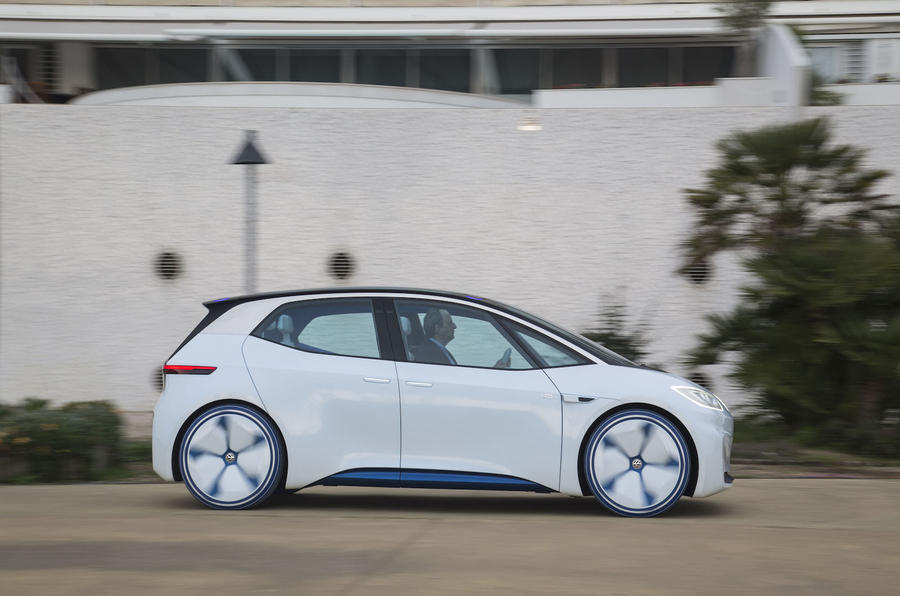 So what is it about the I.D – which can stand for Identity, Individual Design, IDea or anything else you want – that makes Volkswagen so sure it can succeed where every other manufacturer who has tried has so far failed? What wizardry has it alighted upon that is going to turn the I.D into a literal million-seller?

The company is surprisingly opaque on the subject. Christine Leuderalbert is a VW e-Mobility product specialist who says only that the car will contain ‘the latest, most energy-dense battery technology’. But it will still have lithium ion batteries like every pure electric car since the Nissan Leaf broke cover in 2010 and, it appears, will not be built around a super-light, strong but expensive carbonfibre shell like the BMW i3. Using VW’s new dedicated electrical MEB architecture, it will follow conventional thinking in laying out its batteries flat and thin along the floor, pushing the wheels out to each corner so the powertrain resembles a skateboard, albeit with an electric motor at the back driving the rear wheels.

So, it seems that VW’s approach is the one that almost always results in the greatest success: wait for everyone else to do the pioneering stuff, make all the cock-ups and sort them out, then commit when the hard work has been done and direct all your resources to doing what’s already been done better than anyone else.

The I.D concept illustrates the point nicely. At fractionally over 4.1 metres long, it's closer in length to a Volkswagen Polo than a Golf, but it sits on a wheelbase only fractionally shorter than that of a Volkswagen Passat. And because the motor is at the back, the front wheels can turn far more than those of a conventional car, resulting in a tiny, sub-10-metre turning circle.

Inside, it feels almost impossibly airy – the metal roof supports are so thin and the glazing so expansive that the view out is as if from within a giant, minutely structured bubble. Come production, the roof will be raised further still, although I strongly suspect its pillars will need to be more heavily bolstered to provide sufficient rollover protection. Whether one appears between the two rows of seats remains to be seen, but Leuderalbert says the production car will have ‘conventional’ doors rather than the electric, sliding rear items on the concept, and it’s hard to see how those could be engineered without a B-pillar. 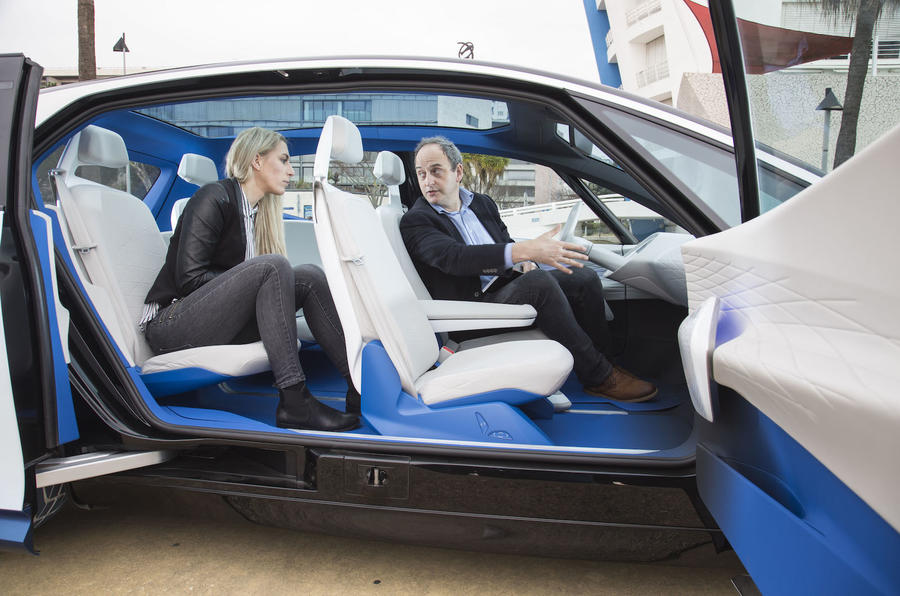 Predictably, the I.D is terrible to drive. I’m restricted to a short strip of pedestrian space alongside a marina in Lisbon, Portugal, and VW has thoughtfully limited the car’s top speed to just a little less than 20mph. It accelerates slowly and haphazardly, even at these speeds showing no sign of the sub-8.0sec 0-62mph time potential claimed for the production version. Yet we should not allow this to delay us, much less to dismay us: most concept cars won’t even move under their own power, so no profit lies in trying to infer some sense of what the real thing will be like, based on a few minutes in a contraption that would render a Unigate milk float as a Porsche 918.

It’s the ideas this concept contains, not its necessarily clumsy execution that should interest us here.

The first is platform versatility: the MEB platform has the elasticity of vigorously masticated bubblegum. It can create cars like this that are as small as a Polo, or as large as a campervan, as the MEB-based I.D Buzz Microbus concept shown in Detroit at the start of the year made clear. Frustratingly, some 16 years after VW first showed a 21st-century interpretation of its iconic Dormobile design, they still won’t say when or even if it will make it into production. But the existence and versatility of MEB makes it a clearly far more practical proposition.

Then there is VW’s answer to range anxiety, which is simply to provide as much or as little of it as you are prepared to pay for. When the I.D goes on sale for around £22,000 in 2020, the entry-level car will come with a quoted range of around 250 miles. That's usefully better than the 186 miles the latest Volkswagen e-Golf will do when sales begin next month, but still some distance short of the I.D’s true capability. If you pay for an extra battery pack, range can be expanded to 372 miles. The plan is for the additional range to be retrofittable and for all batteries to be replaceable when technological advances make it sensible to do so.

Actually, the concept is better at showing us what the fully autonomous I.D will be like in 2025 than the still-driver-dependent car will be in 2020. You can see the four roof-mounted lidar sensors that will be the car’s primary source of real-time local information, and you can watch as the approximately hexagonal steering wheel retreats into the dash to become a shroud for the display screen when autonomous mode is engaged. You can also see what VW calls ‘Augmented Reality’ with a head-up display that shows not merely your next direction but the contours of the road ahead as it twists and turns into the distance. I hope VW has considered the undoubted fact that frustrated rally drivers will use Augmented Reality as virtual pace notes. And, lest we forget, the I.D can wink and blink too, although, I was disappointed to discover, not squint. 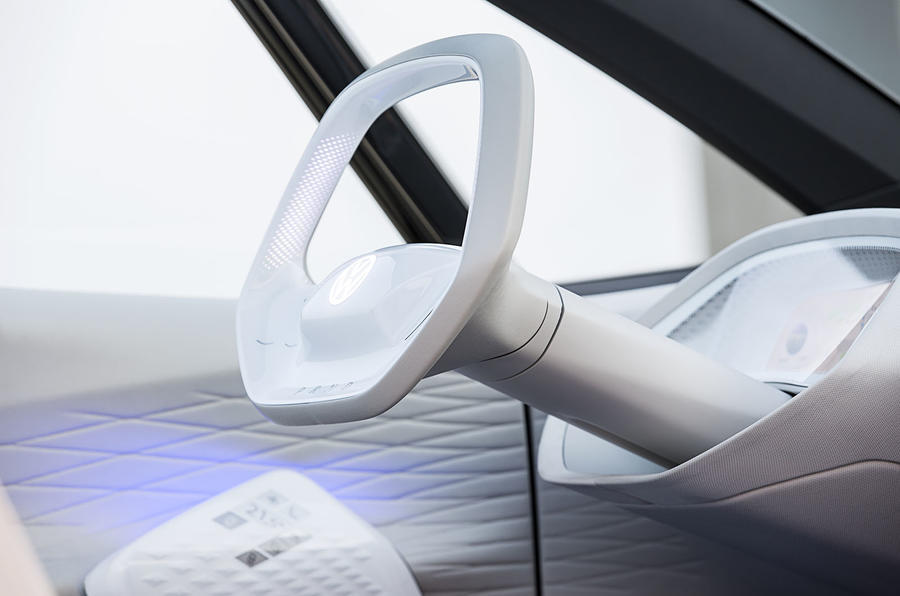 So, how real is what you’re looking at? Well, while the I.D show car on this page won't share a single component with the I.D production car in your local dealership three years hence, VW insists the essential concept will survive. Indeed, it has been quoted as saying this is 80% there. The look will be the same, less details like wing mirrors and door operation; the incredibly clean, almost spare interior design will survive and be polluted by as few switches and buttons as legal regulation allows. And, crucially, the packaging will be preserved and bring perhaps unprecedented levels of space efficiency to the class.

Then there is the cost: even without the current £4500 Government grant, if VW really can get it to market for less than £22,000 as is claimed, it will bring a level of sophistication, range and dynamism hitherto unknown at this price point. Of course, it remains to be seen what challenge rivals such as Mercedes-EQ will bring in the meantime, and it may be that by the time we get there, what seems like an incredible confection of performance, packaging and efficiency seems rather less out of this world.

Nor do we know what effect, if any, the very necessary and quite violent ongoing round of belt-tightening at VW will have. But we can judge only as we find at the time of discovery, and right now the I.D seems fresh, relevant, innovative and, most important of all, timely. And with a belly-crawling centre of gravity, a rear-biased weight distribution and correct-wheel drive, there’ll be no excuse for it not to be great to drive as well.

There is no point whatsoever in owning a car which one cannot drive. There is less point in owning an autonomous car which requires the attention of the occupant. Making either of these options require being plugged into the electric mains is the most pointless thing of all. Electric cars are going nowhere.
catnip 2 March 2017

I like the look of this, but I'd be nervous about buying any new technology from Volkswagen. So many times in the past they've taken the short cuts, to get the sales, rather than develop things properly. But maybe they've (at long last) learned their lesson?
Conte Candoli 2 March 2017

Yeah, very interesting but shouldn't it be "fewer details" rather than "less details"?
View all comments (11)