Funny that the company whose name translates as ‘people’s car’ now makes the vehicle type originally devised to accommodate the needs of gun-toting aristocrats.

Irony to one side, this new Arteon ‘Shooting Brake’ is an attractive car – far more distinctive in the metal than the original hatch, as well as being more spacious – and has been introduced for 2021 alongside range-wide updates. It’s about as exotic as Volkswagen gets when it isn’t building Syd Mead tributes such as the XL1.

Not that there are any real surprises here beyond the fact that VW has adopted a bodystyle until recently only properly explored by Ferrari and Mercedes. Engine-wise there remain the same four-cylinder TSI and TDI stalwarts you’d expect, including the 187bhp 2.0-litre petrol tested here, which with its seven-speed DSG is expected to be the most popular model in the range. Front-wheel drive is also the order of the day, except on the 197bhp 2.0-litre TDI, for which 4Motion can be optioned for around £1700 extra.

Actually, there is one other model that will have four-wheel drive. If there’s any true intrigue about the Arteon, it’s that underneath the long and artful clamshell bonnet VW will soon deploy its 1.4-litre PHEV ‘eHybrid’ unit and the 2.0-litre motor from the new Golf R. With 316bhp and two driven axles, the Arteon R Shooting Brake will present as an all-weather Audi S4 stalker, so don’t expect much change from £50,000. It will also replace the old 276bhp TSI as the flagship in the range, but should offer much more excitement than that slightly lacklustre model ever did.

As for that V6-engined prototype Volkswagen was allegedly testing, it’s not looking likely.

In terms of trim, your main options are either Elegance or R-Line, though apart from the latter’s larger wheels and tinted glass, there are few notable differences in terms of equipment, and none whatsoever when it comes to the mechanical package. What you go for is going to come done to how much you want your Arteon to stand out. 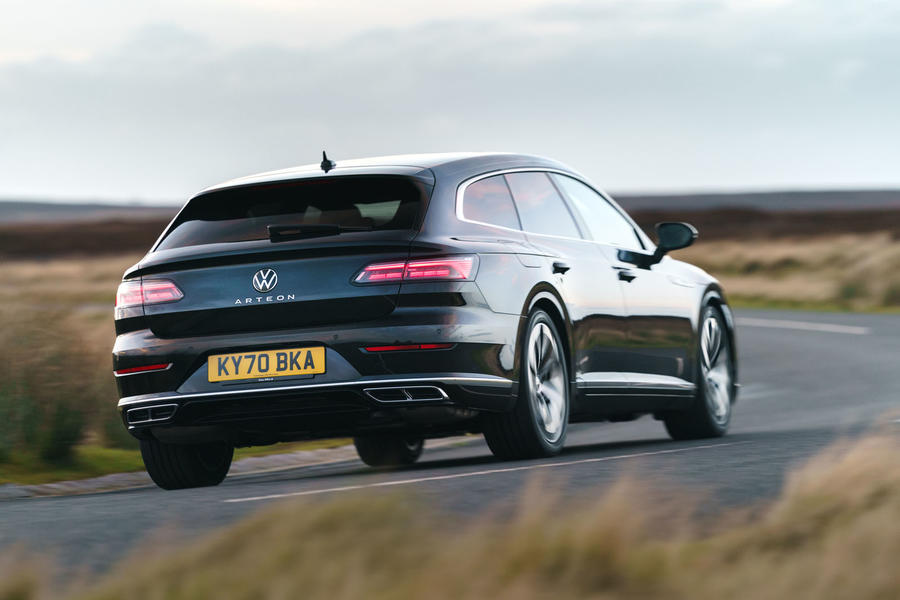 No matter the engine or the trim, the new interior is essentially a scaled-down version of that found in the Touareg SUV. It means that although VW’s obsession with touch-sensitive switchgear continues unabated, everything looks and feels very high in quality indeed. It’s not such an imaginative place, but the textures are interesting and the atmos is warmer than what Audi is currently managing.

Visibility is also excellent for such a large car. The A-pillars are deliberately slim and the glass-house that wraps around the back of the body is generous, so the Shooting Brake is an easy car to manoeuvre. Paired with the panoramic roof standard on R-Line cars, the resulting spacious but somehow close ambience is similar to that of the Porsche Panamera Sport Turismo. Long journeys are pleasant.

But that’s where the similarities end, because despite the rakish body, the Arteon simply isn’t that kind of the car. It doesn’t feel that serious. The driving position is considerably perched compared to that of the BMW 320i Sport Touring – which being similarly powerful, similarly sized and almost identically priced, is our particular Arteon’s most formidable rival –  though the half-bucket seats are at least supportive and there’s ton of adjustability in the steering column. You’d just expect something with a little more intent. After all, it’s not a Passat Estate.

Where The Arteon excels is space. There are leagues of second-row space. Really, it feels bigger than even an E-Class back there, with so much legroom you don’t know what to do with it. And as for boot space, don’t be perturbed by the official figures. The Shooting Brake’s 565 litres with the seats up is only two litres greater than the hatch, but this doesn’t account for space above the beltline, which is where the Brake makes its gains. To go bigger with this size of footprint, you’d need to pay Skoda a visit and drive something less outwardly elegant. The ski-hatch is also useful, and that the rear bench folds almost flat somewhat makes up for the huge boot-lip.

As you might be expecting to hear, there isn’t much to whet the appetite, and the economy-minded DSG gearbox mapping further dulls what modest performance potential 187bhp and 236lb ft ever had. The car will tolerate being hustled, but among front-driven rivals, the Mazda 6 holds far more appeal, and the VW’s softer spring rates and vanilla steering are best suited to loping down motorways. You could option VW’s adaptive dampers and XDS ‘limited-slip differential’ to spice things up, but their effect wouldn’t be transformative. The balance is determinedly understeery, though on the larger 19in wheels, the Arteon’s ride quality does come really quite nicely together at speed, having been a little brittle at lower speeds.

And one what, actually, might be better suited to the 2.0-litre TDI unit, because the petrol isn’t that torquey and, when you really want to move, it’s all a bit laboured. 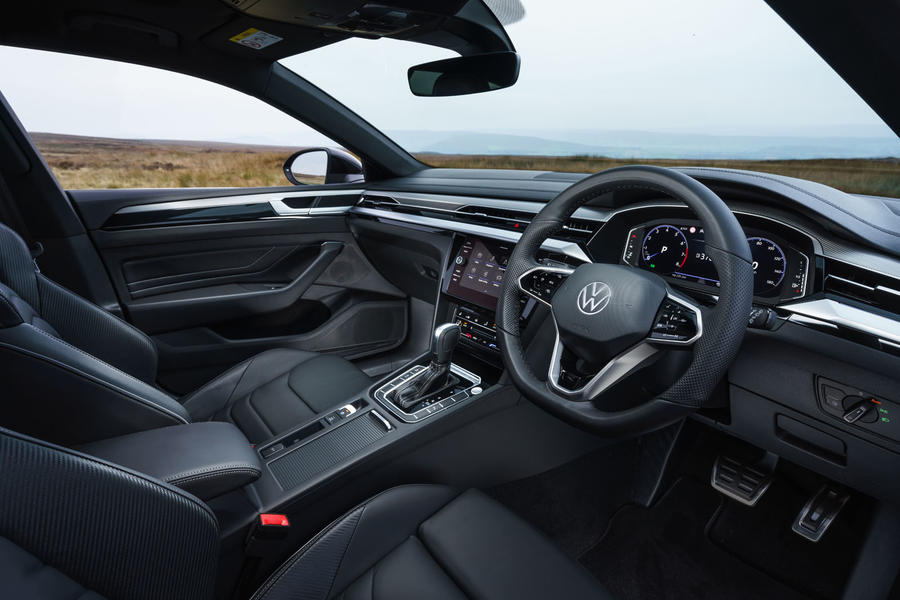 Striking as the Shooting Brake is – and, believe me, it really does catch your attention – it’s difficult to make any convincing case for this 2.0 TSI version when the BMW 320i Sport exists. Or, even better, the 320d M Sport.

For space and rarity, the Volkswagen wins, but in every other parameter, it comes off worse. And when you consider the almost equally striking Peugeot 508 and the fine-handling Mazda 6 Tourer, the Volkswagen also seems distinctly expensive.

I suppose something that looks this sleek needs to grip you in some other way to feel really convincing and fully justify itself. The Arteon Shooting Brake is comfortable and usable and its balance of economy and performance is certainly adequate.

But it isn’t in any way memorable to drive to spend time in. It’s an attractive tool, but a tool nonetheless. 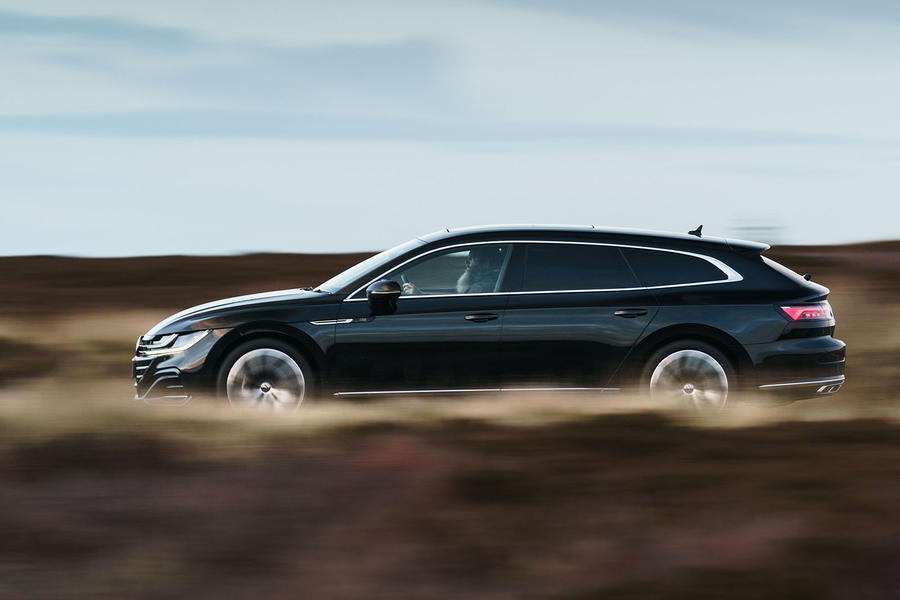 Not when a 250bhp Jaguar XF R-Dynamic Sportbrake is cheaper it isnt.

"It means that although VW’s obsession with touch-sensitive switchgear continues unabated, everything looks and feels very high in quality indeed. "

At least AutoExpress' reviewer had the guts to say that the touch panel heating controls were less intuitive than buttons, why don't motoring journalists pull manufacturers up about these things? Both screens are mounted really low down on this Arteon, too.

They have swapped the emissions with consumption