You might wonder what ‘Polestar’ really stands for these days.

Admittedly, it’s not obvious. On one hand, Polestar is a stand-alone subsidiary brand of Volvo – one currently readying itself to release the 600bhp 500-off Polestar 1 plug-in hybrid, with its three electric motors and an exterior design that seems to combine elements of art deco and Bauhaus, only remixed from the future. We’ve driven the prototypes and they are phenomenally desirable, as you would well expect for the £140,000 asking price.

You can ignore that Polestar, though, because on the other hand, there’s ‘Polestar Engineered’. This is a trim level that made its debut last year as an even more serious take on the range-topping T8 Twin Engine version of the US-built S60 saloon – and it's now available on the V60 estate and the XC60 crossover. ‘Trim level’ is putting it lightly, in truth. Software tweaks might liberate only 20bhp or so from the 380bhp plug-in hybrid powertrain (transverse 2.0-litre four-cylinder turbo for the front axle, with an independent electric motor for the rear), but there are more appreciable changes elsewhere.

The brakes, recognisable by grooved discs and deep-gold calipers, are from Brembo on the S60 and V60 models and Akebono (which also supplied those for the McLaren P1) on the XC60, the largest Polestar Engineered model available so far. There’s also now an aluminium strut brace in the engine bay, to stiffen the nose and hone the steering response, and the Aisin eight-speed automatic gearbox has been tweaked for quicker upshifts.

These cars also get glossy black exterior trim, dark chrome exhaust tips, alloy wheels that look as though they could cut you, and gold seatbelts. And in the flesh, the V60 Polestar Engineered is duly one of the cars that simultaneously blends in while absolutely standing out. It's another knockout from the company whose CEO was formerly head of design.

But the headline additions are the adjustable dual-flow-valve dampers brought in from Swedish suspension superstars Öhlins. And it’s important to make the distinction between ‘adaptive’ and ‘adjustable’. The characteristics of the former are usually altered at the touch of a button handily positioned on the transmission tunnel. On the Polestar Engineered V60 tested here, however, softening the damping characteristics involves opening the bonnet and twisting a pair of gold dials sprouting from the strut towers. And that’s the easy bit: to get at those for the rear axle, you’ll need to jack the car up and remove the protective rubber covers. Talk about esoteric appeal. 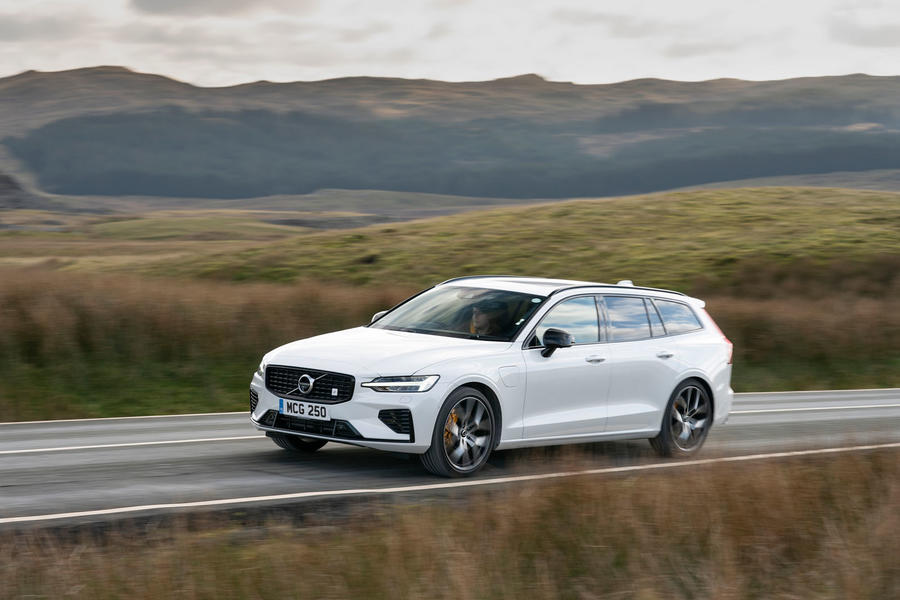 The V60 T8 Twin Engine Polestar Engineered is a confusing car because adjustable dampers are the preserve of track-day specials such as the new Mercedes-AMG GT R Pro. To find them on a hybrid estate is like discovering Isofix points on a Caterham Seven, and difficult not to wonder why exactly Volvo has made this car.

We'll therefore focus on the Öhlins suspension. Of all the additions, it’s the most intriguing, and we've already covered the fundamental T8 Twin Engine powertrain in detail elsewhere.

First, though, there’s a definite improvement in the steering response. The motion is now cleaner as it moves away from centre and it's easier to judge the surprisingly small inputs needed to guide the car along a curving stretch of road. There's also now an extra level of tacticility (most likely from the new Pirelli P Zero tyres, and perhaps the lighter, forged alloys) although ultimately this set-up still lacks the bubbling feedback you'll get from a Mercedes-AMG C-Class or the deadpan accuracy of the helm in an Audi RS4 Avant. But it isn't a bad effort, and is appreciably more engaging than typical Volvo fare.

You notice the new six-piston brakes, too. The biting point is now better defined and the progressive delivery of braking force more linear and simply more resolute. Just like the steering, it's much improved for making smaller inputs and, in broader terms, it's good to see a brand that recently annouced plans to limit every car it makes to 112mph making thoughtful detail revisions that improve the actual driving experience (as well it should, for almost £60,000, but we'll come to that in a moment).

Now, the dampers themselves. They can be moved through 22 clicks, with position zero the firmest. Bury deep enough into the digital owner’s manual, accessed via the 9.0in touchscreen, and you can even find some official recommendations. The default factory setting calls for position six at the front and nine at the rear. There are also suggestions for comfort (12 and 15, respectively) and performance (two and four), although the same manual contradicts itself by also recommending that the front and rear axles always be set to the same position.

Ultimately it's not clear, and you're expected to play around. In fact, if you buy one of these cars and don’t at least once set the front to 22 and the rear to zero, you're probably not the target customer.

As for a set-and-forget combination, it's best to stick to bigger numbers for British roads and certainly avoid any single-figure digits. The factory setting is simply too firm although, this being Öhlins, it’s rarely brittle. Again, this is an important distinction. These dampers deliver a level of control and precision so palpable that it can be easily appreciated even as you’re being shaken about as if someone had swapped in the chassis from the Lamborghini Aventador SVJ but left the estate body. The movements are abrupt and often too punishing for a car like this, but you could never say they were brutal, as you would of the C-Class AMGs in their most uncompromising suspension modes.

We didn’t have time to get the car jacked up and start fiddling with the rear dampers, but we did play with those at the front, where anything between 18 and the maximum 22 seems to work best on the road and just about saves the V60 Polestar Engineering's skin as an everyday proposition. The improvement in ride quality is marked, in fact, the immediacy of the movements dissipating but the control and precision lingering on. And if you drive exclusively on challenging A-roads at speeds just above the national limit, I'd say there's not a comparable car in terms of practicality and performance that rides with this much polish, although outright agility clearly remains a somewhat abstract concept for Volvo.

That's where the other £60,000 performance estates really get the better of the V60 Polestar Engineered. They can't drive 25 miles on electric power alone, or glide into any environment in such unassuming fashion, but their motorway ride is certainly no worse and they would simply drive away from the Volvo on any road and in any conditions with a combination muscle, lateral grip and even more confidence-inspiring controls. Luscious vertical body control simply isn't enough to elevate the Volvo. 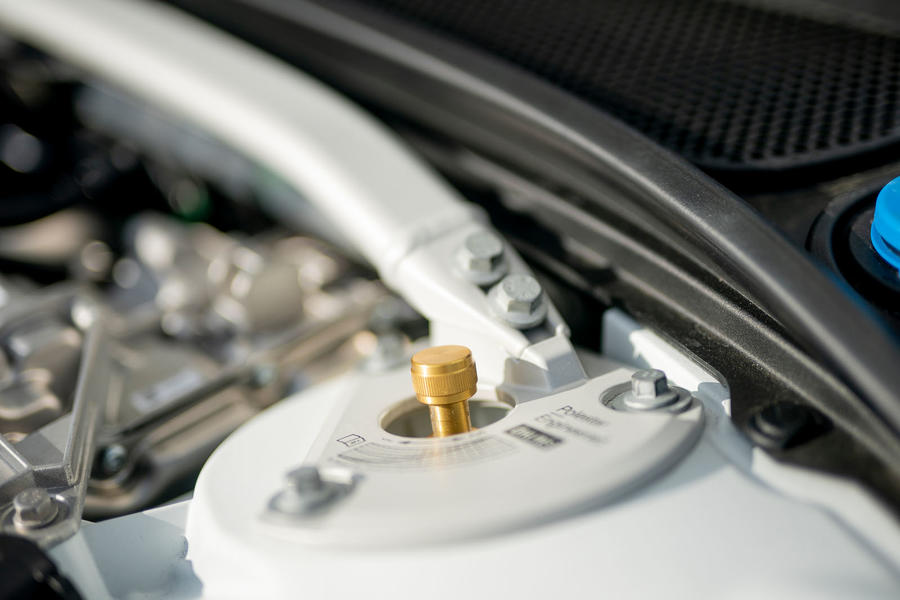 Polestar Engineered is an interesting concept, but also an awkward one. The marque clearly wants to create a halo effect for its regular saloon and estate models, and it also wants to challenge in the highest performance bracket of those markets – against the Audi RS, Mercedes-AMG and BMW M models, which sell well and have lately become dream marketing fodder.

Being attractive, fast and expensive, the Polestar Engineered in some ways ticks those boxes. But the challenge is that, in staying true to its broader strategy, Volvo has only four cylinders and electric motors with which to make headlines at a time when, really, you still need six in this class and the less mass the better.

Consequently, it has turned to weapons-grade chassis extras to justify the price, improving ultimate performance and pace but narrowing the car's bandwidth in everyday driving. This Polestar Engineered V60 moves supremely well at a canter, majoring on traction and with gilded body control, and there's now a good level of precision in the steering and response in the throttle, but it feels as though the suspension is in part ameliorating the weight of the battery and overall it's simply not exciting enough compared with rivals. It's also too stiff too much of the time for UK roads.

Call me a luddite, but I can't help feel that these Öhlins dampers, fitted to the non-hybrid T5 V60, would have resulted in a similarly imperfect but even more effective, attainable car, and perhaps one more special.

A surpercharged, turbocharged, petrol electric car with pointlessly over complicated and probably fearsomely expensive suspension.  Who'd want the liability of one of these in 5 years and 60 odd thousand miles time.

And how the hell does it weigh over 2 tonnes?

I think it's down on torque, it's not eye popping lay fast either, sorry, even for at this price, I'd be looking at the Audi, the Audi has more cache......

I think it's down on torque, it's not eye popping lay fast either, sorry, even for at this price, I'd be looking at the Audi, the Audi has more cache......

Peter, are you from Birmingham?

Lol, does it ? I spose it does if you like expensive, characterless cars with no steering feedback that understeer.

I would guess that when the

I would guess that when the manual states front and rear Axel's should be set the same it means both front the same as each other and the same for the rear as opposed to your take that it's a contradiction.
Pietro Cavolonero 17 November 2019

What you on about?!?