8
Family hatchback gets electrified with plug-in powertrain. We experience it for the first time on UK roads
Open gallery
Close

This is the Skoda Octavia company car drivers have been waiting for: the Skoda Octavia iV plug-in hybrid, the first time such a drivetrain has been offered in the popular Czech family car that’s made an impressive start to life in its fourth generation.

And we’ll get straight to the killer number: the 43-mile electric-only range, which due to the way the tax bands are structured reduces benefit-in-kind down to just 6%. Thus the annual tax bill for this SE L hatchback model tested will be less than half that of the cheapest diesel (£649 versus £1336 for a 20% tax payer at the current year rates).

Given the government’s recent ban on petrol and diesel cars from 2030, it’s likely more private buyers will now flock into plug-in hybrids too as a gateway to an electric car. With fair winds like these, it’s no surprise to hear that Skoda expects the new Octavia iV to do very well indeed.

Plenty of the new Octavia iV is familiar from other recent plug-in hybrids we’ve tested from the Volkswagen Group, including the Seat Leon eHybrid. Like that Seat, the Octavia mixes a 1.4-litre TSI petrol engine with an electric motor and 13kWh lithium-ion battery pack, driving the front wheels through a six-speed DSG gearbox.

You can have it in hatchback or estate bodystyles, and in SE L or SE Technology trims at launch, while a more powerful version of the drivetrain is offered in a Skoda Octavia vRS iV model we’ve also tested. 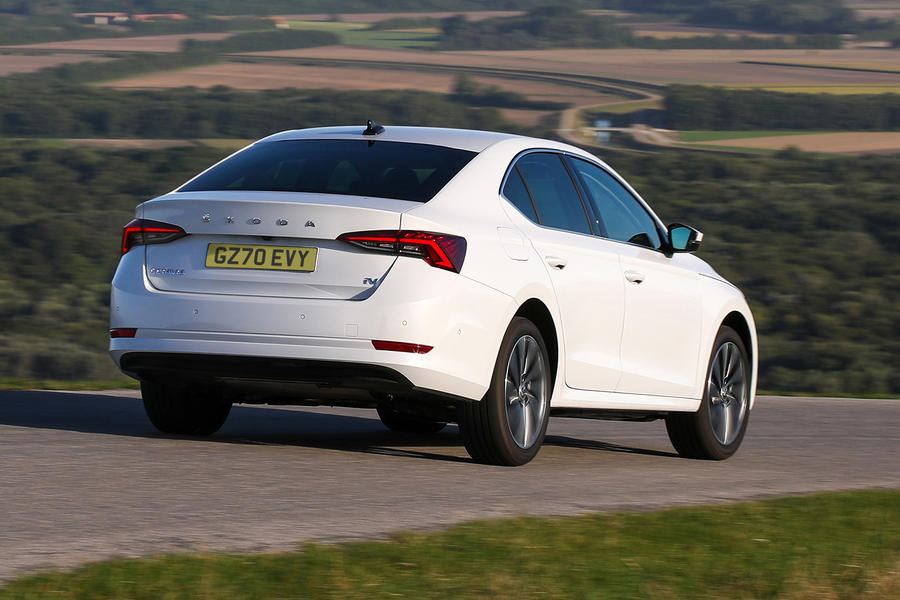 Unlike the days of the low-CO2 diesel tax specials that were designed to slip under the then magic 100g/km threshold, the Octavia iV is not wanting for performance in its pursuit of ultimate tax-friendliness.

It gets peak outputs of 201bhp and 258lb ft, and defaults to electric-only mode at start-up should there be sufficient charge. Select the hybrid mode and power will be best deployed as the car sees fit. On top of that are three driving modes to select through: Eco, Normal and Sport, the former of which saps a lot of power and the latter of which gives you all of it - so much in fact you’ll find yourself spinning the wheels with even moderate throttle inputs and not just off the line, so quickly is the chassis overwhelmed.

Best leave it in the Normal mode, where you can make smooth but brisk progress and transitions between electric and hybrid power is almost undetectable. That transition can be a bit more jerky when slowing down however, and also in more stop-start traffic when the battery is depleted.

Speaking of slowing down, the brakes need a much firmer jab than you initially expect, which takes some getting used to. As does the lack of any real regenerative braking when driven in the Normal mode; come off the throttle and the car coasts along pretty much at the same speed you came off the throttle at, which is a bit disconcerting. Only going down a hill really causes the car to intervene, unless you put it in Sport mode which adds in an aggressive level of regenerative braking.

As for that electric range, on a cold November day we squeezed just over 30 miles out of the battery before it was empty. This is about typical with other plug-in hybrids tested for a drop-off of about 25% in colder weather, so we’d expect a figure closer to 40 miles when the sun comes out again.

Dynamically, this is not a car to engage, and is geared more towards comfort and trying to hide as much of the extra weight as possible. The ride is passable; smooth and comfortable enough when the road is smooth enough but it doesn’t take too many abrasions on the surface to unsettle the car. Push on and all you’ll be met with is body roll and another memory of that extra weight. Gets the job done for its intended purpose, is probably about right in describing it.

The interior is anything but offensive. It’s a real high point of the car, feeling a big step on in both quality and technology for Skoda. It’s comfortable to be in over long distances and nicely laid out, but remember that those batteries in the boot mean a 150-litre penalty in luggage capacity. The 600-litre boot of non-iV Octavias stands at 450 litres here. 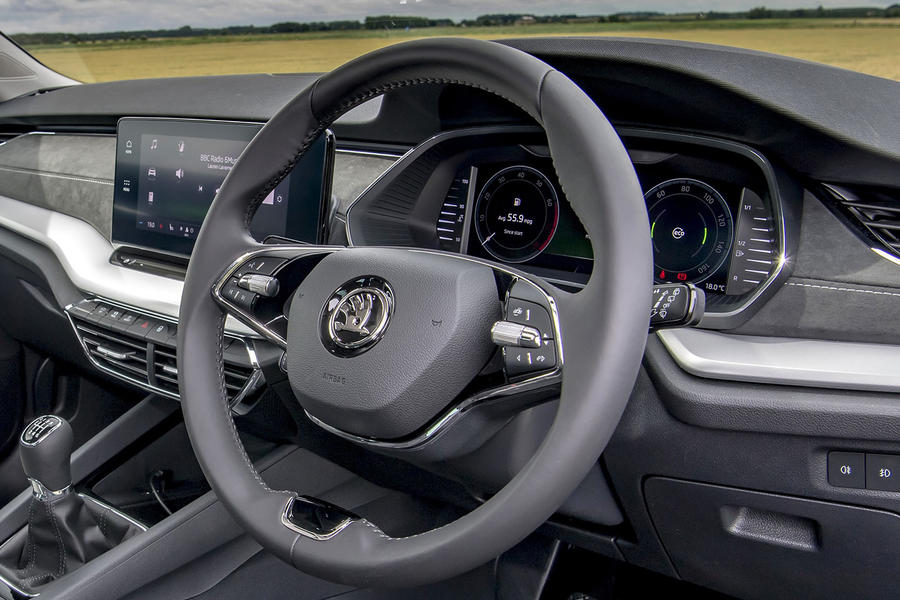 The Octavia iV has its quirks, yet for the most part it is a quiet and comfortable operator, the kind of car you’d think nothing of covering big miles in, from where you’d be enjoying a superb interior.

Private buyers will still likely be better served by a petrol version, but if the sums work for you (and who doesn’t like saving a whole lot of money?) then the Octavia iV is a car that asks for no major compromise in return. Indeed, it’s actually a better car for having less power than the vRS, and much better value, too. 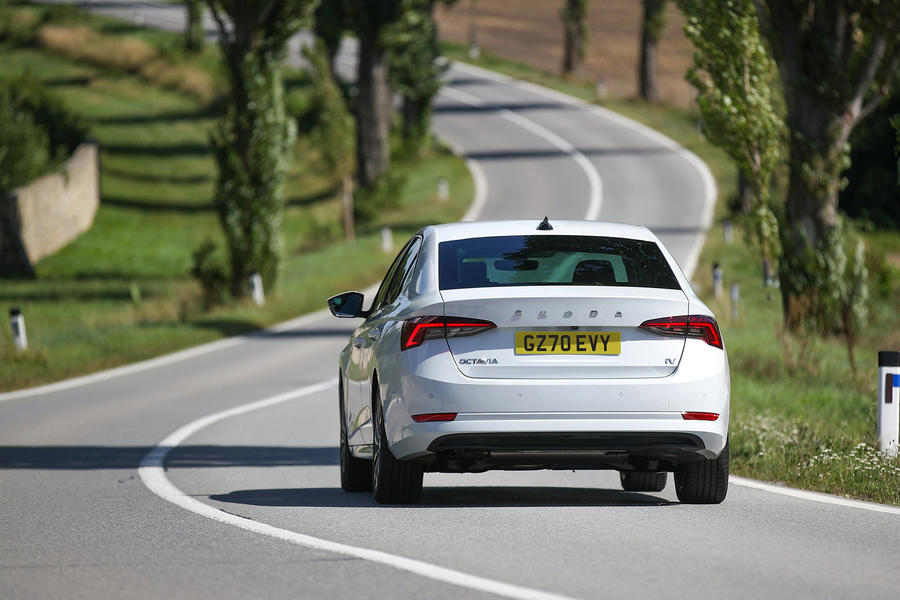 PHEVs are definitely a popular choice with company car drivers, for obvious tax saving reasons.  Certainly  where I work, it's not very straightforward though.  I've a monthly lease cost limit that goes with my grade.  Broadly, this would fund the petrol/diesel Octavia, but I'd pay a pretty hefty amount in Benefit in Kind tax each month.

The iV PHEV Octavia is around £150/month more in lease cost and that extra would come straight out of my pocket, so whilst I'd save on tax, that saving is pretty much swallowed up by the additional lease cost.

Strangely, the similarly priced Seat Leon eHybrid is way cheaper each month on the lease cost.  Go figure, when it's pretty much the same chassis and running gear underneath...?!

Unless you benefit from the tax savings, the IC engine is by far the better choice, but please don't buy it in white!

This PHEV isn't even that much better performing than the IC car, so the only advantage here is you can think you are being more eco-friendly, which in reality you are probably not.