From £26,2957
Can a supercharged 209bhp engine, a Torsen differential and a host of other changes turn the Yaris into a true Mini Cooper S Works 210 rival?
Open gallery
Close

Incongruity: with silent cars from Jaguar, £240,000 'coupés' from Range Rover and sports utility vehicles from Ferrari (even if it won't actually call it an SUV), in 2018, we’re immersed in it.

But none of those things is perhaps quite so improbable as a Toyota supermini that not only packs 209bhp but also puts it to the Tarmac through a Torsen differential with the help of (passive) dampers from Sachs.

That last pair of assets is very much what you might expect of a full-bore, full-sized hot hatch and not something that, in its most basic form, costs a whisker under thirteen grand.

It’s likely the first of several Europe-bound GRMN specials, and despite a narrow appeal, owing to its £26,295 asking price, very nearly all 80 UK examples are already spoken for.

We’ve driven the car abroad already, so know that this supercharged 1.8-litre 2ZR-FE engine – built in Deeside by Toyota, modified by Lotus and then united with its steed in Valenciennes on the Franco-Belgian border – is an engine of addictive character.

Here, it’s tasted for the first time on British roads, which have a reputation for making or breaking the dreams of hot hatch marketeers. We also have a full road test in the works – this will be appearing in the magazine in due course. 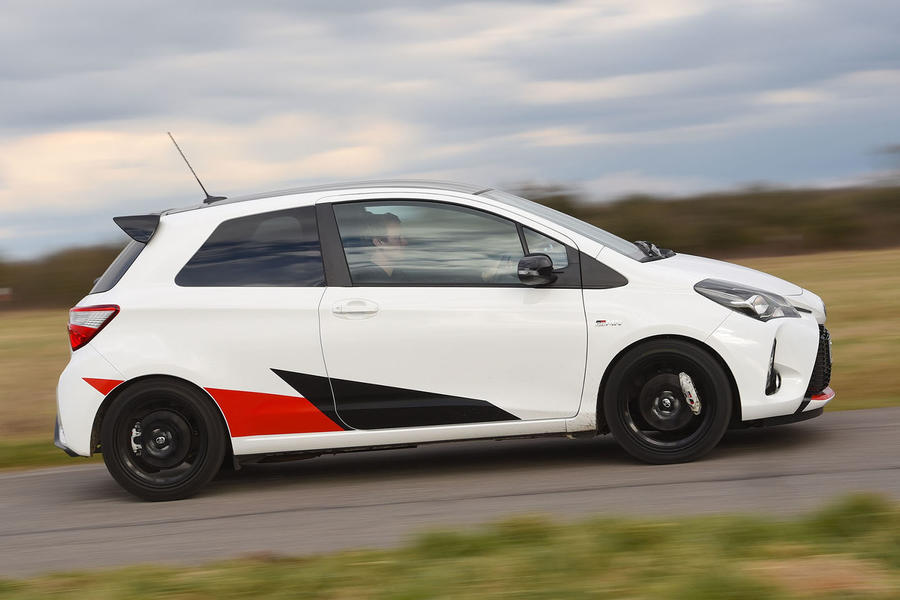 What you notice straight away is that the GRMN's peak power figure of 209bhp doesn’t arrive until 6500rpm, and the ascent to that point is Peugeot delectably linear compared with turbocharged rivals'.

This car really is something special. Fed by the frigid air of Salisbury Plain, the intake hisses at high crank speeds with the intensity of a severely maligned moggy. Lovely stuff. The exhaust is a little nasal, but it sings a tight, dense, angry tune that wholly subverts what you know to be true – that you’re driving a Toyota Yaris.

At this price point, you’d expect the chassis dynamics to match, if not better, what’s under the bonnet. But on British roads, the results are mixed.

The GRMN’s cause is hardly helped by a high-set driving position and a steering wheel with minimal adjustability. The body is tall, too, and thus sacrifices some of the natural agility of hotter Mini Cooper variants. The low-speed ride, meanwhile, can be so brutal that attempting to accurately jab the low-resolution infotainment touchscreen is a uniquely frustrating endeavour.

You quickly forgive that, though, because this Toyota, more so than even the rear-driven GT86, is life-affirming to drive fast. With a footprint that feels almost four-square, you’re dicing with instability much of the time, although the dampers come into themselves with speed and provide magnificent composure. In this sense, the GRMN is not dissimilar to the original Ford Focus RS.

That composure allows you to push refreshingly hard – certainly enough to gently loosen the rears by way of either that limited-slip differential or the satisfyingly firm, high-biting brakes – and to do so with confidence. There is some torque steer, yes, and the front axle isn’t the most predictable companion on British roads, but there’s satisfaction to be had in driving around any issues. As they say, the throttle pedal goes both ways.

On the subject of pedals, they’re slightly wide-spaced in the GRMN, so necessitate proper ankle articulation for heel-and-toe shifts. In truth, this only adds to the sense that you’re in a proper rally refugee. It’s also something that illustrates that getting the best from this supersonic Yaris isn’t as simple as you’d think – but we’ll go into further detail on that in the forthcoming road test.

As for fuel economy, do you even care? Well, for those hardcore enough to run this car as a daily driver, our figures suggest you’ll manage around 26mpg if you’re reasonably well behaved most of the time but prone to bouts of mischief. Also note that the GRMN's 205-section tyres have broadened the turning circle to the extent that at some time or another, you’ll end up making an unforeseen three-point turn – probably in full public view. 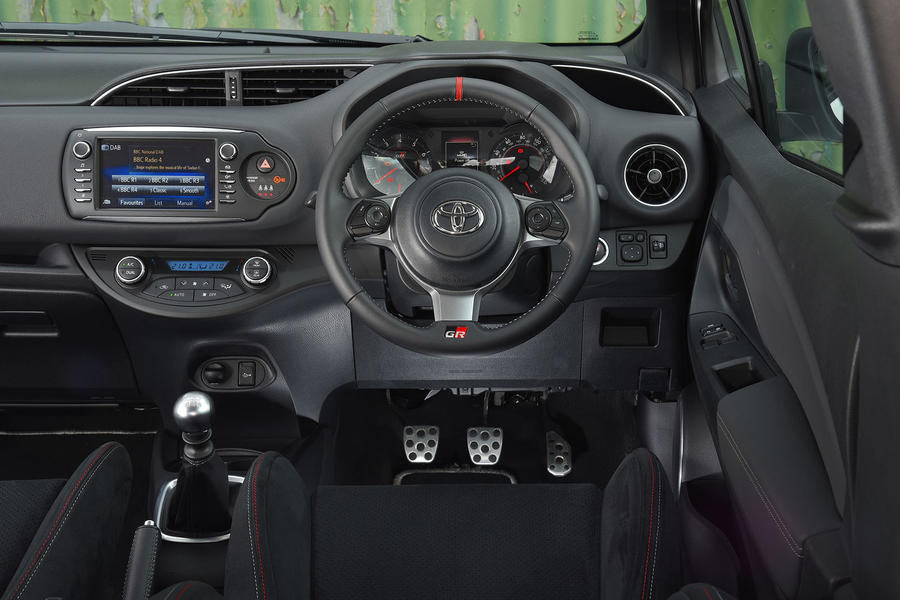 The GRMN is pretty much sold out, so you’ll need to do some digging about Toyota's UK dealer network to get a sniff of a build slot.

There’s also the small matter of the new Ford Fiesta ST – a car for which an Autocar verdict is due imminently and, as you’d imagine, given Ford’s track record, should be rather favourable. Moreover, its asking price is likely to slip below £20,000.

The Mini Cooper S Works 210 – our current pick of the hot supermini market, owing to its sublime chassis – is also in the mix and is positively useable in comparison to the small, unforgiving GRMN.

However, to an owner, we suspect neither of those rivals will feel quite as special or as wonderfully uncompromising as this steroidal Toyota Yaris. And so, outrageous as Toyota’s pricing strategy is, we’d understand the logic of anybody who shells out. In fact, we’d applaud it. 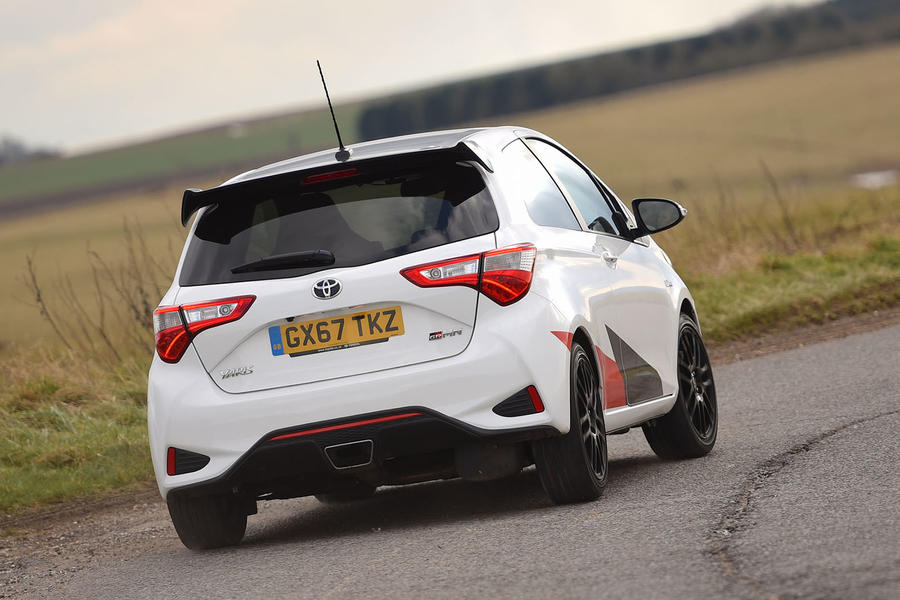 Some u oafs in here may remember me from posts going back a bit. Rallying first with rear wheel drive Starlet ( biggest hoot ever even trashed Cossies on tarmac.mountain stage) progressed to rear wheel drive corolla + great car, and finally frint wheel drive corolla. Why? Because in 12 years over 100 races unlusing the acropolis never had mechanical failure of any kind. Thus Yaris is going ti he a clubman's tool. I would love one
xxxx 13 March 2018

Given that you appear to assume that we all require reminding about fucking Norway every half-hour, I'd say that two weeks between rally mentions is pretty respectable.

This is what's known as product placement.