BACK TO ALL NEWS
Currently reading: Toyota Yaris GRMN prototype review: can it rival the Ford Fiesta ST?
UP NEXT
Fisker goes radical with Pear EV SUV

Toyota has produced a sporty Yaris to link its road cars to its world rally assault. Dan Prosser finds out if the 210bhp hot hatch is on the right track
Open gallery
Close
News
by Dan Prosser
4 mins read
Share

For the past 20 years, car manufacturers competing in the World Rally Championship haven’t really known how to draw a tangible link between their road cars and their mud-splattered competition machines.

Not since the late 1990s have they been required by the rules to build road-going versions of their special stage weapons, which has meant that, for the most part, rally cars and road cars have shared scarcely any DNA.

The Yaris GRMN has been revealed

The Toyota Yaris GRMN is Toyota’s attempt to make the bewinged beasts that fly over Finnish crests at 100mph seem more closely related to the showroom models. Unlike its rallying sibling, however, the Yaris GRMN isn’t four-wheel drive, it doesn’t have bundles of power and it isn’t particularly fast.

To you and me, GRMN is as unfamiliar as it is clumsy to say aloud. It has actually been around in Japan for several years already, but now Toyota is launching the performance brand in Europe. The badge will be reserved for its sportiest, range-topping models. Toyota won’t confirm anything for the time being, but GRMN versions of the GT86 and forthcoming Supra might well be on their way to Europe.

Those four letters stand for Gazoo Racing Meister of Nürburgring, which probably sounds more poetic to a native Japanese speaker than it does to the rest of us. Gazoo Racing is the in-house division that runs Toyota’s LMP1 programme, while ‘Meister of Nürburgring’ refers to the Nordschleife wizards who will test and develop the cars, working partly out of the company’s permanent facility near to the ’Ring. 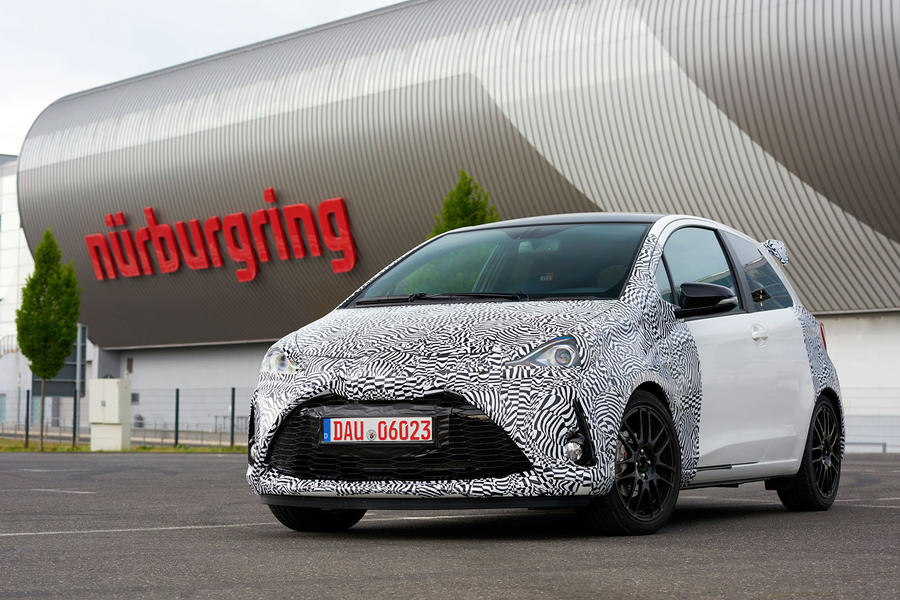 The Yaris GRMN will be limited to just 400 units in Europe, with no more than 100 coming to the UK. It will cost £26,295 and uses a 1.8-litre supercharged four-cylinder that will develop about 210bhp. Toyota’s stated objective for the Yaris GRMN is bold: for it to be the lightest, fastest and most powerful car in its class. It remains front-wheel drive, although the body structure has been stiffened and the springs and dampers are bespoke. There is even a Torsen limited-slip differential.

“Every single day people told us this project was too challenging,” says project leader Stijn Peeters. “They told us to stop, but we always had the support of the management.”

Nonetheless, a company the size of Toyota is simply not structured to develop, build and sell a very limited-edition car that’s so different to the base model. Inflexible long-term product strategies and factories that are run with millimetric precision don’t leave much room for short-run projects like this one. In fact, for Peeters and chief engineer Yoshinori Sasaki, the entire project has been a battle from start to finish. You get the feeling that had they pitched four-wheel drive and 300bhp to the board, the idea of a Yaris GRMN wouldn’t have survived the first meeting.

Production won’t begin until the end of autumn, which means the car isn’t quite finished yet. Even at this prototype stage, though, it is a huge amount of fun to drive. The Sachs dampers are fixed rate and there are no complicated driving modes or adjustable parameters. The exhaust barks out a snorty, tinny tune, rather than the contrived parping and popping score that accompanies so many small hot hatches. The Yaris GRMN is brilliantly simple. 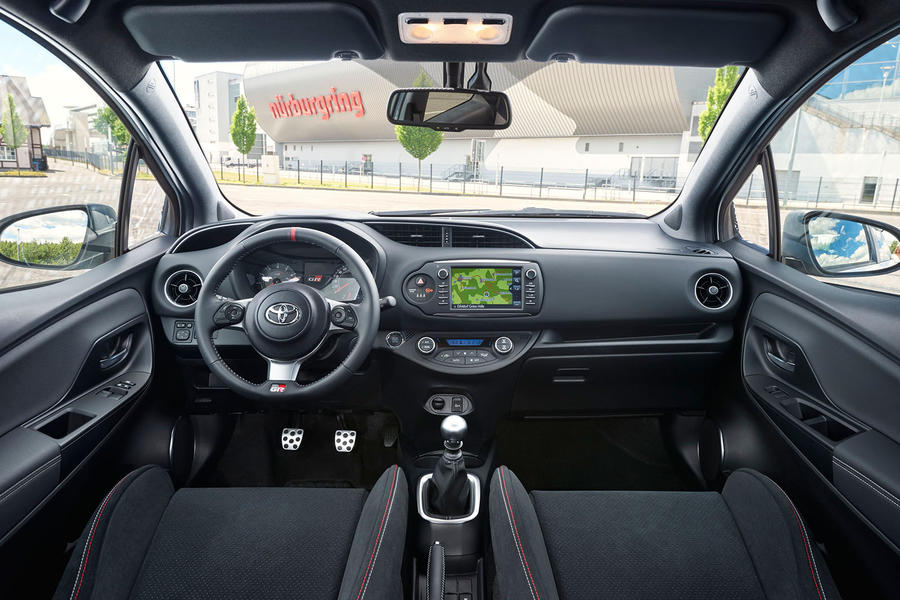 The specially developed sports seats offer lots of support, although they’re set a little high and the GT86-sourced steering wheel doesn’t extend quite far enough. The pedals are also spaced a little awkwardly for heel and toe downshifts. Those things are all determined by Toyota’s unbendable global standards, which means the engineers’ hands were tied. In some ways, an independent garage would be better placed to build this sort of car.

The chassis is just about as focused as they come in this sector. It feels firm, with lots of support at each corner, but there’s enough quality in the damping to deal with most road surfaces. It’s properly taut, this Yaris; it feels just a set of knobbly tyres and some bucket seats away from being a junior rally car. 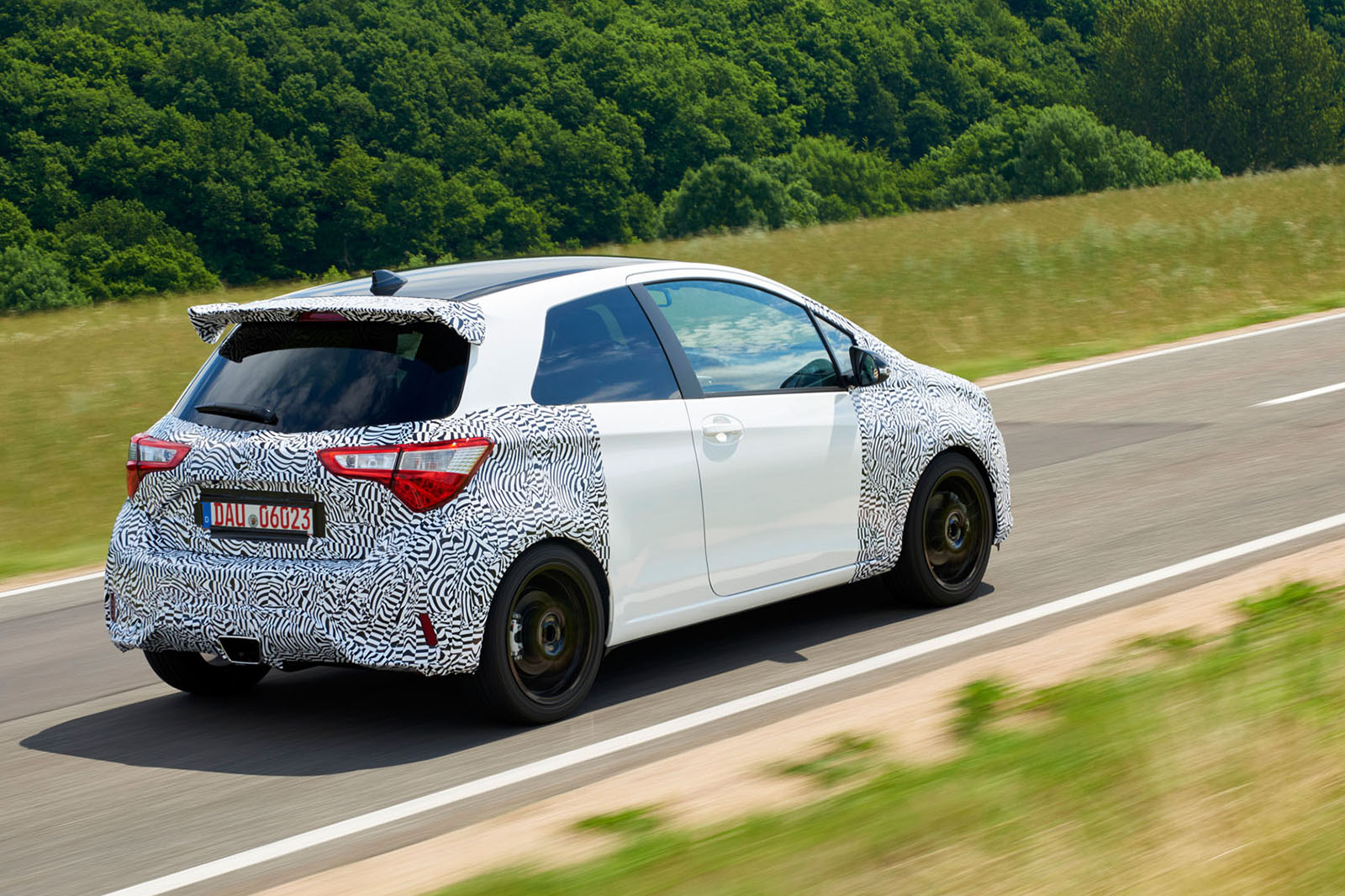 The Bridgestone tyres don’t generate huge grip, which means the car’s limits are well within reach on the road. That makes it a real blast to drive but, before too long, those modest grip levels might well become a frustration. It might not deliver the strong, boosty acceleration of a turbo unit, but the supercharged engine feels potent enough and very sweet. It also offers instantaneous throttle response, which no turbo engine does, while the LSD works subtly but effectively to give good traction away from corners. The manual gearbox is reasonably snicky, the steering is decent enough and the four-pot brakes feel strong.

No matter the price, driving doesn’t get a whole lot more amusing than this. The Yaris GRMN isn’t the lightly detuned WRC monster some will have been hoping for, but it’s a very promising hot hatch.

Love the simple black interior, less distraction from driving, shame about the shiney plastic around the tailpipe.

Would make a great stealthy / Q car if the bodykit is fairly subtle.  Like the concept of a small but (relatively) powerful car like this.  Also glad they aren't calling it a Kazoo either.  They should have just gone for GR though rather than GRMN.

They should re-introduce this rule to WRC. I miss great 4WD japanese rally cars like the Celica GT-Four.