From £63,495
The new electric SUV promises to have a seismic effect on its maker's bold future strategy, and our first short experience behind the wheel augurs well
Close

The Jaguar I-Pace, the British manufacturer’s revolutionary battery-powered ‘performance SUV’, first appeared as a concept at the Los Angeles motor show in 2016 – and we've also driven an early version – but in the 15 months since, the two most important questions about the car have not yet been answered.

First, is it a real Jaguar? Second, does it drive like one? On the outcome of these twin examinations rests the success of a huge investment in design and engineering, not to mention much of the company’s bold future strategy, namely to excite and inspire buyers with the finest modern technology, just as it did 70 years ago in the extraordinary post-war period that produced the XK120 sports car and a string of fabulous saloons that led to the seminal XJ6 of 1968.

We were given the first answers to those burning I-Pace questions as a prelude to the Geneva motor show when Jaguar fenced off a piece of taxiway at the end of Geneva’s busy airport and set up what amounted to an autosolo course of 'smart cones’ designed to indicate the desired handling course only at the last second, so drivers needed every ounce of the car’s agility to follow it.

This wasn’t a test drive per se, but it was a decent first chance to slip behind the wheel, and the kind of opportunity to test the car’s near-limit responses – conferred by a sophisticated all-independent suspension and an ultra-low centre of gravity – that you probably wouldn’t get in 1000 miles of driving on normal roads.

It’s worth reiterating the risk Jaguar is taking with such a rule-breaking model: it is deliberately ditching the long bonnet, short boot proportions of nearly every successful Jaguar model in favour of a short bonnet, cab-forward design. The logic is irrefutable: there’s simply no need to make space for 350kg of rubber-mounted metal in the nose. Two much more easily accommodated 80kg motors take the conventional engine’s place – one front, one rear – so why not use the space for carrying people?

For the first time, a Jaguar must do without a great-looking internal combustion engine – perhaps with a heritage of its own – and the accompanying sound of combustion, in the past painstakingly engineered to please an owner’s ear. Now, the I-Pace has silent electric motors mounted at either end of a skateboard chassis, the pair contributing 395bhp and 513lb ft to give the car 0-60mph acceleration in 4.5sec. 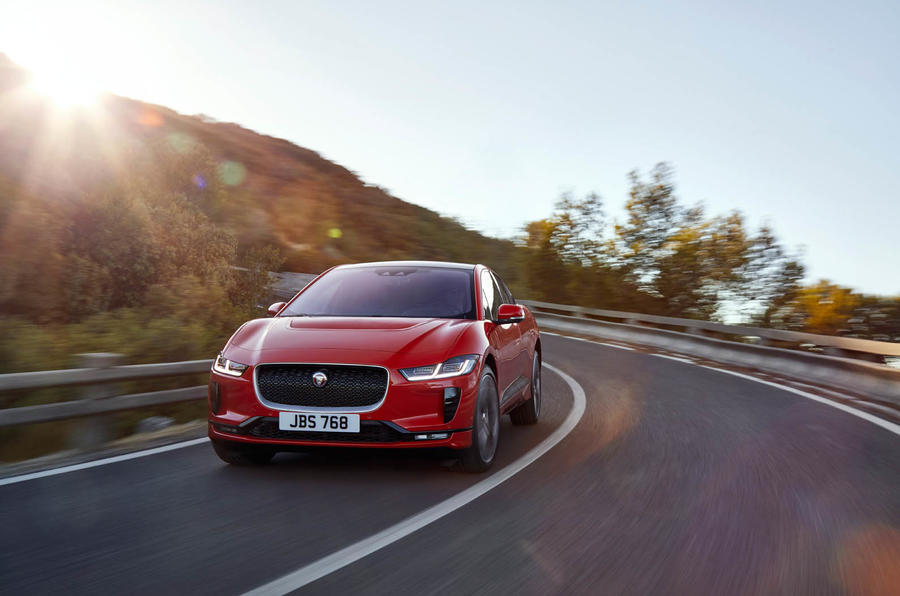 For a while, I watch others drive, noting the reluctance of this long-wheelbase, ultra-low-centre-of-gravity car to roll its body, or slide, or do anything very much except squeal its tyres in extremis and go where it is steered. It does indeed change direction brilliantly – you can see that with the naked eye – helped by the fact that its torque vectoring system can send more than 90% of torque to the rear axle for a proper rear-wheel-drive feel.

I settle in the driver’s seat, noting the quality of the materials, double stitching here, tastefully co-ordinating colours there. The brightwork is of high quality, the switches and two prominent and all-important central rotary knobs very pleasing to touch. The interior feels less radical in detail and colour than what I remember of the concept, but the architecture is very similar.

The upper slopes of the big centre console are largely covered by two large but well integrated screens (sat-nav and audio above, ventilation controls below) and there’s generous space behind it for equipment plus a convenient hand-sized hatch to access it from the centre. I’m sitting in what are called ‘performance seats’ which, of three seat designs, are most reminiscent of those in the original concept car.

Everyone keeps insisting, however, that these are prototypes and the finish will get better. Magna Steyr, which is the I-Pace’s manufacturer in Graz, Austria, has just begun making cars for production, but these won’t be in dealers’ showrooms until the summer.

There are three regular trim levels – S, SE and HSE, ranging in price from £63,495 to £74,445 (before government grant) – but ours is an £81,495 First Edition (which has special paint, equipment and trim and will be made for a year). We also have the optional 22in wheels which engineering manager and I-Pace guru Dave Shaw reckons best show off the handling.

It’s time to drive. There is no noise or auto-style creep, although you can choose the latter from a huge range of driving options if you desire. We glide off the mark like no combustion car ever did, then accelerate to the first obstacle cleanly and strongly. Instantly, the extreme faithfulness of this car to control inputs is clear. This is a tight course, so very soon we’re jinking and accelerating and regen-braking constantly. You can get 0.2g of retardation from simply coming off the accelerator, and another 0.2g from initial use of the brake pedal, so in most situations you hardly need friction braking at all.

The steering wheel feels big for tight manoeuvres like these, but the driving position is perfect: a fairly high wheel, plenty of seat bolstering and under-thigh support, an ideal instrument view, and the response to lock is accurate. Even here, with tyres screeching and the car always turning fast, Shaw’s words about the I-Pace’s torque distribution ensuring “uncorrupted” steering come back to me. The weighting is just right for serious driving, not merely convenient parking, and I’m surprised how little this body rolls. That’s a function of the low-mounted battery, I’m told, and the centralisation of the major masses.

In most derivatives you get conventional steel anti-roll bars (accompanying steel coil springs) to handle things. The low centre of gravity means they don't need to be as intrusive as many. On air suspension models – which offer three ride heights that vary over 90mm – the quick-acting air suspension units help control roll too. As for grip, there’s plenty on the airport’s slow, non-slip tarmac, though off throttle the car tightens neatly in bends, especially when its maximum regeneration setting is engaged. This is only a five-minute drive, albeit an action-packed one, but the impressions I take from it are the I-Pace’s accuracy and precision. 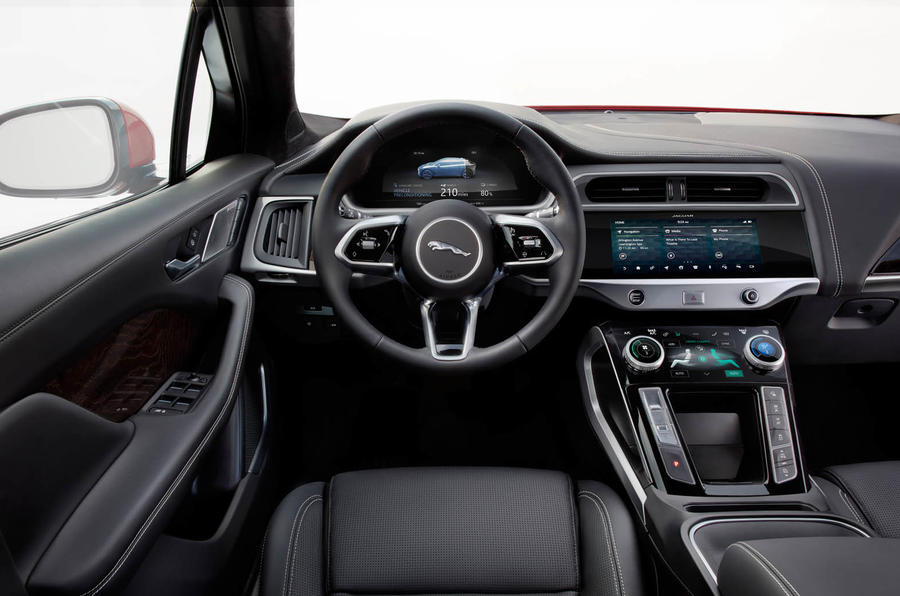 The burning question on the strength of our very short drive is: is the I-Pace a real Jaguar? It certainly feels like one. It’s different, but so most cars will be in future, and it still feels authentic. The refinement seems deeply impressive and, given the decor, the seat comfort, the room and the responses, I have no trouble feeling I’ve been at the wheel of a proper Jaguar.

It’ll take proper journeys – city commutes by time-poor business drivers and inter-capital dashes by discerning comfort-lovers – that will prove this car, not an engaging but slightly daft exercise like ours that no owner will ever repeat. But so far? Grace, space and pace – I’ve felt them all. 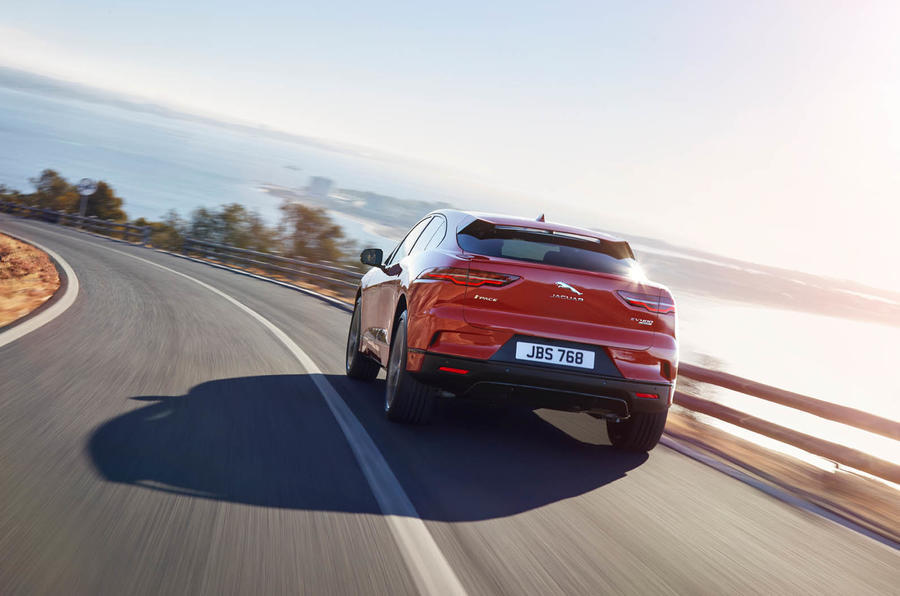 Why? People will pay for new tech, and this is new.

Compared to its only real rival, the Tesla, it looks competitive at the very least.

Why? People will pay for new tech, and this is new.

Compared to its only real rival, the Tesla, it looks competitive at the very least.

What's new about it?

Its not 1990 anymore. Quality cars cost. As do decent electric cars. This was never going to be Golf money.

Its not 1990 anymore. Quality cars cost. As do decent electric cars. This was never going to be Golf money.

Exactly, its cheaper than an equivalent Model X, by a large margin, but I suppose people are paying for the geeky doors on the Tesla.

Exactly, its cheaper than an equivalent Model X, by a large margin, but I suppose people are paying for the geeky doors on the Tesla.

The Model X is a much bigger car - 7 seater, or 5 seats & huge boot. Apples & oranges. The new electric Nissan Qashqui (Jap/British built, unlike the Jag) & the (USA/Dutch) Tesla Model Y, both due next year will be about the same size of car & cheaper to avoid the £40k tax bracket, but probably not as classy as the Indian/Austrian Jag.

There's no doubt that the automotive world is going all electrice.   Now we have Jaguar creating an electric SUV from a clean sheet design.   What they've ended up with is stunning.

Not following old Jaguar design cues?   That's because it's leading the way, not following.

Make no mistake.   This is a proper electric car and probably the first one from a proper automotive manufacturer.   Not some halo-concept.   Not quirky toy.   But a real-world SUV, but electric powered and elminating the packaging you need for an internal combustion engine.

Remember £4.5k to come off that price - same acceleration as Bentley Continal GT - plus much more space & 5 doors.

Factor in an EV's much lower running costs and I would say it sounds a bit of a bargain to me.

I still think the best

I still think the best looking Jaguar of all time is the Mark X.

The Mark X set a styling precedent for Jaguar that lasted for 50 years but one that was, in my opinion, never bested.

The article refers to the risk Jaguar is taking with this vehicle. Jaguar is a company that is inherently reliant on the Internal Combustion Engine. They have designed their cars around it with their beautiful long-bonnet proportions and the emphasis has always been on the engine and it's characteristics.

I fear that Jaguar will struggle to replicate the concept of Character, that has been essential to their brand, in an electric vehicle.

My hope is that Jaguar can find a place for itself in the seemingly all electric future which we now face. The styling of the I-Pace is a good start as it turns conventional SUV proportions on their head.

I just hope it doesn't signal the death of the 'long bonnet' as beauty, once again, gives way to practicality!