From £24,9956
Hybrid power isn’t enough to bring this niche crossover into the mainstream, but it remains more capable than its rivals off-road
Open gallery
Close

Subaru dealer forecourts may have long bid goodbye to saloons that could profess to be World Rally Championship winners, but the permanent Symmetrical All Wheel Drive system they helped establish has now become a key part of the brand’s SUV range.

That includes the compact Subaru XV, making this one of the few crossovers that actually has some semblance of ability away from the asphalt - a claim to which it can now add the economy-boosting benefits of a hybrid powertrain.

After the axing of the boxer diesel engine back in 2018, partly in response to the shifting public opinion on filling from the black pump but mainly down to the cost of reengineering to meet WLTP emissions standards, this battery-assisted petrol flat-four is now the most efficient model in the XV line-up, promising a combined 35.8mpg.

It pairs a 16bhp electric motor and small battery to the familiar naturally aspirated 2.0-litre unit, sending power to all four wheels through a CVT automatic gearbox.

The XV is otherwise the same capable, well-equipped crossover as before, complete with Subaru’s extensive Eyesight driver assistance system and a fairly extensive standard kit list in SE Premium trim.

We tried a left-hand-drive car in Latvia late last year, but this was our first opportunity for a longer test on UK roads. 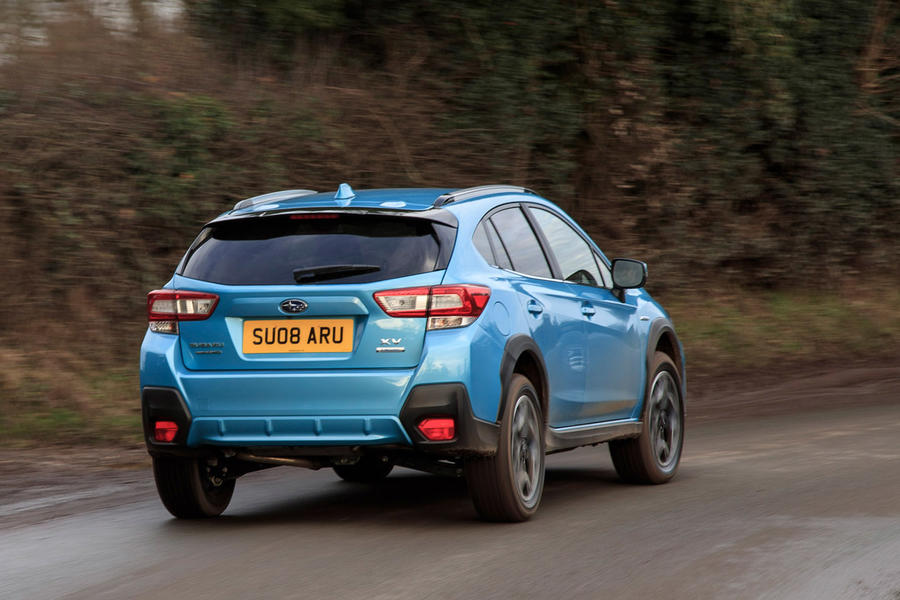 The hybrid is as surefooted as the standard petrol XV, although the focus has very much been on its ability to adapt to the terrain beneath than any kind of driver engagement. It steers with precision, but it can’t claim to be as dynamic as some rivals, with none of the lateral grip or dynamism found in the Seat Ateca or Volkswagen T-Roc.

Instead, it excels with its damping, delivering a largely comfortable ride that copes well with bumps and road imperfections in a way that bodes well for when you need to cross a muddy field or rocky trail - or simply want a car that can cope with Britain’s pockmarked roads. With 220mm of ground clearance and that four-wheel drive system finding traction, it should be able to go where few other crossovers can.

The interior feels built to a reassuringly tough standard, so while there are plenty of plastics, both hard and soft, they should survive more abuse than some rivals'.

The 8.0in touchscreen infotainment system lags behind, though, with dated graphics and sluggish responses. At least Android Auto and Apple CarPlay come as standard and are much more reactive. A second screen above shows when adaptive cruise control (complete with over-eager lane-keeping assistance) is in use or what the powertrain is doing at any given moment.

For the most part, it won’t be doing very much. Electric-only driving is rare, and with only 17bhp to move more than a tonne and half of car, it’s probably sensible that there’s no EV mode available at the push of a button like there is in most Toyota hybrids.

Electric assistance doesn’t have much impact on off-the-line performance, and with peak torque delivered at 4000rpm, the engine needs stretching to make any significant progress. The CVT, meanwhile, is quick to flare up the revs, which makes for noisy long-distance journeys.

In city traffic, you can expect only a few seconds of engine-off driving, and even then you’ll need a particularly light foot. When the engine does cut in again, it’s impossible to miss as it jostles the car forward. The Toyota C-HR is much more refined. 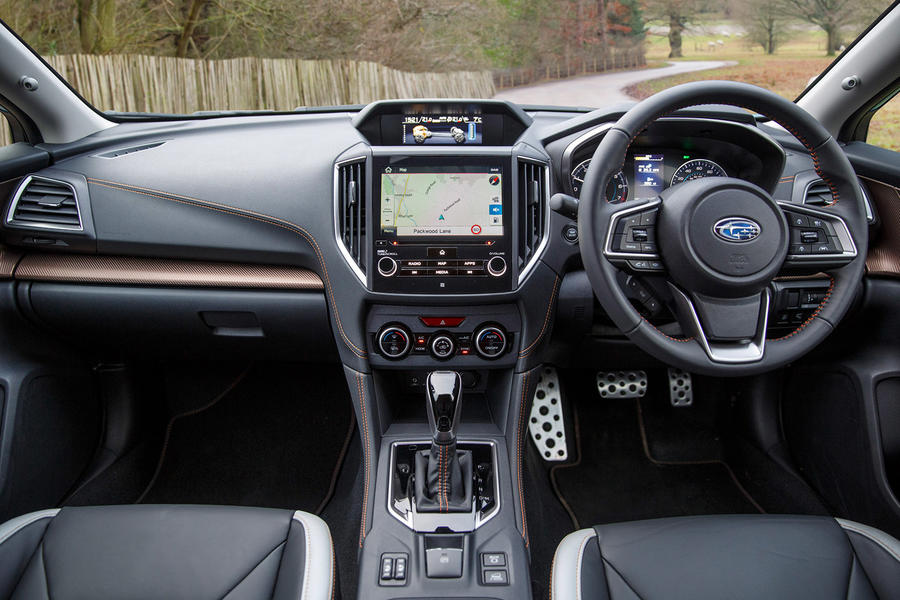 The XV was already a fairly heavy crossover on account of its four-wheel drive system, and Subaru’s implementation of hybrid power doesn’t do enough to offset this when compared with more mainstream rivals.

We typically saw touring economy figures dip below 30mpg during our test, suggesting you’ll need to adapt your driving style to really get the best from the electric motor - and even then you’d be looking at fuel bills higher than with rivals. The dated infotainment and sometimes invasive driver assistance systems can frustrate as well.

That said, the XV e-Boxer is well equipped for the price, while its off-road credentials are sure to appeal to the small subset of UK customers who will actually make use of them. 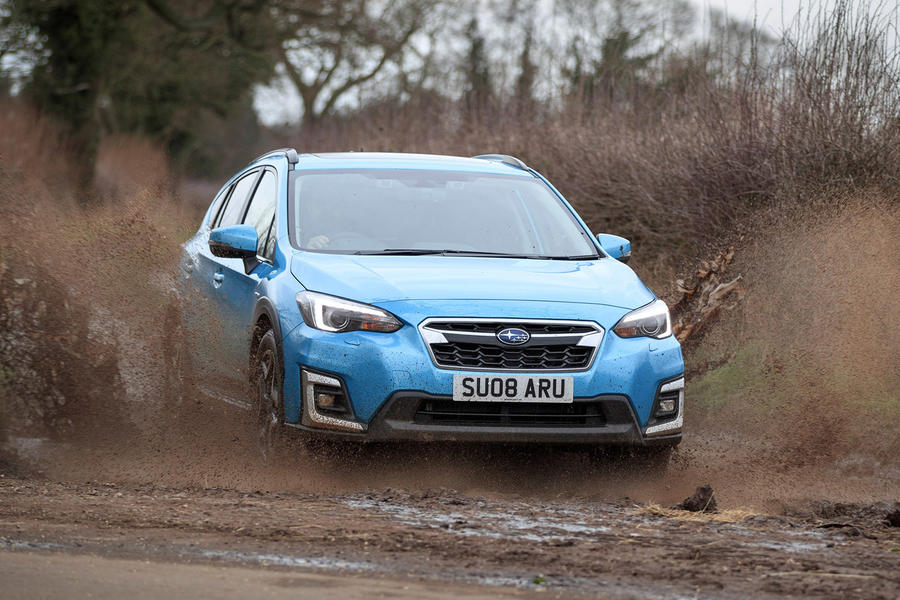 I have a 2018 version of the XV, having moved from Honda after more than 40 years since they do not make a suitable replacement for my 20 years old CR-V (the current CR-V is the size of Texas, and the HR-V is not imported in 4x4 guise).

Having driven it in all conditions for almost 12 months, on all variations of road surfaces and in all weathers including snow I can say that I am absolutely delighted with the car. Apart from the feel of a superbly-engineered vehicle with excellent fit and finish inside and out, the ride and handling are excellent and I find the drive-train, including the Autocar-maligned 150bhp engine and perfectly-matched CVT  responsive and brisk enough to give safe overtaking and decent cruising at motorway speeds ( and I am not talking about 60mph in the nearside lane!). I also particularly like the growl that the boxer engine gives under acceleration, and the CVT is prefectly matched, and NEVER noisy or intrusive.Fuel consumption even driven at brisk speeds is 35+ mpg , more than 50% better than my similarly specced CR-V. In fact it it difficult to discerne from the sound it is not a conventional auto box, although I prefer this iteration of CVT because it gives totally smooth gear transitions, with the  added bonus of clutchless manual changes that are very useful for getting just the correct balance through more demanding bends. Most of the time it stays in drive, and somehow seems to be perfectly matched to all my normal driving. I have driven previous Honda CVT gearboxes, and find this a vast improvement.

So I really cannot recognise the car the Autocar team tested as the one I own and love. Having enjoyed many decades of very well engineered Honda cars of all types and generations I am delighted that I may be starting a similar relationship with Subaru. Just test drive an XV yourself rather than being put off by Autocar-you will not be disappointed.

A vehicle like this, which will be bought by people who genuinely need off road capabilities, as opposed to driving around cities, really ought to still have a diesel option.

Based on this review it's far from an awful car. It's well built, likely to be reliable, it rides well, it's well equipped and good off-road. Overall maybe not a great small SUV, but like I said, far from awful.

Based on this review it's far from an awful car. It's well built, likely to be reliable, it rides well, it's well equipped and good off-road. Overall maybe not a great small SUV, but like I said, far from awful.

Sounds awful to me for £33k, but as I said good off-road.