As a writer, who writes about cars, there’s nothing better than getting stuck into the technical details of the latest new model. Genuinely, I really like absorbing the patter of an esteemed engineer talking about how he and his team have shaved 3 grams from a car’s weight by making the suspension out of myrrh, or boosted efficiency after hours spent artfully prodding the CAD machine to create the perfect piston swirl effect.

For those of you that like reading about such things, sadly they’ll be none of that here. This is the Skoda Yeti Drive, and there’s not a single new exotic material or any cleverer combustion alchemy employed. But you get more kit, which is some compensation.

First, let’s explain that Drive is like a spec-boost for the Yeti’s two most popular trims, so there’s an SE Drive, which we’re told adds up to £2295 worth of extra equipment for a £935 premium over the regular SE, and SE L Drive, bolstering the standard SE L trim with another £1850 worth of goodies for just £755. That last one is what we have here. 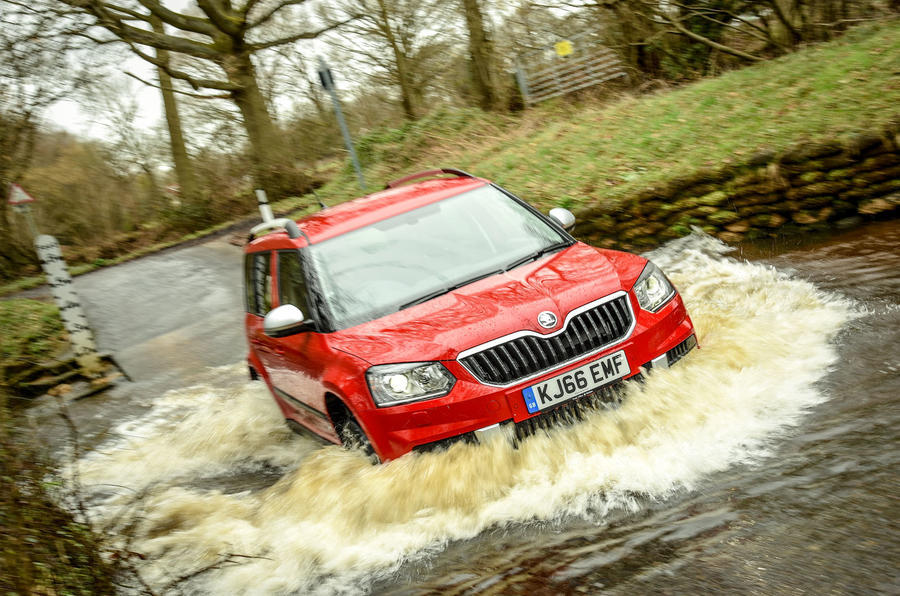 What do you get? Well, SE Drive adds sat-nav and a DAB radio, heated front seats and a heated windscreen, auto-dimming rear-view mirror, special 17in 'Matterhorn' alloys, new seat trim and front parking sensors to go with the rear sensors the SE already gets.

Meanwhile, this SE L Drive trim has all that plus leather seats, bi-xenon headlights, LED taillights, 17in Origami wheels and silver roof rails.

If you are tempted by all those Drive-spec bonuses, what are your engine options? Well, you have three: a 109bhp 1.2 TSI petrol or two 2.0 TDI diesels, with either 109bhp or 148bhp. We’re driving the latter, fitted with a six-speed manual gearbox and four-wheel drive.

With no technical changes, as you’d expect, on the road it feels like any other Yeti with the same drivetrain. That’s a mixture of good and bad, but mainly good.

Judging by the clatter it makes, you wouldn’t think this is the same engine that motivates quietly other VW Group products; in the Yeti it’s coarse and rattly from cold, and even though it gets smoother with every degree increase in coolant temperature, even at the normal 90-deg Celsius it’s less than sweet. But the Yeti is a relative pensioner these days, having been around since 2009, so it’s hardly surprising there are areas where it comes up short. 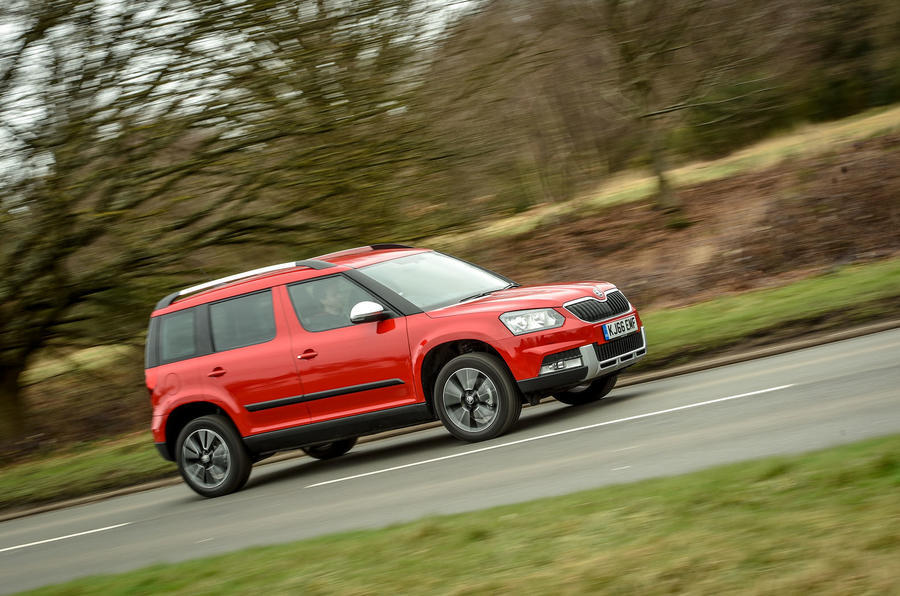 The motor feels strong though, even if 0-62mph in a smidge over nine seconds might not allude to it. Thank the healthy 251lb ft-band of torque that the 2.0 TDI 150 musters all the way from 1750rpm to 3000rpm, giving enough pick-up in any gear to rarely leave you wanting. Not that changing gear is a pain. As is the tradition with Yetis, the action is light and the clutch positive, making milling around town as pleasurable as such environs allow.

Excellent visibility helps here, too; relatively thin windscreen pillars – by SUV standards - plus that boxy back end and the big windows help make parking as stress-free as possible. All-round parking sensors, of course, play their part in this as well.

And it’s wieldier than a tall SUV has the right to be. In fact, back in the day, the Yeti was one of the sportiest of all the SUVs. That's still the case, despite rivals such as the Seat Ateca muscling in on its act; the Yeti still steers accurately, grips hard and leans less than many of its rivals. The payback for the tight body control is a brittle ride over rough town roads, although it smoothes out as the speed increases.

For a car of such relatively diminutive proportions, the Yeti manages its family duties admirably. Front-seat space is good, even if the stunted steering wheel reach adjustment leaves you with a slightly uneasy driving position. Rear leg room is a little tight for anyone tall sat behind someone similarly lofty, but head room is great and that tall glass area keeps the atmosphere airy. 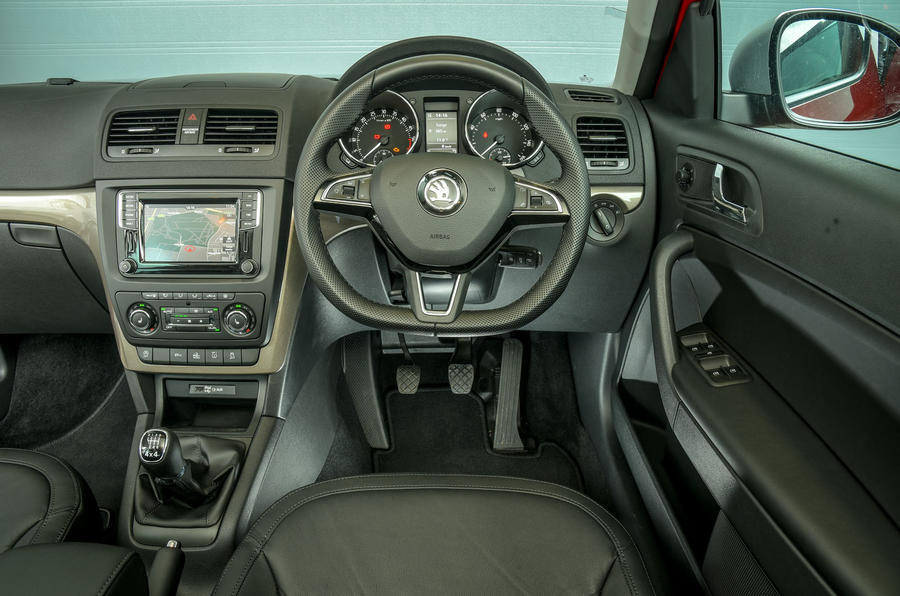 The boot, of course, offers lots of options, with good space in five-seat mode that improves if you slide the rear bench forward. It's even better still if you drop the 40:20:40 split-folding seats, becoming properly van-like expansive if you remove the rear seats altogether, which you can.

Negatives? Well, the almost retro switchgear from long-gone VWs and the outdated infotainment with its fuzzy screen, like the engine refinement, are a big hint that the Yeti's 2018 replacement won't be far off.

It’s getting on a bit but there’s still lots to admire about the way the Skoda Yeti drives and the practicality it offers. Meanwhile, this SE L Drive trim offers luxuries and gadgets that should spike the neighbours with some jealousy.

Here comes the ‘but’ though: £26k seems a lot for an old design. Keep it cheap and the Yeti is a steal, but for that sort of money you can have exactly the same powertrain and four-wheel drive system in a Seat Ateca; only a fool would argue that isn't a better, more up-to-date car in terms of refinement, features and feel.

All fine with this review except from the pricing info which is misleading. Not sure about the pricing in UK but in Europe there are serious discounts when you go to order this Yeti spec. For £19,000 one can buy Yeti Outdoor 4x4 2.0 TDI 148 bhp with New Adventure package which includes most of the features. For another £1000 you may change the Bolero radio with Amundsen Sat Nav and add front parking sensor (as the package includes only rear parking sensor by default). The above calculations show that the price mentioned in the review (£26,000) is more that 25% higher compared to the actual price that you get when ordering the new car from the Skoda dealer. Well, as I have mentioned, the pricing I am talking about is in Europe but I doubt it that there is such big price difference in the UK. With £19,000 price for this spec I think that Yeti provides best value for money in the small SUVs segment. The fact that this model is almost unchanged from 2009 guarantees reliability of the engine and the car as a whole as they have fixed all initial bugs in the model. Of course, the buyer of this car has to be OK with the design, which undoubtedly is outdated.
Deputy 3 March 2017

I had a Yeti. One of those cars you really miss when it's gone. Short enough to park easily in town but with a large square boot and sliding seats for loads of room. Fun to drive yet more than good enough to launch a boat trailer down a rocky beach. I'll certainly be looking at the replacement in 2018.
si73 3 March 2017

Way too expensive but an ex demo/ pre registered would probably be a good buy, it is still a good car and at the right price I think a worthy purchase.
View all comments (11)