BACK TO ALL NEWS
Currently reading: Taking the Skoda Yeti on an epic journey through Bhutan
UP NEXT
Testing the UK's newest circuit in a Porsche Cayenne Turbo GT

Taking the Skoda Yeti on an epic journey through Bhutan

We take a humble Yeti through the Kingdom of Bhutan, via the infamous ‘death road’, in search of the mystical creature with which it shares its name
Open gallery
Close

There’s a traffic jam of humongous trucks in front of me, and I’m teetering between a landslide of rocks and a sheer drop off a towering cliff, adamant that I won’t be reversing.

And so begins my journey in the Kingdom of Bhutan, at which we arrived by the most grandiose border point I’ve ever seen: a golden gate befitting a kingdom, opened on command to let our convoy of Skoda Yetis through.

This article was originally published on 20 November 2016. We're revisiting some of Autocar's most popular features to provide engaging content in these difficult times.

You’ll be familiar with the Yeti, that boxy, Marmite-styling SUV launched in 2010 and one of the early contenders in a now swamped segment. But despite fresher cars such as the Kia Sportage and Nissan Qashqai, Skoda is still keeping up; it sold more Yetis in the UK in 2015 than ever before. 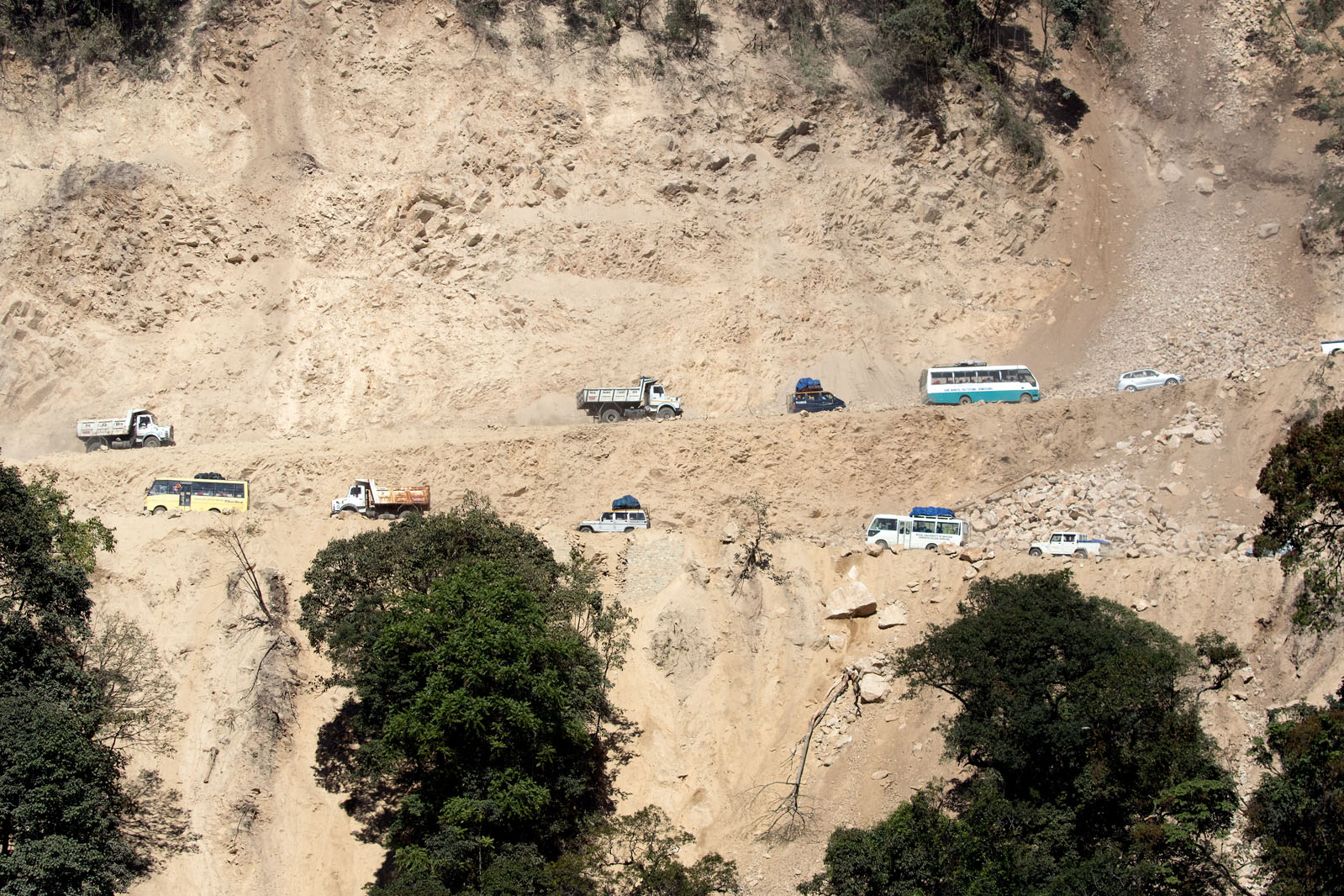 So what exactly am I doing in Bhutan? Well, it’s one of the most remote countries in the world, considered the ultimate Shangri-La, so it’s the perfect place to see whether a Yeti can stand up to the toughest of elements. There’s also a far more tenuous reason: Bhutanese people believe in the existence of the car’s namesake, the yeti. My destination is a wildlife sanctuary where yetis – or megoe, as they’re called in Bhutan – supposedly reside.

To get there, we – a convoy of Bhutanese guides and back-up – start at the border town with India, Samdrup Jongkhar, on the southern edge of the landlocked country. As we climb away from the quiet hubbub of the town, we quickly come to the mountain roads, full of the unexpected – wandering cows and smiling, waving people – as well as Buddhist shrines. I soon realise this isn’t a place for car spotting. There’s only a handful of vehicles. The most prevalent are big Tata trucks (see ‘The vehicles of Bhutan’, overleaf) adorned with multi-coloured religious symbolism and chugging out big clouds of black smoke.

In contrast, Bhutan’s prime minister, Tshering Tobgay, has something more sustainable planned for the nation’s vehicles: he wants everyone to go electric. It’s part of a broader environmental policy that says at least 60% of the land area must be forest – a figure they’ve already surpassed by 10% – and it’s the only nation in the world that is carbon negative. In 2014 Tobgay did a deal with Nissan to supply a bunch of electric Nissan Leafs. So committed is Bhutan that the king owns one (and a Toyota Land Cruiser, apparently) and the queen drives a Toyota Prius. Former environment minister Dasho Benji, who also owns a Leaf, told me uptake would come “slowly, slowly” and acknowledged that technology needed to improve for the cars to really take off. EVs are viable in the capital, Thimphu, but in the wilds of mountainous eastern Bhutan where we’re driving, an EV wouldn’t last five minutes. 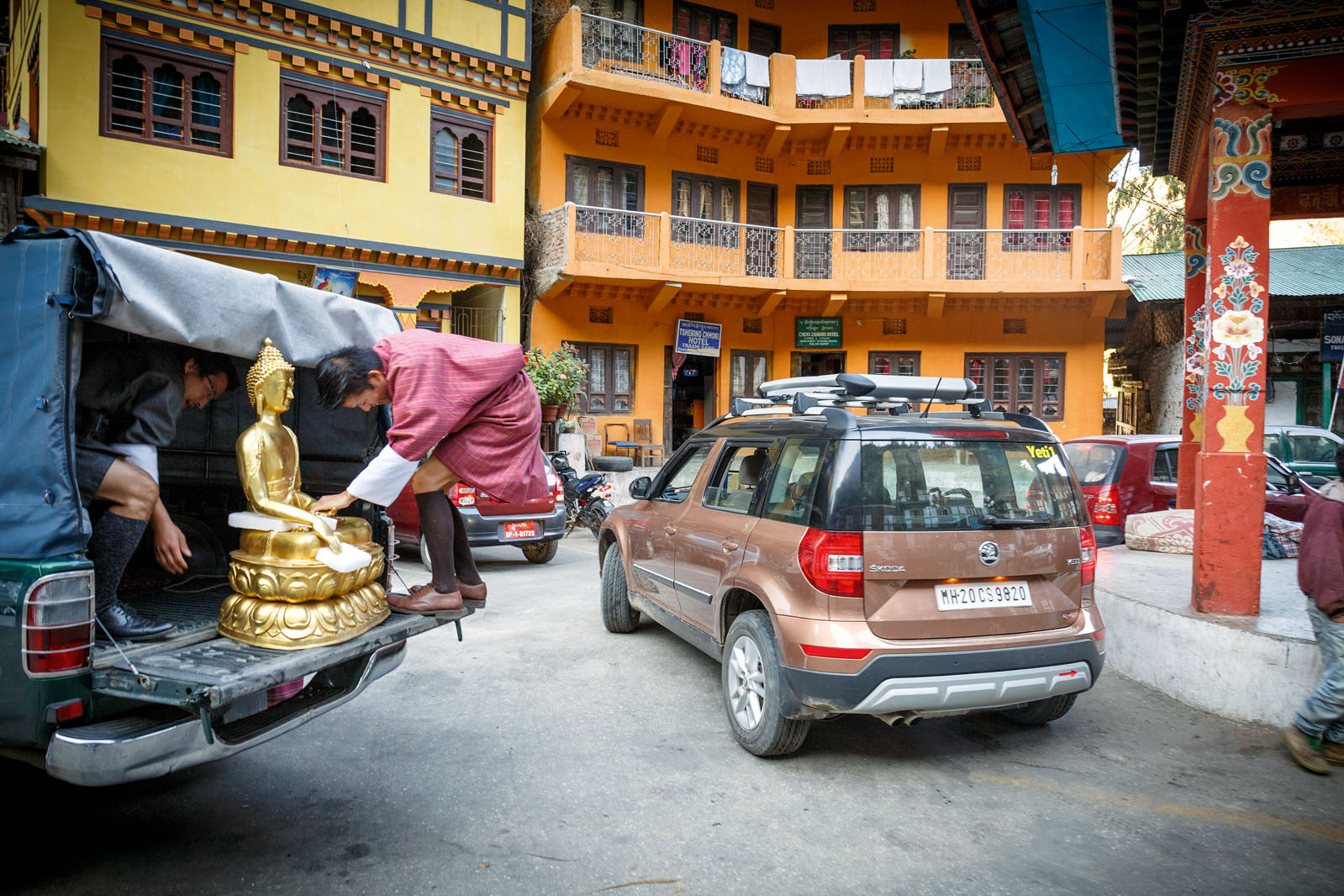 Although Bhutan has similar issues on EV uptake to us in the UK, it’s coming from a very different standpoint. With a population of 750,000, there are no more than 50,000 vehicles on the road. An even more staggering figure came from a former tutor to the king, Englishman Michael Rutland, who said that when he arrived in 1971, there were only 47 vehicles in the entire country.

Nevertheless, it isn’t long before we hit the aforementioned stand-off on the so-called ‘death road’, as my passengers inform me that we’re inches from the edge of the cliff. Our saving grace is a friendly local in front of us, who has clearly marked us out as foreigners. He directs the oncoming trucks to the edge of the road, allowing us to squeeze through. Hallelujah. We plough on, never at more than 20mph; there’s too much dust, too many wheel-crunching potholes and that ever-present sheer drop just inches to our left.

Not long after arriving at our lunch stop, I find a lama (a monk of sorts) blessing our cars. There’s some surreal chanting and incense burning and then it’s over. I have no idea what just happened, but I’m certain our safety on the journey is guaranteed.

Later, as the night draws in, we hit a small town full of unlit streets. It makes for a stunningly starry sky, but trying to drive amid cows napping in the middle of the street while pedestrians walk along the side is tense, to say the least. 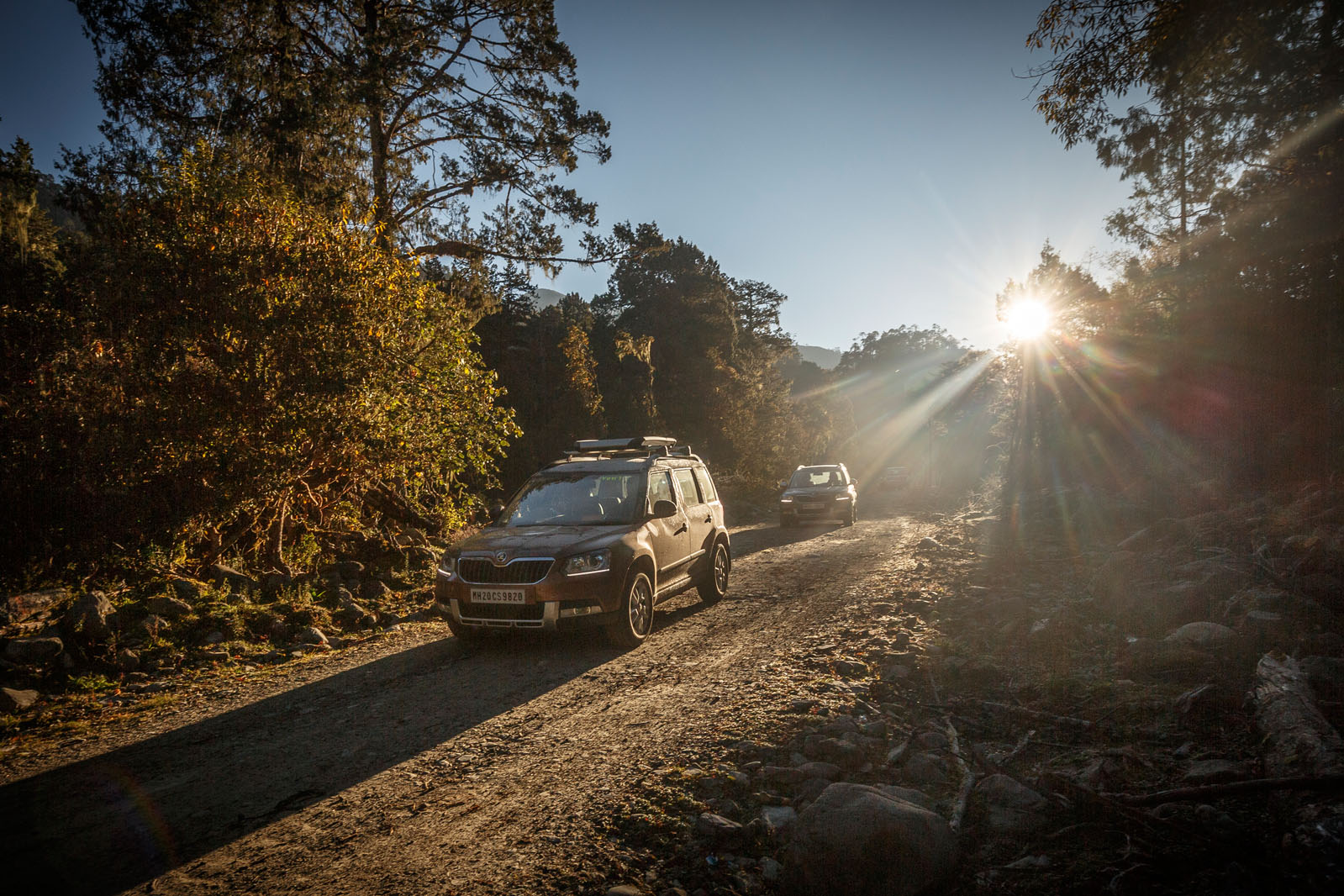 The next day, refreshed, we’re  back in our Yetis. I’m driving the Yeti Outdoor 4x4 in SE L trim, which is just under £25k in the UK, but this one is for the neighbouring Indian market and built in a plant in Aurangabad in central-west India. I was expecting a poor man’s version of the UK model, but the differences are indistinguishable. We even have leather seats.

As we climb higher, our guides have told us, the scenery becomes stunning, but I’m so blown away by the first day’s panoramas that it’s hard to believe it can be bettered. But they were right. As the air becomes thinner and we struggle to talk, let alone walk, the vistas become even more inspiring – and the roads become even more dicey.

The route to our highest point of 3530 metres is a new road, built two years ago. Visions of velvety-smooth asphalt are not to be. It is, at best, a track, and a rough, ropey one at that. Still, the locals must be pleased: it was a three-day walk before this road existed.

And so we arrive breathless at Marek village near Sakteng wildlife sanctuary, where the yetis supposedly live, and where there isn’t a single car. In fact, fewer than 30 tourists visit annually. We speak to locals about the real yeti, but most Bhutanese are non-committal, saying that beliefs don’t have to equate to ‘tangible’ things. There’s an evasive answer. 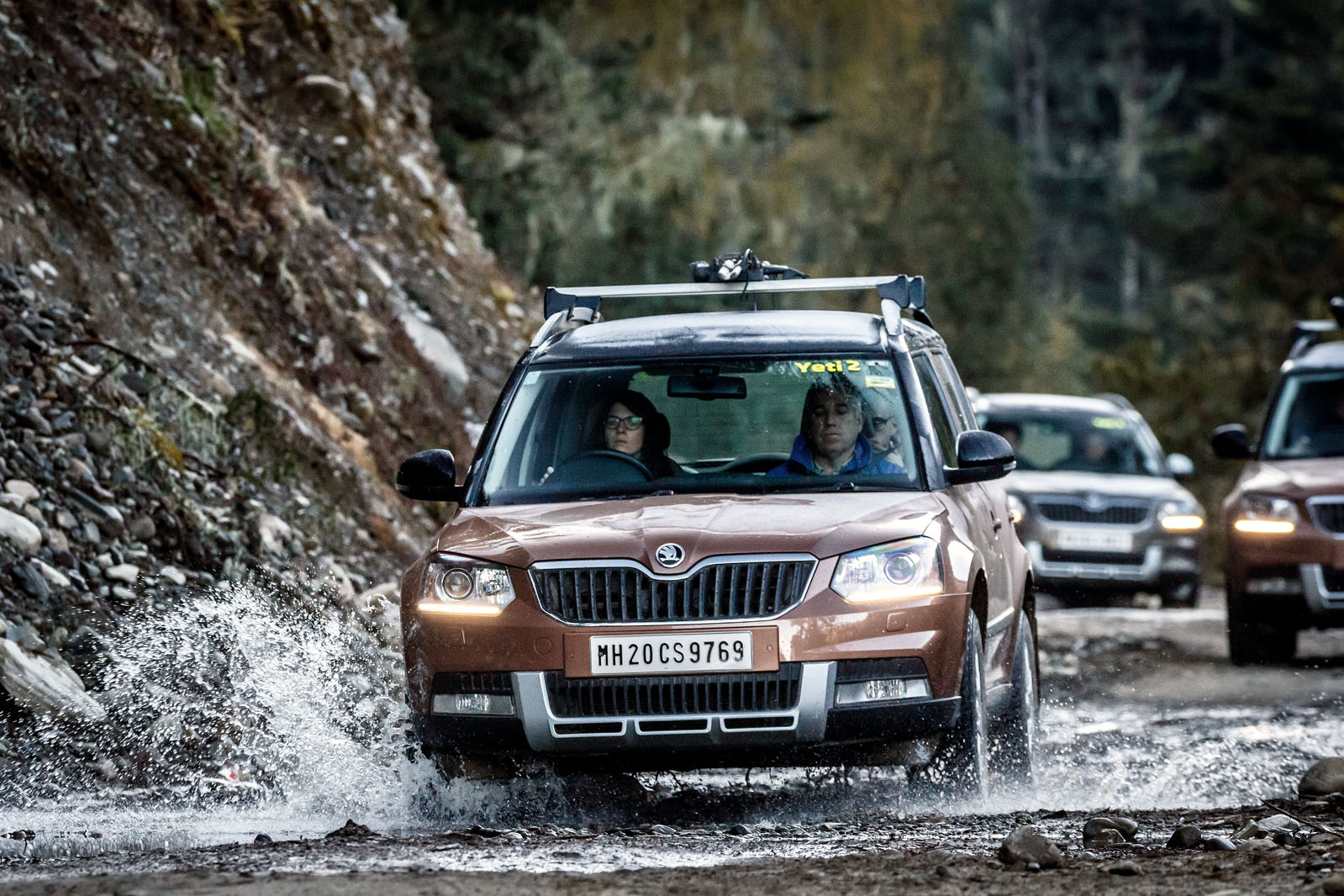 As suspected, you can’t rely on the yeti, but our Yeti is much more reliable. Honestly, I’d never have chosen a Yeti for an epic road trip, but it has been hard to fault. Its saving grace, alongside the four-wheel drive system, has been the Rough Road package, a £210 option, which includes underbody protective cladding. Numerous ‘ouch’ moments, as we hit the sharp edge of lethal rocks or deep ravines, have been negated and hill descent control has become my best friend.

Although the Yeti will never be a Land Rover, its four-wheel drive system, which uses a fifth-generation Haldex coupling, has surpassed expectations. Almost a third of UK owners opt for 4x4 in the Yeti, but I’m doubtful many get as much of a hammering as ours has. Deployed for at least three-quarters of the journey, it has managed every hairy situation thrown at it with grace and emerges from our treacherous drive unscathed. And I’m still amazed there have been no punctures.

After two days, I’d typically be reluctant to return to a car, but the Yeti is still growing on me. Although the interior is dated compared with its siblings, it’s comfy and well specced. My only complaints are the lack of a USB port – which isn’t the case with UK models – slightly upright back seats and a high biting point for the clutch, which every single driver struggled with on some of the tough terrain.

On our final day we retrace our steps, making this a 680km (423-mile) round trip. A former navigator of this journey once counted the corners: there are 40,000. No wonder I’ve spent a large amount of time feeling queasy.

As we arrive back in Samdrup Jongkhar after 14 hours of driving, we’re all a little bit broken. The Yeti has excelled, but driving on roads capable of knocking out your crowns take their toll. True, 680km doesn’t sound like much, but we’ve averaged nearly six minutes per kilometre and never ventured above the third of six gears. Our average fuel economy, according to the car, is 25mpg.

We hug our new friends goodbye and I’m sad to be leaving this country and our transport. I’m blown away by beautiful Bhutan and its people and more enamoured than I ever thought I could be with a Yeti.

... and you pay £50K for a Defender with slightlier chunkier looks, similar-sized 2.0 diesel, more street-cred, possibly lower reliability. I wonder if they still make the Yeti in India?

Upright back seats on Yeti.

Did the car you tested not have reclining back seats?
All UK Yeti's do.