Remember when plug-in hybrids used to be expensive? I know, I know; they still very much are for the most part. But this year we should see one or two new PHEV arrivals begin to change that – and the first is this, the first ultra-low-carbon, plug-in machine of any kind to be built by Czech value champions Skoda.

The Superb iV is one half of a duo of electrified Skodas that's emerging right now onto UK roads – the other half being the Citigo iV all-electric city car. There will be eight more ‘iV’-badged models along over the next three years, which combined are the upshot of a €2bn investment. And while it may be a little confusing that the firm has elected to brand its plug-in hybrid and all-electric wares alike, we can be assured – apparently – that all of them will bring new value appeal to a market for electrified new cars that's now set to become very much more competitive and diverse very quickly indeed.

The new petrol-electric Superb certainly kicks things off in that direction. Priced from a whisker under £32,000, it’s some 20 per cent cheaper than the entry-point for sales of the BMW 330e, and has a 15 per cent advantage over the related VW Passat GTE. The latter comparison is particularly interesting in light of the fact that the car uses the same hybrid powertrain (which mates a 154bhp 1.4-litre TSI engine with a six-speed twin-clutch gearbox and a 114bhp electric motor) as the Passat, and has the same 13kWh lithium-ion drive battery. 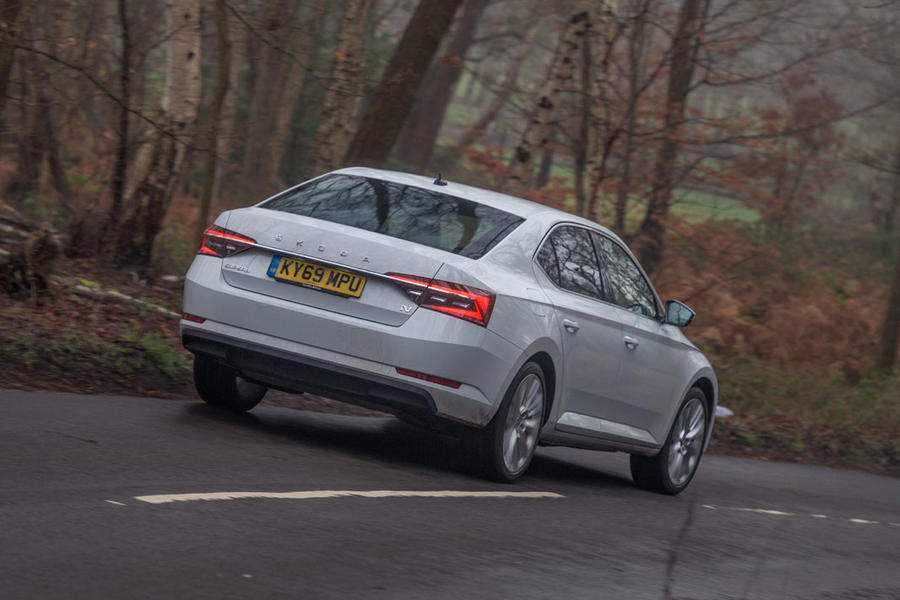 Large, comfortable and practical, just as the Superb has always been; and rational and straightforward in its character. It's pretty plain and unexciting to drive, too, in a way that plug-in hybrids generally haven’t risked being so far – but which, you might argue, the price positioning of this one uniquely permits it to be.

There is surprisingly little of the ‘special-derivative’ cabin garnish that we typically see on PHEVs about the interior. Our mid-level SE L test car had sports seats, a strip of carbonfibreish veneer and a sprinkling of ambient lighting, but nothing that you wouldn’t expect to find on any mid-trim business saloon.

The car’s controls, its layout and its general appointments are all very normal. If not for the special digital instrumentation graphics of the Virtual Cockpit binnacle, as required to allow the driver to effectively manage and blend petrol and electric power and monitor how the battery is charging (and discharging) on the move, you might very well not recognize it as an electrified model at all. The driving position is unusually highly perched for a saloon, and so visibility is good and long-distance comfort likewise.

The Superb iV imposes a minor practicality compromise over its conventionally fuelled rangemates, but it’s not one that’s too noticable – and you wouldn’t expect anything less from a car with such a remarkable reputation in this field. Its drive battery is carried under the back seats and within the wheelbase, but some of its power electronics are located under the boot floor – which means boot space drops from 625- to 485 litres for the hatchback version, and from 680- to 510- in the estate. This sounds like a big sacrifice on paper, but in practice all you really lose out on is underfloor storage areas. Second-row passenger space is still good enough to beat most mid-sized executive saloons.

The one measurement where this big Skoda doesn’t quite deliver such expansiveness is cabin width: a limitation of the Superb's widely-shared model platform. If you’re looking to get three youngish kids in booster seats across the back row, there are probably slightly more accommodating options for the money.

On the move, the car’s main dynamic qualities are its comfort, efficiency and ease of use – it's quite striking how "normal" the iV feels to use and to operate. Urban speeds are mostly taken care of under electric power, where responsiveness is good but not particularly notable, and drivability easy but not rousing or encouraging.

As standard the iV comes on 17in wheels, but our test car ran on optional 19s that caused it to trip and thump a little over nastier ridges around town, and also created slightly more road noise at higher speeds than suited its otherwise laid-back motive character. Ride comfort is generally good, though, thanks to a compliance-oriented suspension tune that makes the car absorbent of bigger inputs (DCC adaptive dampers are standard on every Superb iV, interestingly; while optional on the pricier VW Passat GTE) – if a little bit soft and short on body control at greater velocities.

There's a familiar choice of primary driving modes (Eco, Comfort, Normal, Sport, Individual), to which three hybrid-specific secondary modes are added (electric, ‘hybrid auto’ and ‘hybrid manual’). Electric mode is self explanatory; the second mode sees the car itself managing how battery power is deployed, the third mode giving you the choice of when to use the battery, preserve its charge or top it up.

It's possible, then, to make full use of the Superb iV's 25-30 mile all-electric range twice – bookending a 50 mile motorway commute – if you began your journey with a fully-charged battery: it can be restored from empty to a full charge over that kind of cruising trip. Real-world fuel economy will depend entirely how you use it – but assuming you can split your mileage roughly 50/50 between electric and petrol motoring (which will mean doing plenty of at-home charging) 70mpg is about what you’ll get.

The Superb iV’s outright performance level is strongish, but even if you drive it around in ‘Sport’ mode all the time, it doesn’t really feel sporty or fun. The car’s sheer size, its mass and its comfort bias prevents it from engaging its driver much. You’re obliged to get deep into the accelerator pedal before any true urgency is conjured up from the powertrain, and meanwhile the body is allowed to roll markedly through corners, while the chassis only responds to steering inputs in quite gentle and fairly inert fashion and it does allow the odd bit of pseudo-torquesteer to divert your line on occasion if you corner and accelerate hard at the same time.

All of which would be ideal for laid-back, low-stress, low-emissions, money-saving daily motoring, of course – provided you do plenty of short-range trips and have plenty of opportunities to charge up. Run the Superb iV like any other petrol saloon and it’ll return 38-42mpg depending on how keenly you drive it. Even if you do get keen, it won’t excite you much. 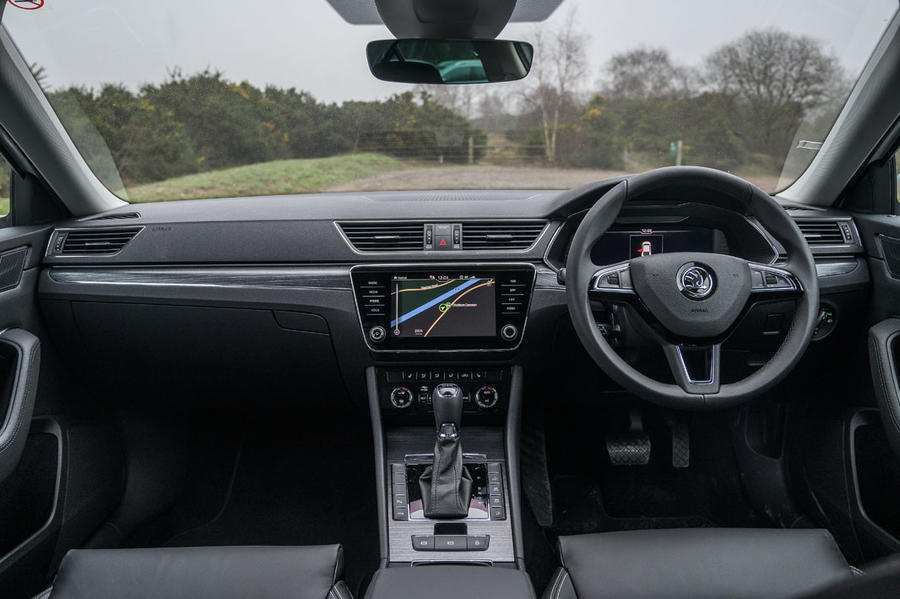 Right now, if it’s the only PHEV saloon in your company car list bracket (and it might well be), you should seriously consider it. With the way that company car tax is changing this April, you could probably at least halve your BIK liability by picking it instead of a conventional petrol or diesel rival.

Meanwhile, if you’re spending your own cash and simply want a big family car that’ll feel familiar and easy to use, won’t cost a packet up front and really will deliver fuel and emissions savings over predominantly short-range trips, it should be equally hard to overlook.

The Superb iV’s sheer unremarkableness is at once its greatest strength and its biggest problem; because it’s tough to really want a car whose main ambition is simply to seem so practical and normal. The thing is, out of a context in which plug-in cars have played every wildcard and joker there is to be played, risking being normal, sensible and relatively well-priced is arguably the boldest option. I wouldn’t be surprised if Skoda ends up being richly rewarded for taking it. 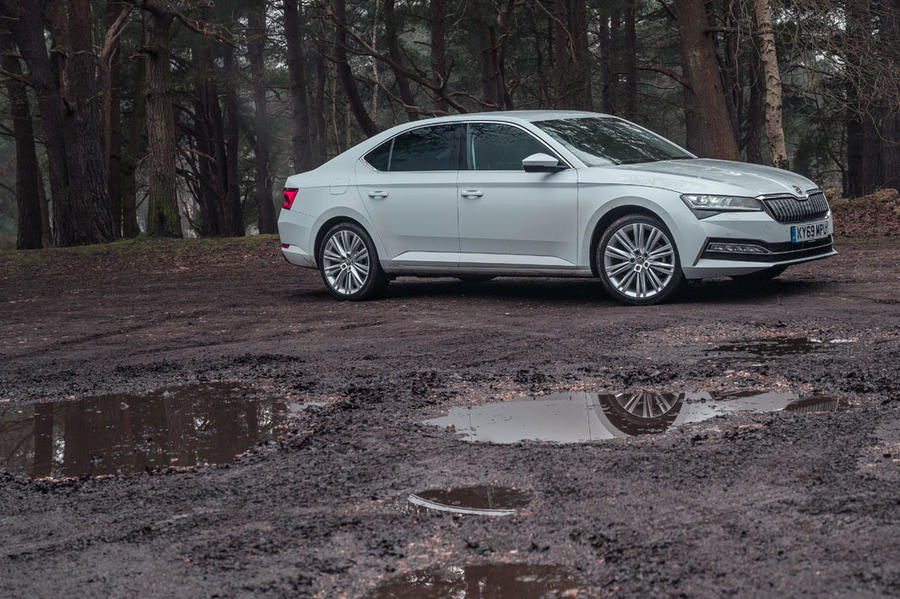 Built for its market

The number of compomises that the buyer of a new car has to make today are greater than ever before. Equally the number of unknowns looking forward in its use are also greater than at many times in the past. The Superb is built to appeal to a particular demographic, one which includes a genuine need for space combined with good economy in use and which minimises its impact on the environment. It is bound therefore to favour comfort over outright handling and performance. This will not make it an attractive 'drivers' car.

I suspect many of those who are being snarky about it are not those who will need a car of its type. This would include those who choose to drive performance cars, those with a perceived higher status in the golf club car park, or those who choose to minimise their carbon footprint in a purely electric or perhaps a small supermini. Nothing wrong with making these choices. It's easy to be critical from one of these positions, but it's rather unrealistic when your favoured vehicle doesn't meet the needs served by the Superb.

I do sympathise with the Autocar staffers when they get a car like this. There is always going to be a car which is more desirable, more powerful, more agile, better handling, with better interior or basic spec. What words do you use to make the sweet spot in the middle sound a desirable place to be?

As you might have surmised, I am in the very wide demographic that this car targets. I have to think I may have it for some time and that in that time we may well see the tax system on road usage change, may well see legislation on emission standards in cities change, may well see fuel duty target low carbon country needs, and are likely to see a substantial increase in charging points, but outside London probably not enough for some time to make normal people with their families or grandchildren on board start longer journeys in a pure electric car. PHEVs will make many journeys battery only and will make longer journeys worry free. Personally, I would like the battery to give me 100-150 miles and not the 30-40 miles which is usual today, and which seems to be cynically designed to generate the best results on the new mpg tests and not the best results for the planet. That is the thing about compromise. No one gets exactly what they want at the price they want (or can afford) to pay.

Is this one of two Christmas

Is this one of two Christmas limited editions,the other being the Superb Holli ? If not is there going to be a Superb Vi and a Vii, then an iiX, an iX etc ? And what happened to the Superb i, the ii and the iii ? Seriously though, its a Passat in a dress and consequently has about zero appeal to most car enthusiasts, whatever drivetrain it uses.

That's what happens when you comment first without reading the article, numbnutz
michael knight 24 January 2020

It's really easy to look this sort of thing up, and that way you wouldn't risk posting things that are clearly not true.

It's really easy to look this sort of thing up, and that way you wouldn't risk posting things that are clearly not true.

your post is a bit confusing. Even if we go with DSG and 1.5TSFI the PHEV is still £5,500 more. So the question is how long would the 30% in fuel saving take to pay for itself (remember to add the Leccy)! These cars aren't about better accelaration they're about saving petrol so speed is of less importance.

My prices are correct either £7,000 (manual) or £5,500 extra for DSG. SO the question is how many years would it take to repay itself? Over to you