The Skoda Kodiaq sets two landmarks for the Czech car maker: this is the manufacturer's first ever proper SUV, and also its first ever seven-seat car.

Perhaps even more importantly, it's also something of an acid test of the strength of the Skoda brand, and could well be a bellwether for the company’s long-term strategy to move gradually upmarket. If Skoda proves that it can sell large family SUVs for the kind of money that isn’t too far off what’s needed for an equivalent BMW, Audi, Mercedes-Benz or Land Rover, it’ll be much easier to move the rakish coupé and small SUV concept cars we’ve seen in recent years from the drawing board to the production line. The Kodiaq may also finally help prove to buyers that the reputational problems of Skodas all those decades ago are simply no longer a factor. 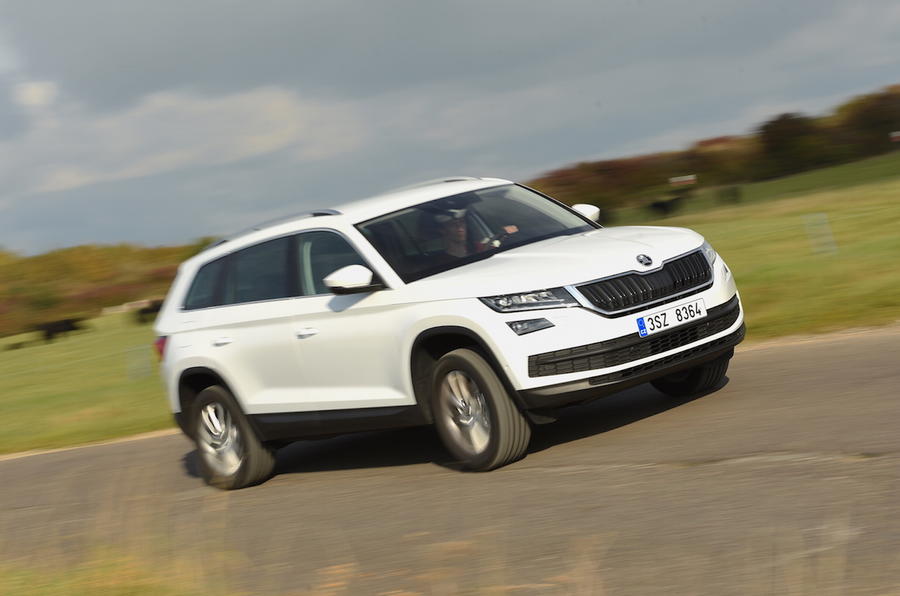 The Kodiaq is the fourth and final new Volkswagen Group SUV based on the MQB platform to hit the market in 2016, after its Volkswagen Tiguan, Seat Ateca and Audi Q2 cousins. Unlike any of those cars, however, the Kodiaq offers customers the potential to combine must-have modern SUV desirability with seven-seater utility and four-wheel drive capability – and all for less than £27,000.

The entry-level Kodiaq actually costs less than £22,000, while the range-topping 2.0-litre 187bhp TDI DSG model in tech-laden Edition trim is nearly £35,000. Interestingly, therefore both the Land Rover Discovery Sport and the Vauxhall Mokka X can be considered rivals. The bottom-rung petrol (123bhp 1.4 TSI) and diesel (113bhp 2.0 TDI) engines power Kodiaqs in entry-level ‘S’ trim, which have front-wheel drive only. Above that, Skoda offers 148bhp petrol (1.4 TSI) and diesel (2.0 TDI) options in front and four-wheel drive formats, with either manual or twin-clutch automatic gearboxes. Top-of-the-range engine options are good for 178bhp in the case of the 2.0 TSI petrol, or 187bhp in the case of the 2.0 TDI diesel – both coming with four-wheel drive and a DSG automatic gearbox only.

Our first taste of the Kodiaq comes in an Edition-trim, 148bhp 2.0 TDI 4x4 manual, which was fitted with seven seats as standard; lower down the range they’re a £1000 option. 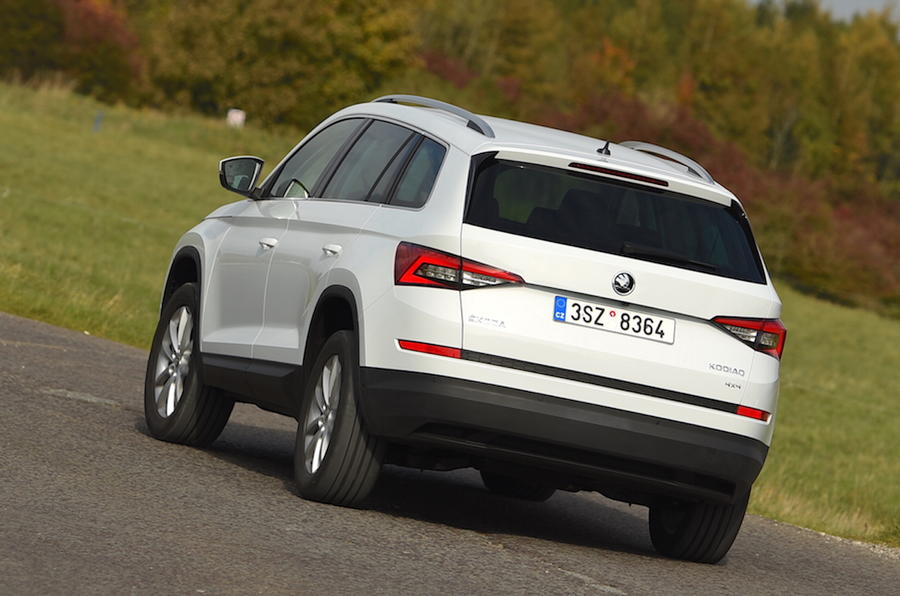 The Kodiaq certainly makes a good first impression. Skoda claims inspiration from the Czech Republic’s crystal-cut glass tradition for the Kodiaq’s styling, saying that there's nothing overtly borrowed from sister-brand Volkswagen’s quite notably similar Tiguan. The styling is slightly derivative, though, but that may be forgivable from a brand dipping its toe into the large SUV market for the first time – particularly when it amounts to a quietly handsome car.

The interior of our top-of-the-range test car could perhaps have made a slightly better attempt at luxury. The Kodiaq’s leather sports seats are certainly comfy enough, its controls are laid out clearly and logically, and the interior materials show the consistent good quality and attentive finish that we’ve become used to from Skoda. However, in some places, where the manufacturer had tried to go the extra mile on richness – with the contrived-looking patterned dashboard trims of our car, for example – it stumbles. In other areas, such as the swish-looking glass-fronted 8in Columbus touchscreen infotainment system, things are more of a success. 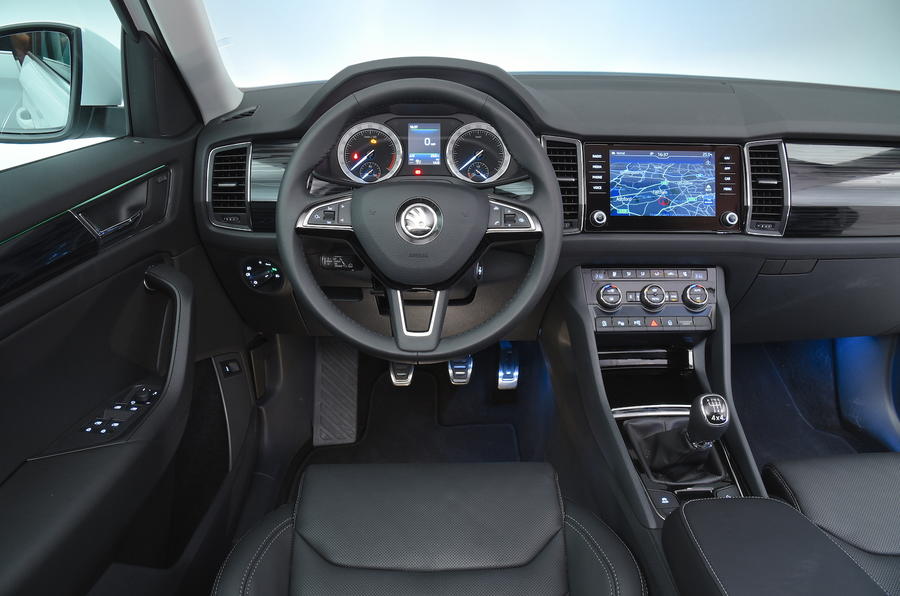 For rear passengers, the Kodiaq proves very accommodating. Like most SUVs its size – the Mitsubishi Outlander, Nissan X-Trail and Land Rover Discovery Sport – it won’t quite seat seven larger adults in comfort, but it gets closer than most. There’s abundant head and leg room in the second row, where the seats split 60:40 to slide for and aft, split 40:20:40 to fold down, and tilt forwards and slide to grant access to row three.

The rearmost seats are big enough for a smaller adult or growing child in reasonable comfort, though the absence of Isofix childseat anchor points is a disappointment. It’s also slightly disappointing to find that, more like a normal MPV than a big SUV, you don’t get ‘stadium’ seating levels in the Kodiaq, so there’s those in the rear of the cabin don't get a decent view forwards over the heads of those sat in front of them.

This mid-range 148bhp diesel engine moves the car along briskly enough that you’d seldom regret not stretching to the 187bhp model. There's ample torque when you've got a light load, and the ratios of the six-speed manual gearbox are well-chosen, although the shift quality is a little bit stubborn. Refinement is very good at cruising speeds, although it does become a bit gruff and breathless when you're working it beyond 4000rpm. It's no worse than plenty of Volkswagen Group hatchbacks, and still better than plenty of more agricultural-feeling 4x4 rivals.

It’s the Kodiaq’s ride and handling that’s the big surprise. Unfortunately, if you’re expecting the ‘big comfortable Skoda’ feel of the Superb and Octavia, the Kodiaq's taut and occasionally fidgeting ride might take some getting used to. It’s clear that Skoda doesn’t want its new breed of SUVs to have to have the laid-back dynamic character of its current big cars, but instead to be thought of as every bit as agile as any rival in the class. Therefore the Kodiaq’s ride is medium to firm, getting just reactive enough over uneven B-roads to jostle you. Handling is upright and fairly agile, although the Kodiaq could be easier to guide through a corner on account of a slightly pendulous over-assisted steering feel.​

If you need a car of this size, and plenty of people do, you should definitely consider the Kodiaq. 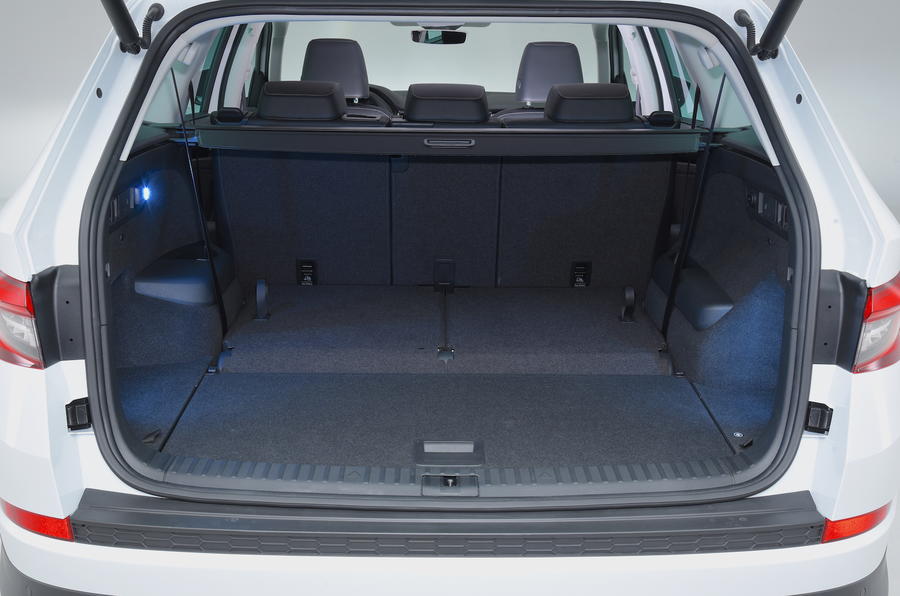 The Kodiaq’s slightly imperfect ride and handling would be unlikely to persuade me that this wasn’t an excellent added-value answer to my large family’s motoring needs, even as an interested driver. The car’s boot is huge, all seven of its seats are usable, its infotainment system and convenience features are excellent, its engines are strong, and it's well-priced and well-equipped in mid-level trim.

As a statement of ambitious intent from Skoda, the Kodiaq doesn’t quite have the impact it could have done. However, as fuel for the firm’s inexorable growth and development, it's just what the doctor ordered.

This vehicle is designed to

This vehicle is designed to safely haul up to 7 bodies about. With little compromise to the ride/handling. Think of the end user/purchaser and what they'll be doing every day with a Kodiak. If you're a one unit household where handling is a priority, buy an MX5.
michael knight 14 November 2016

Well-priced at £32K? Autocar, come on, you're falling into the VAG trap. The 3008 you've recently tested get's the "it's a bit pricey, starting at £21K" treatment...You've got to be kidding.

But then the Peugeot hasn't got 4 wheel drive, seating for 7 and a 2.0 diesel engine

Go for an S spec car on sensible rubber, not the top of the range big wheel/inappropriate tyre combination. I read another review elsewhere earlier today that praised the car for its ride comfort! Anyway, I'll make my own mind up when I try one. Congratulations Skoda for bringing a D segment, quality SUV to market for under £22k. Not everyone wants endless gadgets, some folks see the value of a lot of large, practical solid quality car for their money.
View all comments (13)