From £96,1409
Not only a superb GT car next to its rivals, but also the pick of the new Panamera range
Open gallery
Close

There they were. All three lined up neatly in the car park and a man from Porsche shouting: "Which one do you want first?" Oh dear. Four decades of trying to purge the gluttonous juvenile within, and still he lives on; without a moment’s hesitation, the reply was: "The red one, please."

The red one was the mighty Panamera Turbo. In an instant, the eyes had clocked the silver Panamera 4S and blue 4S Diesel sitting next to it and the frontal lobe had dismissed them as underlings. You can read about the Panamera Turbo here, but for now, let’s look at why it was so wrong to poo-poo the petrol 4S.

Compared with the outgoing 4S, the V6 engine has shrunk to 2.9 litres but has a couple of centrally mounted ‘hot vee’ turbos plumbed in. So not only is the new engine 14kg lighter than the outgoing 3.0-litre unit - not to mention considerably more efficient - but it also produces an extra 20bhp and 22lb ft more torque. Which results in zero to 62mph (with the optional Sports Chrono package) in just 4.2sec. The 0-100mph sprint takes a mere 10 seconds. 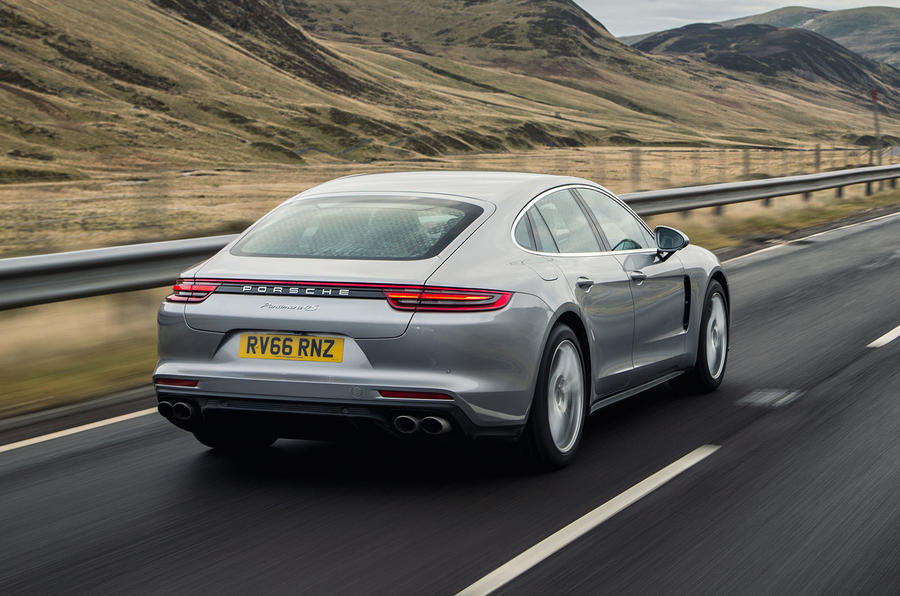 It doesn’t feel that fast. Panameras seemingly don’t, even the chest-wig Turbo models, and being a hereditary condition, this afflicts the 4S as well. Yet judging by the rapidity with which those liquid crystal speedo characters click over, be in no doubt: it is rapid.

The 4S is quite a screamer, too, but as always you need to switch on the optional sports exhaust to exploit the acoustics. Then it barks pleasantly raspy tones, as opposed to the kind of spine-tinglingly fruity ones that would inspire you to poke about in the engine’s upper reaches.

You still will, though, because of the delicious power delivery. Peak torque may begin at 1750rpm, but it feels at its strongest beyond 3000rpm, then keeps building exponentially until the needle is pointing at the red zone. Add in the keen throttle response and it feels quite un-turbo-like, with a power delivery more akin to a naturally aspirated multi-valve motor.

The PDK dual-clutch automatic gearbox is good in either auto or manual mode, darting swiftly and seamlessly between ratios. Only its software blots the copybook, by blocking manual downchanges until the revs fall inexplicably low. You sense nothing more than a laptop tweak would alleviate this little woe. 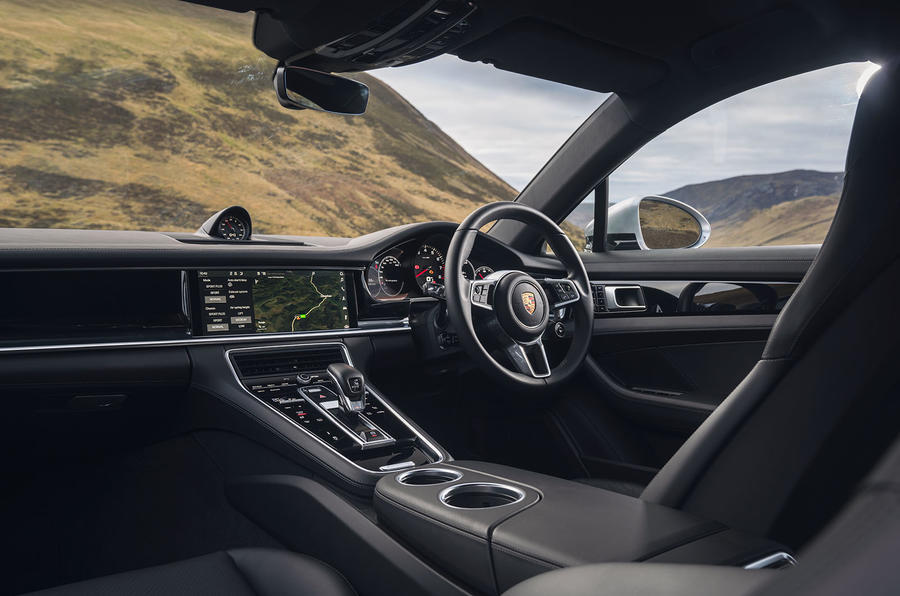 There are no such issues with the programming of Porsche’s new 4D-Chassis Control four-wheel drive system, though. Even if you do the incomprehensible and switch off all the driver assistance programmes on a sodden, challenging Scottish mountain road, it gives you a few degrees of twitch at the rear, after which it shuffles the power frontwards so you can rifle it out of corner. ‘Measured fun’ would be an apposite description.

That could apply to the charmed handling as well. The Panamera may weigh the equivalent of a mid-sized hippopotamus, but sticking with the critter theme, it changes direction with the agility of a housefly. That’s partly down to the Panamera’s new party trick of optional four-wheel steering, which aids rear-end stability at speed to the extent that Porsche can fit a quicker rack. And apart from a slightly digital feel around the straight-ahead, the wheel builds weight so effectively that you can use that lively front end with utter confidence. There’s enough feel to help you gauge the reaction between tread and road, too.

This lucid fluidity spills into the suspension. We thought the Turbo was good, but the 4S’s waif-like V6 affords it a bonus dimension of body control, albeit with the adaptive air-sprung set-up fitted. It’s supple and comfortable in its softest mode but has a tenacious, terrain-hugging resolve in its firmest setting. Too stiff? Not on your nelly; there’s enough vertical wheel control in hand to keep things resolutely stable, even on the crinkliest roads.

Inside the Panamera, Porsche has upped the razzmatazz. Those messy buttons on the Mk1’s centre console have been smoothed off with touch-sensitive switches in the Mk2. There’s also a new multimedia system with all the connectivity you could desire, displayed with sharp imagery on the 12.3in main screen. There are also two smaller TFT screens flanking the traditional analogue-age rev counter sitting right in front of you.

It’s all very clever indeed, but to be honest, not particularly practical. The touch-sensitive buttons are tricky to locate on the move, while the multimedia system's layers of menus are so numerous as to be a distraction. 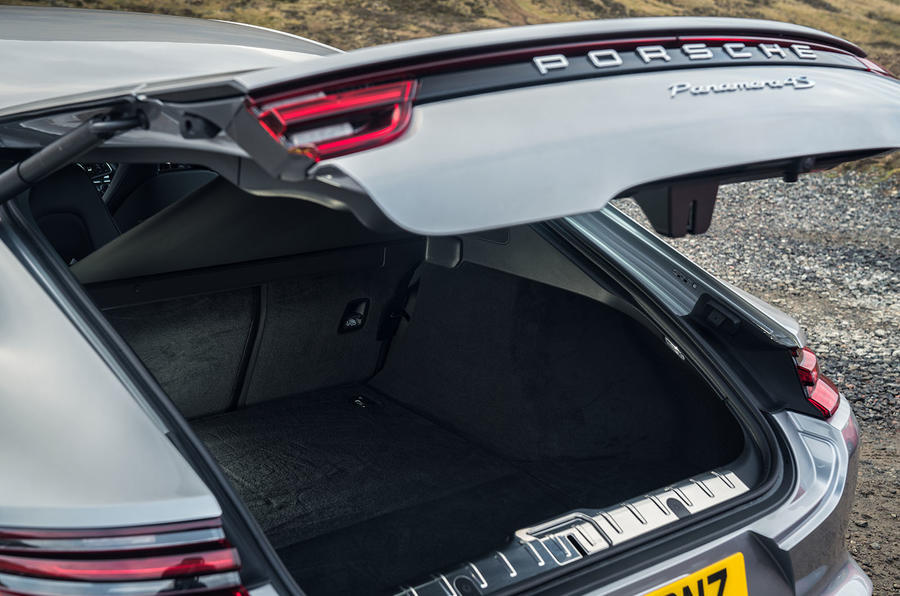 Infotainment gripes aside, this is a stunningly engineered, superbly executed car. Not a limo, mind; buy a Mercedes S-Class if you want one of those. No, this is a highly proficient GT car right up there with the BMW M6 Gran Coupé and Audi RS7, with at least as much room for a 6ft driver and three similar-sized passengers.

And far from being the Turbo’s underling, the 4S is the bees knees: fast enough without being silly and, by a whisker, a sweeter-handling thing than the Turbo. Knowledge is power, they say. Faced with our opening dilemma again and knowing what we know now, we’d forsake the Turbo’s power and pick the 4S.

I see the irony in your user us a reference to a Spanish civil war communist when commenting about £100k cars.
jer 16 December 2016

Everything that makes it outstanding is optional

I'm sick and tired of Porsche selling you half the car, only to make you pay dearly to make them truly brilliant through an endless list of -very expensive- options. They're not options, it's what the car should be in the first place! Do you want that nice exhaust note? Option. The agility of 4WS? Option. The comfort and balance of the air suspension? Option. A sporty edge with launch control as icing? That'll be the Sport Chrono package, Sir.

Please, Autocar, indicate the "price es tested" figure besides the base price (which NO-ONE is going to stick with) to give us a true feel of just how much these cars cost.

I agree with Ektor effectively magazines are testing prototypes for all the likelihood you will be able to buy or find one with the options that the test cars have. This is to the point that the road tests are becoming skewed or partly irrelevant when it comes to suspensions ride and handling, interior finish (leather dash etc) instrumentation & tech 12" screens, performance e.g chrono pack, Audi bespoke paint and interior colours etc etc. they are prototypes.
ricequackers 17 December 2016

Ektor, the target audience is

Ektor, the target audience is well aware of this and will happily fork out the extra £10k-£20k for the options. If you can afford £90k but can't afford £110k, you shouldn't be buying this car at all.
View all comments (9)