BACK TO ALL NEWS
Currently reading: Porsche Panamera Sport Turismo estate revealed
UP NEXT
Volkswagen ID 3 vs Nissan Leaf: Battle for the EV top spot

The Porsche Panamera Sport Turismo has made its public debut at the Geneva motor show, seven months before the first cars arrive in Britain.

Set to make its public debut at next week’s Geneva motor show, the new sporty estate brings an added degree of practicality to the second-generation Panamera line-up with a new four-plus-one seating layout, a large electronically operated tailgate, a significantly lower loading lip and an extra 20 litres of boot space.

Read our review of the Porsche Panamera Turbo Sport Turismo

Five years on, the first official photographs of the production version of the Sport Turismo reveal it holds true to the appearance of the earlier concept, with a uniquely styled rear end that helps to provide the Panamera with greater interior flexibility and load space in a move Porsche hopes will see it win over buyers who may have otherwise opted for a more conventional estate from rival car makers.

Credit for the styling of the new Porsche model goes to Mitja Borkert, who also penned the company’s all-electric Mission E concept and is now head of design at Lamborghini. The visual differences between the standard Panamera and the new Panamera Sport Turismo begin at the B-pillars, with a longer roof that extending backwards with less rake. The rear doors have also been modified to accommodate a larger glass area. The D-pillar is appreciably more upright, while the rear fenders have been modified accordingly.

At the rear, the new tailgate retains the same width as the liftback appendage used by the standard Panamera but owning to its increased height it offers a much larger loading aperture. The loading lip is also set lower, at bumper level, to ease the loading of heavy items.

A complex active spoiler element mounted atop the tailgate at the rear serves to enhance the new estate’s aerodynamic properties. It deploys in three stages depending on speed and/or driving mode, generating additional downforce of up to 50kg at the rear axle. 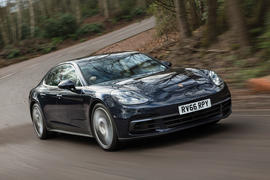 When the Sport Turismo’s optional panoramic sliding roof is opened, the spoiler is automatically set to a position of 26 degrees to help minimise wind noise.

“The Panamera Sport Turismo is a step forwards into a new market segment, but it retains all of the values and attributes characteristic of Porsche,” says Michael Mauer, head of Porsche’s design operations.

At 5049mm in length, 1937mm in width and 1428mm in height, the Sport Turismo is same length and width but 5mm higher than the second-generation Panamera liftback. It also rides on the same 2950mm wheelbase as its established sibling. The Sport Turismo is the first Panamera model offer seating for up to three in the rear, rather than just two as with the liftback. The two full-sized individual rear outer seats are accompanied by a narrow and raised central rear seat, boosting overall accommodation to five. The central rear seat is, however, compromised for leg space owing to the central tunnel running down the centre of the floorpan and really only designed to accommodate children.

Nevertheless, Porsche claims the added 5mm of roof height and less tumble home to the rear of the glasshouse not only provides for improved entry and exit to the rear over the liftback but also makes for greater head room for those seated in the rear.

Boot capacity is 520 litres, bigger than all other Panameras, the E-Hybrid Sport Turismo at 425 litres, and 20 litres more load capacity than the standard liftback. The backrests of the rear seats can automatically be folded down in a 40:20:40 configuration to extend overall load capacity to 1390 litres. A so-called luggage compartment management system is among a long list of options available for the new Porsche model. It uses two rails integrated into the floor of the boot, four lashing points and a partition net to secure items.

At launch, the Panamera Sport Turismo will be offered in five different model variants: the Panamera 4, Panamera 4S, Panamera 4S Diesel, Panamera 4 E-Hybrid and Panamera Turbo – all of which are planned to be on display at the Geneva motor show, which opens its doors to the public on 8 March.

Porsche chairman Oliver Blume said "The Porsche Panamera Sport Turismo is a car that will take you to Nürburgring in the morning, the Eiffel mountains in the afternoon and home on the Autobahn with no problems at all. You can have a three-seat configuration in a Panamera for the first time in a 2+1 set-up."

The sole diesel model at launch is the Panamera 4S Diesel Sport Turismo, which receives a turbocharged 4.0-litre V8 engine with 416bhp. It is joined by the Panamera 4 E-Hybrid, whose driveline combines a turbocharged 2.9-litre V6 petrol engine with 325bhp and an electric motor mounted within the front section of the gearbox with 134bhp for an overall system output of 456bhp.

That looks great and will

1 March 2017
That looks great and will surely become the biggest seller in the Panamera line up!

Best looking Panamera by a

2 March 2017
Best looking Panamera by a long shot. Scrap the hatch, just do this

2 March 2017
Saw these winter testing here in the Arctic in Feb.3rd child seat in back is useful.Neveretheless the CLS Shooting Break has been canned as it wasn't selling.The Porsche trucks outsell the cars by manyfold,so I don't see a big market for them at all.They are also enormously overpriced. RS6 ,upcoming Alpina B5 Touring and E63S Estate are all better value IMHO.

Signals the death of the hatch?

2 March 2017
[quote=madmac]the CLS Shooting Break has been canned as it wasn't selling.The Porsche trucks outsell the cars by manyfold,so I don't see a big market for them at all.[/quote] I agree with your comment re: the CLS estate, that's because there were better options in the Merc stable. There's definitely a market for the Porsche tho, as others have said, this is so much better looking than the hatch in every way. It's the future of the hatch that I'd be worried about.

2 March 2017
If they offer roof rails it would be a lovely way to travel, in the right colour/wheel spec of course…still not sure why manufacturers strive to make the estate variants of their cars, not look like estates..its pretty obvious it is an estate so celebrate that fact make it even more practical...

2 March 2017
Love the way there's no picture of the +1 seat in back so it's probably only for a lego man, anyway have to be carefully last time I mentioned what a waste of space and there not being a 5 seater I got trolled. Fuelled up some versions of this huge ugly tank come in at 2400kg will this be the first ever 'Sport' to hit 2500kg, what a way to waste £150,000. No wonder sales are falling

2 March 2017
[quote=xxxx]No wonder sales are falling[/quote] Are they? Its highly likely that sales of the new Panamera are lower versus same time last year as they weren't yet released in USA and China in January....

Another day, another dinosaur...

2 March 2017
Yet again an Autocar homage eulogising over an overweight, overwrought Teutonic behemoth. The world is moving on apace yet irrelevancies such as this dominate this once august 'publication'. In the real world away from the increasingly introverted and myopic viewpoint of the motoring sector this is an obsolete relic from the halcyon days of colossal corporate over-indulgence (and damn the long-term consequences) that fails to address any of the issues of how best to provide personal transport on a sustainable basis whilst managing to bring pleasure to the user.