You’ve got to feel a little sorry for the Porsche Panamera. Once the go-to large luxury sports saloon, this performance five-door has been rather upstaged by its new upstart EV sibling, the Porsche Taycan.

Pitching up in pretty much the same sector of the market and taking up largely the same footprint on the road, the all-electric Porsche, complete with its on-trend zero emissions messaging, has rather stolen the Panamera’s thunder (not literally, given its near-silent progress).

Yet Porsche still has faith in its fleet-footed family flagship. Not only has it suggested that it could survive alongside the Taycan for years to come, but it has also not long given both the hatchback and the more spacious Sport Turismo versions of the current 971-series Panamera a little mid-life nip and tuck.

So can these changes help the Panamera share some of its trendier younger relative’s space in the spotlight? Well, when it comes to raw statistics, our all-singing and all-dancing Sport Turbo S E-Hybrid Sport Turismo would certainly represent a formidable inclusion in any Top Trumps hand.

For starters, it’s currently the most powerful internal-combustion-engined model the company makes. The twin-turbocharged 4.0-litre petrol V8 features a 20bhp increase to 563bhp, which, in conjunction with the 134bhp electric motor, makes for a heady 690bhp, not to mention a thumping 642lb ft torque output. Porsche claims a neck-straining 3.2sec for the 0-62mph (0.2sec quicker than the old car) and a top speed of 196mph, which is a largely irrelevant 3mph more than before.

Perhaps more significant these days is the fact that by carefully optimising the cells of this plug-in hybrid’s lithium ion battery pack, the available energy has been increased from 14.1kWh to 17.9kWh, meaning a roughly 30% increase in all-electric range to 31 miles, which Porsche, like most manufacturers, maintains is enough for the majority of everyday journeys and commutes (remember those?).

In all other respects, this is a very mild makeover. The software tuning of the adaptive dampers and 48V active anti-roll system has been tweaked, while the steering mapping has been subtly altered to take into account lessons learned from the 992-generation Porsche 911 and Taycan. Externally, the previously optional and slightly more aggressive Sport Design front end is now standard, the Turbo S E-Hybrid further enhanced by its C-shaped light treatment. At the rear, the LED lights are now joined together by a full-width strip that bissects the bootlid.

Inside, the Panamera is largely unchanged, bar an infotainment system that boasts higher-resolution graphics, improved voice control and the ability to wirelessly connect via Apple CarPlay. The limited changes are good news, because the opulently appointed and beautifully finished Panamera still boasts one of the slickest cabins in the business. Better still, you sit low in the Porsche and the wide range of seat and wheel adjustment makes it easy to get comfortable. Our car was further improved by its slightly smaller-diameter GT steering wheel (£201). 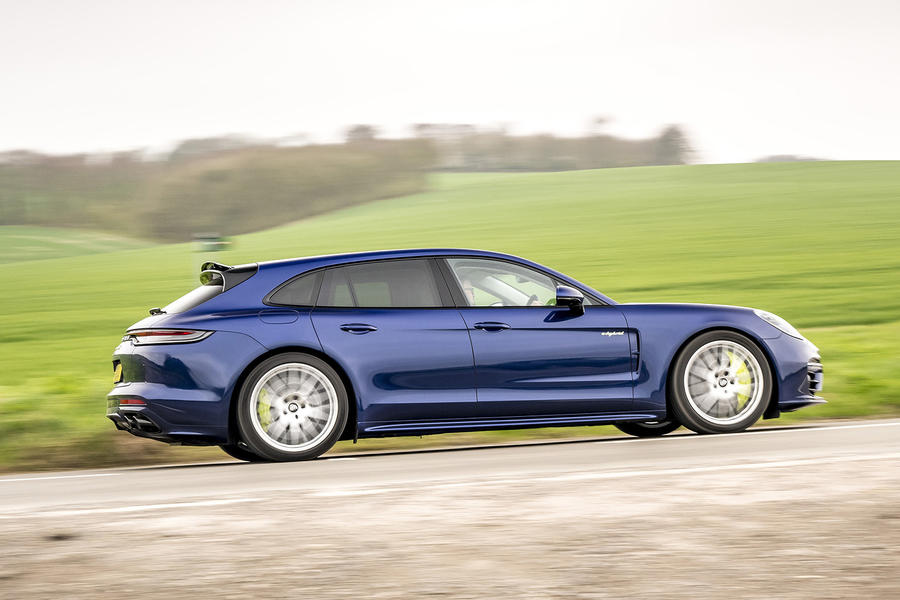 As with all E-Hybrids models, the Turbo S springs noiselessly to life. In the all-electric E-Power and Hybrid modes, the car will always start off on battery power alone, using just the 134bhp motor. Performance is adequate rather than, ahem, electrifying, but there’s more than enough muscle to keep up with the flow of traffic and in E-Power it’ll carry on accelerating to 84mph.

This whisper-quiet, easy-going approach is enhanced by impressive rolling refinement, the air springs soaking up bumps with a supple aplomb that’s not far off a Mercedes-Benz S-Class. Only really nasty potholes elicit an intrusive thud from the suspension, but given the car rides on 21in alloys, that’s to be forgiven.

Twist the steering wheel drive mode controller to Sport or Sport Plus and not only are the adaptive dampers and PDDC tautened but you also wake the V8 from its slumber. It sounds good, in a distant thunder sort of way (even with the £2537 optional sports exhaust, the volume never gets naughty), plus it adds some real urgency to the acceleration, although it never feels as fast as the numbers suggest.

Make no mistake: this is a seriously quick car and the internal combustion and electrical elements are integrated superbly well, but the combined effects of the 2365kg kerb weight, the smooth-shifting eight-speed PDK and a rather dead and heavy-feeling throttle pedal means the Turbo S never quiet responds with the instant, catch-your-breath violence that the near-700bhp headline figure would have you believe. The non-hybrid cars have more natural and proportional throttle response.

It’s a similar story in the corners, where the E-Hybrid’s extra mass makes it feel a fraction lazier. That said, the meaty and well-connected steering allows you to place the car just-so, while the four-wheel steering has a shrink-ray effect, particularly through quicker changes of direction, where the Porsche feels far more alert and up on its toes that anything this size has any right to. Then on the exit of corners, the torque-vectoring rear diff gives you just enough on-throttle rotation to get the car pointing straighter, sooner for a slingshot exit. The vast carbon-ceramic brakes deserve mention, too, thanks to the nicely weighted pedal and the tireless way they haul the heavyweight Panamera down from big speeds.

Even in its most aggressive settings, the suspension retains a delightful compliance, giving you the feeling that the car is just floating over but somehow always connected with the surface. Either way, body control remains resolute, the Panamera refusing to be rattled by even the most severe compressions or crests.

Knock the car back into Hybrid mode and it returns to being a soothing and sybaritic luxury saloon, which makes it a serene and effortless long-distance tourer. As before, the interior is beautifully finished and spacious while, to these eyes at least, the Sport Turismo looks better than the standard car and has the added benefit of a bigger and more versatile boot to, erm, boot. 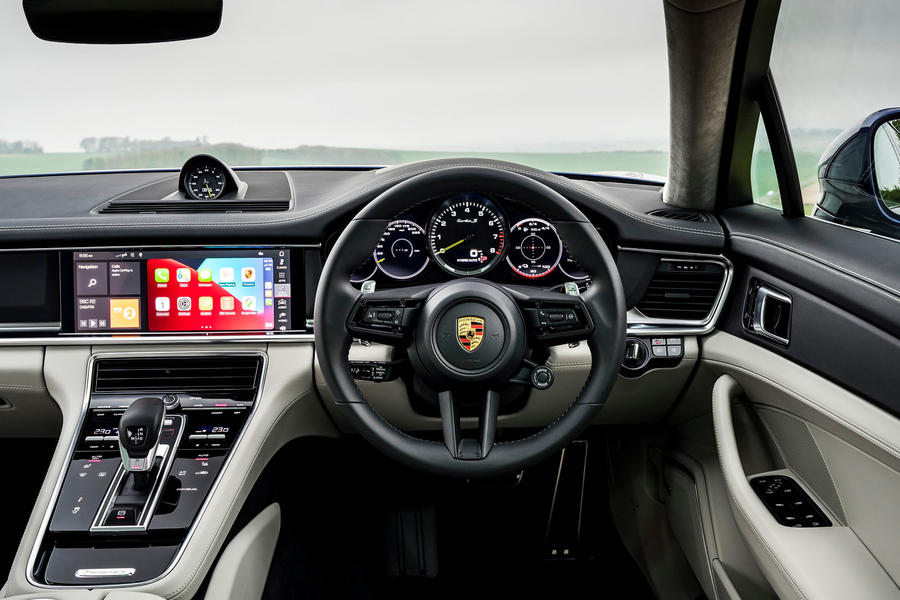 The extra electric range and increased power are certainly welcome, but the SE Turbo E-Hybrid is still overshadowed dynamically by the lighter, faster, even sharper and £4520 less expensive non-petrol-electric Turbo S.

If you really want the theoretical cost-saving benefits and a daily dose of EV running, then the cheaper E-Hybrid models make more sense. And if you want to take a bigger step toward electrification and have all the Turbo S’s performance? Well, there’s always the Taycan. 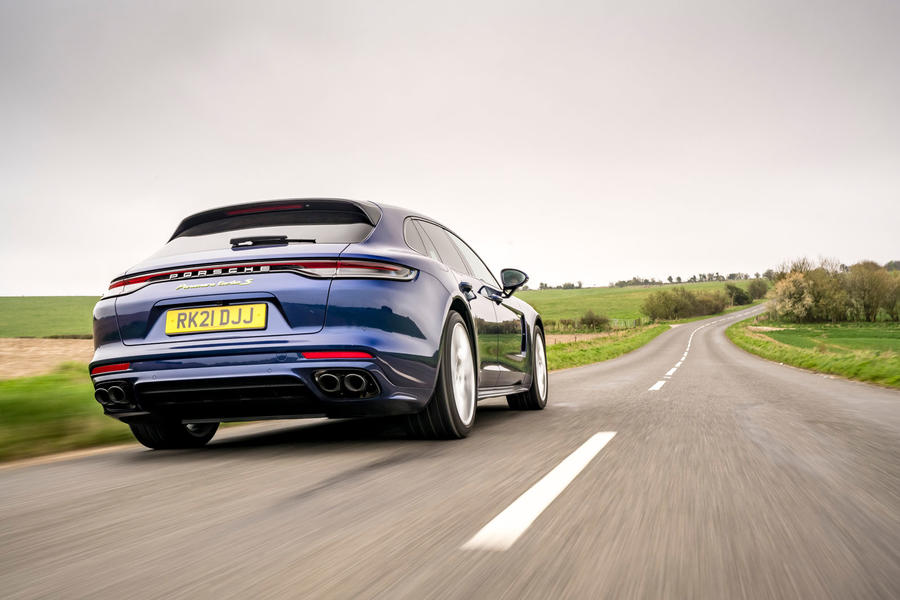 Log in or register to post comments
si73 15 April 2021
The panamera has become a very handsome car compared to how it was when launched, I especially like the sport turismo versions styling, I think I'd forego the phev version for straight petrol or the similarly styled taycan.
xxxx 15 April 2021

Agreed it should be read, especially the bit about 1.5kw per mile, around 1kw in the real world. So inefficient it deserves to be read twice.

Has anyone actually read this article?