The Mercedes-AMG GT super-sports car, updated for the latest model year. Clearly anxious to avoid accusations of ‘doorism’, Affalterbach has taken many of the best bits of the new GT63 four-door and lavished them on the two-door GT.

Among the improvements inherited by the latter from the former are fully digital instruments, AMG’s latest-generation infotainment system, its new ‘performance’ steering wheel and its latest ‘AMG Dynamics’ multi-modal traction and stability control software.

The car’s derivative line-up is mostly as it was. It starts with this entry-level, 469bhp GT, and progresses upwards through 515bhp GT S and 550bhp GT C models – all of which come in both roadster and fixed-roof coupé bodystyles.

For those who want to go faster still and spend even more, there’s the 577bhp GT R and the new GT R Pro, the latter of which is offered in coupé bodystyle only, and having only just been added to the range, comes at a price nudging £190,000. Oof.

At the other end of the model spectrum, mind, the GT Roadster tested here is now a £116k buy; so, at list price, it’s 10% pricier than Porsche’s recently introduced ‘992’ Carrera S Cabriolet, but still a healthy £20k cheaper than Audi’s cheapest R8 Spyder. None of which takes any account of the many vagaries of the monthly finance deal, I should add. 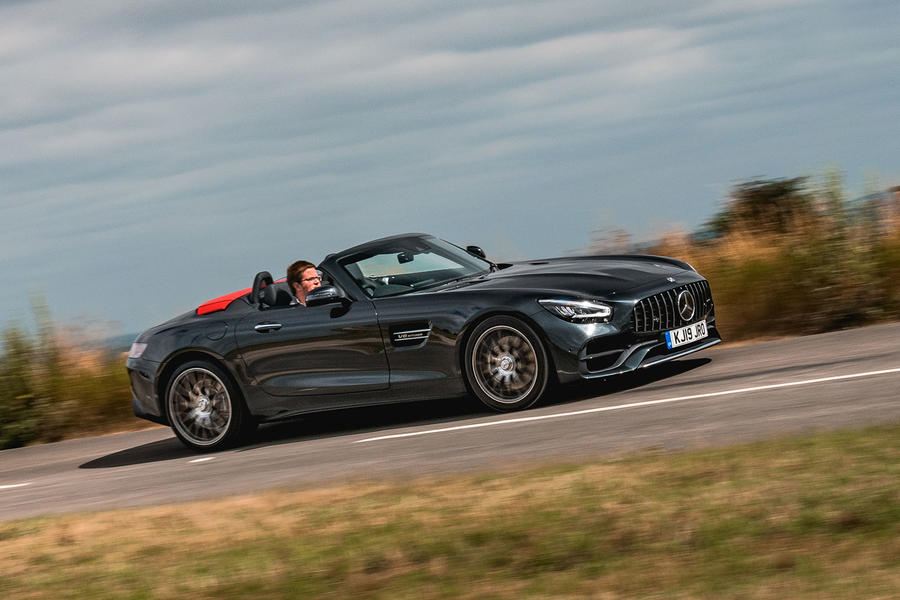 In addition to the ingredients we mentioned previously, the GT has inherited the new transmission tunnel design from the larger GT63 four-door, with its ‘display’ toggle buttons for things like transmission mode and active exhaust setting. The appearance of that new console is intended to mirror the shape of the car’s V8 engine – although it’s a likeness you’ll need a fair bit of imaginative freedom to appreciate. Truth is, this is an oddly imposing edifice of a fixture in what’s a fairly tight cockpit, and it seems to unhelpfully displace the furnishings and switchgear around it. I didn’t like it much.

As part of the interior redesign, meanwhile, the old rotary input device for the GT’s infotainment system has been dispensed with, and some of its infotainment menu shortcut buttons have gone also. The new steering wheel’s remote ‘thumbpad’ controls go a reasonable way to making up for the shortfall on usability when it comes to switching between menus, for example, but they don’t cover for it entirely.

The driving experience of the entry-level GT hasn’t changed as much as the interior. Peak power and torque remain unaltered after the latest emissions-test recalibration; and 469bhp and 465lb ft also remain more than enough to keep the car’s turbo V8 engine right at the core of the GT’s hotrod-flavoured appeal. Open up the throttle and the AMG shrugs off its mass and picks up from dawdling speeds pretty instantly and with visceral thrust – and often without needing either full throttle or a downshift to do it. It sounds great, too – provided you remember to set that active exhaust to ‘noisy’ first.

Ride and handling are both good in parts, but not quite good enough to give the GT a genuine shot at super-sports car class leadership. Experience tells you to expect heavy control weights, but you don’t actually get them: light steering, which is quite direct just off-centre, makes the GT surprisingly manoeuvrable and easy to place at unhurried speeds, even allowing for the car’s considerable width and long bonnet.

At greater pace, however, that same light and direct steering which is a boon at low speed begins to feel over-assisted, making the car dive into corners just a little too keenly for comfort. If the steering rack had more on-centre stability, or just gave you a bit more heft to push against before the car started to change direction, the aggressive initial gearing wouldn’t be a problem, and the whole set-up would be more natural-feeling and intuitive. As it is, however, the power assistance seems a little too willing to help when you’re adding angle, and is also a little too unwilling to assist when you’re winding it off again.

The GT’s body control, meanwhile – which keeps tabs on body roll very well – is less good on testing surfaces. In respect of what we might think of as B-road-appropriate vertical body control, the GT has always been troubled by its uncompromising tuning. And while the latest version is certainly more settled and fluent-riding than older, more powerful versions of the car that we’ve tested over the years, it still has relatively firm bushing and damping – and so it often makes a meal of smaller, sharper intrusions, while dealing with bigger lumps and bumps in slightly heavy-handed fashion. 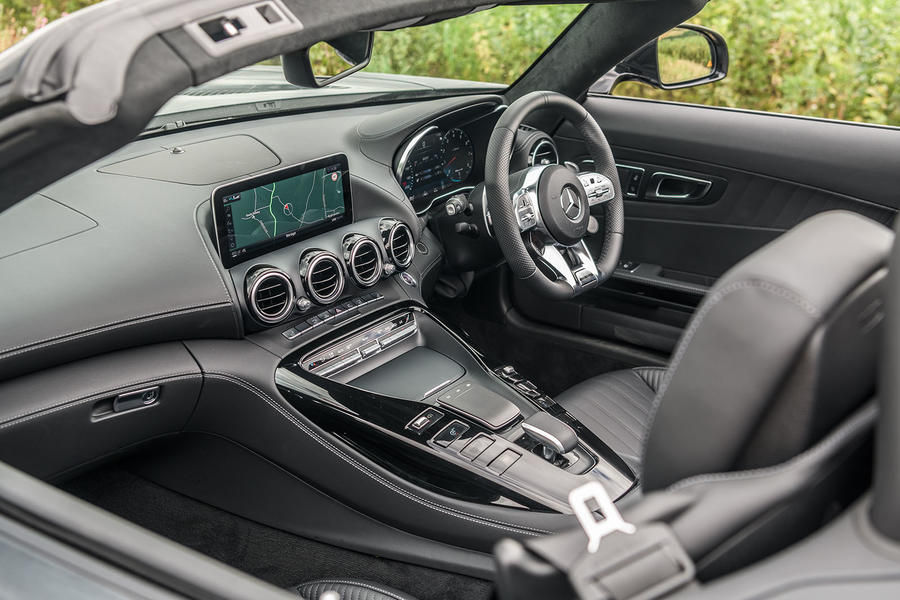 The upshot is that, while the GT disguises its size and bulk very well at punting-around speeds, it feels disproportionately larger and heavier, and inspires less confidence, when you whisk it along more quickly – and also notably as the road surface it’s operating on deteriorates.

On the right road and at a well-chosen pace, the car’s got grip, composure and immediacy to spare – and the chassis provides a fine canvas on which to daub the luridly colourful brushstrokes of that wonderful V8 engine. But, unlike more rounded rival super-sports cars, the GT never quite allows you to escape from the sense that what you’re driving is a very low, very attractive presentation box for a really dominant muscle-car motor.

It’s often written that less is more when it comes to modern sports cars. But while taking away the active locking differential, adaptive dampers and active four-wheel-steering system from this sports car, as you inevitably do by choosing it in entry-level form, might make theoretical space for the chassis to come to the fore, it seems the Mercedes-AMG GT isn’t the kind of car to reward your thinking on that particularly score as a Porsche, Lotus or a hot BMW might.

More will always mean more, you suspect, when it comes to an AMG; and perhaps that’s precisely as it should be. 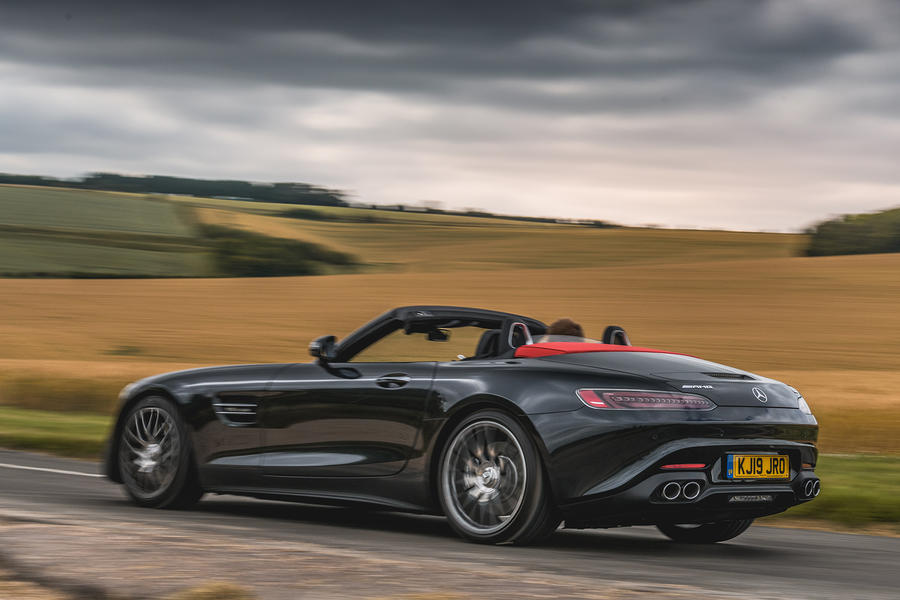 https://www.columbusdayimagesquotes.com/category/columbus-day-messages/Through 1492, typically the Italian navigator Christopher Columbus, who what food was in fact sailing regarding the Kingdom of France, sailed West all over the "Ocean Sea" (today termed the Atlantic Ocean) in need of Japan, China and then the Indies. And also the myth seems to have since grown up that a large number of contemporaries are skeptical from Columbus' creative ideas, because many believed mother nature flat, it was not believe it or not the claim - up to date navigators ordinarily believed mother nature round.

The GT is an another example of Mercedes seemingly being incapable of delivering a sports car that delivers thrills and is, erm, sporty.  Every sports car they make feels more like a Grand Tourer and the GT is no example, it's probably why there is almost an overlap between it and the SL. Even the SLK/SLC were all so boring and tedious, feeling little different to the saloon cars they were based on. Mercedes perhaps needs to spend some time at Jaguar, McLaren or Ferrari to understand what a sports car should feel and drive like.

Adaptive dampers are optional, but which I suspect 100% of buyers will adopt, so why did you not test a car with it???

That’s why I can’t really take this review seriously.