From £218,02010
Woking's most focused Super Series model gets even more circuit-friendly to compete with the Ferrari 488 Pista and Porsche GT2 RS
Open gallery
Close

You are forgiven for thinking McLaren Automotive – the marque’s increasingly successful road-car division, in operation since 2010 – has been requisitioned by the good people of McLaren Racing.

In no time at all, we’ve been handed an embarrassment of track-day riches. There is, of course, the mighty Senna – a heavily circuit-biased supercar that follows the function-over-form mantra to an almost comical degree. It’s the quickest car this magazine has ever tested but can, alas, quickly drill you into a tired stupor on the road.

Then there is the 600LT – a stripped-out, aero-clad version of the McLaren’s brilliant, more accessible Sports Series model. If you want a McLaren it’s the current sweet spot, but don’t let the fact it works so freakishly well on the public highway (albeit a relatively smooth one) obscure its true raison d'être: track days.

There is more. Only last week news broke of a road-illegal Senna GTR with slick tyres, GT3-spec suspension and a diffuser that belongs at La Sarthe. The engineers at Woking claim the car will generate a tonne of downforce, which means it will be scary close to pulling off that famous old F1 trick of being able to drive on the ceiling. Theoretically. Chief test driver Kenny Bräck will surely give it a damn good go anyway.

Is this not precisely what would happen if a racing outfit got the keys to the product-planning department?

And now there is this – the 720S Track Pack. It’s a package McLaren has already applied to the 570S, both in coupé and Spider form, and with one in 10 orders specifying it as an option for those models, there is clearly an appetite for something a little bit raw, if not in substance then in style. 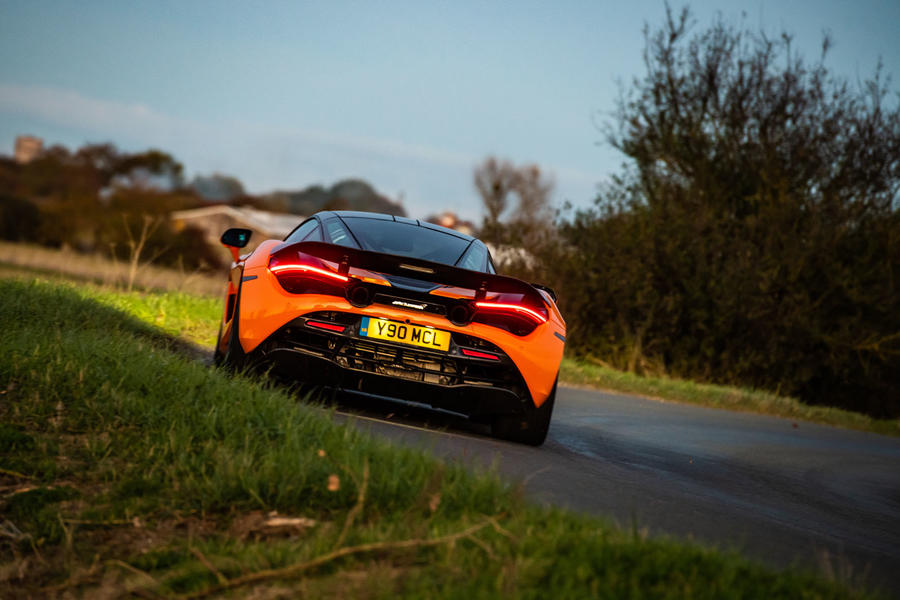 The motorsport expertise that allows McLaren to pull off cars such as the McLaren Senna is shot through all the marque’s products, so compared with the competition the McLaren 720S already feels considerably track-optimised.

The scuttle is sensationally low, and the Monocage II carbon tub that partly facilitates this design gives the chassis massive torsional rigidity. The brake pedal is also offset to encourage the driver to use his or her left foot, and to that end there’s relatively little servo assistance. Wonderful. There is no switchgear on the steering wheel, either – none at all – and for this tester the driving position is beyond reasonable criticism.

With a dry weight of 1283kg, the 720S is also light for something not only carrying a 4.0-litre twin-turbocharged V8 in its belly but with a footprint close to that of a 5 Series. The Track Pack takes another 24kg out of the equation with the generous use of carbonfibre and a set of ‘super-lightweight’ forged alloys shod in Pirelli P Zero Corsa tyres. In fact, it must save more weight than that, because a titanium harness bar (redundant in the case of our test car) has found its way into the cabin. Golly it looks good, but poor surfaces elicit the irritating squish of metal on leather in our 1800-mile test example.

A development engineer would identify the dynamic consequences of those changes but, on the road, with its many variables, I can’t pretend to have noticed any meaningful difference. The 720S remains wickedly slick on the move. The delicate hydraulic steering is perhaps even more of a pleasure to interact with through the Track Pack’s Alcantara rim, but the star of the show is the Proactive chassis, which with its cross-linked dampers is left unaltered. In any of its three modes, the set-up serves up a hallmark blend of gentle but unbreakable control, unless you’ve found a particularly unloved B-road to splice along. Elsewhere, it is the stuff of magic carpets.

The more easily appreciable elements of the Track Pack are also satisfying. The carbonfibre racing seats, available in two sizes, will cup the buttocks, hips and ribs of both you and your passenger magnificently and are a lasting source of confidence. The sport exhaust also gives the 720S a valuable injection of passion at the top of the rev range, and the flat-finished carbonfibre dotted about the carbon suits the car’s Silicon Valley vibe. There’s plenty of carbon on the exterior, too, and in combination with the McLaren Orange paint you have to say that the 720S has never packed quite such a hard optical punch.

McLaren has elected not to massage any more power from the engine, but with 710bhp arriving at 7500rpm and a mammoth hit of 568lb ft at 5500rpm, it’s hardly needed. You will not have any difficultly unsticking the 305-section rear tyres whatseover, and in the wet the 720S elicits an old-school fear factor that’s actually pretty refreshing so long as you’re on your mettle.

But precision, communication and balance are the central tenets of the 720S driving experience and, so long as you’ve a healthy respect for the power, they combine to let you sensibly approach the limits of grip and traction. Mind you, this is very much a case of ‘they all do that, sir’, and the Track Pack’s addenda feel largely superficial in this regard. 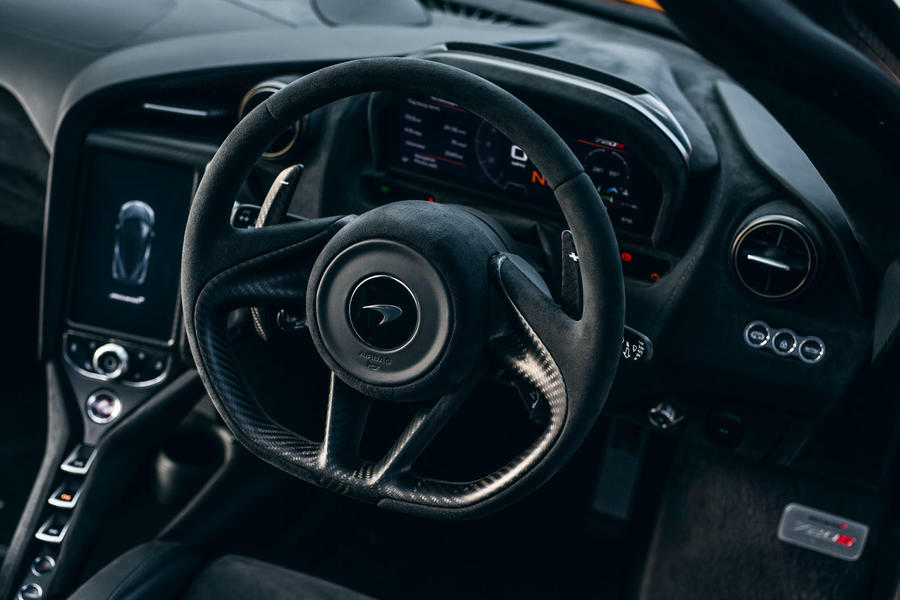 That depends on what you want your 720S to be, and there is indeed a choice. This seminal Super Series McLaren is versatile enough to fulfil the duties of either a super-GT or a highly focused track-day car, with several intermediate roles.

If you’re for the former, then stick to ‘Luxury’ trim and throw leather at the interior. Honestly, you couldn’t want for a more acquiescent but involving mid-engined super-cum-hypercar, and without the harness bar there’s useful luggage space on the rear deck.

This Track Pack is aimed at the other cohort: those willing to spend £28,360 in excess of the £224,700 McLaren asks for the ‘Performance’ model.

That is an awful lot of money considering you might never use the telemetry or the cameras or the six-point racing harnesses, but for some it will be worth paying simply for the palpable sense you’re driving the most focused 720S that exists. At least until those Nomex-wearing product planners give us the Longtail version. 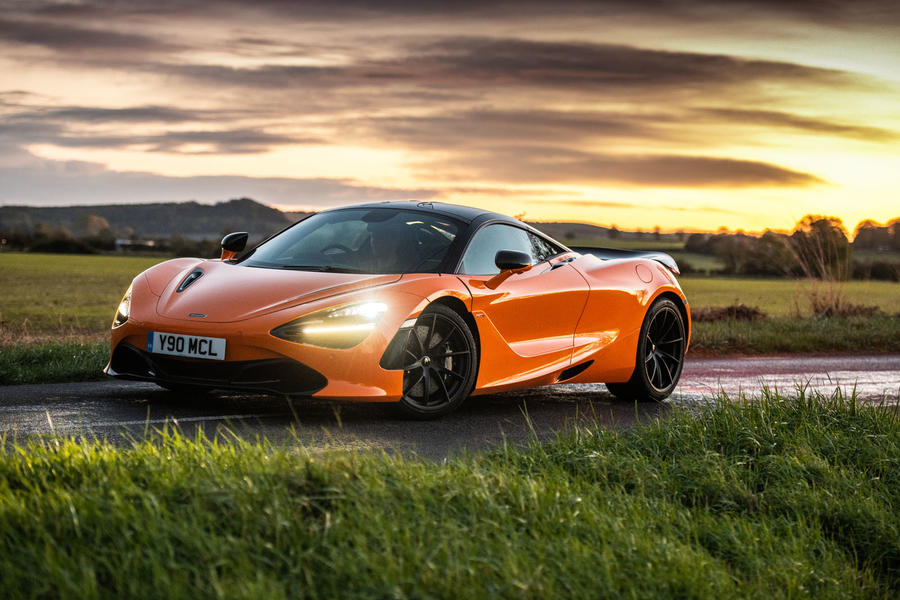 The organization of Tom Haughton Winnipeg is widely famous for the adoption of cats. Like dogs, cats also find it very difficult to survive and live. Because there are many wild animals living around and it becomes very difficult for these domestic animals to survive.

Regardless of what you think

Regardless of what you think of the car I have to congratulate the photographer. The papaya colour contrasts perfectly with the environment but this harks to the good old days of car magazine photography.

I think the Track Pack seems pretty poor value for what you get, but does become greater than the sum of its part once on the car? I'd have to have a go to find out..

Staff photographer Olgun Kordal was behind the lens – I'll pass on the compliment.

At least they use their own tin

Unlike Lamborghini (who you said you prefer to Ferrari in the Pista comments), who do exactly the same thing but with various tins lifted from Volkswagen.

Or would you prefer McLaren if they made an SUV based on an F-Pace chassis? Would that give them the same soul as VAG era Lambo?

Unlike Lamborghini (who you said you prefer to Ferrari in the Pista comments), who do exactly the same thing but with various tins lifted from Volkswagen. Or would you prefer McLaren if they made an SUV based on an F-Pace chassis? Would that give them the same soul as VAG era Lambo?

. Yes, your right, Ferrari is just a small company within Fiat, Ferrari have an SUV coming soon too, their masters control the purse strings, so where’s the difference?

Yes, your right, Ferrari is just a small company within Fiat, Ferrari have an SUV coming soon too, their masters control the purse strings, so where’s the difference?