From £260,0408
Is an upgrade to 730bhp and the addition of four-wheel steering enough to realise the Aventador's potential?
Open gallery
Close

If the new Aventador S has a job to do - over and above the usual one of providing the most dramatic and attention seeking way of getting from A to B - it's to prove to the world that Lamborghini's 'super sports car' can be as much about substance as it is style.

The original Aventador LP700-4 remains a spectacular looking supercar, underpinned with a genuinely impressive push-rod suspended all-carbon chassis and a thumping 690bhp naturally-aspirated 6.5-litre V12. No mistake, the Aventador is the 'proper' Lamborghini for those who consider the Huracan merely an Audi R8 in Italian designer clothes.

But for all the rebellious, hairy-chested tradition drawn from the Miura, Countach, Diablo and Murcielago the Aventador has been accused of being somewhat dumbed down in the driving stakes. Sure, it was fast, noisy and bold. But also heavy, blunt and with a handling balance tipped more toward 'safety' understeer than white knuckle thrills.

The limited production SV version launched in 2015 proved that with a few dynamic tweaks and a little extra power there was potential in the Aventador to ruffle a few feathers in the supercar establishment, exactly as the brand has since its founding in 1963. By stripping out 50kg, increasing the power from 690bhp to 740bhp, adding the controversial variable ratio EPAS Dynamic Steering and improving the car's aero Lamborghini was able to get within a whisker of the Porsche 918 Spyder's Nurburgring lap time. Not bad for a car relying on good old fashioned V12 grunt over hybrid gimmickry and with a list price about a third of Porsche's technical tour de force.

For the new Aventador S Lamborghini has carried over some of what it learned from the SV - Dynamic Steering included - while increasing power to 730bhp. It's also added that latest supercar must-have - four-wheel steering - and thoroughly reworked the suspension, aero and control systems. Impressively it's done all this without adding to the baseline kerbweight, which remains at 1,575kg by Lamborghini's preferred 'dry' figure. To put that into context a Huracan is 1,422kg by the same measure.

Still hefty but with more aerodynamic grip and increased agility from the four-wheel steering Lamborghini clearly hopes to address those criticisms about the Aventador's lack of dynamic sparkle. Just in case you thought it was in danger of taking it all a bit too seriously it's also added a new configurable driving mode over and above the familiar Strada, Sport and Corsa settings and called it 'Ego'.

Further evidence the S upgrades are more about handling than bottom line stats comes when you browse the spec sheets. The 219mph top speed remains as before and the 0-62mph time is also identical to the LP700-4's at 2.9 seconds. It'll push past that to 125mph in 8.9sec from rest while 0-186mph takes just 24.2sec. Be under no illusions, the Aventador S is a ferociously fast car and underlines quite how outrageous that V12 remains, even in this age of hybrid assistance. Forget any electrically assisted pretence of saving the planet while travelling at 200mph though - updated or not the V12 still chucks out a suitably unapologetic 394g/km of CO2 while achieving just 16.7mpg on the official combined cycle.

Prodigious straight-line speed and profligate fuel consumption are a given in a V12 Lamborghini of course. What the four-wheel steering and other changes bring is vast scope for the engineers to tune it to be as keen to go round corners as it is make lots of noise about going fast and burning lots of fuel. As in other applications the four-wheel steering can turn the wheels in opposite directions to effectively shorten the wheelbase for greater agility in low speed corners while going the other way for high speed stability.

Meanwhile the variable steering can go from 2.1 turns lock to lock to 2.4, offering scope for front-end bite as well as relaxed cruising and good manners around town. Where, let's face it, most Aventadors spend their time. For those who dare to go on track 130% more downforce at 150mph from a new front bumper and splitter further emphasises Lamborghini's efforts to improve the front end grip, suggesting it's listened to the earlier criticisms. Does it all work though? 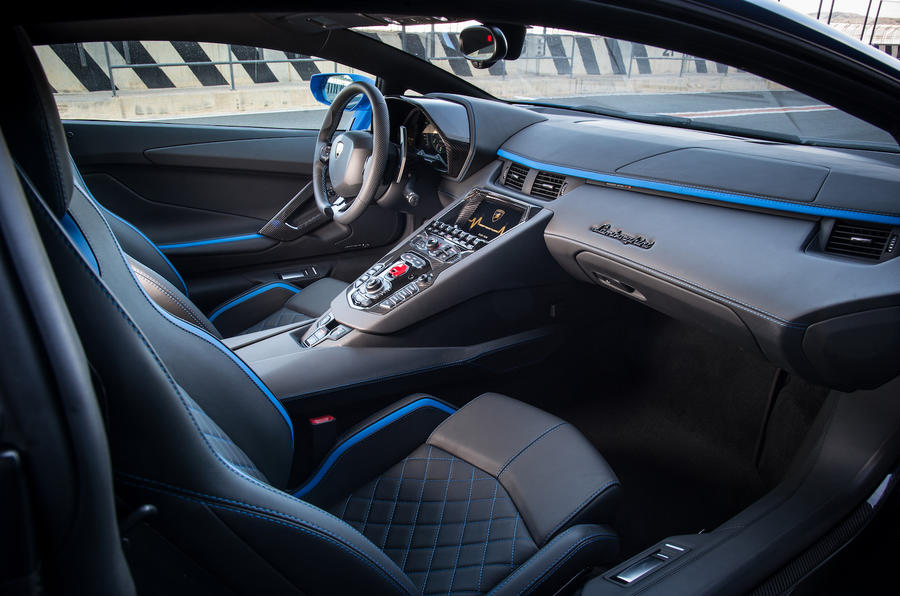 Freak weather on the Valencia-based launch event somewhat scuppered Lamborghini's desire to demonstrate that it has. Four-wheel drive or not, a waterlogged track in the midst of the region's biggest storm in decades is not the best place to be putting a 730bhp Lamborghini through its paces. The road route wasn't any better, the mountain roads actually closed by snow.

When the track eventually opened it was strictly controlled ducks and drakes (appropriate term, given the conditions) behind cautious instructors. But even at this pace the work that's gone into this new S model flagship is evident. Working through the modes Strada maintains the surprisingly ponderous feeling you could get from the LP700-4. Unlike most competitors Lamborghini has stuck with a single-clutch automated manual - dubbed ISR - rather than a faster, smoother dual clutch. The engineers will tell you it's for reasons of weight and packaging but, in the faster modes, it's also more 'dramatic' in the fearsome way it swaps through the seven ratios available.

In Strada though it's hesitant and long-winded in automatic and slow to respond to the paddles in manual. The conservative front to rear torque split of 40:60 also means little choice but to tread carefully into the corner and then bide your time on the way out. In the wet, Sport is much more exciting, sending up to 90% of the drive torque to the rear axle and letting you dial out mid-corner understeer on the throttle, the car rotating with commendable predictability considering the variances in steering lock, effective wheelbase length and rear-wheel steering.

In this mode the stability control is sufficiently lenient to demand assertive corrections in slippery conditions too. Corsa throws in brutal gearshifts you really don't want to be unleashing mid-corner for fear of destabilising the car and a more neutral torque split that'll send up to 80% to the rear axle. Perhaps more suited to a dry track, on the day the car understeered stubbornly before eventually sending drive to the front axle to pull the car out of the corner. Ego, for all the novelty value of the name, simply lets you mix and match your preferred settings for steering, powertrain and suspension from the above. 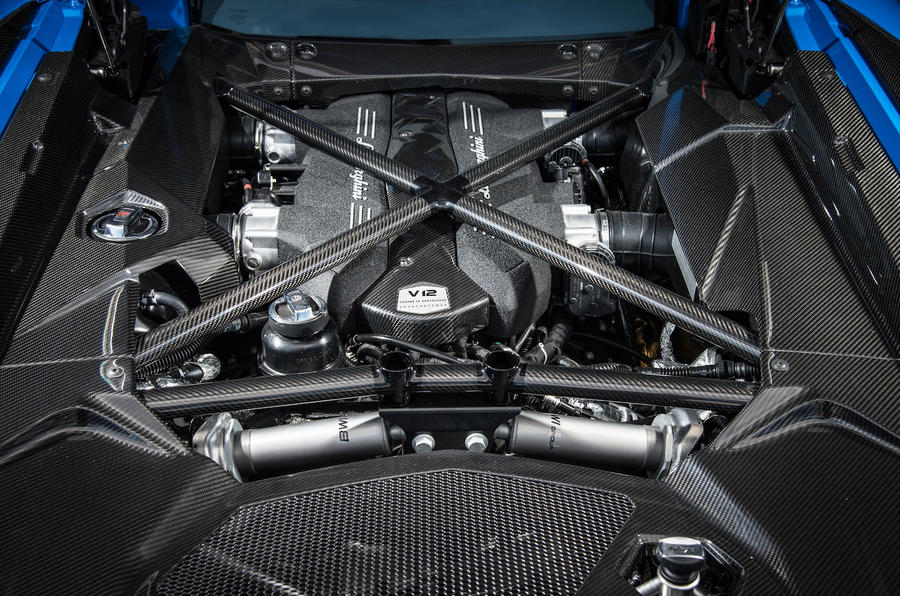 That there's so much to play with and adjust in the way the Aventador S drives is a significant progression from the LP700-4, which very much had one way of attacking a corner and offered few options beyond that. Rather than a death grip at the wheel and gritted teeth you now drive the big Lambo with something close to fingertip precision. It's no Lotus Elise in terms of finely balanced nuance and feedback but it's finally got the handling to do justice to that magnificent powertrain, the exotic looks and the sheer force of character.

It is, in other words, a much more sophisticated and rewarding car without diluting the raw excitement any V12 Lamborghini should deliver. Big, brash, unapologetic and thrillingly fast this is a true supercar in the finest traditions of the brand. It won't win over those who think it a bit much. But for those of us who take a childlike glee in such cars still existing it's nice to know it delivers on the looks at last.

...may own 55 other cars, a yacht, part of a bus shelter and the contents of a saga cruise ship, however where do you put a Labrador?

When will lambo realise that they should add a wooden box on the back for a dog? I won't buy one until they do.

P.s. I would give my internal organs up for auction to have one of these.

Bah, you should have put

Bah, you should have put Sottozeros on and gone in the snow, like most of us do in the real world,driving our sports cars and saloons in winter.No garage queens!
View all comments (5)