9
Super Series McLaren joins the roadster ranks to rival drop-tops from Ferrari and Lamborghini. We drive it in the UK for the first time
Open gallery
Close

There are lots of big numbers associated with the McLaren 720S Spider, but here's a small one: 12%.

Admittedly, in the context of a car that costs £237,000 and will out-accelerate almost anything the safe side of a competition dragster, any improvement in over-the-shoulder visibility seems an irrelevance. But this is McLaren, and so an incremental gain in this undervalued area of supercar design has been not only made but also quantiifed. As ever, the details really matter.

It’s one of a small number of changes that happen when 720S becomes 720S Spider – a car we've already driven, but until now never on British roads – and results from the use of transparent glazing for the new buttresses, which pivot open when you hold down a toggle on the centre console and peel back the new carbonfibre roof. The whole process takes just 11sec.

Elsewhere, the carbonfibre Monocage II tub has been relieved of its central spine – fairly obviously, as this usually runs lengthways above the cabin – and the rear portion of the structure has been adapted to house the roof and its associated mechanicsm. The new structure is known as the Monocage II-S and remains spectacularly stiff.

The mechanism itself deserves attention, too. Rather than being hydraulic, its uses eight electric motors to silently raise or retract the roof at vehicle speeds of up to 31mph (versus 18mph for the old 650S Spider). It's also light, and with no strengthening required for the tub, the Spider weighs only around 50kg more than the coupé. Its dry weight is a mere 1332kg.

It means that, in terms of performance, there's almost nothing between coupé and Spider. Both hit 62mph in 2.9sec and only by 124mph, which arrives after 7.9sec, does the coupé pull out – and even then, only a nominal tenth. The drawback for Spider owners is that their car is limited to a mere 202mph when the roof is stowed away and head room endless, but even if you live among the German autobahns, this is a technicality, and with the roof in place, you'll manage the full 212mph, just like the coupé. 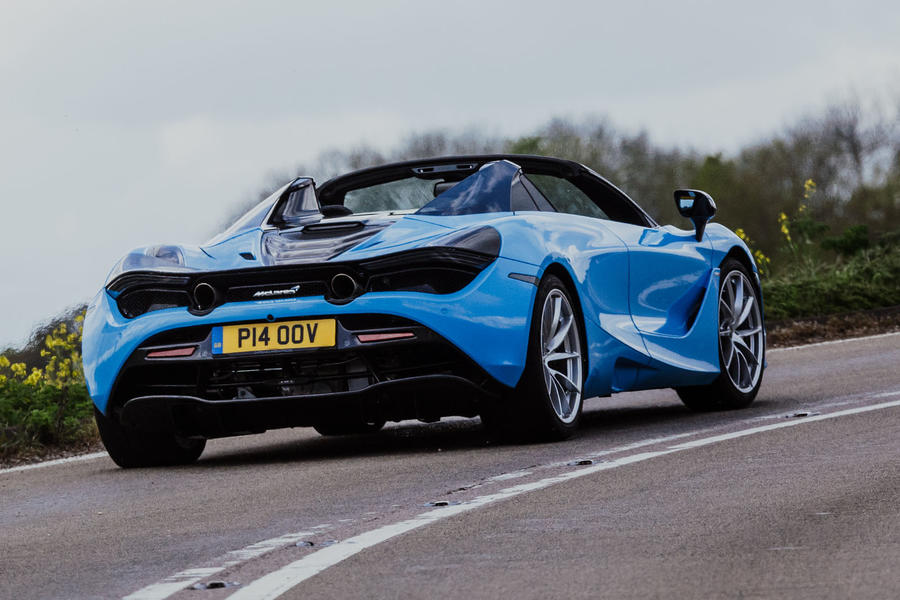 With the roof up, the driving experience is indistinguishable from that of the coupé.

Make no mistake: this a major – and possibly unique – achievement and a big selling point for the 720S Spider. No comparable open-air machine has the same steering precision or immediate body control, which combine to make for awe-inspiring direction changes. In less than perfect conditions, you'll get a little understeer through slower corners, but the Spider generally swoops around bends with phenomenal accuracy, security and front-end feel. No change there, then.

New to the Spider is a rear windscreen that drops down into the firewall between the engine bay and the cabin, roof still in situ, which is something you can’t do on the coupé. It’s a lovely bit of theatre. You not only get properly acquainted with McLaren’s heavily turbocharged 4.0-litre V8 – which is, if nothing else, brutally loud near an 8500rpm redline and more flambouyant than ever in its distinctively pneumatic, breathy manner – but also the lake of heat that collects above the carbon engine cover washes into the cabin with every forceful application of the brakes. You literally bathe in this engine.

Sophisticated? Not especially, but for a car that generally struggles to engage its driver on an emotional level, it does the trick.

And then you lower the roof. From here on, the 720S Spider ceases to simply feel frighteningly fast and begins to seem incomprehensively so. For the full effect, you wind all the windows down and slip the powertrain into Track mode, at which point the short exhaust issues an uncomfortably loud explosion with every near-instantaneous downshift from the seven-speed dual-clutch transmission. The sense of chaos created by 710bhp and 568lb ft, the whirlwind within the cabin and the speed at which the scenery slips by is accompanied by calm, clinical handling. It's a strange juxtaposition, but an enjoyable one.

Crucial to the satisfaction of driving this car – and to that enjoyment – is the chassis. At speed, the ride is so good that you simply stop thinking about it, and given the 720S Spider will gobble up 20mph increments in less the two seconds at full throttle, that's exactly how you'd want it. The lack of roll is startling, in fact – and thanks in part to McLaren's efforts in setting the engine a whole 10cm lower than it was in the old 650S – but it's the way any movements are so quickly and deftly suppressed that takes your breath away. Mid-engined supercars often ride with more panache than you're expecting because, with less weight to support over the axles, the spring rates can be dialled back but, even so, the 720S Spider is at times mesmerisingly supple.

It is, we should say, also possible to sit back, raise the side windows and rear screen, set the cross-linked suspension at its softest (essentially, you allow the hydraulic fluid to flow through the system more freely – there are no anti-roll bars) and cruise with little in the way of buffeting or wind noise. The power delivery is boosty as always, but otherwise you could as well be driving a Mercedes E-Class cabriolet. Try that in an Aventador. 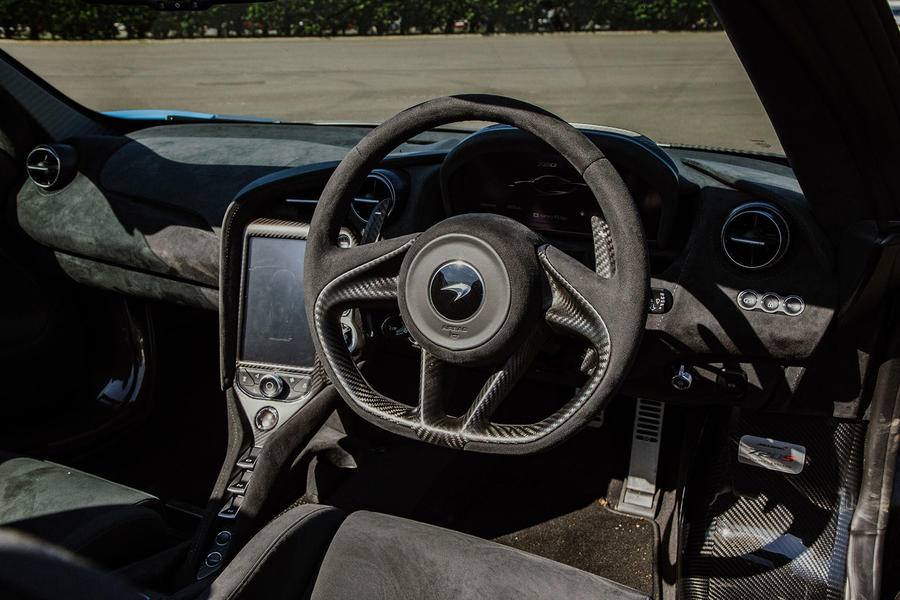 Autocar quite likes the 720S coupé and we've written at length about the car's superb electro-hydraulic steering, outstanding ride quality and all-round usability, which is totally out of kilter with this level of performance.

The Spider is the same – 12% better in one respect, even – but those willing to pay the extra for a senior supercar that can go topless will have different priorities from those who'd only ever want the hard-top. They'll be prepared to trade less focus for greater flair; and for all its brilliance and 'completeness' elsewhere, the fact is that this McLaren doesn’t offer quite the same theatre as alternatives from Ferrari and Lamborghini.

Even so, and even with four extra cylinders and a willingness to make that fact known at any and every opportunity, the case for the Lamborghini Aventador S Roadster is difficult to make because the McLaren is simply much more rewarding to drive. The Ferrari 488 Spider is a tougher competitor. With a sweeter twin-turbo V8 and more playful handling, it just about beats the McLaren for overall drop-top appeal, although in character the two could hardly be further apart and each holds immense appeal. The new Porsche 911 Speedster is the wild card. It's an unconventional rival but sensationally good to drive, brimming with character and every bit as special.

Can you go wrong? Given the calibre of the field, not really, but if you're wondering which of these cars offers the least compromise compared with its coupé counterpart, you're looking at it. 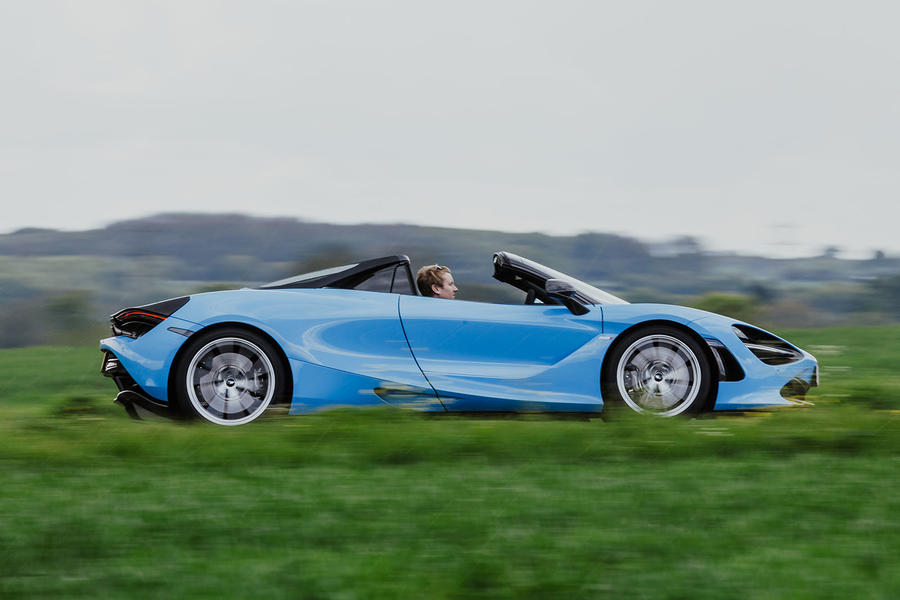 Got to drive 720s (not Spider) yesterday at a local specialist dealer before a 'Cars and Coffee' event here in Florida. As a Porsche guy, they don't really retail used Porsche, so have been trying to get me to trade and buy a used Macca from them (they have 2x P1 as well as multiple 720's and longtails!) Like many on the forum, the styling leaves me cold, and although driving experience is 1st for me, styling is also important. Interior wise the 720's was clinical in a Tesla sort of way, fast as hell in a 458/GT3RS sort of way, and overall a great, great drive. We got back, I got out, we talked, I looked at the car and had no problem walking away. It did not stir the sould like my Porsche GT cars do, or like a 458/488 does (i do not own). So I agree with most of the posters, McLaren has a great product, they just need to find that magic ingredient, that 'Mojo'?

lAMBO FOR STYLE FACTOR,  FERRARI FOR PEDIGREE AND MAC FOR EVERDAY USABILITY AND FUN,IF YOU WON THE LOTTERY IT WOULD LET YOU SHOW OFF IN THE lAMBO ,HAVE FUN IN THE MAC AND INVEST IN  A FERRARI ,POSSIBLY MORE LIKELY TO RETAIN VALUE IN THE LONG TERM.

GO OUT FOR THE DAY IN A BENTLEY ,DROP TOP OF COURSE,AND BE COLLECTED IN THE EVENING IN YOUR ROLLS ROYCE .That leaves Aston as a spare for the Au Pair.

Maybe ignoring styling in order to concentrate on driving dynamics is a McLaren strategy. Deliberately making ugly (or else bland looking) cars may even be a sublimal message which communicates McLaren's no compromise engineering.
The typical McLaren interior is not "pure" as some commentators defend it, but rather it has "don't care" written all over it.
View all comments (6)