From £40,4008
Does the least objectively sensible version of the new Defender have an ability to tug at your emotions?
Open gallery
Close

(Incidentally, I advise against browsing which old Land Rovers have been fitted with which engines and when and where, in case you want to lose several hours and start missing work deadlines.)

But now the Land Rover Defender V8 is back, unsurprisingly with the supercharged 5.0-litre V8 that Land Rover uses elsewhere in its line-up. The Defender V8 isn’t a product of the Special Vehicle Operations division but a regular Defender model, available alongside the rather more frugal versions.

I suppose, depending on where you live, what the regulations are and what kind of fuel is cheaply available to you, it could be the most sensible choice. But I suspect that it will sell because people want it – and because, one day, perhaps relatively soon, you will never be able to buy a new V8-powered Defender again.

While being a regular range-sitter and not an SVO model, it does still get some significant chassis changes over your regular diesel or Defender plug-in hybrid. The suspension settings have been recalibrated and there are new anti-roll bars to limit body movements and make the whole caboodle more precise. The eight-speed automatic gearbox and low-range transfer case remains, but standard is an electronically controlled limited-slip differential that will also torque-vector by braking, pulling on an inside-rear wheel to help the Defender turn.

All of this comes in both 90 and 110 forms but, somehow, the shorter, three-door model feels more appropriate.

There are V8 badges, blue brake callipers for show and 22in wheels with all-season tyres as standard, although you can downgrade to 20in wheels and fit off-road rubber if you want as a no-cost option.

Inside, it's darker than usual, with the dashboard and steering wheel spokes finished in crackle black (like non-slip pick-up loadbay paint) and a suede-like material covering the steering wheel and seats. But it’s still an airy interior, thanks to a big glass area. 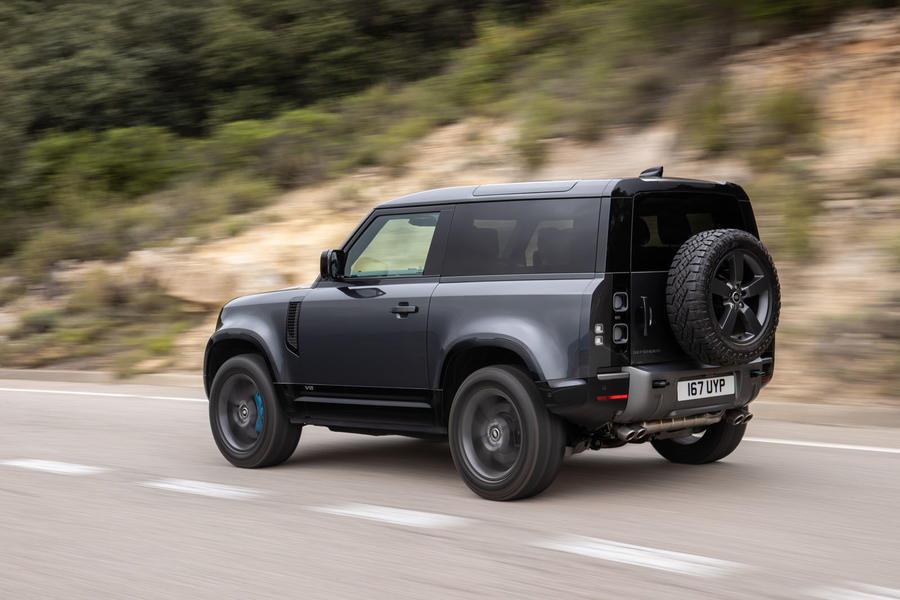 If you’ve just come from a long-wheelbase PHEV Defender, it takes only half a turn or so of that wheel to sense that things feel tighter and sharper in the V8. Partly that will be down to the suspension changes, but also the 22in wheels and tyres. It’s more immediate and responsive and precise, albeit still quite relaxed in the grander scheme of automotive things.

There’s an additional Dynamic mode on the Terrain Response system, which firms up the suspension further, but it’s a bit much for most British roads, on which the Comfort setting retains body movements well enough.

I drove a 90 V8 a bit on road and a lot off of it and a 110 V8 on the road only. Land Rover’s intention wasn’t to make the V8 the best of the Defenders off-road, but its engineers say there are circumstances where it is – particularly while rock-crawling, because you can easily dole out the grunt, and on steep inclines, because there's so much of it. It makes 518bhp and 461lb ft, after all, with peak torque arriving from 2500rpm.

It has quite a lot of different characters, this car. At low speeds on some of the slippery and wet bits around the Eastnor Castle estate that Land Rover rents as a 4x4 development centre, it mooches with generous wheel movement, easy, long throttle travel and a great-sounding steady rumble – not entirely unlike a Chieftan tank’s, curiously.

Up your speeds and things become rather more responsive. Across grassy fields, it does a passable impression of a rally-raid car, with long travel but superbly controlled movements as it jumps or and catches air, with the differential locking to straightening its line on corner exits and a tweaked rear brake pulling it in to turns.

Then on the road it’s smooth, refined and still very, very fast. It's not as raucous-sounding as fast Range Rover Sport SVRs – ever-tightening noise regulations mean that while you hear a powerful thrum inside, it doesn’t bark or pop or crackle (and it’s not an SVO, remember). Plus it's hopelessly thirsty: I saw 21mpg, but you can make that sub-20mpg without trying very hard. 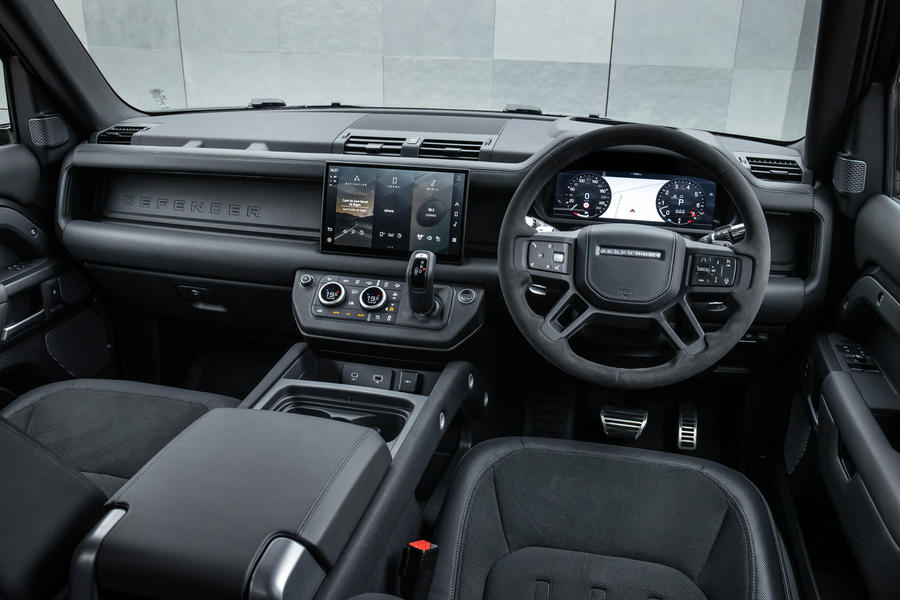 At a few pounds short of a hundred grand (or more, once you get stuck into the options list), the Defender V8 isn't the sensible choice by any means. But it is a pretty lovely one. 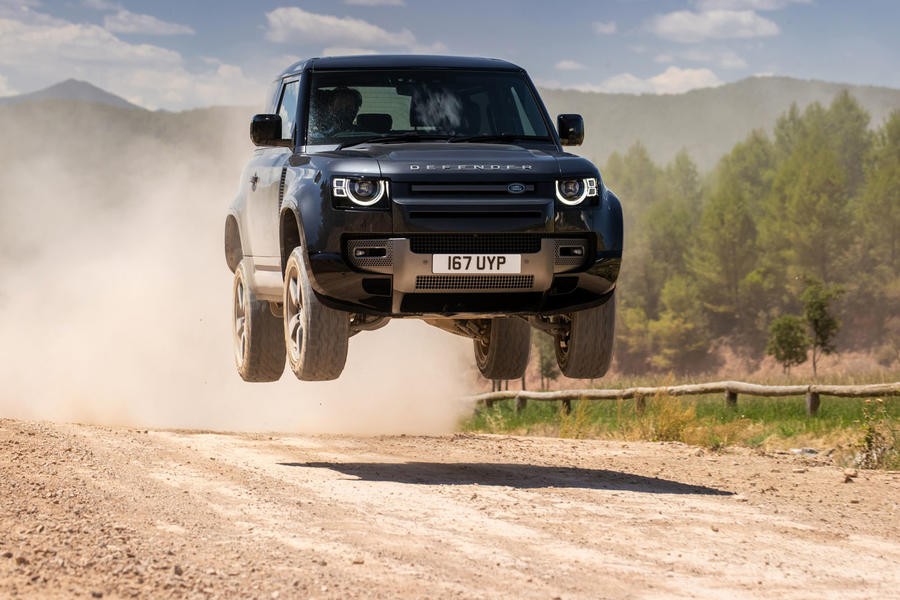 The bile spilled out here is hilarious-get a grip! JLR have delivered one of their most thoroughly engineered vehicles yet (in the UK by a UK team) that moves the game so far on from Disco 4&5 that they knew they could charge more for it. And Range Rover Sport has more common hardware with Range Rover than this has with Disco 5 - and they're still very different propositions. Thankfully Autocar provide a start rating based on attribute merit not social conscience. And the exposed screw are a design feature not a cost saving! If you have the means, enjoy one before they are regulated out of existance.

The wealthy soccer mom's here in South Florida are loving these. So are the tow truck companys!

We are now setting people taking the Defender off-road in extreme conditions, and it is performing,