7
Kia delivers a shooting brake for the masses with sufficient practicality, competent dynamics and attractive styling. The double-clutch gearbox lets it down, though
Open gallery
Close

The Kia Proceed is the third bodystyle to be added to the new Ceed range, following the more conservative-looking five-door hatchback and estate. It’s here in lieu of the old faux-coupé Procee'd three-door.

Kia’s research suggests that station wagon sales will grow over the next few years and be particularly strong for those cars featuring some extra emotion in their design. It predicts a 20% share of overall Ceed sales for the shooting brake, with the five-door and more conventional estate bodies accounting for 25% each, leaving the as-yet-unseen Ceed SUV to make up the remaining 30%.

The Proceed isn’t a shooting brake in the classic sense, in that it’s not an extended-roofline version of a two-door sports coupé, or sold in limited numbers at ridiculous prices. Instead, it's in the same vein as the Mercedes CLA shooting brake. And although the Mercedes wasn’t the sales smash hit that might have inspired a league of imitations, Kia noticed that Mercedes sold it at a 25% premium relative to its nearest rivals and felt encouraged enough to sign off the project and do things differently.

This Kia's bodywork shares nothing but its front wings and bonnet with other Ceed variants. To create the shooting brake silhouette, the Proceed’s designers made the windscreen angle 1.5deg ‘faster’ (or more steeply raked) than that of its sister models and the roofline 43mm lower, while the rear window is raked at almost 65deg off the vertical, making this car look much more like a fastback than a conventional wagon. Overall, it is just 5mm longer than the wagon and its wheelbase and width are the same as other Ceed derivatives'.

There are some interesting styling details, such as the more aggressive-looking front bumper. The rear hatch has what Kia’s designers call a “coast-to-coast” line uniting the LED tail-lights and double exhaust pipes. GT-spec cars have 18in wheels as standard. The only other available trim will be the GT-Line, which comes with 17in wheels.

Kia is sure that buyers of both the Ceed SW and the Proceed will value boot capacity more than rear leg room. The Proceed’s electrically operated hatchback gives access to 594 litres of load space, which is just 31 behind the capacity of the station wagon and includes a rail system to hold bags and boxes in place. It also gets 40:20:40 split folding back seats as standard. The boot aperture is higher and narrower than in the SW, although there’s a good reason for that: it’s one of the reasons why the Proceed has the same torsional stiffness as the five-door hatchback and a 20kg-lighter body-in-white. 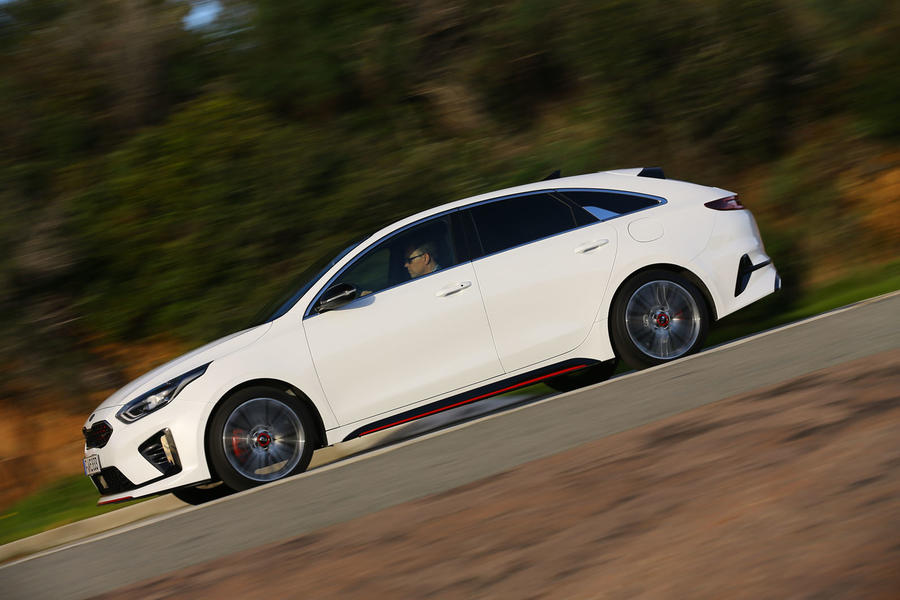 Sit inside and you’ll notice the Proceed’s leather and Alcantara sports seats with red stitching and GT logos. They give excellent side support and feel instantly comfortable. There’s a flat-bottomed steering wheel and black roof lining, both of which make for a sportier ambience. The driving position is no lower than in other Ceeds, but the roof is considerably lower and rear-view mirror visibility is poor.

Rear leg room is the same as in other Ceeds, so it’s generous, but although head room is acceptable, it’s more limited, and getting in and out of the rear seats requires close concern for your scalp.

Fire up the 1.6-litre T-GDi engine and you’ll hear a nice bassy soundtrack with a purposeful edge. Part of this comes from a set of flaps in the exhaust system but most is created by the car’s audio speakers; and although it obviously isn’t the real thing, it sounds close enough.

Albert Biermann, ex-BMW M chief and now boss of vehicle dynamics at Hyundai-Kia, spent six months with his development team fine-tuning the Proceed. And the results are felt over the very first metres of driving this 201bhp GT version. Fitted with firmer shocks and springs but softer anti-roll bars than the old Ceed GT, the car has a ride that processes uneven Tarmac with a sophisticated touch. It feels firmer than any other Ceed but never to the point of damaging on-board comfort. The all-independent suspension keeps tight control of moving masses at all times.

There are two driving modes available - Normal and Sport - which govern the calibration of the power steering, accelerator mapping and shift behaviour of the seven-speed dual-clutch gearbox. But the biggest noticeable difference in the car when you select Sport mode is the increased engine/synthesiser sound produced in cabin. In any mode, the four-cylinder engine feels ready and willing from below 2000rpm, giving its best at intermediate crank speeds, but it starts feeling abused when it gets near the 6500rpm redline. Performance figures have yet to be released but it feels as though they should be pretty strong, and competitive for a 200-horsepower compact family car.

Hurry the Proceed along on some twisty roads, as we did on smooth Tarmac in the south of France, and it resists understeer well and has nice, consistent-feeling steering that gives you most of the information you might need to go faster. Handling is balanced and precise, and if you take your foot from the accelerator at the heart of a corner, you’ll feel the car’s line and attitude both adjust, if only just a bit. Traction is never a problem for the front wheels, with torque vectoring by braking featuring as standard.

This is a car where you take satisfaction from the well-struck balance of the car’s driving experience, which juggles precision and ease of use quite skilfully. Until you mention the double-clutch gearbox, that is.

Kia’s 7-DCT gearbox is an in-house development and is the sort of system that might make you wish Hyundai-Kia had instead simply chosen one off the shelf. There’s no big problem when you use it strictly as an automatic. But when your fingertips start looking for those alloy shift paddles, its performance gets much worse.

Going up the gears is a surprisingly slow process, and when you need a fast downshift, the gearbox is even slower. The unit’s clutches seem particularly prone to slipping, making each downshift feel that it’s going on forever. It rarely concludes a downchange when you need it, sometimes forcing you to enter a corner in the wrong gear. It feels as though the gearbox is protecting itself from the dangers of a sudden 195lb ft hit; which, given that’s not a great deal of torque for a 2018 car, is a puzzling quirk for it to have.

In top-spec GT trim, the Proceed 1.6 T-GDi should offer a well-rounded package, so long as you keep away from the dual-clutch gearbox and go for the six-speed manual instead.

It has more than enough room inside, is wrapped in an attractive body and strikes a fine balance between comfort and driving satisfaction. 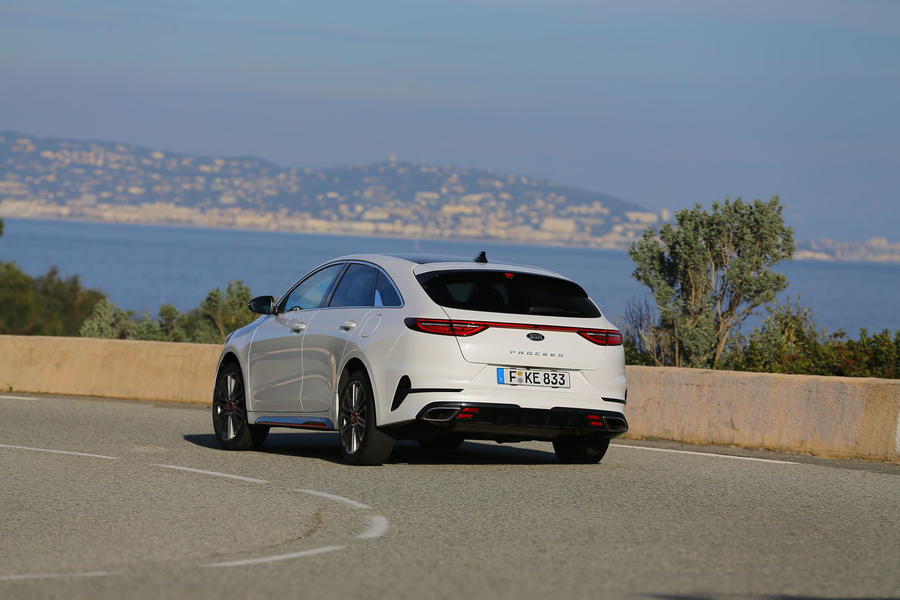 Get rid of that fake engine noise through the speakers.

Why are so many manufacturers persisting with this naff feature?  Is it laziness because they can't be bothered to tune the exhausts properly, like Alfa reputedly did, and might still do?  There's no mention of whether you can switch the wretched thing off.

It’s a little different, and

It’s a little different, and for that I rather like it. Interesting about the predicted rise in estates. I’m about to turn 40 and all of a sudden quite partial to an estate car.