From £17,9307
New Focus is almost as good to drive in estate form as it is as a hatch, but Vignale trim isn’t worth splurging on
Open gallery
Close

This is our chance to get to know the margins of the model range of the fourth-generation Ford Focus.

Although it shares the same wheelbase as the hatchback, the new Focus Estate is significantly longer than the old one, stretching close to 4.7 metres overall, with a rear overhang almost a foot longer than that of the five-door and a boot swollen to 608 litres in five-seat mode (up from 375 litres in the hatchback). Fold the back seats and you can squeeze in 1653 litres of stuff if you load to the roof, while all the usual wagon accoutrements – partition guards, roof boxes, tow bars, you name it – are in Ford’s dealer-fit accessories catalogue.

Vignale trim level, meanwhile, is mostly but not entirely about extra equipment (Focus Vignales also get special grille and bumper styling). There are no meaningful mechanical differences that the badge confers; you get the same suspension tuning as you would otherwise on a mid-range car, with the option of adaptive damping (continuously controlled, as Ford describes it) as long as you’re buying a five-door hatchback without a variable-height boot floor and with either a 1.5-litre turbo petrol or 2.0-litre turbo diesel engine.

Standard equipment over and above that of the next-highest Focus trim level includes items like 18in alloy wheels, a heated steering wheel, a premium audio system, LED headlights, a head-up display, leather seats and LED ambient lighting. That’s not quite the kitchen sink where kit is concerned; you can pay extra still for a panoramic sunroof and wireless phone charging and for active safety and convenience kit, such as a blindspot monitoring system, traffic sign recognition and adaptive cruise control, if you want to.

Given the RRP on the priciest Vignale wagon is above £30,000 before optional extras, however, you might not be minded to tick too many boxes on the order form. The typical premium for a Focus Vignale is £2650 beyond asking price on Titanium X. And a Focus Titanium X isn’t so cheap by mainstream hatchback standards. 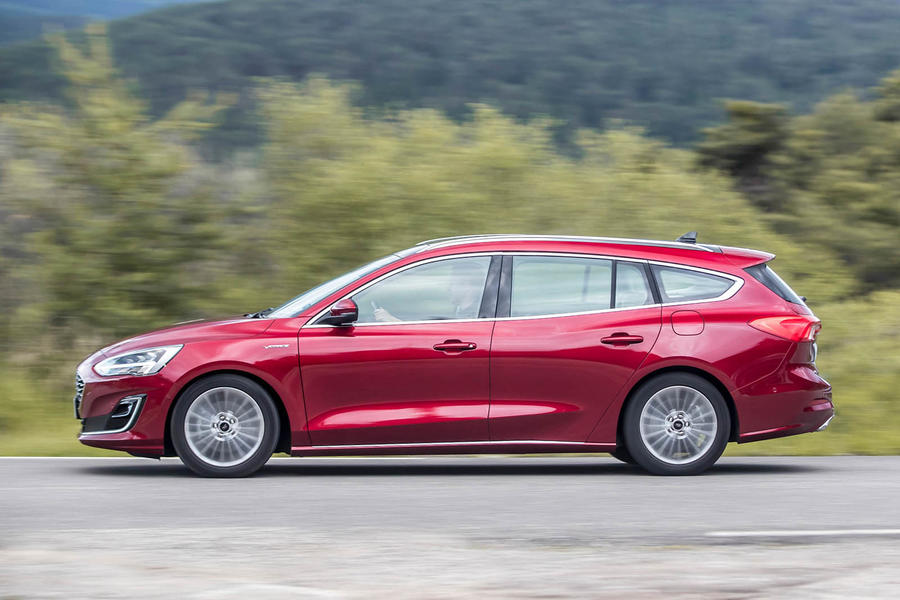 The Focus is one of the last Ford models to get the Vignale treatment – and evidence, in some ways, that the firm is learning how best to execute these added-luxury, premium-priced derivatives with a bit of practice.

Less decorative chrome is used on the Focus’s exterior, which is no bad thing given how uncomfortably it sits on the bigger current Fords. This Vignale is just about well enough distinguished that you can spot the differences up close, but not so keenly set apart that it looks oddly antiquated or incongruous.

The car’s interior touches fail to hit the required material high notes, though, just as they have on Ford’s other Vignales to date. The metallic-look decorative foils of mid-spec Focus derivatives give way to some particularly half-hearted ‘wood’ veneer on the fascia, around which runs a line of unconvincing mock leather stitching for the car’s soft-touch moulded dashboard.

Elsewhere around the cockpit, the Vignale’s real leather trim ingredients are quite nicely handled, but it’s a shame that the car’s leather seats aren’t more comfortable. This tester found the 'sportier’ cloth seats of lesser trims more agreeable over long distances.

The bigger problem for the Focus Vignale, however, is that the car’s fairly workmanlike baseline level of perceived quality would likely undermine any attempt at dressing up the interior. The Focus’ moulded cabin fixtures vary from quite hard and wobbly to softer and more robust, but none really strike you as classy or expensively hewn. The interior ambience is quite dark and monochrome, and its switchgear is smart-looking but doesn’t invite you to linger over the flick of an indicator stalk or the twirl of a heater knob. And so while it might be a pleasant enough car in which to travel, the Focus just doesn’t strike you as classy, upmarket or luxurious; and that’s true with fitted leather or not, Vignale-badged or otherwise.

The boot of the estate version has been made 43mm deeper (between the roofline and floor) and 25mm longer up to the second-row seatbacks than that of its predecessor. As Ford is quick to point out, it will now swallow a typical dog crate, so Amber the golden retriever should approve.

Overall back-seats-stowed loading length, meanwhile, has increased by a hefty 175mm, and the car’s normal five-seater-mode boot capacity has jumped by more than 100 litres to 608 litres in all. That’s 10% more than you get in the Vauxhall Astra Sports Tourer, about 5% more than in the Seat Leon ST. It’s also only a whisker behind the Skoda Octavia Estate.

All Focus Estates come with roof rails and all get a flexible boot floor as standard, the latter sliding back to reveal a storage space that can accommodate the car’s tonneau cover when you need to take it out. The back seats fold very easily, but their 40/60 split leaves the bigger half of the rear seatback on the driver’s side of the car: the wrong way around for optimal through-loading space and versatility of layout, at least as far as most right-hand drive customers will be concerned.

The Focus’s 180bhp, 1.5-litre turbocharged petrol engine has been reviewed on these pages before. It’s motor of a decently rousing performance level, albeit one you might not describe as fast; and one that works keenly and revs cleanly, although it only actually produces 30lb ft more torque than Ford’s top-level 1.0-litre petrol triple – which doesn’t feel like a great deal on the road.

Compared with other upper-level turbo petrol motors available for the money (the Volkswagen Group’s new 1.5 TSI Evo four-pot, for instance, or the PSA Group's 1.6-litre Puretech motor), it operates at something of a disadvantage on mechanical refinement. There’s certainly a background spikiness to the engine’s combustive character that’s a bit out of place in a car of a pseudo-luxury brief.

Along a similar line, the Focus Vignale’s ride is a touch noisy over coarser surfaces and short on isolation judged against the more refined family cars with which it might be reasonably compared. It handles well, just as you’d expect it to. It steers keenly, with a note of rubberiness about the wheel’s initial feel and response the only minor black mark. And it handles in agile, flat, balanced and engaging fashion.

The same can be said of the Focus in any trim level, however, and, on this evidence at least, it’s unclear what, if anything, Vignale adds to the sophistication of the Focus’ driving experience.

Being an estate, our test car did without the adaptive dampers that might have mellowed out its ride a little bit. It remains to be seen how much extra breadth they might add to the car’s dynamic range, then – but whatever they’re worth, we suspect they’ll be more effective on a Focus Titanium X with smaller wheels than the Vignale’s standard 18in rims.

As regards the optional safety and convenience kit you might pay extra for in a bid to make your Focus feel more premium, some of it’s worth having, but by no means all. The dynamic LED headlights of our test car (£425) are fairly bright and seem to be able to avoid dazzling other road users quite well when left on automatic high beam, but their active cornering functionality isn't particularly effective.

The car’s adaptive cruise control, meanwhile, is a little bit slow to detect vehicles up ahead but also too keen to slow the vehicle unnecessarily to the speed of the car ahead in the run-up to a motorway overtake, even after indicating and having begun to change lanes. The lane-centring assistance also tends to let the car wander within the bounds of the lane more than you'd imagine it might. 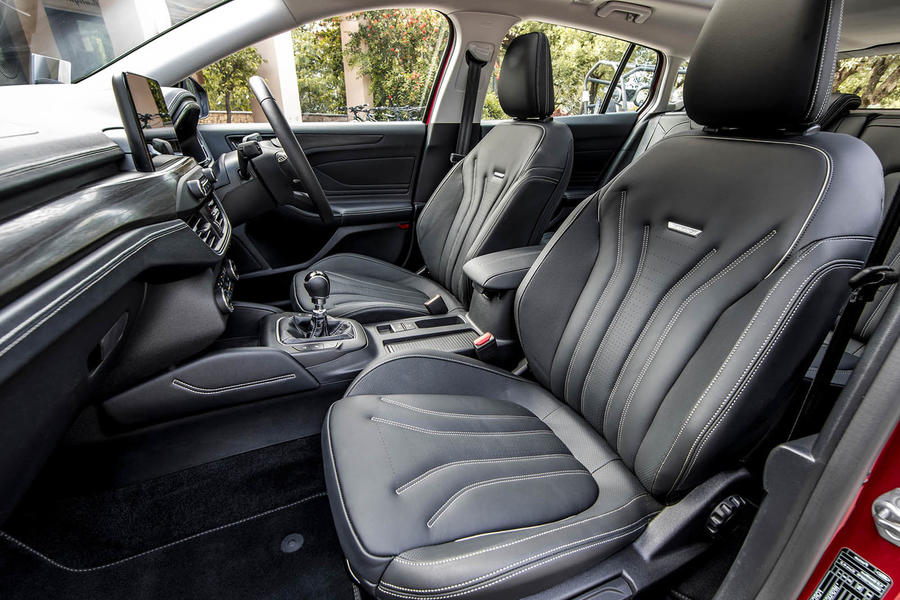 There’s plenty to like about the Focus Estate, but less reason to stretch your budget to take in the car’s top-level trim.

Gaining the carrying capacity to rival any similarly sized option, the Focus Estate now delivers typical driver appeal packaged with very competitive practicality, and the fact that having one means you can’t have the car with adaptive dampers doesn’t seem too much to regret.

Vignale trim level, however, certainly promises more than it delivers. It may be strategically important to Ford to boost the perceived quality and desirability of its cars, but it’s doubtful if the Focus Vignale is a success in either respect. There are plenty of genuinely premium-worthy hatchbacks on the market right now, after all, and, ignoring the ways in which it has always distinguished itself, the Focus isn’t a much closer match for the better ones among them now than it has ever been. 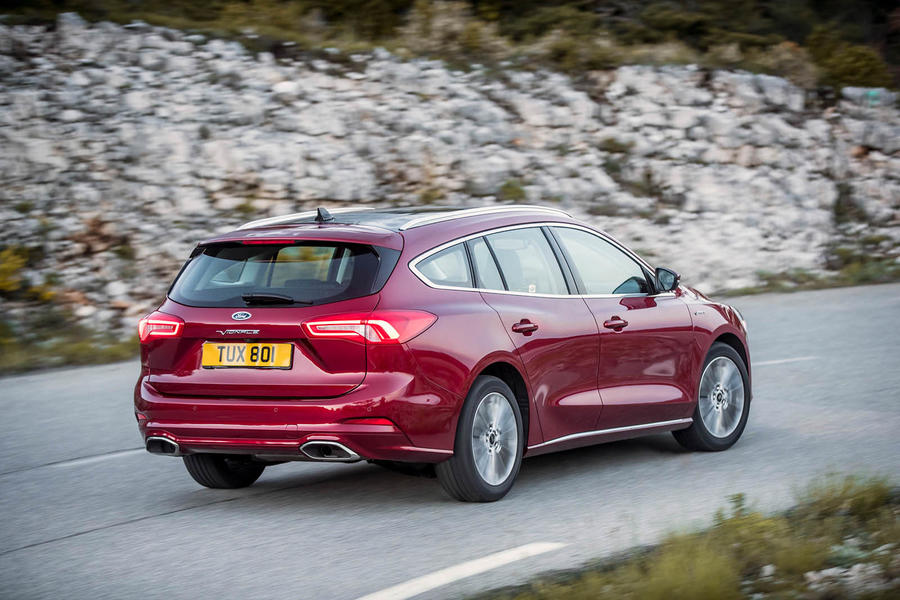 one thing i really hate, are

one thing i really hate, are people that havent even driven one. if you know where to go you can get one with all the extras for £23,000.

unless you have actually driven one you cant give a review on the car.

get a life people

When a manufacturer builds a coupé, they make considerable changes to the styling above the waist.  When they build the estate, they say "Well it still needs four doors so lets just save costs by extending the styling of the saloon.  Yeah that results in useless pinched windows and a droopy top window line that gets separated from the roofline but the punters just look at the kit and I can't be arsed anyway."

Just look at it no2!

Its pretty ungainly from the side profile isnt it?  Huge front overhangs, tapering waistline, chunky rear overhang.  No wonder everyone is buying compact SUVs instead!