From £18,4308
Golf Estate champions usability, practicality and affordability, but is left wanting on the character front
Open gallery
Close

This is the Volkswagen Golf for someone who looks at the regular hatchback and thinks “I could do with a bit more boot space”. The Golf Estate is, for all sakes and purposes, largely identical to its hatchback stablemate. It sits on the same MQB platform, is available with largely the same petrol and diesel engine line-up and features the same solid build quality the Wolfsburg manufacturer has become a byword for.

Where it starts to differ, though, is from the rear doors backwards. The conversion process from hatch to estate has seen the seventh-generation Golf grow from 4258mm to 4567mm in length, with the bulk of that extra metalwork extending out past the rear wheels.

In addition to lending the Golf Estate a boxier side profile, this also contributes to a significant increase in boot space, rising from 380 litres to 605 litres with the rear seats in place. Fold ’em down, and this increases to 1620 litres. Handy.

There’s plenty to choose from engine-wise, too. A 123bhp 1.4-litre petrol represents the base offering, while the 306bhp Golf R Estate sits pretty at the top of the range. There’s also a rugged Alltrack version available. Our test car, however, was fitted with Volkswagen’s new 1.5-litre EVO petrol engine, in 128bhp state of tune.

It’s a relatively new engine from the Volkswagen Group, and has already appeared in the Seat Ibiza and VW Polo superminis. This power plant’s key draw, says Volkswagen, is its blend of power and fuel economy - a claim that is aided by the inclusion of active cylinder management. This enables the turbocharged engine to shut off all four of its cylinders while coasting, contributing to a claimed combined economy figure of 57.6mpg. 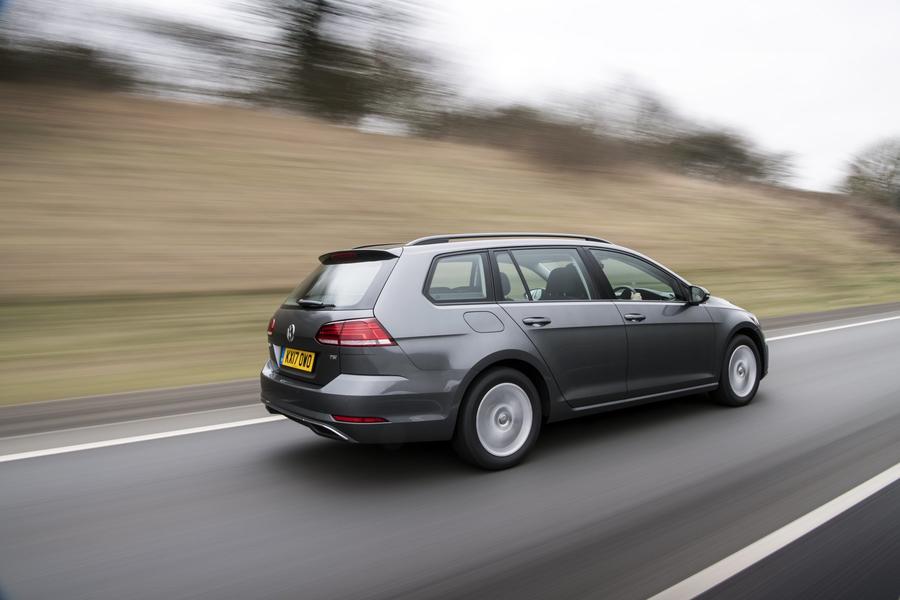 If you were to compare this particular Golf Estate to a curry (not a particularly likely comparison, but bear with me here), it’d have to be a chicken korma. It’s a safe, inoffensive bet that doesn’t really have anything inherently wrong with it. However, next to the likes of, say, a vindaloo - which is obviously the curry world’s equivalent of the Golf R Estate - it’s a bit, well, plain. Dull, even.

But that’s okay - a Golf without a GTI or R badge was never really going to be the sort of car that tugs at your heartstrings, or fill you with a desire to get behind the wheel at every possible opportunity. To criticise the Golf Estate for its lack of character would be a touch unfair.

And anyway, the fact that it’s not particularly exciting doesn’t make it a bad car by default; there’s still plenty to like about the Golf Estate. The 1.5-litre EVO engine accelerates smoothly, and is quiet and refined at cruising speed. Its 148lb ft of torque is available from 1400rpm, although it’s at its most responsive from about 3000rpm. Coupled with Volkswagen’s six-speed manual transmission - which is positive and direct in its action - it makes for a car doesn’t require a great deal of effort at all to drive smoothly both in town and out on the motorway. We managed to average about 50mpg with it, too, so it’s not too far off VW’s claimed 57.6mpg economy figure either.

Forward and rearward visibility are excellent, while plenty of adjustability in the seat and steering column (it’ll accommodate changes in both rake and reach) make finding a comfortable driving position a doddle. There’s little to complain about in terms of rear leg or headroom - even with the £995 optional panoramic sunroof fitted to our test car - and there’s no real boot lip to speak of.

The cabin is a touch drab, but well screwed together and controls for the air conditioning and infotainment systems are sensibly laid out. Speaking of infotainment, this particular car made use of Volkswagen’s 8.0in Discover Navigation system, which is one of the best on the market owing to its graphics, responsiveness and ease of use. The £495 Active Info Display is a nice touch, too, replacing the traditional analogue instrument binnacle with a 12.3in high-resolution display. This can be customised to show a range of different information, including the sat nav map.

The Golf Estate generally rides well, with only sudden ruts or particularly poorly-surfaced roads causing it to jitter about. Body roll is well contained through bends and there’s plenty of front end grip, although steering that’s largely devoid of feel might dissuade you from properly pressing on when on a challenging section of road. Sport mode weights the rack up nicely, as it errs towards being a bit too light in the default driving mode. 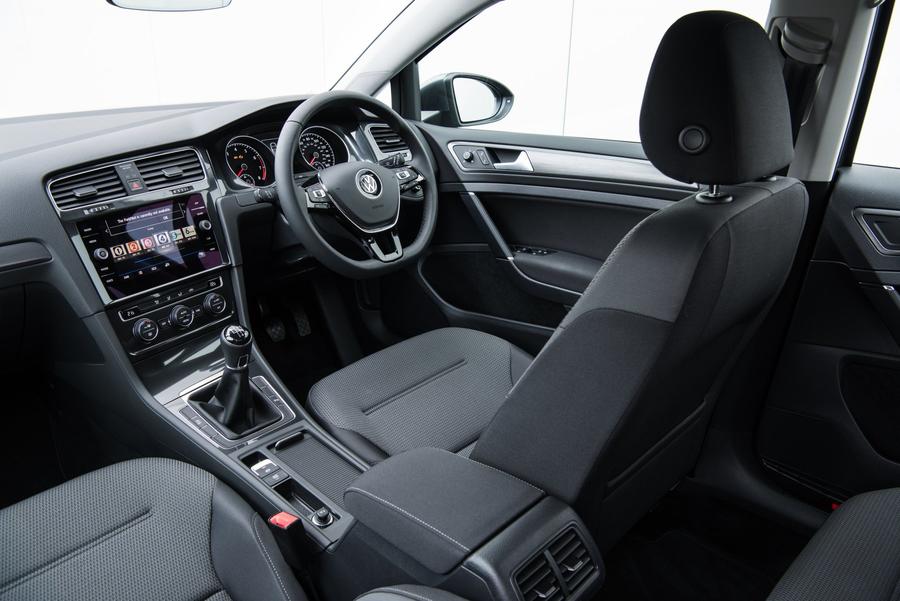 As a no-nonsense family runabout, there’s a lot to commend the Golf Estate. Not only is it incredibly easy to drive and plenty practical, it won’t break the bank at the fuel pumps either.

Our generously-equipped SE Navigation test car starts at £23,305, so it’s affordable - although a comparable 1.5-litre Skoda Octavia Estate does undercut it by a just over £2000 - and our experts predict that it’ll retain 43% of its value after 36,000 miles and 36 months of ownership, pipping the Skoda by a mere 1%.

That it’s not particularly exciting to drive is unlikely to be a concern for anyone seriously considering forking out for one. For those buyers who want to combine the Golf Estate’s impressive practicality without missing out on proper hot hatch performance, though, it pays to remember you can also have one in 306bhp, R guise. Just be prepared to part with close to £35,000 for the privilege. 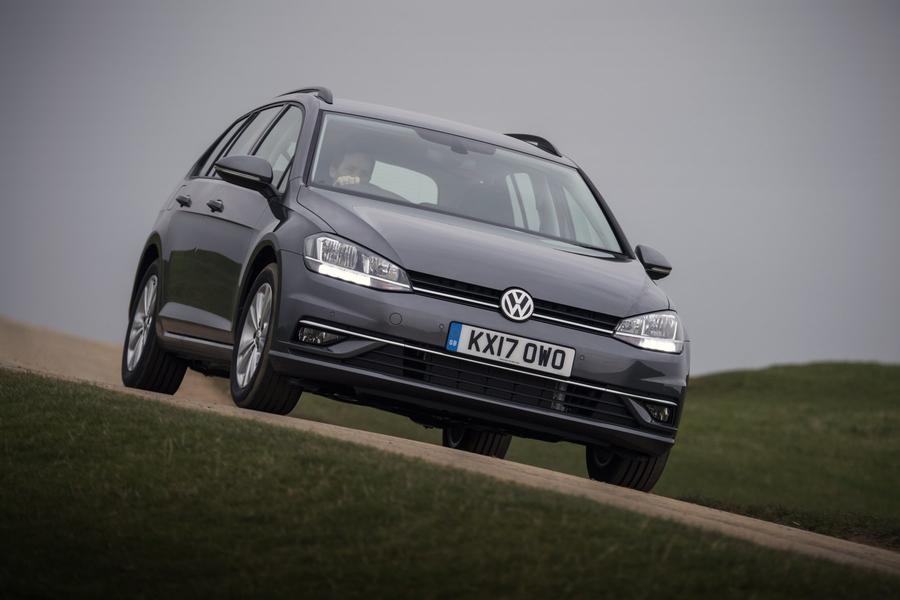 £23300 for this? No wonder car sales are falling. The SMMT can blame Brexit as much as it likes, this is the real reason for new car sales tanking!

I had to chose between a Golf

I had to chose between a Golf or Octavia estate earlier this year. (R was too expensive to own). Both boring looking cars but the Octavia won it for me. That would have been different tho if VW had stuck their 1.4tsi in GTD trim - the std petrol GT was so drab by comparison.

There is another factor tho, Passat. Forget about list prices as it's real-world prices I'm concerned with and believe it or not, a 1.4tsi GT Passat estate which was much better equipped (sunroof, digital dash, hands-free locking etc, push button start etc) than the 1.4tsi GT Golf yet WAS CHEAPER TO BUY !!!!  Golf was £21.5k from a broker where Passat was £21k.

As for those who complain at this 4* car just because it has a VW badge...  I'd give it 5* because it does nothing wrong. Few if any other brands can live with it as an all-round car.