BACK TO ALL NEWS
Currently reading: 2019 Kia Proceed UK prices and specifications revealed
UP NEXT
New Land Rover Defender V8 gets 518bhp and bespoke styling

Shooting brake estate will go on sale in the UK on 21 January, with a warm GT variant offered from launch
Share
Open gallery
Close
Share story

Kia has announced UK prices and specifications for its new Proceed five-door estate, available in the UK in three trim levels from 21 January from £23,835.

The range-topping Proceed GT, available from £28,135 and equipped as standard with the automatic gearbox and 201bhp 1.6-litre turbocharged petrol engine found in the Ceed GT hatchback, is capable of a 140mph top speed and 7.2sec 0-60mph time. Visual differentiation from the rest of the range comes in the form of red centre caps and trim, alongside LED bi-function headlights. The interior features sports seats finished in black leather and suede with red stitching.

Designed, developed and engineered in Europe, the sole continent in which it will be sold, the Proceed shares much visually with the five-door Ceed hatchback from the front doors onwards. But it’s all change from there back, with a roofline that slopes down to a steeply raked rear window and extended rear overhang.

The rear profile is also unique, with a single-piece LED lightbar stretching across the tailgate and a more aggressive bumper design. Chrome ‘Sharkblades’ in the rearmost side windows are said to emphasise the roof angle.

The Proceed is 5mm longer than the regular Ceed Sportswagon estate, at 4605mm, with a 43mm lower roofline and 5mm taken from the car’s ground clearance. The 2650mm wheelbase is unchanged. 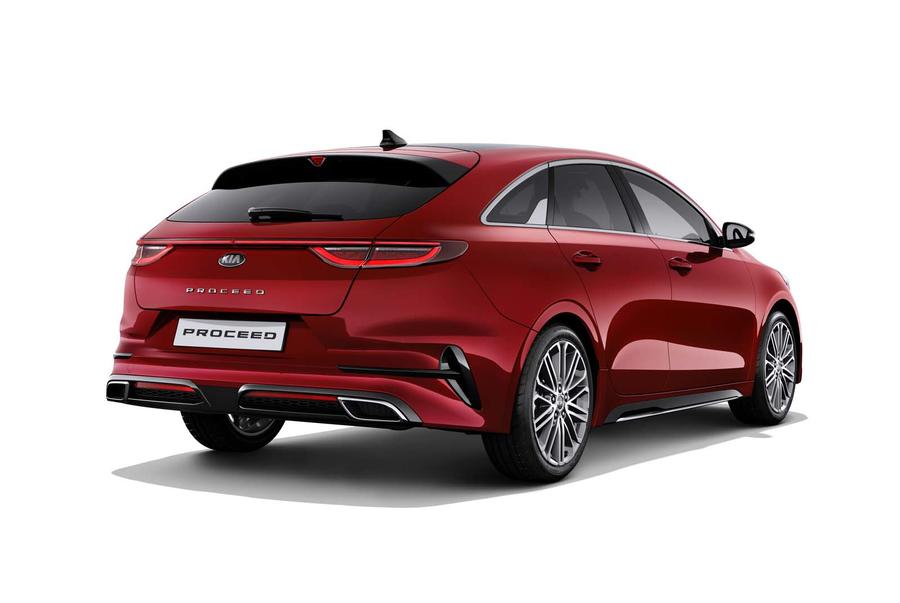 Little has changed to the front passenger section of the Proceed’s interior, save for a new black roofliner, new sill plates and revised front seats with thicker bolsters.

In order to offset the head room sacrifice of the lower roofline, the Proceed’s rear seats have been mounted lower down. The shape of the car's rear end means it loses 32 litres of boot space compared to the Sportswagon, at 594 litres. An electric tailgate and 40:20:40 split-folding rear seats are also included.

The Proceed gets the same fully independent suspension as its siblings, but Kia claims that it has been set up in a unique state of tune for better body control and a more responsive feel. Stiffer front and rear springs take care of that, while softer anti-roll bars help boost traction under hard cornering.

After the acclaimed Stinger, Kia sneaks into ‘compact premium’ territory

Albert Biermann on why Hyundai and Kia are performance car ready

Just seen a video of this on AutoTrader's YouTube channel (who seem to actually understand the importance of video content... hint hint AC) and it looks much better on film than it does in these rather static CGIs.

I think this looks great and much better looking than the hatchback. I have to say I thought when I seen pics of the hatch at first I thought it was very bland but it looks much better in the metal. This looks like a Mercedes from the side and a Porsche from the back so whats not to like.  Still a pity there will be no 3 door or coupe version of the CEED do.

Its a*se is too fat, sadly.

Its a*se is too fat, sadly.