Why we’re running it: The Jaguar saloon is endangered. Can an updated XF leave a lasting legacy? 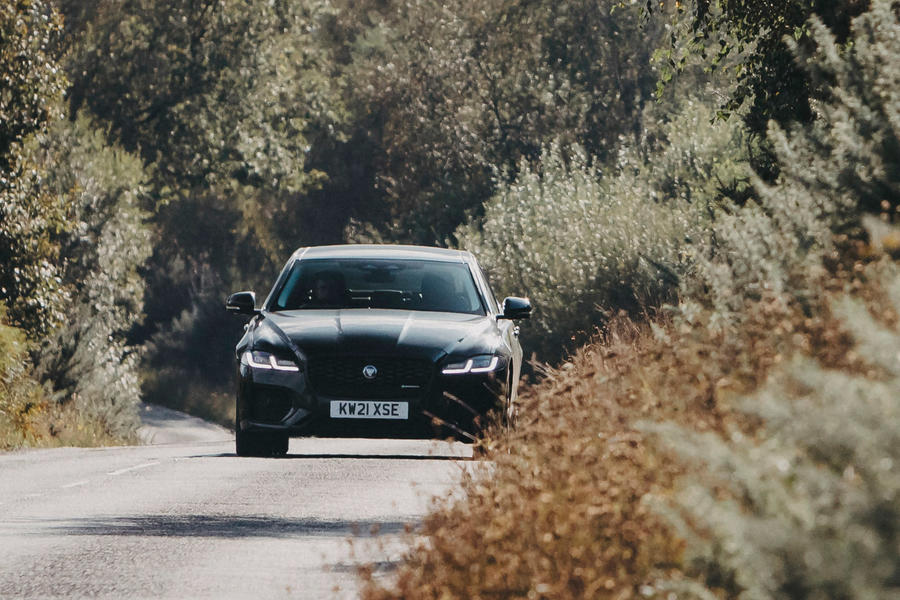 Life with a Jaguar XF: Month 1

Going all-electric: it’s rather the done thing at the moment. Everybody is doing it, from Alfa Romeo to Alpine and Vauxhall to Volvo, and those companies that have yet to unveil their bold plans to ditch combustion over the coming decade are starting to look more than a little bit unfashionable.

We have had a good few heavy-hitting headlines over of the past few months on this very subject, among the earliest and most impactful of which was ‘Jaguar to become all-electric brand from 2025’. Other manufacturers will beat them to the punch, of course, but here is a name so intrinsically associated with big-engined sports coupés, snarling race weapons and driver-orientated saloons that the concept of a completely engine-less build hall at Castle Bromwich seems almost unimaginable.

In the meantime, this particular new XF, as you’ll no doubt have clocked, is categorically not electric. Not even electrified, actually, for while Jaguar does already sell plug-in hybrid versions of its F-Pace and E-Pace SUVs (and, of course, the all-electric I-Pace), its struggling XE and XF saloon models continue as combustion-only propositions, albeit with the option of a mildly hybridised diesel engine, while nearly all mainstream rivals are capable of zero-emission running.

So can the XF, as the flagship of Jag’s modern saloon line-up, remain a competitive option in what is already a dwindling segment? It’s the right time to ask. The XF might be the final full-sized, fuel-burning saloon Jaguar will ever produce, but it has also just been extensively updated both inside and out and is actually quite a different proposition from the outwardly similar pre-facelift car. 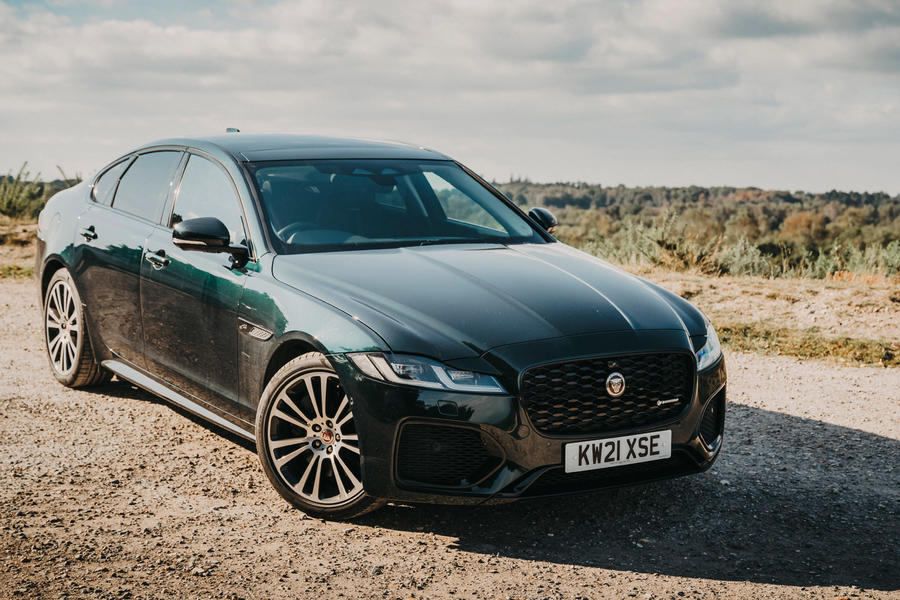 We’ve gone for the mid-point of the line-up in the form of the 248bhp P250 petrol engine, which stacks up neatly stat-wise against the BMW 5 Series 530i and Audi A6 45 TFSI: 0-62mph in 6.9sec, a top speed of 155mph and a combined 35.2mpg. Fanatics will no doubt still bemoan the absence of a straight-six engine, but the turbocharged four sends ample grunt rearwards (the right direction) through a slick-shifting automatic gearbox, and the chassis can still offer up a passable impression of a semi-sporting GT in the twisties. And there’s no denying the presence this car exudes at the kerbside.

The visual and technical changes are no doubt extensive and effective enough in their own right to cause at least minor headaches in Munich, Stuttgart and Ingolstadt, but really it’s the revised pricing structure that could most tangibly punt the XF back towards the top of the fearsome exec express segment. Just £33,975 gets you into Jaguar’s biggest saloon these days. That’s the price of a Volkswagen Golf R-Line with a few extras or, perhaps more relevantly, around £5000 less than a 5 Series or a Mercedes-Benz E-Class. And it’s not like it could ever be considered the lesser option materially; if I may be allowed to defy Autocar convention in offering a cliché, it really is a huge amount of car for the money.

The car you see here, admittedly, is specified in racy R-Dynamic trim and comes with a fair few option boxes ticked – to the tune of just over £5000, actually – so we’re not running the true bargain of the class. But that recent round of updates for the XF has freshened it up sufficiently to satisfy this ‘owner’ of its value for money even in higher-specification forms. There’s a fresh new front end with slimmer headlights and a redesigned grille,a chunky (but primarily decorative) diffuser at the back and, crucially, a totally overhauled cabin. 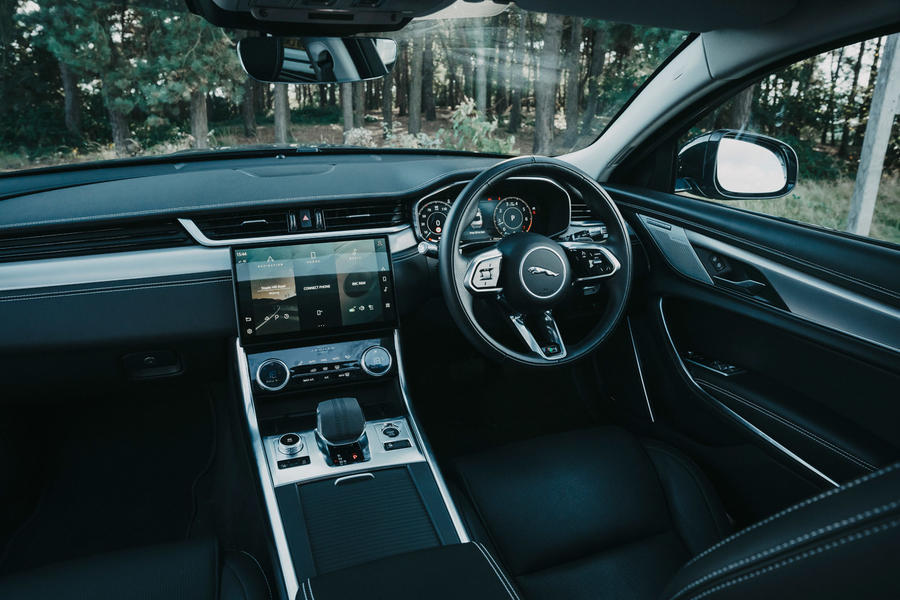 Gone are the plasticky trim elements and old-fashioned buttons, replaced by a minimalist and plush set-up that visibly links the XF with its futuristic I-Pace sibling. Most obviously, the often lambasted integrated infotainment screen from the older car has been swapped for an expansive 11.4in touchscreen that plays host to nearly all of the XF’s key functions, using Jaguar Land Rover’s new Pivi Pro operating system.

And what a system it is. All too often do car manufacturers seem to confuse quality and utility when designing infotainment interfaces these days, but even after some 1500 miles behind the wheel, I’ve yet to encounter any of the clunkiness or counter-intuitiveness that plagues so many of its rivals’ digital architecture; the overall finish and functionality of the system belies the XF’s low list price. There’s more than a whiff of Tesla about the overbearing touchscreen – for better or worse – and a shift away from physical buttons does increase the potential for distractions while driving, but this surely will be the most instrumental material factor in any sales increase the XF manages to achieve in what time it has left.

Well, it’ll be that or the attractive notion of owning a bona fide British sports saloon (What? It’s British Racing Green, isn’t it?) for a relative pittance. Either way, there are thousands of reasons why the German stalwarts dominate in this segment, and the XF won’t have it easy in proving it can win out.

Facing a long drive from Brighton to Sheffield, I bit Felix’s hand off when he offered to swap my Mini Convertible for his big Jag saloon. Comfortable and very refined it proved, the new infotainment is ace and it did about 40mpg – decent for a petrol. Suffice to say that I arrived in high spirits. 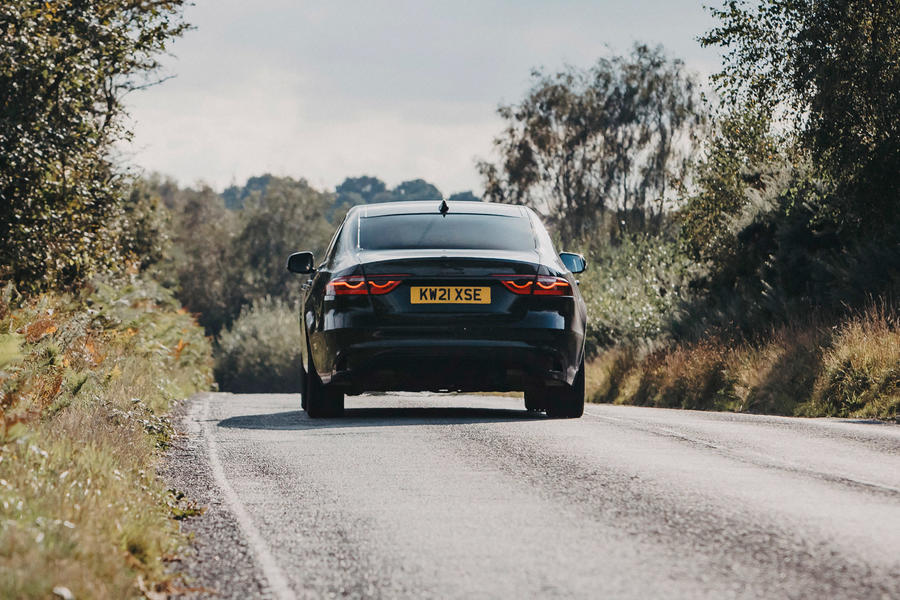 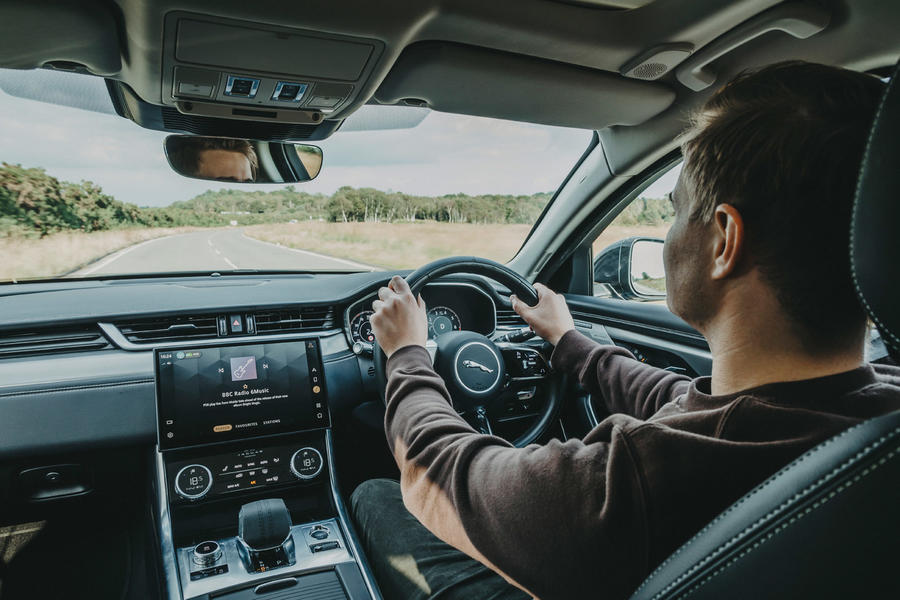 The XF was a very nice car,in fact class leading for when it was launched in 2007, and for at least 6 years pretty much kept Jaguar in profit on its own. I owned two and they felt classy and special.

Unfortunately, that was 14 years ago. Facelifts, tech and material updates, have been slow in introduction and cannot alter the basic outdated engineering. Ingenium engines are actually worse than the ones it was launched with, and packaging, weight and visibility issues still remain.  Additionally the shape, once a major selling point, now looks familiar and dull.

Add in the high purchase price, only recently officially reduced to a realistic level and depreciation worse than any competitors product, and you have the mish mash that you see here. A massive problem now for JLR to re-imagine and very possibly heralding the end of the Jaguar saloon.

How weird. Only seems a few weeks ago I read that Autocar introduced the almost defunct Mondeo on to it's fleet and now they've introduced a car that not only have they already tested to death, a car the public no longer buys. The company car driver certainly no longer buy this dinosaur as it's far too costly to run.

But where is the style - in profile it looks like the photo-fit of a car without any individuality or character - and where is the 'Jaguarness'?

The interior may have improved ergonomically but again it looks like a photo-fit with bits assembled from the standard parts bin. And why is the centre console so wide thus narrowing the footwell?